Trending
You are at:Home»People»Collingswood Installs Communication Board at Knight Park for Non-Verbal Visitors

Local families raised funds to cover the cost of obtaining and installing two of the adaptive communication devices. The second installation site has not yet been determined. 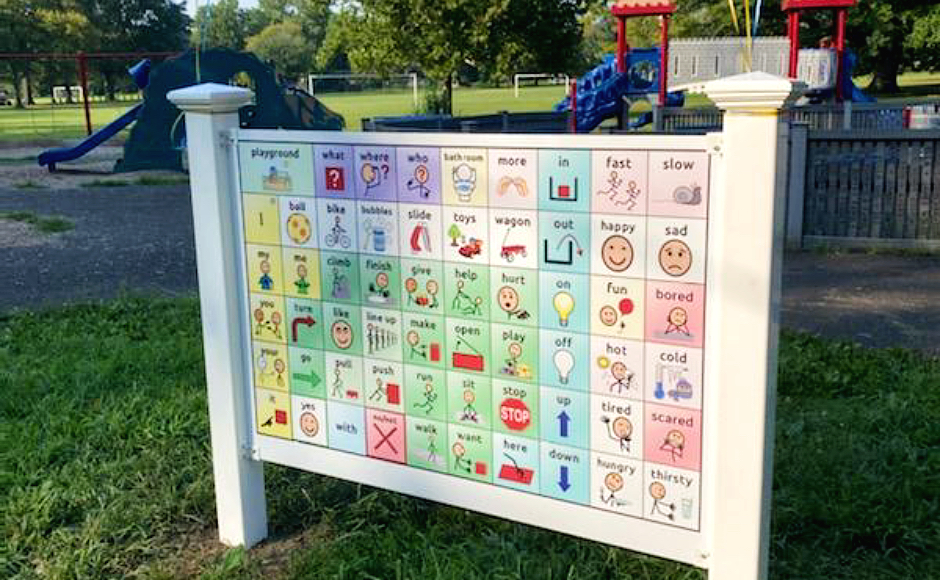 The communication board in Knight Park contains images for a number of words and phrases that nonverbal people commonly use. Credit: Lindsey Ferguson.

Visitors to the playground at Knight Park in Collingswood may notice a new installation there this week.

Right next to the see-saw and off to the side from the preschool play area sits a broad, brightly colored board.

It’s filled with nearly 60 different words and phrases, accompanied by images depicting each.

And for Lindsey Ferguson of Collingswood, mother to four-year-old twin boys Elliot and Niall, it represents the culmination of a three-month effort to help kids like hers have an easier time expressing themselves in a public setting.

Ferguson’s children are autistic, and often rely upon alternative methods of communication to make themselves understood. When Ferguson enrolled her boys in speech therapy, she learned more about these alternatives, as well as how few accommodations for non-verbal people often exist in the larger world.

Traditionally, therapies for non-verbal people have focused on eventually enticing them to speak; more recently, however, that focus has shifted to understanding non-verbal communication tools as an intermediate step to speech. A broadening understanding of the need for these kinds of accommodations in the world around them is increasingly important for her sons’ development, Ferguson said.

“Our society is just not set up for people who use other methods to communicate,” she said.

One such adaptation is an AAC, or augmentative and alternative communication device. Like the picture board in Knight Park, AACs display arrays of images and associated words that a non-verbal person may use to make themselves understood simply by pointing at them.

Ferguson said her children have made significant progress in their speech and language therapy with AACs, so when she saw that some communities were installing them on public and school playgrounds, she started exploring what it would take to bring one to her hometown of Collingswood. 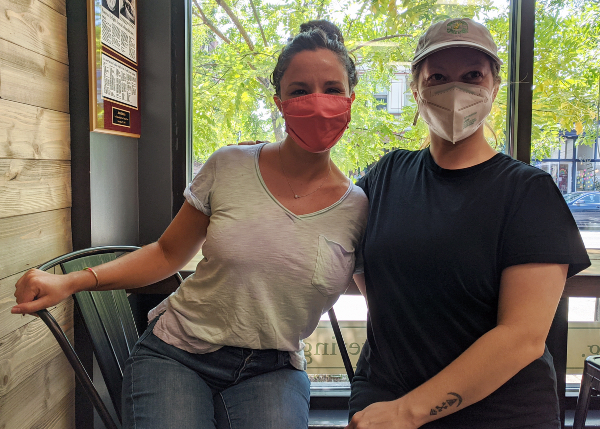 Following a blueprint from the New Jersey Speech-Language-Hearing Association, Ferguson and speech and language pathologist, Molly Cervini Benovic, at Eat Play Learn, LLC of Collingswood, began to roll out a fundraising campaign to install an AAC in Knight Park.

“[Molly]  jumped right in for those kids; didn’t give it a second thought,” Ferguson said.

“A couple weeks later, we had a fundraiser going, and by the next morning, we had enough money to source two communication boards,” she said.

Cervini Benovic said the playground board uses core communication techniques, and features symbols with which children who use AACs will be familiar. It includes pronouns, verbs, and a variety of nouns, including the words and symbols for playground equipment, as well as “social language” for feelings and emotional states.

“Kids in the autistic community like to have things concrete and the same all the time,” Cervini Benovic said. “That predictability is very important. That symbol always means the same thing to them, whereas a word can have different meanings in the world.

“Every phrase connects with universal symbols for that vocab word or feeling,” she said. “It allows them not only to say what they want and need, but to construct sentences.”

Both Ferguson and Cervini Benovic see the communication board as one more piece of adaptive equipment on the playground, which already offers accommodations for users with physical limitations. Having another device for non-verbal or pre-verbal visitors makes the playground all the more inclusive.

“My hope would be that kids in the community—whether they are verbal, or nonverbal, or speak a different language than their peers and caregivers—can use it as a way to express their wants and needs to whomever they’re engaging with on the playground,” Cervini Benovic said.

“A neurotypical kid could easily use the device just the same as another child who can’t verbally communicate,” she added. “It could be for a two-year-old who’s just not talking yet to tell their parent what they want on the playground.

“The point of picture communication is meant to make communication natural and easy,” Cervini Benovic said. “When something’s difficult, we give up really easily. This just gives them a new tool to be able to do that in an easier, more natural way, without frustration.” To Collingswood Commissioner Rob Lewandowski, the communication board reflects the responsiveness of his community to an issue of equity, and the ways in which productive solutions can be found in grassroots efforts.

“I saw a great opportunity shared with me by residents who cared and were willing to do the work and engage folks,” Lewandowski said.

“Public Works put in the footers and helped install it, but otherwise this was a community effort,” he said. “As much as there was a role for the borough in seeing the value in this and seeing how we can help, ultimately, they led the charge.

“This is an example of what equity looks like,” Lewandowski said. “It just speaks to what a great community we are, and that people care, and that good things can happen when we work together. We’re all going to benefit from it.”

For Ferguson, whose sons will be among those to benefit most immediately from the communication board, it represents the culmination of efforts to champion not only accessibility in her town, but the value of play in early childhood development.

“Play is so important for kids’ learning, and it’s not always realistic for a kid to have an electronic AAC device, or a book of words on them when they are trying to run around the playground and just be themselves,” she said.

“It also helps little kids know that it’s normal and okay to not use your voice, and to see other kids communicating that way,” Ferguson said.

“They’re going to grow up with that example as just a part of their lives.”