A preliminary discussion among local leaders from both districts focused on key issues for each, while new numbers from the county superintendent showed ways to neutralize the tax impact.

For months, the borough of Oaklyn has contemplated the fate of its financially strapped public school district, which, despite its tight administrative integration with the neighboring Collingswood Public Schools, is projected to run out of money in a few years.

One possible solution to this issue is the merger of the two districts, either in full or in part, a recent study of which was conducted by Interim Camden County Executive Superintendent C. Ann Volk.

(To read NJ Pen’s examination of the report, click here.)

Volk’s assessment, in turn, served as the springboard to further conversation last week, when a number of key local leaders gathered for a closed-door session to weigh their options.

According to Oswald, the NJDOE was on hand to take questions from the group, with answers likely expected before the holiday break.

Specific issues on the table ranged from debt service (Collingswood is carrying some $1.28 million; Oaklyn has none) to fund balance (at $32.04 million, Collingswood’s is about five times stronger than Oaklyn’s $7.411 million) and the impact to teachers of aligning their contracts within a merged district (Collingswood’s salary guide is higher, but Oaklyn teachers enjoy richer health benefits, Oswald said).

One of the clear messages delivered “with everybody in the room,” Oswald said, is that Collingswood is not obligated to overextend itself financially to rescue the Oaklyn school district.

“In this instance, Collingswood’s not the town with the problem,” he said.

Hope for a ‘tax-neutral’ solution

In recognition of that, the office of the county superintendent worked up new budget figures that Oswald described as “an attempt to make the entire thing as tax-neutral a possible.”

Although the first draft of Volk’s report had advocated for a 50-50 split of the school tax burden among student enrollment and equalized property values in a merged district, her office recently drafted a revision based on a 70-30 enrollment/property value split, which Oswald described as more favorable to Collingswood.

Based on 2014-15 figures, the 70-30 split “would have no impact on the Collingswood taxes, and the Oaklyn taxes would drop about $2,000 across the entire district,” according to Oswald.

“That certainly has a much greater appeal for everybody,” he said.

Oswald also pointed out, however, that the new scenario was based on conditions within the district during the current fiscal year, and could be subject to change based on several factors.

A more rigorous examination would consider “what could happen down the road,” including whether a combined district would have the authority to adjust the balance of those percentages to maintain a tax-neutral impact across the boroughs in subsequent years.

Most stakeholders are primarily concerned with the financial impact of any merger of the Collingswood and Oaklyn school districts, but Oswald believes that unifying the student populations will improve the quality of education offered “across the board” (although, he conceded, “I don’t know that everyone agrees with me on that.”)

“I believe that my position is based on data and evidence,” Oswald said. “I think other people’s positions may be based on home rule.”

The districts already share a number of services and curricula that are quite similar, “but I do believe we can go even further,” the superintendent said.

“I think the huge positive for the Oaklyn kids [is]to be part of a larger group and take advantage of the extracurricular activities that they have here [in Collingswood],” Oswald said.

Although Oaklyn students currently join their Collingswood peers by high school, he said that a one-town, one-team approach would help build students’ morale from elementary school and through middle school, and called any sense of hometown individuation “an adult thing” of which school-aged children would likely be unaware.

“I think when they come out through the same system, there’s not as big of a difference,” Oswald said.
“It would be nice to have the kids know that they’re in the same system starting out.” 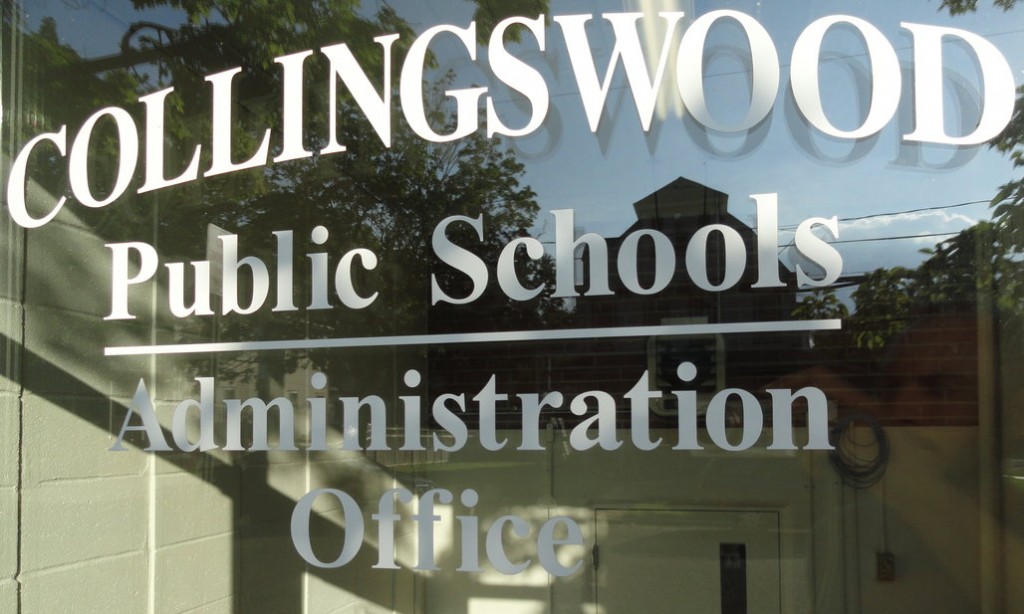 Politically, a unified school district would mean something of a change to the local leadership of the school board, as well. Presently, the Oaklyn and Collingswood boards of education have 19 members between them (Oaklyn BOE President William Stauts sits on both bodies).

A new governing body would shrink to 11 members: one from Woodlynne, and a mix of ten others from Collingswood and Oaklyn.

Oswald said the general assumption is that the first 10 members appointed would be chosen from among the current rosters of each board, which would likely still hold staggered elections for as many as three seats annually.

Another consideration not to be dismissed lightly in future plans for a unified district is the labor negotiations to follow. Aligning the salaries and benefits of two local education associations and considering which staff would be lost in attrition is “a huge deal,” Oswald said.

The next steps for each of the boards, Oswald said, is “to decide what they really want.

“I think people need to separate the this-is-how-it’s-always-been piece versus what’s best for the kids,” the superintendent said.

“The academic outcomes and the educational quality things we can offer to the kids outside the classrooms should be our focus, and if everyone decides that’s the focus, how can we make that happen?

“Our hopes and dreams versus reality needs to be brought back together,” he said. “Once we figure out what we really want, then we can hit the money part and figure out ‘Is it really worth it?’”

Both sides will return to camp to sort out their feelings on the proposed merger, but there is a definite expiration date on any deliberations.

Although Oswald said that the Oaklyn school will have “a strong few years ahead where there aren’t going to be any foreseeable [financial]issues,” on its present course, the district may run out of money by the end of the 2017-18 fiscal year.

“We’ve done a few things that might buy us a little more time,” Oswald said, “but I also don’t know that it’s healthy or good to wait. Nobody wants to go to work every day wondering ‘what’s going to happen to my career a couple years ahead.’”

Prospective figures for a 1 percent increase to a unified Collingswood/Oaklyn school budget on a 70-30 split. Credit: C. Ann Volk.

Prospective figures for a 2 percent increase to a unified Collingswood/Oaklyn school budget on a 70-30 split. Credit: C. Ann Volk.