Trending
You are at:Home»Schools»Collingswood»Collingswood Parents’ Two-Year Quest for a Preschool Playground Heading Toward Resolution

Since it opened, the Collingswood Early Childhood Education Center at First United Methodist Church hasn’t had a playground. After two years of asking for one, parents are frustrated by the lack of progress. 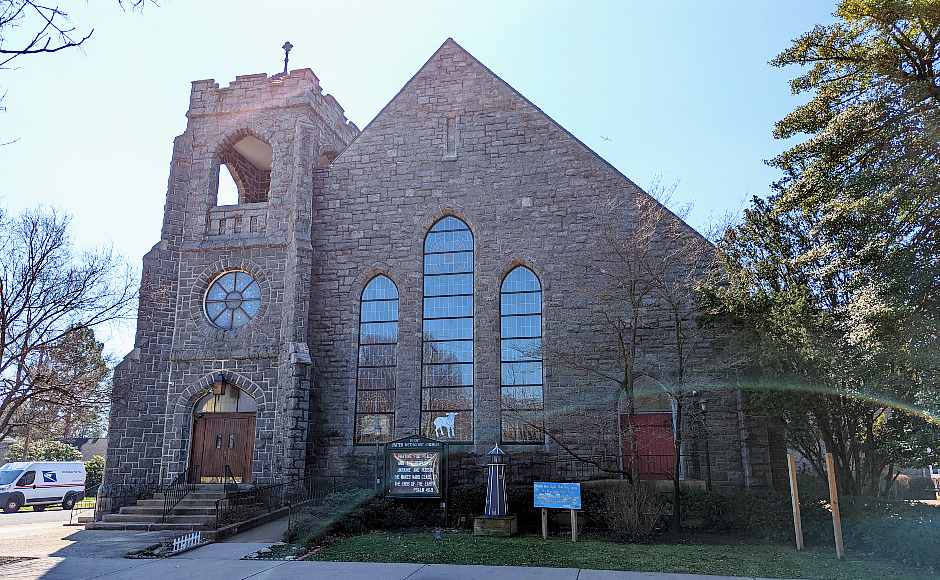 Since the Collingswood public school district began operating its preschool program at First United Methodist Church (FUMC) of Collingswood in October 2020, parents have been waiting for the property to create an outdoor playground for their children there.

The church site is the only of the four Early Childhood Education Centers (ECECs) in the district not to be housed at a public school with an attached playground.

That might not seem like a deal-breaker, but for developing children, age-appropriate play structures provide an important mechanism for improving gross motor skills and the beneficial exercise associated with active play.

Among other features, the New Jersey Department of Education (NJDOE) preschool teaching and learning standards describe “an inviting and supportive learning environment” as one that provides “space and opportunities for solitary, parallel, and small- and large-group play, indoors and outdoors, and in view of an adult.”

When the first crop of three- and four-year-olds to attend the program at FUMC began their education there in 2020, the playground question took a back seat to the general upheaval that battered New Jersey public schools during the novel coronavirus (COVID-19) pandemic.

But as the program (and the pandemic) entered its second year, and outdoor activities became a greater priority for everyone—especially children too young to be vaccinated against COVID-19—families began asking more questions about the status of the playground.

Preschool parents like Collingswood resident Kim DeShayes say they’ve been frustrated by the conflicting communication that circulated throughout the process. DeShayes is one of nearly two dozen families who began corresponding with staff at the Center about the status of the playground at the outset of the 2021-2022 school year, and who say they’re largely dissatisfied with the answers they’ve been given. 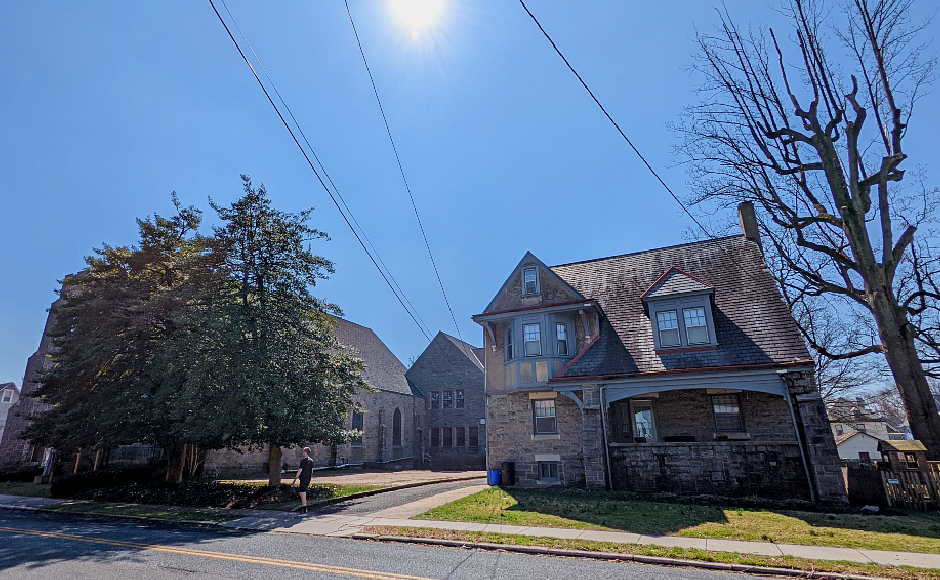 Collingswood First United Methodist Church maintains a beach volleyball court between the church and the house it owns next door. Credit: Matt Skoufalos.

In a September 8, 2021 parent meeting, DeShayes said FUMC building leader Jennifer Floyd told families that delivery of the playground equipment had been delayed by logistical issues related to the pandemic.

DeShayes said Floyd also told parents that despite the lack of a playground, their children would still participate in outdoor learning activities elsewhere on the church grounds.

They had believed that an area of the grounds that had historically functioned as a beach volleyball court would be used for that purpose until the equipment was delivered.

In a September 21, 2021 e-mail, DeShayes asked Floyd, “What needs to happen for the area designated for the playground to be cleared and prepped and fenced in?”

Floyd responded by phone that the district already had obtained the fencing and materials necessary to install it, but couldn’t prep the grounds because that work was to be done immediately prior to installing the playground equipment, which hadn’t arrived yet.

Neither did staff at the Just Kids wraparound child care program, which supervises children before and after the preschool day at FUMC, take the children outside to play, DeShayes said, citing the lack of a fenced-in play area at the church grounds. That meant that some kids, including hers, went days without playing outside, while their peers throughout the district took advantage of good weather to utilize their playgrounds, as reported in district correspondence to parents.

When DeShayes proposed that the district might enlist a few parent volunteers, herself included, to walk the children to and from the playground at Zane North Elementary, just a block away, she was rebuffed.

As parents continued to press for answers, by December, they were told by Floyd in an e-mail that the playground “is taking a bit longer than expected,” and that the district was “still working out some of the logistics behind installation.” 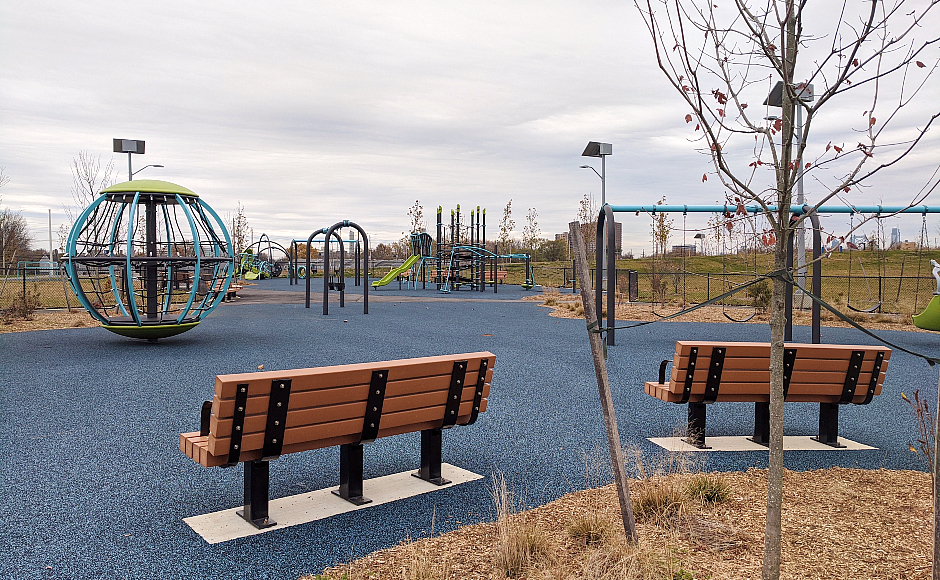 Finally, on February 25, 2022, parents were notified that although their children wouldn’t be playing outside until the play area was constructed, the kids would receive gross motor instruction—the kind of physical education that they might have had on a developmentally appropriate playground—indoors, in the church gymnasium, instead.

In a letter to families announcing the shift in policy, Floyd also wrote that the project had been put on hold “due to unforeseen zoning restrictions,” and that the district would work with the church “to find an alternate location for the playground.”

DeShayes said that, in subsequent conversations with Floyd, district Chief Academic Officer Jennifer McPartland, and Collingswood Superintendent Fred McDowell, she received conflicting accounts of why the playground hadn’t yet been created.

McDowell told her that although the church was okay with the district situating its playground in place of a beach volleyball court on its grounds, the Collingswood Historic Preservation Commission (HPC) was “playing hardball,” insisting that the district install a cast-iron fence around the site.

When parents followed up with the historic commission, however, they received an e-mail March 8 from HPC secretary Anita Schoeffling, who wrote, “There is no hold-up on the Historic end for this project.”

Schoeffling’s e-mail said that she’d been in contact with Collingswood Schools Supervisor of Buildings and Grounds Keith Higginbotham about the project since October 2021, and that the only reason HPC would have any jurisdiction over the fence is because the district rents the property from FUMC and doesn’t own it outright.

Schoeffling further said that the commission hadn’t received any application from the school district about fencing or a playground, and that she had followed up with Higginbotham “a few times” to put it on the HPC agenda.

“…I was told at the end of the year that the school district was not pursuing putting a playground in at this time and they were going in a different direction,” Schoeffling wrote.

She added that the February 25 letter to district families conflicted with her knowledge of the matter in conversations with Collingswood Zoning Officer Gretchen Kolecki.

“I have no idea why the attached letter would have been sent out by the school district to the parents, as the information about the hold-up being a zoning issue is not true,” Schoeffling wrote.

Collingswood Borough Administrator Cass Duffey backed up Schoeffling’s remarks last week, saying that the district has “been open to facilitating this fence from Day One.

“There is no zoning or historic hold-up from the borough’s end,” Duffey told NJ Pen.

On March 8, HPC member Meghan Crnic wrote to both Higginbotham and McDowell “to clarify, and to offer assistance” in the matter.

“The Commission would be happy to facilitate this and work with the District,” Crnic wrote.

“We can arrange a ‘field committee’ to answer any questions in advance of submitting an application; we have also worked to expedite cases when possible,” she wrote.

The next day, Higginbotham replied to Crnic that the district had been in communication with both Schoeffling and Kolecki, and that its officials “are aware of the requirements of both entities,” that is, the zoning board and historic commission.

“The confusion appears to stem from gross motor activities at the Pre-K being shifted indoors to the gym area,” Higginbotham wrote. “This was done in an effort to ensure the safety of students while maintaining suitable opportunities for physical activity. If the final location of the playground falls within the historic zone, we will reach out for approval by the commission.”

That answer didn’t satisfy DeShayes, who said the indoor gross motor education isn’t in keeping with what preschoolers need as per the New Jersey Department of Health policy for indoor and outdoor play at Early Childhood Education Centers.

That guidance, which dates back to 2014, recommends that preschoolers participate in “90-120 minutes per day of moderate to vigorous physical activity” and have “outdoor play for 60 to 90 minutes per day except in adverse weather conditions that require shorter periods outdoors.”

The NJDOE preschool program implementation guide further says that preschool children “must have access to a developmentally appropriate playground for at least 45 minutes daily” under the “outdoor requirements” section of its physical environment guidelines.

“I understand it’s not recess, it’s gross motor education,” DeShayes said. “Yes, I feel like the gym is better than the space you were using next to the street. But it’s not better than this playground that we supposedly have everything for.” 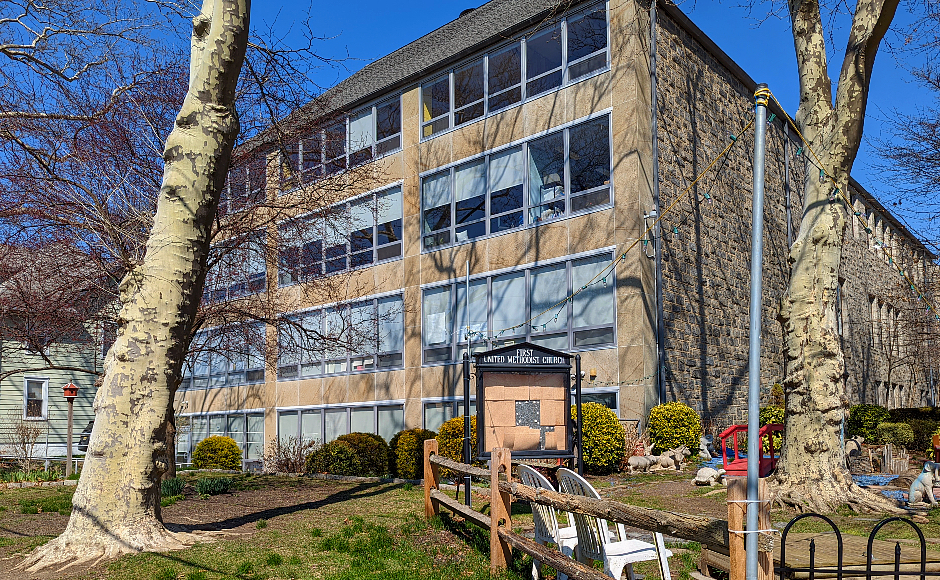 Finally, on March 19, Higginbotham said that district officials and representatives from FUMC had hammered out a new agreement that would hopefully construct a preschool-appropriate play area on the church grounds by late April 2022.

In mid-January, after seeking fencing permits for the site, he said Kolecki referred him to Schoeffling, who advised Higginbotham to provide renderings of the fencing, and to ask FUMC to authorize the district to act on its behalf at the historic commission.

Higginbotham said the original agreement between the district and the church was to erect the playground in place of its beach volleyball court. At some point thereafter, however, FUMC leadership changed its mind about those plans, he said, and then the project was scuttled.

Higginbotham maintains that the church intends to divest itself of a residence it owns on an adjoining property on Stokes Avenue, which will allow the playground to be established in the rear yard of that home. No representative from FUMC has responded to repeated requests to confirm this information.

With the new location of the playground established, Higginbotham said that district facilities crews will enclose the area in question, grade it off, install a fall zone, and then the equipment. They hope to have the project completed during spring break, while school is not in session. He also confirmed that the district had never prepared any formal application to the borough zoning or historic offices, which squares with Schoeffling’s account.

“I understand parents’ frustrations, and wish they would let us handle things,” Higginbotham said. “Negotiations are not things that people are privy to during discussion.”

Nonetheless, Higginbotham said the district intends to update parents of the change in plans, and hopes to have the playground “up and running after spring break,” he said.

Collingswood Board of Education President Regan Kaiden—who, like McDowell, has a preschooler enrolled at the FUMC site—said Friday that both district officials and representatives from the church “are working very hard to get this playground up as soon as possible.

“The kids are getting gross motor work; they’re just not getting it outside,” Kaiden said. “Each [preschool] place is supposed to have a playground, and that needs to happen.”

Additionally, she said the board has been in discussions with other property owners to expand the school district campus elsewhere in Collingswood, and expects to have more details to offer in a month.

Whether the district had hoped to resolve its issues with FUMC earlier, or to secure an alternative location for the preschool playground sooner, DeShayes said parents were kept largely in the dark, and the information they received was misleading.

“All the kids that started in 2020 have gone to preschool for two years without a playground,” DeShayes said. “I think that if there were more open and honest communication throughout the process, then parents would be more understanding,” she said.

“What it comes down to is they didn’t meet the requirements for some of these kids the whole time they’ve been in school. You have to be patient, but 18 months is a long time.”