Project organizers are soliciting feedback from residents, visitors, and commuters in both communities as they draft a comprehensive plan for safe transportation among them. 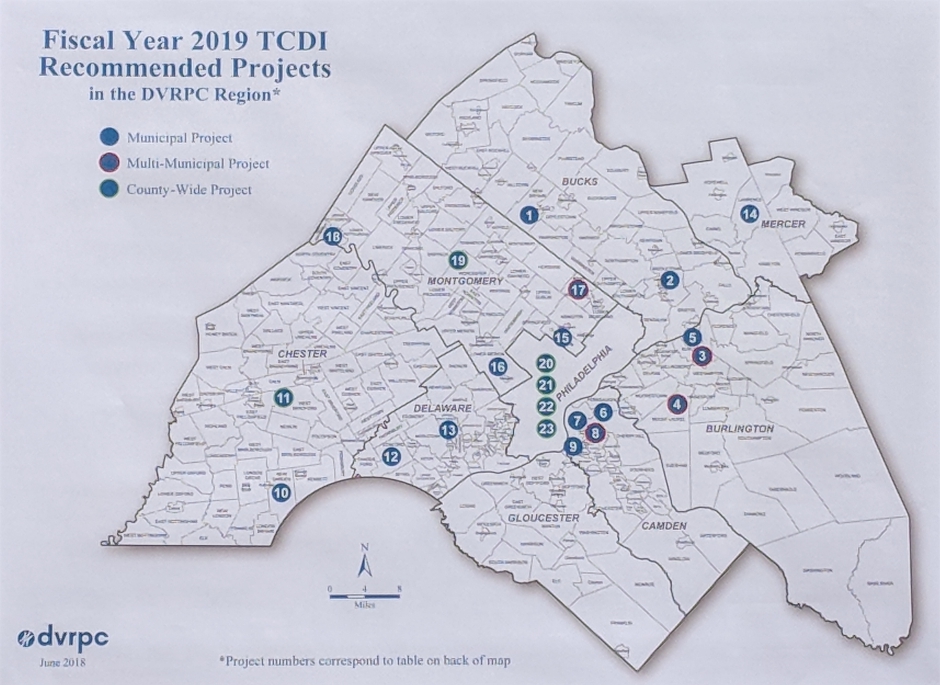 Back in July 2018, Collingswood and Haddon Township were awarded a $72,000 joint planning grant from the Delaware Valley Regional Planning Commission (DVRPC) to draft a master pedestrian and bicycle plan for both communities.

Dubbed “Connect 2020” by organizers, the multi-municipal project has been quietly gathering data for the past two years.

Now they’re ramping up the process, seeking feedback from residents and travelers that will inform their recommendations.

“We’re looking to connect people to everywhere they’re going, whether it’s employment, recreation, or businesses, and tying into the greater [transportation]  network that surrounds us,” said project manager Sandi Kelly.

“We want everyone in the community to feel like they can move around with ease and without fear,” Kelly said.

The Connect 2020 map debuted at the Collingswood Green Festival last spring; since then, planners have invited comment through a web-based survey and an interactive map that collects highly detailed feedback online.

“We want people to drive what this plan looks like,” Kelly said. 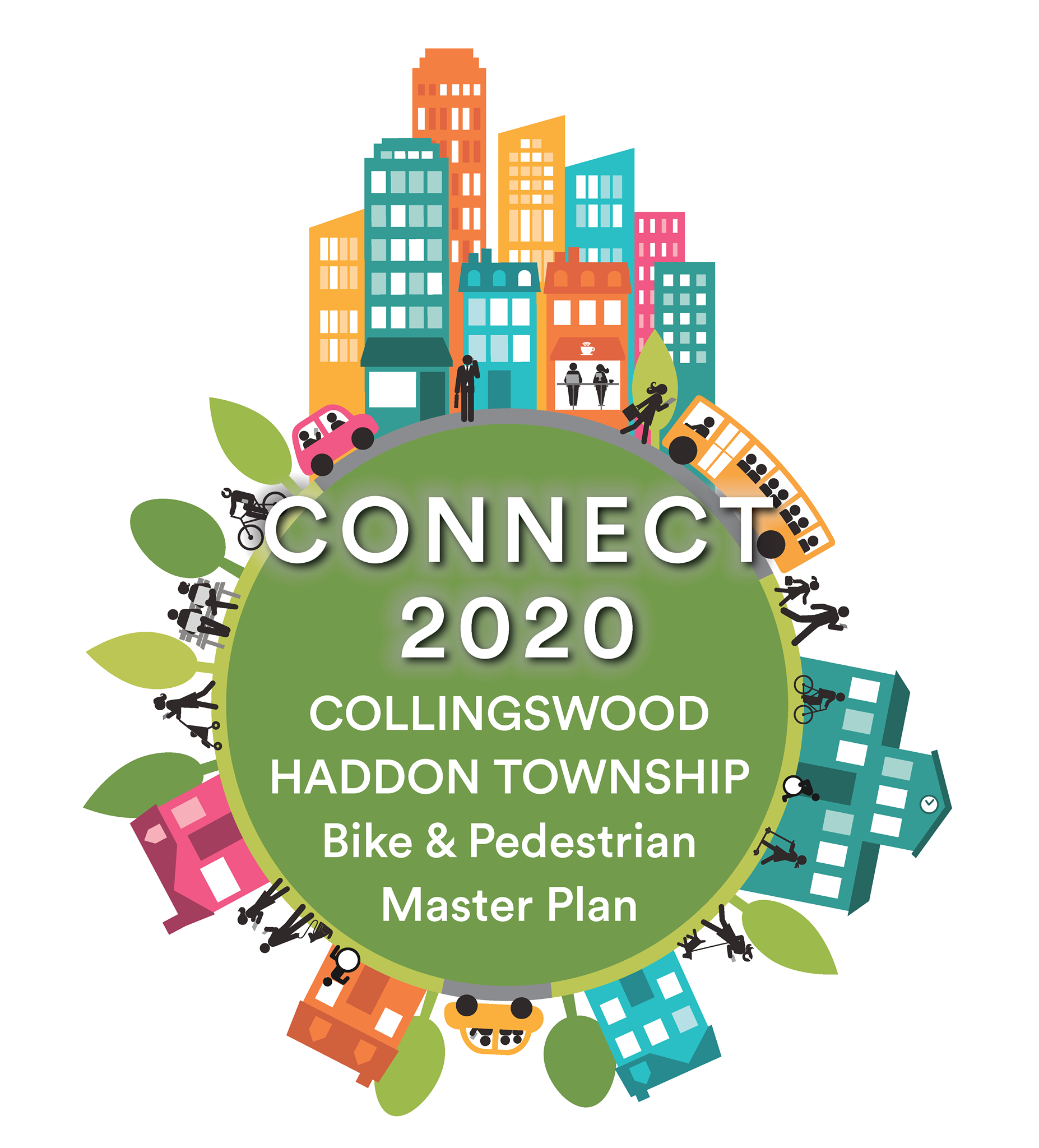 Doug Robbins, Senior Planner and Project Manager at Aecom of Philadelphia, said the amount of feedback that organizers have already collected “is almost unparalleled” compared with other projects on which he’s worked.

“Last year when we kicked this off, it was palpable how excited people were that we were talking about walking and biking in Collingswood and Haddon Township,” Robbins said.

“There was a feeling like this was a long time coming.”

Robbins, a 10-year Collingswood resident and father of two school-aged children, described both communities as “super-walkable,” albeit with room for improvement.

Inconsistencies in infrastructure condition and deployment and “very real budget constraints” in both municipalities make the opportunity of this study important.

“There’s a bunch of things that we’re going to be looking at in terms of this plan,” Robbins said. “We don’t want it to be one-note.

“This isn’t going to be just about bike lanes or the crosswalks on Haddon Avenue,” he said. “We’ve got destinations all over the place—schools, where people work, PATCO, recreation facilities—all these things where people want to walk or bike to.”

Some of the initial feedback hasn’t been surprising. Robbins pointed out that much of the biking infrastructure in Haddon Township and Collingswood is recreational, with a focus on parks like Newton Lake and Cooper River. There aren’t, however, bike lanes connecting the communities, or infrastructure protecting cyclists and pedestrians at major intersections along its highest-speed roadways.

“People have gone into great detail about why specific intersections are unsafe to them,” Robbins said. “It gets to the level of detail where, when we propose design interventions and policy changes, we can lean on some real feedback from folks who are walking, biking, and driving through these streets and intersections.” 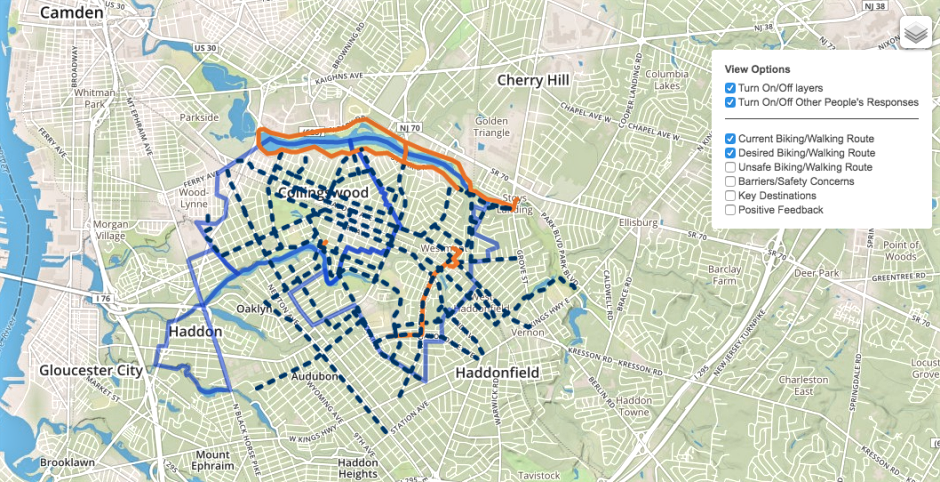 A user-generated wikimap from the Connect 2020 plan. Credit: NJPEN.

Three of the highest-incident areas identified by survey respondents include intersections at Haddon and Collings and Haddon and Atlantic Avenues; at Haddon Avenue and Cuthbert Boulevard; and at the intersection of Crystal Lake, Maple, and Haddon Avenues by the Westmont PATCO station. Two of those involve “skewed streets,” Robbins pointed out, and all three involve some of the busiest roadways in both towns.

The survey has also collected data from four years of bicycle and pedestrian vehicle collisions, incidents that Robbins said number “in the dozens and dozens.” Those data can show planners where people are getting injured while traveling, and how badly, he said.

“The raw amount is one thing, but when you see the geographic allocation of them, it’s even more informative,” Robbins said.

What he’s most interested to see is how riders, drivers, and pedestrians in both communities will regard the potential design solutions to those problems. Robbins described those moments as “a gut-check for folks.

“Both towns are going to have to confront some very real trade-offs when it comes to biking, walking, and driving in the same space,” he said. “Both towns are built out and pretty old; we’ve only got so much room between the curbs and the buildings to do some of this.” 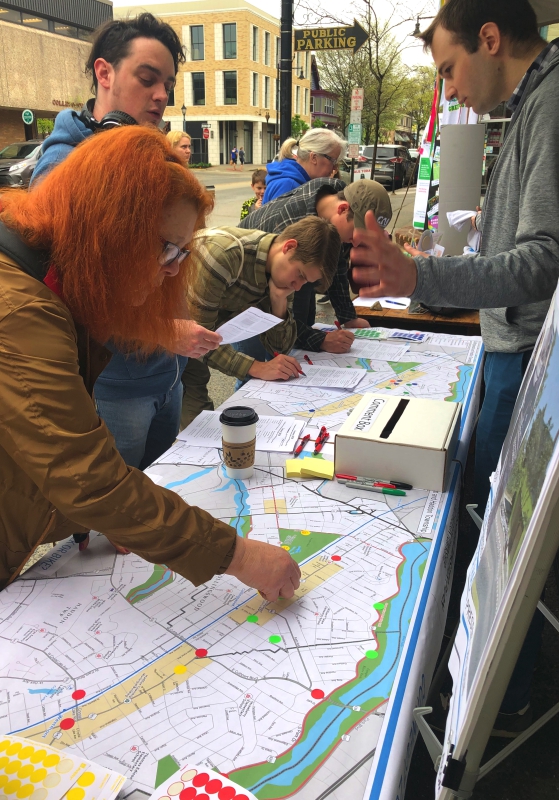 Some solutions could involve creating shared lanes for bikes and cars on slow-moving residential streets, protective barriers to separate drivers and cyclists, or illuminated crosswalks.

Robbins is soliciting residents’ opinions on those options at the outset of the project before recommendations are drafted.

He hopes to have some early implementation strategies by the spring or summer, and then a final plan by the fall.

Collingswood Community Development Coordinator Cassandra Duffey said she believes both towns have historically been considerate of all users of their roadways, but that the project reflects an opportunity to establish a long-term plan on which to base future developments.

“We’re always trying to get it to a better level, especially as we see more traffic downtown, at the farmers market, and between the two towns,” Duffey said.

“One of our goals is always about reducing injuries, but we’re also about the best way to connect for everybody—people in wheelchairs, people with strollers—making the best possible pathways for all users,” she said.

Duffey also echoed Robbins’ sentiment that the final result of the plan will reflect a negotiation among users of the various modes of transportation outlined in the survey.

“At the end of the day, we’re going to have to balance these wants and dreams and needs into something that’s usable for everybody,” she said. “It’s the kind of thing that we’re able to build on gradually after it’s done.

“[But]  we can’t build this kind of thing unless we have direct input from the people who are going to use it, and that includes all modes of transportation,” Duffey said. “People want to be heard on this topic.”