Trending
You are at:Home»Business»Construction Apace at DePace Sports Museum in Collingswood

Work has begun in earnest on the facility, which is shooting for a January 2015 opening. 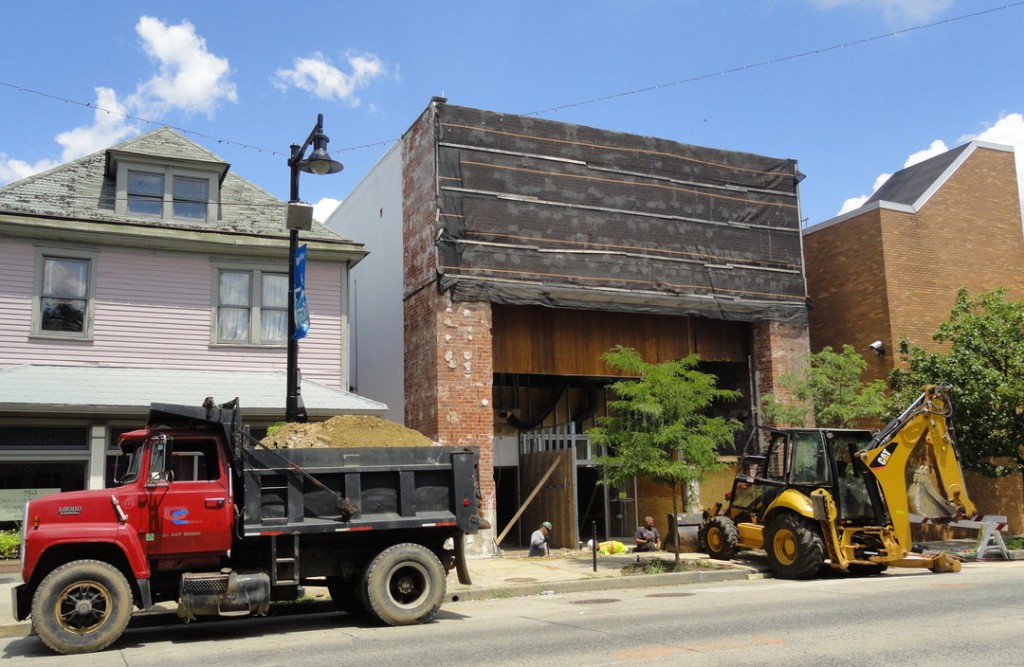 Construction vehicles help excavate and re-pour the foundation at the entrance to the DePace Sports Library on Haddon Avenue in Collingswood. Credit: Matt Skoufalos.

A historic Collingswood building is getting a facelift, as construction on the DePace Sports Library and Museum of Champions moves into full swing along Haddon Avenue.

The museum will house artifacts from the private collection of Haddonfield cardiologist Dr. Nicholas L. DePace, who bought the building in 2011.

After a lengthy review process, plans for the site were approved, and work began in late July. Crews poured a new foundation for the building two weeks ago, and have begun electrical work inside.

The existing facade–chunks of which collapsed to the street mere days after the 2012 May Fair–has been removed.

It will be replaced by a brick-and-column design that Collingswood Zoning, Code Enforcement and Health Officer Mary Ellen Ries said is “very consistent” with the downtown district and recalls the edifice of Connie Mack Stadium. 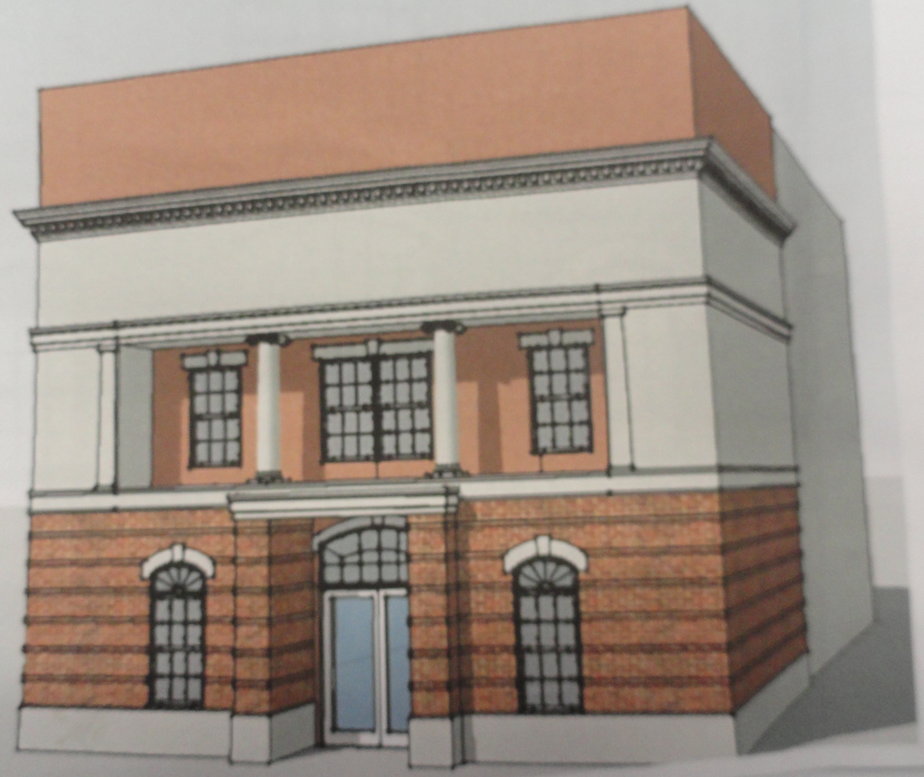 Rendering of the exterior of the DePace Sports LIbrary and Museum of Champions in Collingswood. Credit: Borough of Collingswood.

After those improvements are made to the front of the building, more extensive construction will be done to the rear of the property to remove the bank drive-through window and build an elevator granting handicap access to the second floor.

Approximately $400,000 is needed for the latter purpose, said DePace’s assistant, Eric Katz, because any design would have to traverse the bank vault.

Once the work is completed, the second floor could be used to host sports memorabilia auctions.

Plans for the interior are still emerging, as DePace shops around for a designer, Katz said.

The exhibits in the 10,000-square-foot facility are intended to be largely interactive, he said, and will include a life-sized statue of Muhammad Ali and Joe Frazier to greet guests at the entrance.

“Technologically, it’s going to be a big challenge,” Katz said, adding that the museum will have “a complete changeover” of exhibits every 13 weeks. 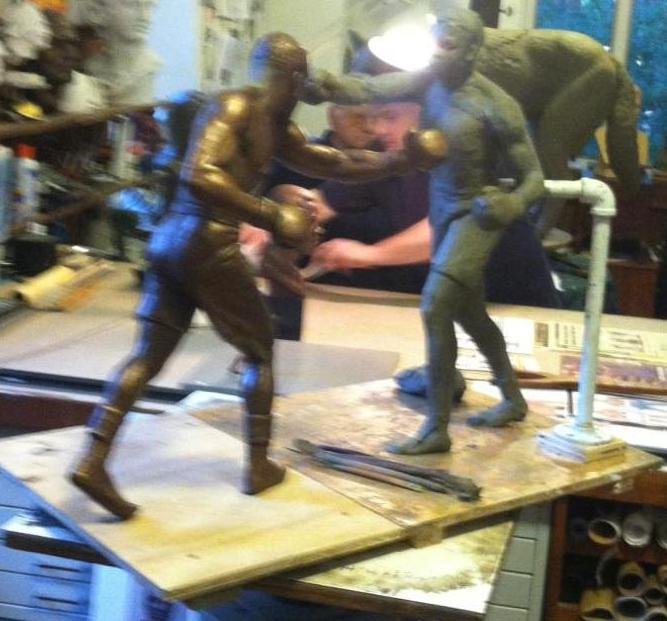 Maquette of the Ali-Frazier installation planned for the DePace museum. Credit: Eric Katz.

Admission to the facility was originally planned to be free, but the more extensive renovations make it more likely that a nominal fee will be required to offset their costs, Katz said.

Once operations are in full swing, the museum will host “lots of school trips,” Katz said. He projects that it could reasonably see some 80 children daily during the week.

DePace’s “whole thing is to get this [museum open]for children” to see the memorabilia, Katz said.

The collection includes such rarities as Marilyn Monroe and Joe DiMaggio’s marriage certificate, Babe Ruth’s baseball bat, and trunks-and-robe sets from the Ali-Frazier Fight of the Century.

Katz added that the doctor thinks Collingswood is the perfect setting to display such artifacts.

“He loves the town,” Katz said; “loves the whole idea of it.” 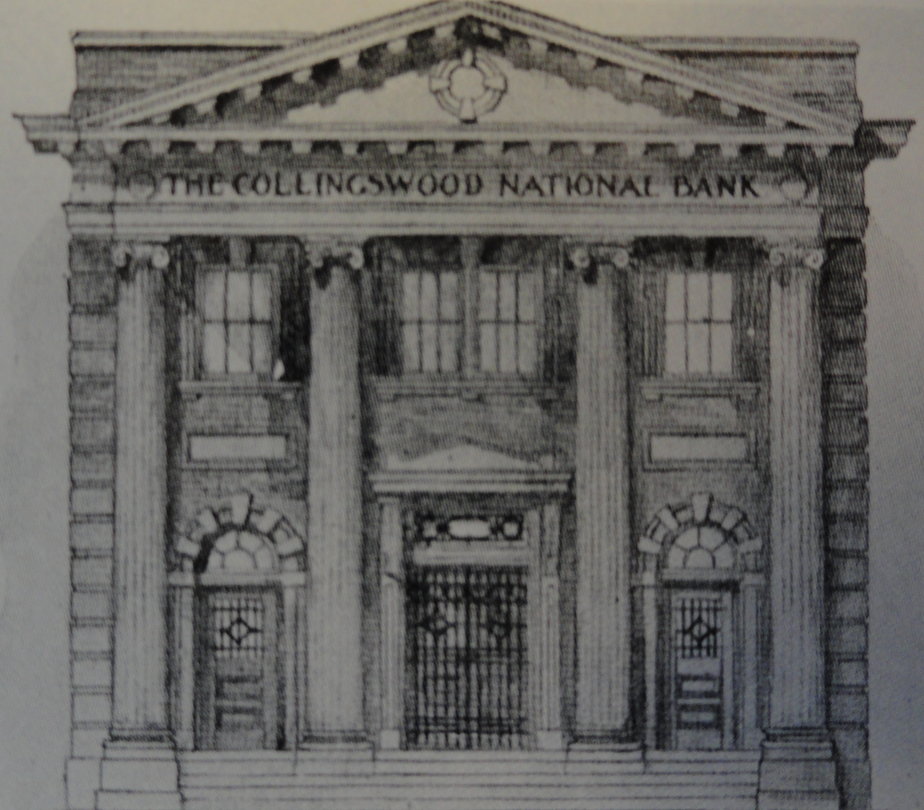 Historic rendering of the “Collingswood National Bank,” which is being renovated by Haddonfield cardiologist Dr. Nicholas DePace. Credit: Borough of Collingswood.