In a packed briefing Wednesday, Gov. Phil Murphy and health officials cover a wide range of issues from the necessity for booster immunizations to conflict over vax-or-test rules at the state legislature. 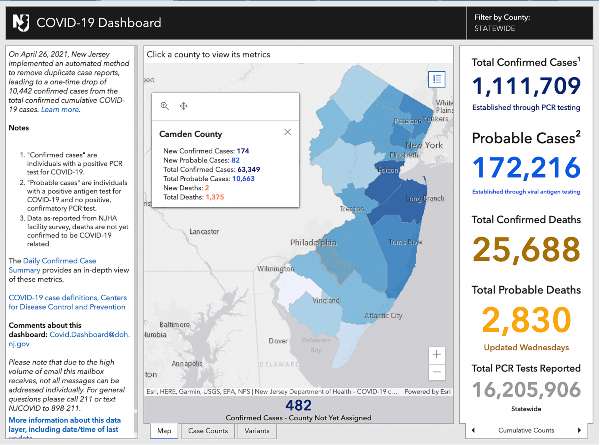 “We have experienced, as we expected and predicted, a post-Thanksgiving spike,” Murphy said. “There’s no other way really to look at these numbers,” which the governor described as having been driven by an increase in indoor gatherings around the holiday.

Sadly, 24 more residents have perished from complications related to the virus, bringing the statewide, confirmed death toll to 25,688 lives lost during the pandemic.

In addition to those lab-confirmed fatalities, the state has acknowledged another 2,830 probable COVID-19-related deaths—three more than previously reported.

More than 16.205 million polymerase chain reaction (PCR) tests for COVID-19 have been performed statewide, with a 12.65-percent positivity rate per 100,000 residents.

The statewide average of COVID-19 spot positivity testing based on PCR test results stood at 9.6 percent December 4; in South Jersey, it was highest, at 11.29 percent.

Rt, the variable that describes the seven-day, rolling-average, statewide rate of transmission of new COVID-19 cases, rose to 1.36 on December 8.

Among those hospitalized patients, 261 are in intensive or critical care, and 117 of the ICU and critical-care patients (46 percent) are on ventilators.

In New Jersey’s 71 critical care hospitals, 259 patients were hospitalized with COVID-19 yesterday, while 158 others were discharged.

New Jersey Health Commissioner Judy Persichilli reported that 75 to 80 percent of hospitalizations are of unvaccinated people.

“Surely, our [hospital] numbers across the board are roughly one-third of what they were a year ago at this time—thanks to the vaccines, I might add,” Murphy said.

“But keeping our healthcare system strong and capable of caring not just for COVID patients, but everyone else who needs care, remains of paramount concern,” he said.

“The burnout that our nurses and doctors and other staff members are experiencing after now what is basically 21 going on 22 months of the pandemic cannot be overlooked.”

Across the state, long-term care (LTC) centers have reported 1,852 cumulative outbreaks of COVID-19, and 142 are dealing with an active outbreak. LTCs account for 57,874 infected patients and staff in New Jersey, or 5.7 percent of total cases.

That includes 34,328 residents and 23,546 staffers sickened by the virus, as well as 8,715 lab-confirmed resident and staff deaths (35 percent of the statewide confirmed total), with facilities self-reporting 145 staff deaths.

Of 633 veterans residing in three state-run homes, 456 residents have tested positive for COVID-19, and 158 have died from complications related to the virus. Three hundred veterans have recovered from the virus. No resident currently is COVID-19-positive.

The facilities at Menlo Park, Paramus, and Vineland are staffed by 1,372 workers, eight of whom are presently COVID-19-positive. The facilities have sustained two staff deaths related to the virus.

At state-run psychiatric hospitals, 378 of 1,139 patients and 1,136 staff members have tested positive for COVID-19. Fourteen patients and eight staffers have died from complications related to the virus.

To date, 151 New Jersey children aged 1 to 18 have been diagnosed with pediatric multisystem inflammatory syndrome (MISC)—two more than previously reported. One is previously hospitalized. Four of those cases were reported in Camden County, tied with Cumberland and Monmouth Counties for third-least in the state.

Since the start of the 2021-2022 school year, 248 reported outbreaks—three or more students or staff who contracted the virus within the school—have been logged, affecting 1,345 people, a mix of students and staff.

In Camden County, 24 COVID-19 outbreaks have accounted for the in-school infections of 206 people, which is the most of any county in the state, and more than the county had sustained in the entire prior school year.

Next Wednesday marks the one-year anniversary of the administration of the first COVID-19 vaccinations in New Jersey; in that time, 12.564 million COVID-19 doses have been administered.

The state must now work to increase vaccination rates among children who are eligible and encourage more residents to get boosters.

“As the holidays approach, the best thing we can do to protect ourselves, our families, and our communities, is to get a booster shot,” Persichilli said.

Of the 4.5 million New Jersey residents eligible for a booster, 34 percent have received one; the state is averaging about 35,000 booster doses per day, “but we need to do better,” she said.

According to Persichilli, the biggest vaccination shortfall remains among the youngest residents in the state:

“Those that can be vaccinated should be vaccinated,” the health commissioner said. “In times of high transmissibility and high cases, it is going to flow over into our schools; that’s what we’re seeing now.

“If you want to protect your children, get yourself vaccinated,” she said.

Throughout New Jersey, 6.050 million people have been fully vaccinated in-state, having received either a one-shot formulation from Johnson and Johnson or both doses of the two-shot Pfizer or Moderna vaccines.

In Camden County, 666,853 doses have been administered, seventh-most in the state; 324,915 people have been fully vaccinated.

An estimated 537,335 vaccine doses have been administered to New Jersey residents outside of the state, of which 229,944 residents are estimated to have been fully vaccinated.

Last Friday, the first case of the COVID-19 variant B.1.1.529 “Omicron” was identified in New Jersey.

Officials identified the patient as a fully vaccinated Georgia woman who had recently traveled to South Africa before visiting New Jersey.

“She experienced moderate symptoms and is now recovering after receiving care in a North Jersey emergency department,” according to a statement from the governor’s office issued December 3.

Murphy said Wednesday that it’s likely other Omicron cases will be confirmed in New Jersey, but reminded residents that, “in the meantime, our lived reality is that the Delta variant remains overwhelmingly—I would almost say near-exclusively—the variant of concern in New Jersey.”

Little is definitively known about the transmissibility or virulence of the new variant, which the World Health Organization (WHO) designated as a new variant of concern November 26.

“What we’re seeing more and more around the world is that people who’ve been vaccinated are coming down with the variant, although luckily, it tends to be not as severe,” he said.

Lifshitz also urged residents to get a third, booster dose to guard against any waning immunity from earlier vaccinations, citing the effectiveness of existing vaccine formulations against the Delta variant, which accounts for nearly all COVID-19 cases in New Jersey at present.

All people aged 18 and older are immediately eligible for a booster dose.

“If you get that third dose, your antibodies get boosted so high that essentially your levels get back to the protection you had originally when you had your first two doses back in the spring,” he said.

The doctor also offered some general guidance on emotionally processing new information about the pandemic as it drags into its 22nd month in New Jersey.

“We have a certain percentage of the population who would like to think that everything is over and not need to take any precautions at all, and, on the other hand some people are panicking over every bit of news and worrying about Omicron and everything else,” Lifshitz said.

“I think we need to learn to live somewhere between complacency and panic,” Lifshitz said.

“Masking, physical distancing, washing your hands—we know that all works,” Persichilli added. “Whether it’s Omicron or Delta, we should be instituting the non-pharmaceutical interventions every day.” 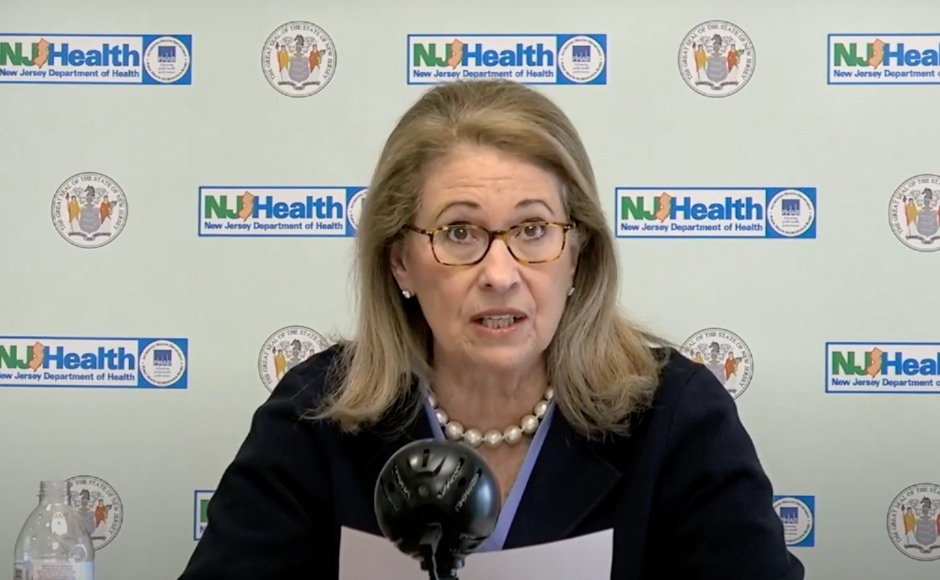 Amid the uptick in COVID-19 cases, the governor expressed his abiding frustration with those who refuse to get vaccinated, a population that comprises the overwhelming majority of hospital patients.

Murphy’s remarks came amid lots of discussion of the effects of burnout on healthcare workers who are now reorganizing their lines of service to accommodate the additional surge of COVID patients to the detriment of other healthcare concerns.

“Folks who are unvaccinated getting sick and willfully ignoring the science and going into these hospitals and adding to their burden even more unacceptable,” the governor said. “They are adding to the problem.”

The impact of nearly two years of pandemic care is driving many healthcare workers away from the positions where they’re needed most, Persichilli said. She categorized them as the “burned-out,” the “aged-out,” and the “bought-out.”

They are, respectively: people who’ve “worked the front lines at the worst of the surges, seeing their friends and colleagues fall sick, and some of them dying;” those who are “at retirement or close to it and leaving the profession because of the circumstances that they’ve worked through;” and those accepting “very attractive packages from staffing agencies,” to leave their current positions for other assignments, Persichilli said.

While the state can work with hospitals to help them address other models of care delivery, there’s little it can do in a pressing labor market to address the depletion of healthcare staff by worker burnout, she said.

Finally, the governor reserved his strongest criticisms for a group of Republican lawmakers who last week flouted statehouse rules requiring that everyone on the premises show either proof of vaccination or of a recent negative COVID-19 test.

NJ.com reported on the confrontation last Friday in detail, noting that New Jersey State Troopers tasked with securing the facility detained briefly lawmakers who declined to follow the rules before ultimately allowing them to take their seats on the legislative floor.

On Wednesday, the governor condemned “the idiocy of these ringleaders” among the legislative caucus “who are putting their fellow members’ health and the family of these members at risk.”

“This is not about freedom or civil rights, it’s about their willingness to volitionally run the risk of infecting innocent, law-abiding folks who have done the right thing during this pandemic,” Murphy said.