Health officials express concern for children; some 520,000 across the state are too young to be vaccinated. 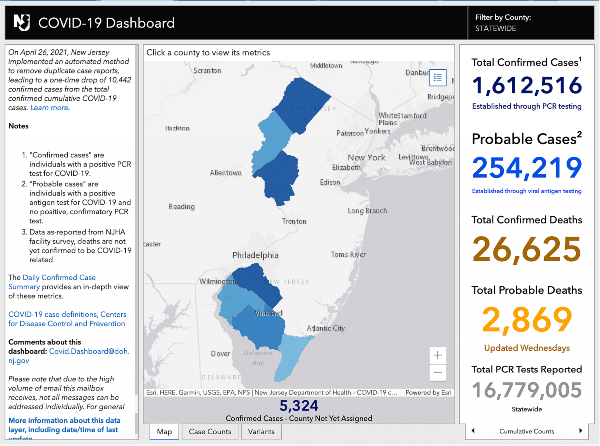 New Jersey Health Commissioner Judy Persichilli said the state hasn’t yet hit its peak in the B.1.1.529 “Omicron” variant surge, which Murphy described as a “tsunami” of new infections.

Predictive models say that peak may occur sometime in the first two weeks of February before there’s a downturn in new cases, Persichilli said, but until then, new infections are expected to trend somewhere between 20,000 to 30,000 per day in January, with hospitalizations peaking a week or two thereafter.

“We’re recording more cases day-to-day than at any point in the past 22 months,” Murphy said.

Sadly, 29 more residents have perished from complications related to the virus, bringing the statewide, confirmed death toll to 26,625 lives lost during the pandemic.

In addition to those lab-confirmed fatalities, the state has acknowledged another 2,869 probable COVID-19-related deaths—14 more than previously reported.

More than 16.779 million polymerase chain reaction (PCR) tests for COVID-19 have been performed statewide, with a 15.91-percent positivity rate per 100,000 residents.

The statewide average of COVID-19 spot positivity testing based on PCR test results stood at 30.2 percent January 10; in South Jersey, it was higher, at 30.39 percent.

Rt, the variable that describes the seven-day, rolling-average, statewide rate of transmission of new COVID-19 cases, rose to 1.55 on January 10.

Among those hospitalized patients, 843 are in intensive or critical care, and 474 of the ICU and critical-care patients (50 percent) are on ventilators.

“Over the past two weeks, well over 10,000 residents have entered our hospitals,” the governor said, a 20-percent increase. ICU and ventilator numbers have doubled since Christmas, yet remain shy of their April 2020 peak (2,080 ICU patients).

An estimated 68 to 70 percent of those hospitalizations are of people who are partially vaccinated or unvaccinated, Persichilli said.

In New Jersey’s 71 critical care hospitals, 753 patients were hospitalized with COVID-19 yesterday, while 678 others were discharged.

Finally, Persichilli noted that children are being hospitalized with COVID-19 at a greater rate than at any time during the pandemic; two have died from complications related the virus, joining the toll of 1,000 children nationwide.

Among those 82 children hospitalized with COVID-19 are 27 who were initially admitted for COVID-19 and another 55 who tested positive for the virus within the hospital.

Across the state, long-term care (LTC) centers have reported 1,980 cumulative outbreaks of COVID-19, and 522 are dealing with an active outbreak. LTCs account for 73,309 infected patients and staff in New Jersey, or 4.9 percent of total cases.

That includes 40,580 residents and 32,739 staffers sickened by the virus, as well as 8,799 lab-confirmed resident and staff deaths (34 percent of the statewide confirmed total), with facilities self-reporting 171 staff deaths—26 more than previously reported.

Of 630 veterans residing in three state-run homes, 456 residents have tested positive for COVID-19, and 161 have died from complications related to the virus—three more than previously reported. At least 300 veterans have recovered from the virus, and 29 currently are COVID-19-positive.

The facilities at Menlo Park, Paramus, and Vineland are staffed by 1,371 workers, 148 of whom are presently COVID-19-positive. The facilities have sustained two staff deaths related to the virus.

At state-run psychiatric hospitals, 378 of 1,139 patients and 1,136 staff members have tested positive for COVID-19. Fourteen patients and eight staffers have died from complications related to the virus, and 75 are currently positive.

MISC and school cases up

To date, 156 New Jersey children aged 1 to 18 have been diagnosed with pediatric multisystem inflammatory syndrome (MISC)—one more than previously reported. Five of those cases were reported in Camden County, which tied with Cumberland and Monmouth Counties for sixth-fewest in the state.

Since the start of the 2021-2022 school year, 384 reported outbreaks—three or more students or staff who contracted the virus within the school—have been logged, affecting 2,227 people, a mix of students and staff.

In Camden County, 39 COVID-19 outbreaks have accounted for the in-school infections of 290 people, which is the largest case count of any county in the state, and more than the county had sustained in the entire prior school year.

More than 13.156 million primary-series COVID-19 doses have been administered in New Jersey, with 6.266 million people having been fully vaccinated in-state, having received either a one-shot formulation from Johnson and Johnson or both doses of the two-shot Pfizer or Moderna vaccines.

Some 75 percent of the state population that is eligible for vaccination has completed its full vaccination series, Persichilli said.

In Camden County, 691,539 doses have been administered, seventh-most in the state; 334,485 people have been fully vaccinated.

An estimated 520,950 vaccine doses have been administered to New Jersey residents outside of the state, of which 211,799 residents are estimated to have been fully vaccinated.

The unvaccinated remain at the greatest risk of serious illness or death from COVID-19, Persichilli said, urging all residents to receive their shots and boosters; so far, only 46 percent of those eligible have received one.

The health commissioner said she is especially concerned for the 520,000 New Jersey children who are too young—under the age of five—to be vaccinated. 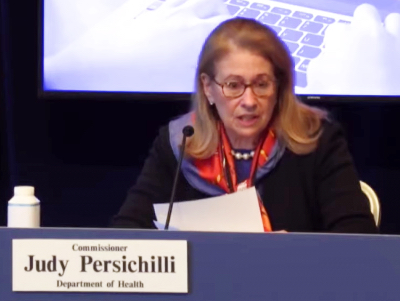 On March 29, New Jersey crossed the 4-million-dose threshold, and the state cleared 5 million doses over the weekend of April 10, 2021.

Eight days after that, New Jersey hit the 6-million-dose mark. By May 3, 2021, the state had cleared 7 million doses administered, and two weeks later, it had surpassed 8 million doses.