Trending
You are at:Home»Government»Coronavirus Update: 1.867M Infections, 29,840 Related Deaths; In Penultimate Briefing, Murphy Says NJ ‘Getting Back to Normal’

Plus: New Jersey enters a second week of vaccination and boosting events, in-hospital deaths remain in double-digits, and masking heads towards a situational, discretionary strategy. 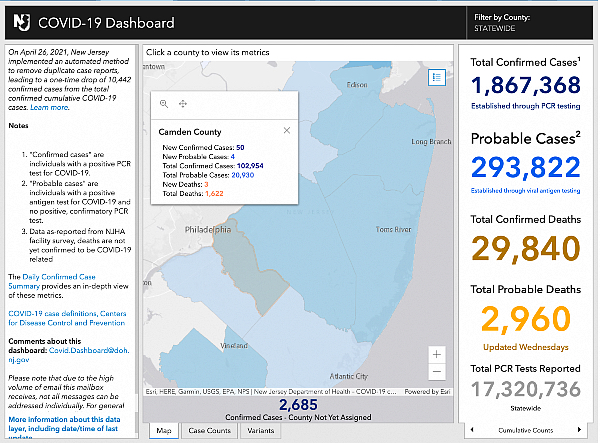 Wednesday’s briefing represented the penultimate pandemic press conference, Murphy said, citing “the need to move forward” from a pandemic to an endemic statewide response to the virus, as new infections dwindle amid a shrinking transmission rate.

The governor said New Jersey would hold it final regular state COVID-19 briefing next Friday, March 4, coinciding with the two-year anniversary of first recorded case of COVID-19 in the state. Barring “a material and meaningful deterioration” of conditions in the state, officials won’t reconvene for another.

Sadly, 15 more residents have perished from complications related to the virus, bringing the statewide, confirmed death toll to 29,840 lives lost during the pandemic.

In addition to those lab-confirmed fatalities, the state has acknowledged another 2,960 probable COVID-19-related deaths—23 more than previously reported.

More than 17.320 million polymerase chain reaction (PCR) tests for COVID-19 have been performed statewide, with a 21.22-percent positivity rate per 100,000 residents.

The statewide average of COVID-19 spot positivity testing based on PCR test results stood at 4.65 percent February 23; in South Jersey, it was highest, at 5.38 percent.

Rt, the variable that describes the seven-day, rolling-average, statewide rate of transmission of new COVID-19 cases, held at 0.69 February 22 and 23.

Throughout New Jersey, 975 people currently are hospitalized with a suspected (26) or confirmed (949) case of COVID-19, Murphy said.

That’s the first time since November 28, 2021, that hospitalizations have retreated below 1,000 patients, almost a three-month window.

Among those hospitalized patients, 168 are in intensive or critical care, and 109 of the ICU and critical-care patients (65 percent) are on ventilators.

In New Jersey’s 71 critical care hospitals, 106 patients were hospitalized with COVID-19 yesterday, while 140 others were discharged.

New Jersey Health Commissioner Judy Persichilli said that COVID-19-related deaths of hospitalized people in New Jersey are decreasing, but still in double digits, and are primarily of unvaccinated people. The commissioner noted that 35 percent of those deaths are of people who did not receive a vaccine booster.

“The booster significantly lowers your risk of hospitalization and death,” Persichilli said, urging residents to complete their vaccination series.

Across the state, long-term care (LTC) centers have reported 2,362 cumulative outbreaks of COVID-19, and 472 are dealing with an active outbreak. LTCs account for 84,628 infected patients and staff in New Jersey, or 4.5 percent of total cases.

That includes 46,762 residents and 37,866 staffers sickened by the virus, as well as 9,249 lab-confirmed resident and staff deaths (30 percent of the statewide confirmed total), with facilities self-reporting 149 staff deaths.

Of 607 veterans residing in three state-run homes, nine residents currently are positive for COVID-19, and 169 have died from complications related to the virus—two more than previously reported.

The facilities at Menlo Park, Paramus, and Vineland are staffed by 1,370 workers, four of whom are presently COVID-19-positive. The facilities have sustained two staff deaths related to the virus.

At state-run psychiatric hospitals, 30 of 1,128 patients and 60 of 1,136 staff members have tested positive for COVID-19. At least 14 patients and eight staffers have died from complications related to the virus.

To date, 186 New Jersey children aged 1 to 18 have been diagnosed with pediatric multisystem inflammatory syndrome (MISC)—two more than previously reported. Five of them are presently hospitalized.

One child has died from complications related to the syndrome in New Jersey. Five MISC cases have been reported in Camden County, sixth-fewest among all counties in the state.

New Jersey has sustained four COVID-associated child deaths, including those of three infants, since Christmas, Persichilli said, adding that none of those children had significant underlying conditions that could have compromised their immune response to the virus.

Overall, the state has lost 12 children of COVID-related causes throughout the pandemic; eight of them have been younger than four, and four others were aged five to 17.

Since the start of the 2021-2022 school year, 507 reported outbreaks—three or more students or staff who contracted the virus within the school—have been logged, affecting 3,450 people, a mix of students and staff.

In Camden County, 53 COVID-19 outbreaks have accounted for the in-school infections of 412 people, which is the largest case count and second-largest outbreak count of any county in the state, and more than the county sustained in the entire prior school year.

More than 13.616 million primary-series COVID-19 doses have been administered in New Jersey, with 6.485 million people having been fully vaccinated in-state, having received either a one-shot formulation from Johnson and Johnson or both doses of the two-shot Pfizer or Moderna vaccines.

New Jersey will host 150 vaccination events statewide to help drive vaccine and booster uptake through “Boost NJ 2 Week.” Persichilli noted that additional doses are available for the immunocompromised should their physicians advise it.

In Camden County, 716,799 doses have been administered, seventh-most in the state; 399,471 people have been fully vaccinated.

An estimated 560,724 vaccine doses have been administered to New Jersey residents outside of the state, of which 224,033 residents are estimated to have been fully vaccinated.

By mid-July, that number had increased to 5.019 million people fully vaccinated at New Jersey vaccination sites. At the end of August 2021, the state had exceeded 11 million doses administered and had begun approaching 6 million fully vaccinated residents. 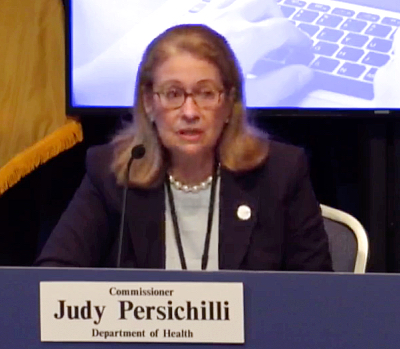 Masking to become situational, discretionary in many circumstances

“We do recommend a turn to universal school-wide masking when conditions call for it,” Murphy said, including during periods of elevated community transmission, active local outbreaks, or when students fall ill.

As school districts and childcare centers consider dropping their mask mandates, Persichilli urged them to do so in consideration of complementary factors, including their ability to maintain physical distancing, to screen students, to perform contact tracing, to isolate exposed children and staff, and to provide adequate ventilation.

She also asked that both entities consider the vaccination rates among their populations, and “make masking decisions based on their individual circumstances,” adding that people should consider masking if they’re immunocompromised or live with someone who is.

Despite the state mandate retiring March 7, children two and older must still wear masks when on school buses, which is a statute codified by the U.S. Centers for Disease Control. Federal masking mandates are still in effect in many mass transit environments, including on planes, trains, and buses.

Murphy said the state will review its own policies for masking in state buildings “in the relatively near future.

“We’re pretty much getting back to where we want to be, which is normal,” the governor said.

Later, he added, “It’s not saying we’ve defeated this thing, it’s saying we can responsibly live in its midst.”