Governor Phil Murphy says word on the plan for reopening the state could be expected Monday. So far, New Jersey has spent at least $120 million on personal protective gear and paid out $1 billion in unemployment. 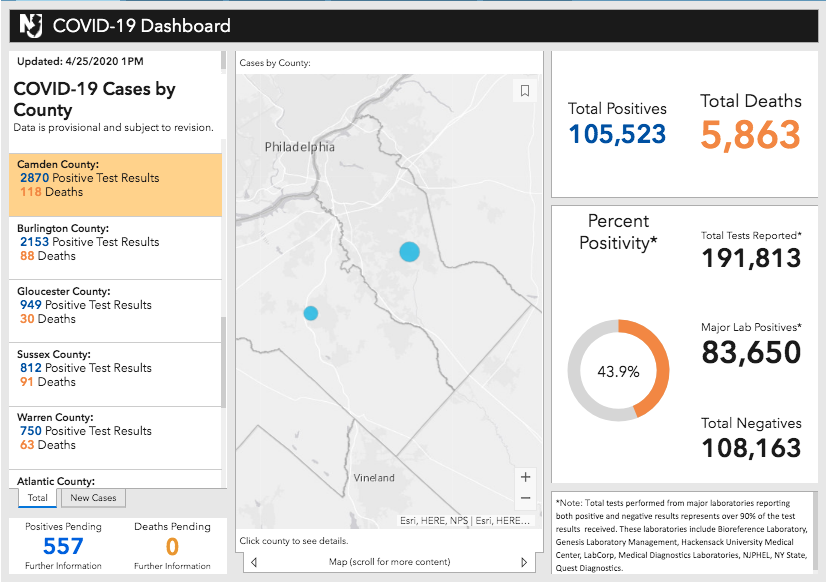 Throughout the state, another 249 people lost their lives to COVID-19-related complications, bringing the statewide pandemic death toll to 5,863.

Across New Jersey, 6,722 people are hospitalized, either with a confirmed case of COVID-19 or awaiting confirmation of their symptoms.

Of those, 1,971 of them are in critical or intensive care; 1,442 are on ventilators. Another 99 patients are being cared for in field medical stations across the state.

Hospitalizations are declining in the north, flattening in Central Jersey, and actually “are on a slight increase in the southern region,” said New Jersey Health Commissioner Judy Persichilli.

“As we’ve worked on this, we’ve flattened the curve, but it has spread it out, and that’s exactly what we wanted to do to be able to handle the capacity,” Persichilli said, noting, “we do expect to be seeing cases through May.”

In the past 24 hours, New Jersey has admitted 561 new patients to hospitals versus 686 who were discharged to either a lower-acuity care setting or to their homes. Those numbers have decreased consecutively since Thursday, Murphy said.

Persichilli accounted for the stronger number of discharges over intake as being related to hospital workers developing better techniques and patients not delaying a trip to the emergency room when it’s needed. 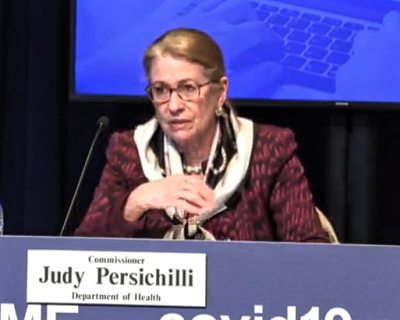 The curve of new cases “is undeniably flattening, and that’s in the face of a lot more testing,” the governor said, but “we need to see more progress, more flattening” before the state can reopen, he said.

“We know that’s the number of positive tests, but what exactly the denominator is, people around the world literally are trying to war-game that,” Murphy said.

The governor also offered a handful of numbers that illustrate the breadth of the pandemic.

Even operating under a 75-25 cost share with the federal government, New Jersey has spent $120 million on personal protective equipment. The state has also paid out more than a billion dollars in unemployment, Murphy said.

He also intimated that New Jersey would likely need to borrow money to offset expenditures and the cost of operating during the pandemic.

“I don’t see any scenario where we get out of this without having to borrow a meaningful amount of money, even if it’s just a bridge program through the federal government,” the governor said.

New Jersey State Police Col. Pat Callahan noted that throughout the shutdown, only 204 violations of the state stay-at-home executive order “have risen to an indictable-offense level.”

Finally, the governor said that on Monday, residents can expect a broadstrokes outline of a reopening plan for New Jersey, “whenever that may come.”