Plus: New Jersey gets some flexibility on using federal CARES Act funds, $467 million of which will go to school aid, and a note on counting deaths from NJ Medical Director Edward Lifshitz. 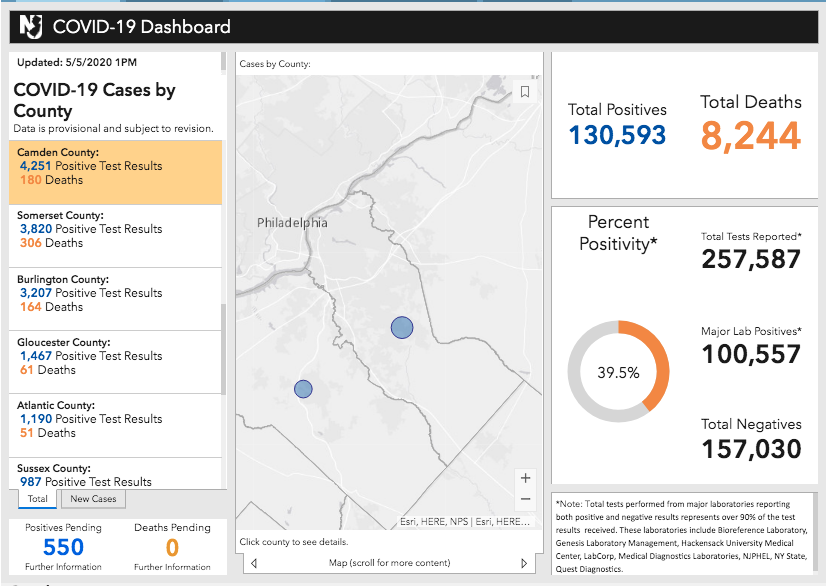 Sadly, 334 more residents perished from complications related to the virus, bringing the statewide death toll to 8,244 lives lost during the pandemic.

Those data include “some lagging results from the past several days,” Murphy said; on Monday, he reported a network outage that affected the state reporting systems over the weekend.

Throughout New Jersey, 5,328 people are hospitalized with a case of COVID-19, or while awaiting confirmation of their symptoms, marking a full week of declining numbers, the governor said.

“There was one point in our very worst-case scenario where we anticipated 36,000 hospitalizations,” Murphy said. “Our vigilance is working.”

Of those, 1,534 are in intensive or critical care, and 1,169 are on ventilators, both numbers of which are on “a steady decline,” said New Jersey Health Commissioner Judy Persichilli.

In the past 24 hours, hospitals admitted 385 new patients and discharged 232 others, either to a lower-acuity care setting or to their homes. Thirty-five patients are presently receiving care at one of the state’s field medical stations, which have served 400 people in total.

Statewide, 509 long-term care (LTC) centers have reported at least one case of COVID-19. Of 677 veterans residing in a state-run home, 360 residents have tested positive for the virus, and 125 have died from complications related to COVID-19.

At state-run psychiatric facilities, 167 of 1,250 patients have tested positive for COVID-19 and 11 people have died from complications related to the virus.

LTC concerns were the centerpiece of Tuesday’s briefing, as New Jersey Attorney General Gurbir Grewal announced the state would be conducting ongoing investigations into how those facilities handled “the equivalent of a 500-year flood,” and Persichilli described ongoing LTC testing efforts.

“Our investigation was prompted by both the high numbers of deaths we’ve seen at the facilities and the disturbing reports we were receiving,” Grewal said.

“We’re not alleging any misconduct,” he said. “We’ll simply follow the facts and the law wherever they lead us.”

The attorney general invited residents with any “firsthand knowledge of illegal activity or other misconduct” to use an anonymous reporting form hosted at the state COVID-19 website.

Persichilli said the pandemic has led the state health department to issue plans of correction for several facilities that require them “to bring in consultants on nursing and infection control.”

As increased testing is critical to stopping the spread of the virus, the state will continue to roll out LTC testing in the second of four, graduated phases, starting at those sites with fewer than five COVID-19 cases, then those with six to 25 cases, and then everywhere else.

“We’re prioritizing facilities with fewer cases so immediate action can be taken to increase infection control protocols to further reduce spread and save lives,” the commissioner said. 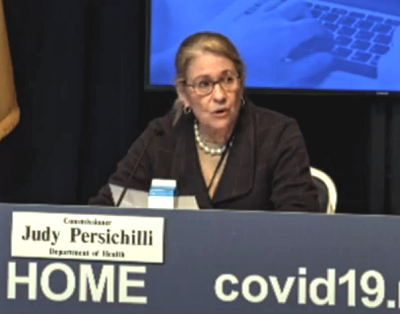 Those numbers underscore the need for more widespread testing, as “most of these individuals were asymptomatic,” she said.

“I want you to reflect on that as we promote social distancing [and]  wearing face coverings, we do so for a reason,” Persichilli said.

“Asymptomatic, positive individuals are amongst us,” she said.

While LTCs are cleaned up, nearly 580 COVID-19-positive patients who have been discharged from hospitals and are awaiting nursing home placements will be housed at sites managed by CareOne of Fort Lee and Alaris Health of Jersey City, she said.

Another 250 beds also have been set aside at East Orange General Hospital for those patients requiring skilled nursing care.

In an illustration of how much support New Jersey’s health system has required to battle the pandemic, Grewal said that more than 18,000 licenses have been issued to out-of-state workers and 600 to retired professionals enlisted in the fight.

Thousands more could be joining them, as temporary emergency licenses are issued for nursing, physician assistant, pharmacy, and respiratory care therapy students who haven’t been able to yet take and pass their exams. 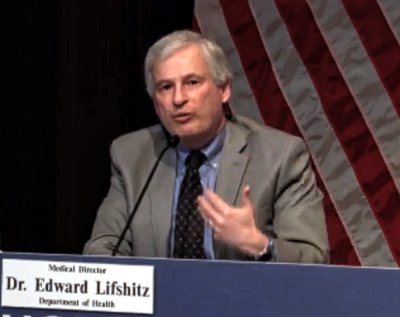 Flexibility in CARES Act billions, a note on counting deaths

Murphy also offered some good news on federal guidance for the $3.4 billion New Jersey received in CARES Act funding, $2.4 billion of which has been allocated to state programs and $1.4 billion to individual counties.

“We have received greater flexibility in how we can use this money, which means more of it will stay in New Jersey to backstop our efforts against COVID-19,” he said.

“I am grateful that we now have greater room to meet some of our immediate needs.”

Of those funds, $467 million in school aid will be disbursed Friday, the governor said. With more flexibility, Murphy said the state will be able to support first responders and small businesses.

“We still have a long way to go,” he said. “We still need billions in direct federal cash assistance. We need Congress to step up in a big way to provide direct revenue to the states.”

As New Jersey continues to study its plans for reopening and recovery, Murphy said officials are working to figure out how to help “non-essential small businesses” reopen, including by offering curbside pickup. He continued to urge residents to have patience as the plans are detailed.

The lag in their reporting comes in coordinating data entered in state hospital databases, collected from health department investigations, the state outbreak investigation team, or from death certificates.

“All those different sources take a different period of time,” Lifshitz said, meaning counts can include deaths from as far back as a month ago. Sometimes the numbers jump because workers enter backlogged information all at once, and sometimes they decrease if the deceased is determined not to have been a New Jersey resident, he said.

Reports from LTC facilities “tend to be more subject to revision,” Lifshitz said, because they are self-reported by the facilities, and require state officials to confirm them.