Trending
You are at:Home»Government»Coronavirus Update: 157,815 Infected, 11,401 Related Deaths; ‘We are still digging out of this,’ Murphy Says

Overall trends in COVID-19 public health data appear encouraging, the governor says, while keeping a weather eye on hospital admissions and discharges that are the highest they’ve been in a week. 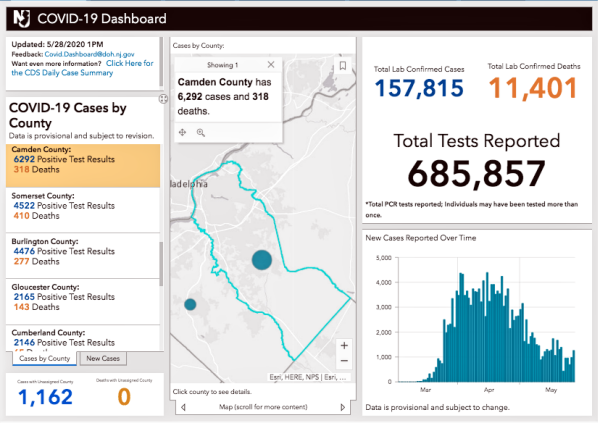 Sadly, 66 more residents have perished from complications related to the virus, bringing the statewide death toll to 11,401 lives lost during the pandemic.

Throughout New Jersey, 2,797 people are hospitalized with a case of COVID-19, or while awaiting confirmation of their symptoms.

Of those 2,797 patients, 740 are in intensive or critical care; 564 of ICU and critical-care patients (76 percent) are on ventilators.

In the past 24 hours, 71 New Jersey hospitals admitted 365 new COVID-19 patients and discharged 287 others, either to a lower-acuity care setting or to their homes.

“These are each the biggest numbers we’ve seen, respectively, in a week,” Murphy said of the hospital admissions and discharges.

Those increases had been anticipated, he said, noting that health officials will track any changes in those numbers closely in the coming days to see whether they’re attributable to a new trend or a lag in reporting.

“Overall, the trajectory remains largely positive,” the governor said, yet warned that, as the most densely populated state in America, “we are still digging out of this.”

Across New Jersey, 537 long-term care (LTC) centers have reported at least one case of COVID-19, and account for 31,312 infected patients and staff, or 20 percent of total cases. 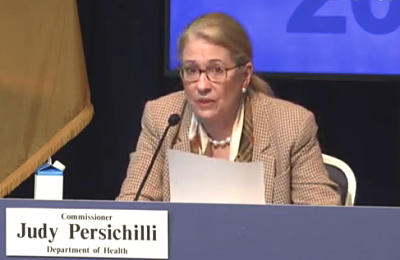 That includes 21,058 residents and 10,254 staffers sickened by the virus, as well as 4,949 lab-confirmed resident deaths (43 percent of the statewide total) and 104 facility-reported staff deaths.

Of 654 veterans residing in a state-run home, 384 residents have tested positive for COVID-19, and 144 have died from complications related to the virus.

Ten veterans presently are hospitalized with COVID-19, and 203 have recovered from the virus.

At state-run psychiatric facilities, 211 of 1,235 patients and 483 staff members have tested positive for COVID-19. Seven staffers and 13 patients have died from complications related to the virus; unchanged since yesterday’s report.

Twenty-four patients are presently receiving care at one of the state’s field medical stations, which have served 467 people in total.

To date, 26 New Jersey children aged 1 to 18 have been diagnosed with multisystem pediatric inflammatory syndrome, said New Jersey Health Commissioner Judy Persichilli. Of them, 18 have tested positive for COVID-19; all were hospitalized, and 12 have been discharged.

COVID-19 cases are doubling at least every 30 days throughout all of New Jersey, save Salem County, which stands at a 22-day doubling rate. The statewide average of COVID-19 spot positivity testing stood at 6 percent May 24.

Spot positivity is a snapshot statistic, and the state’s report excludes serology tests, which can confirm the presence of COVID-19 antibodies, but not whether a patient actively has the virus. 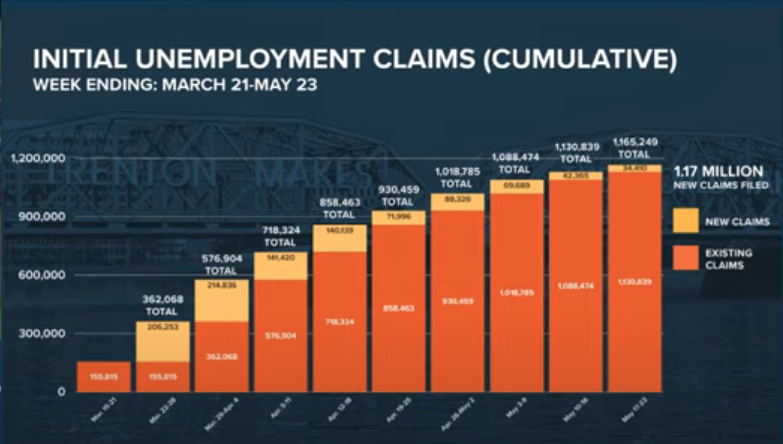 New Jersey continues to churn through its backlog of unemployment cases, as the number of new claims (34,400 last week) has fallen for three consecutive weeks, Murphy said.

To date, 1.17 million New Jerseyans have filed for unemployment, and 911,000 of those claims have been fulfilled to the tune of $4.3 billion, the governor said.

Of that amount, $1.6 billion has been paid from the state unemployment insurance trust fund, and more than $2.7 billion has come from federal funds.

“The ferocity in which this emergency took hold has been felt in every single state, and we are not alone in pushing hard against record levels of new claims,” Murphy said, decrying an economic crisis that he described as “truly national in scope.”

As the country, and New Jersey with it, press on towards recovery, both Murphy and Persichilli urged residents to participate in the 2020 U.S. Census, the data from which inform the number of “health centers built, the location of hospital facilities and resources for improvements, and how many children can access health resources,” Persichilli said.

Asked about the progress of New Jersey’s “temporary emergency medical home confinement” program for nonviolent inmates, which was announced April 10, Murphy’s general counsel Matt Platkin said that 607 inmates have so far been approved for home confinement or parole. Of them, 337 have been released, with the remainder yet to be processed.

As the entirety of New Jersey awaits for word of its reopening, the governor announced that, “beginning tomorrow, we’re going to signal where we’re headed,” including remarks from Lieutenant Governor Sheila Oliver on rental assistance Friday.

Citing encouraging reports in spot positivity, hospitalization, and critical care trends statewide, “there’s a lot of comfort we’re seeing in that data,” Murphy said. However, the governor reinforced his view that the reopening will progress slowly to avoid backtracking.

“The last thing we want to do is give a date, or give a number, and then pull back from something,” Murphy said. “We want to go down this one-way street once; we don’t want to have to do this again.”

Finally, Murphy announced that additional funding has been approved for the U.S. National Guardsmen and women who’ve been bolstering long-term care centers and veterans homes throughout New Jersey. Their operations will continue into August, he said.