Trending
You are at:Home»Government»Coronavirus Update: 3,518 Deaths, 75K Cases; Schools Closed Until May 15, NJ to Consider Raising $9B in Bonding 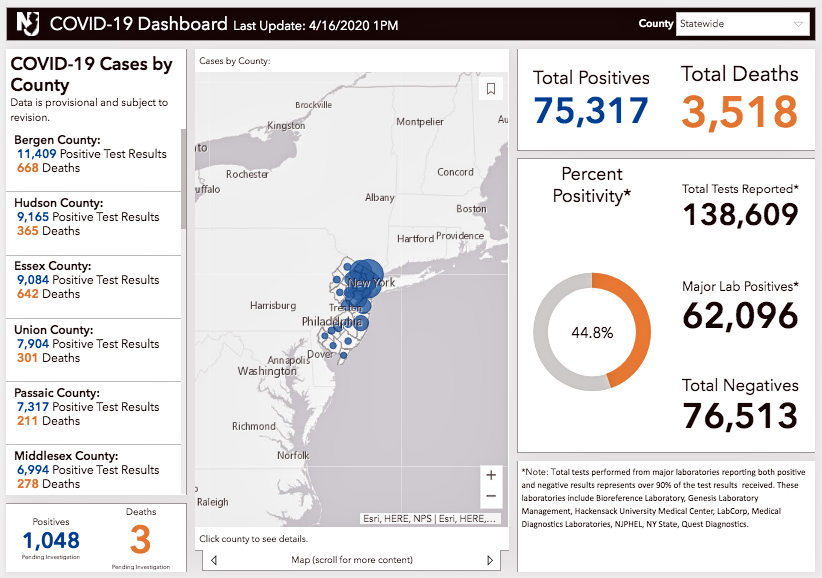 Murphy also announced another 362 New Jerseyans have perished from complications related to COVID-19, bringing the statewide death toll to 3,518 residents—more, he noted, than died in World War I.

Among those 8,224 residents hospitalized by COVID-19 or awaiting confirmation of a test for the virus, 1,880 are in critical or intensive care. Of those, 1,645, or 88 percent, are on ventilators.

Since 10 p.m. Wednesday, 802 New Jersey residents were discharged from hospitals, either home or to lower-acuity care centers, and 46 patients were receiving care in field medical stations across the state.

One of the biggest announcements of Murphy’s briefing was the decision to not reopen schools statewide for at least another four weeks, taking the closure to Friday, May 15.

The timeframe offers “a comfortable enough window to give us a shot, at least one more shot, to reassess” conditions within a month, he said.

“If we all continue to stay the course, in four weeks, we may have a different message at that point,” the governor said. Murphy said he “remain[s]  hopeful” that the state will be able to reopen its schools during the 2020 school year.

The governor called such borrowing “a tool we need to have in our toolkit.” Even after extending tax filing deadlines and pushing the state fiscal year through September 2020, New Jersey could have to defund a variety of programs statewide without an influx of additional direct federal aid, Murphy said.

“I don’t see any other way around it,” Murphy said. “How that impacts credit ratings or other realities we take very seriously, but the fact of the matter is, we are going to have serious cash-flow challenges and serious programmatic challenges. This is going to be real stuff if we don’t find the right sources of money.”

These financial packages are eligible for early repayment should substantial federal aid come through for New Jersey, Murphy said.

“If we don’t get the federal money, folks should assume that we’re gonna have to gut programs, and that would affect everybody in the entire state,” he said. “There’s no way around it.”

In addition to the 90-day “mortgage holidays” for residential homeowners whose finances have been affected by COVID-19, the governor also announced a suspension of all rent increases in 36,000 properties backed by the New Jersey Housing and Mortgage Financing Authority.

He also pointed to rent relief resources through the state Department of Community Affairs.

Economic conditions for out-of-work New Jerseyans during the pandemic remains a significant challenge, even as 429,000 residents are receiving unemployment benefits and the overburdened state labor system works to keep up with historic numbers of applicants.

“The number will continue to rise as new claims are processed,” Murphy said.

Relief is a little farther off for many small business owners, as the $350 billion paycheck protection program (PPP) offered by the federal Small Business Administration has been exhausted. Earlier Thursday, lawmakers said in a business briefing for Camden County small business owners that the program was likely to be re-funded by another act of U.S. Congress, potentially as soon as next week.

“We need to re-up that money,” said U.S. Representative Donald Norcross (D, NJ-01) during the briefing. “It’s there; it’s coming,” he said. 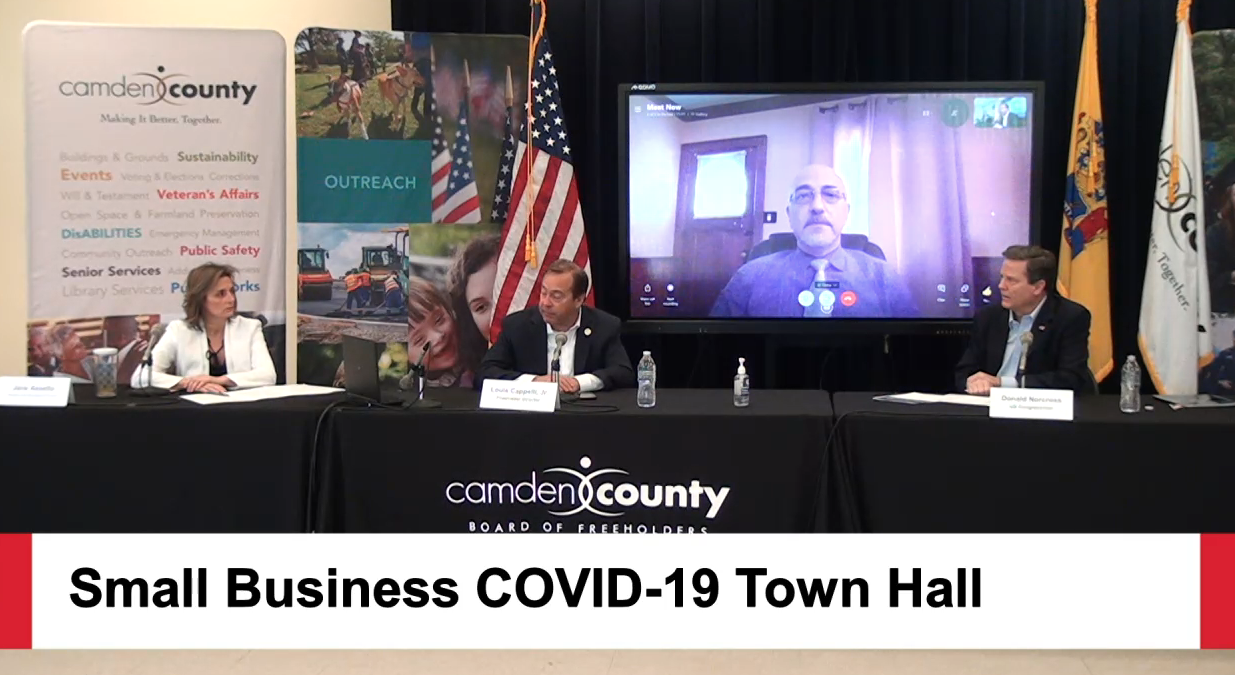 Even without a re-authorization of funds, the New Jersey Small Business Association already has distributed more than $2 billion in PPP loans, said its New Jersey district office director, Alfred Titone.

“We did 14 years worth of lending in two weeks at SBA,” Titone said Thursday.

“Could things have gone better? Yes, but just keep in mind the volume of these loans,” he said.

“The New Jersey record for a year is $900 million and change,” Titone said. “Hopefully there’ll be some better guidance and implementation this time around.”

Finally, New Jersey State Police Colonel Pat Callahan discussed the arrival of the first of 20 refrigerated trailers to house temporarily those who’ve passed during the pandemic while funerary and burial services are suspended.

Four trailers have arrived in North Jersey, and three more are expected, Callahan said. They’ll be used to transport the deceased to “a fixed location in Central Jersey,” he said.

“Right now, we’re just trying to nail down the processes to make sure that they’re, above all, respected and cared for, and that they’re properly tracked in a respectful manner, so when we get to the other side of this, we can release the bodies back to the family members for proper tributes,” Callahan said.

Yesterday, Callahan described the need for crisis counseling among those working in mortuary services statewide, amid their overwhelming levels of dead.

New Jersey Health Commissioner Judy Persichilli urged residents to be mindful of the mental health impacts of the pandemic, acknowledging that “the economic realities of being out of work can be overwhelming.

“Social separation is key to fighting this virus, but it also is keeping us from the direct contact and support of those we depend on,” Persichilli said. She invited residents to use the state mental health hotline—866-202-HELP—for support.