Without adhering to social distancing guidelines, as many as 3 million in New Jersey could be infected, according to Governor Phil Murphy. Nearly 6,400 residents are now hospitalized, with 1,505 in intensive care units. 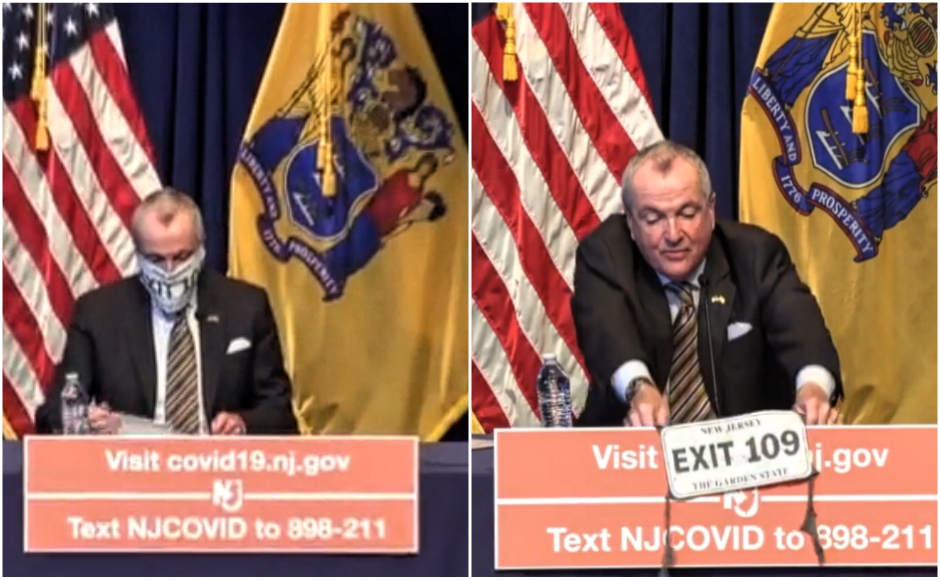 The state also sustained another 86 COVID-19-related deaths, bringing the total to 1,003 lives lost during the pandemic.

Locally, eight more Camden County residents perished from complications related to the virus, and 121 others were newly logged among the infected.

The governor entered his daily video briefing wearing an “Exit 109” cloth facemask, modeling the CDC guidance for asymptomatic individuals to keep their germs within their own breathing radius.

He then seemingly undid the benefit of this example by trying to display the mask in front of the podium before giving up and taking it back.

Murphy was more solid on early projections that social distancing measures appear to be delaying the crush of COVID-19 on the state’s healthcare infrastructure. 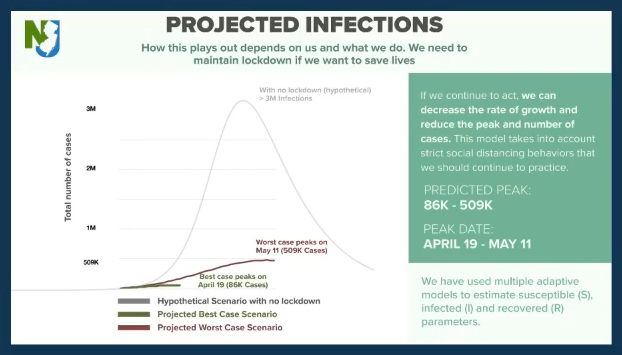 With new cases doubling every six days, peak caseload could be reached anywhere between April 19 and May 11, with as many as 86,000 to 509,000 New Jersey residents infected. The projected count of hospitalizations could peak anywhere from April 10 to April 28, with anywhere from 9,000 to 36,000 cases.

Without the statewide stay-at-home order, the health system may have had to battle as many as 3 million infections, or one-third of the population of the state, the governor said.

Even anticipating “anomalous days with spikes and troughs,” the governor said those data show that “the overall curve is beginning to flatten.

“Our goal is to keep flattening it,” he said.

“The range remains wide, and it remains uncomfortably high at the high end,” Murphy said. “It will be tough, and it will be stressful, but our health system can get through this intact.” 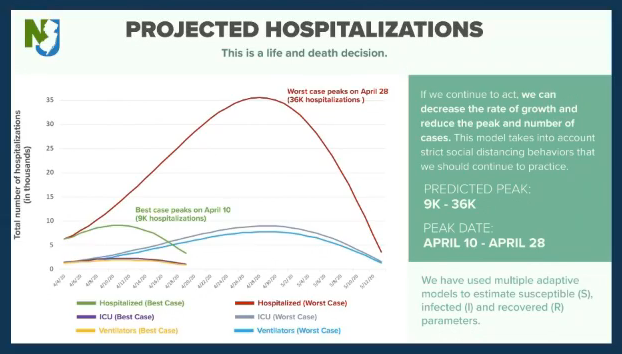 Relaxing social distancing behavior, however, could “overrun” the healthcare system “with a surge four times what it could be,” the governor said.

“That is a nightmare scenario on a good day,” he said. “In a sustained pandemic such as this, it would be literally disastrous.

“If we go to that higher curve, it is not only your life that is in much more danger, but our medical personnel and first responders will be in that much more danger as well,” Murphy said.

“This should be all the incentive we need to keep doing what we’re doing,” he said. “This is not a game. It’s a matter of life and death. 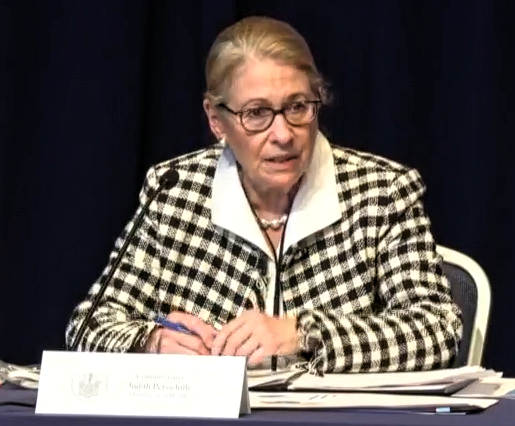 Of the 84,768 COVID-19 tests conducted in the state, 36,826, or 43 percent, were positive for the virus, said New Jersey Health Commissioner Judy Persichilli.

Fifteen of the new deaths were residents of a long-term care facility.

The health commissioner also reported that 6,390 New Jerseyans are presently hospitalized, with 1,505 in intensive care units.

Hospitals are “aggressively working to open alternate care sites,” Persichilli said, and more than 26,000 “care spaces” have been identified statewide. These are in addition to extra in-hospital capacity, beds on the U.S. Navy hospital ship Comfort, and hotel rooms for recovering individuals, she said.

In an effort to recruit more volunteers to address the expanded need for services during the pandemic, Murphy signed an executive order Monday allowing retired public employees to “return to work in whatever capacity they can without affecting their pension status.”

He called for retired law enforcement, nurses, EMTs, and labor department workers to answer the bell, promising to “remove any roadblocks that can keep them from service.”

Leaning on his signature catchphrases to call out violators of the stay-at-home order, Murphy urged “all the jackasses and all the knuckleheads out there” to “get with the program.”

In an effort to drive home the point, the governor shared a widely circulating meme of a soldier carrying a donkey on his back, purportedly to show that the ignorant are the most dangerous in a crisis.

However, the miscaptioned image was not from a World War II-era soldier in a minefield, but from a French legionnaire in Algeria in 1958.

Murphy’s “knucklehead row” recap from the weekend included a Rumson man who was charged with violating the stay-at-home order for allegedly organizing a house concert by a Pink Floyd cover band on April 4. Partygoers who allegedly cursed out police officers and compared them to Nazis for breaking up the gathering also have been charged.

While defending police officers, the governor identified himself as “a Syd Barrett-era Pink Floyd fan,” and urged residents not to attack law enforcement for enforcing his stay-at-home directive, which he described as “a life-and death decision.”