Trending
You are at:Home»Government»Coronavirus Update: 839,114 Infections, 22,323 Related Deaths, Hospitalizations Shift to Patients Under 60, Variants Up

Plus: New Jersey will see its allocation of the one-shot Johnson & Johnson COVID-19 vaccine formulation drastically reduced in the coming weeks, even as the state hits 5 million doses. 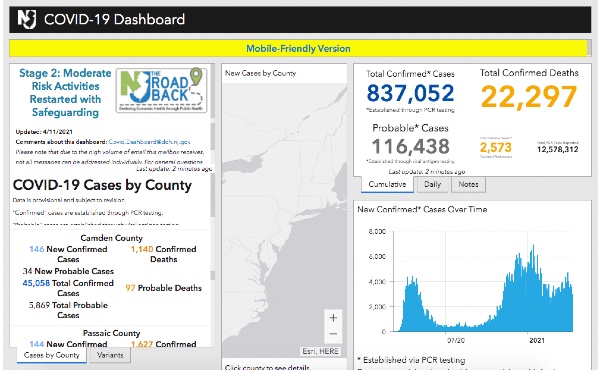 Sadly, 27 more residents have perished from complications related to the virus, bringing the statewide, confirmed death toll to 22,323 lives lost during the pandemic.

In addition to those lab-confirmed fatalities, the state has acknowledged another 2,573 probable COVID-19-related deaths.

More than 12.578 million polymerase chain reaction (PCR) tests for COVID-19 have been performed statewide, with an 9.52-percent positivity rate per 100,000 residents.

The statewide average of COVID-19 spot positivity testing based on PCR test results stood at 8.39 percent April 8; in South Jersey, it was higher, at 8.80 percent.

Rt, the variable that describes the seven-day, rolling-average, statewide rate of transmission of new COVID-19 cases, hit 0.94 on April 10.

Among those hospitalized patients, 448 are in intensive or critical care, and 241 of the ICU and critical-care patients (54 percent) are on ventilators.

In New Jersey’s 71 critical care hospitals, 255 patients were hospitalized with COVID-19 yesterday, while 233 others were discharged.

“Overall, 48 percent of the new hospitalizations were under the age of 60,” New Jersey Health Commissioner Judy Persichilli said. “This is a shift from our prior experience.”

Across the state, long-term care (LTC) centers have reported 1,365 cumulative outbreaks of COVID-19, and 230 are dealing with an active outbreak. LTCs account for 54,344 infected patients and staff in New Jersey, or 6.5 percent of total cases.

That includes 32,629 residents and 21,715 staffers sickened by the virus, as well as 7,999 lab-confirmed resident and staff deaths (36 percent of the statewide confirmed total), with facilities self-reporting 142 staff deaths.

Presently, four veterans are hospitalized with COVID-19; 300 have recovered from the virus.

Asked about potential impediments to New Jersey reaching its 70-percent-of-population vaccination threshold, Murphy said “the biggest hole continues to be long-term care staff,” among whom vaccinations seemingly have stalled despite Persichilli’s efforts.

“That’s something that’s got to change,” the governor said.

To date, 114 New Jersey children aged 1 to 18 have been diagnosed with pediatric multisystem inflammatory syndrome (MISC), Persichilli said. Four of those cases were reported in Camden County, tied with Cumberland and Monmouth Counties for third-least in the state.

Since August 1, 2020, 240 COVID-19 outbreaks encompassing 1,070 individual cases have been traced to schools in 19 New Jersey counties. In Camden County, 16 outbreaks have been linked to 74 cases, fifth-most in the state.

Across New Jersey, 5.440 million COVID-19 inoculations have been administered, and 3.461 million people have received at least one vaccine dose.

Throughout the state, 2.192 million people are fully vaccinated, having received either a one-shot formulation from Johnson and Johnson or both doses of the two-shot Pfizer or Moderna vaccines.

In Camden County, 323,235 doses have been administered; seventh-most in the state.

The first vaccines in the state were administered December 15, 2020; by February 8—55 days later—New Jersey had immunized its millionth resident. Twenty days thereafter, that count hit 2 million, and 3 million within two more weeks. On March 29, New Jersey crossed the 4-million-dose threshold; it cleared 5 million doses over the weekend of April 10, 2021.

New Jersey will see a reduced allocation of the one-shot Johnson & Johnson COVID-19 vaccine formula in the coming weeks, Persichilli cautioned. From 131,000 doses received in the state last week, New Jersey will see its J&J allocation down to 15,600 this week, and down to as few as 5,200 doses next week.

“Since J&J is going to be scarce, and we want as many people as possible to be vaccinated, please take whatever dose is available to you,” Persichilli said. 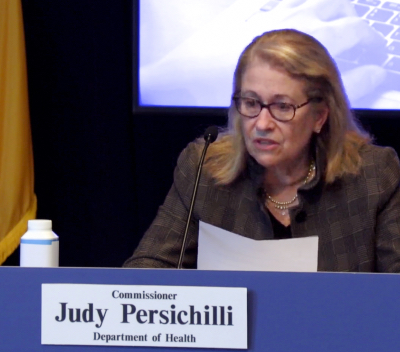 Mutated offshoots of COVID-19, or “variants of concern,” continue to circulate throughout New Jersey; Persichilli reported that the state has traced 958 such cases to date.

It’s associated with a 50-percent increase in COVID-19 transmission over earlier strains of the virus detected in New Jersey, “and likely increased severity, based on hospitalization and case fatality rates,” Persichilli said.