Several gathering restrictions will be loosened starting May 7—three days earlier than previously planned—and relaxed even more fully May 19. 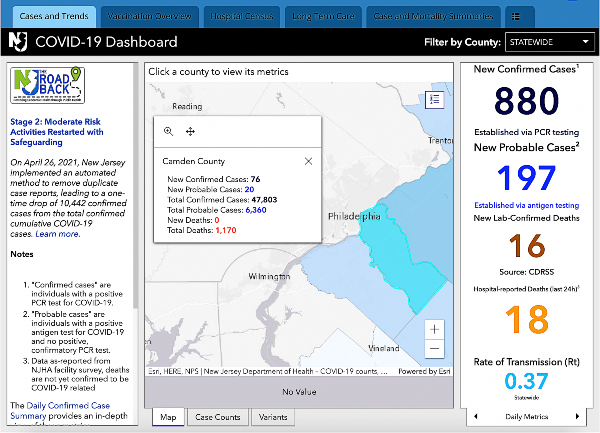 Sadly, 16 more residents have perished from complications related to the virus, bringing the statewide, confirmed death toll to 22,991 lives lost during the pandemic.

In addition to those lab-confirmed fatalities, the state has acknowledged another 2,625 probable COVID-19-related deaths.

More than 13.533 million polymerase chain reaction (PCR) tests for COVID-19 have been performed statewide, with an 9.965-percent positivity rate per 100,000 residents.

The statewide average of COVID-19 spot positivity testing based on PCR test results stood at 4.94 percent April 29; in South Jersey, it was highest, at 6.78 percent.

Rt, the variable that describes the seven-day, rolling-average, statewide rate of transmission of new COVID-19 cases, hit 0.37 on April 26—an eight-month low, albeit one statistically misrepresentative, given that the state identified 10,000 duplicate, positive cases in its counts for that day.

Among those hospitalized patients, 325 are in intensive or critical care, and 197 of the ICU and critical-care patients (61 percent) are on ventilators.

New Jersey Health Commissioner Judy Persichilli noted that the state’s hospital metrics are at lows unseen since June 2020, after the initial wave of the virus had subsided across the state.

In New Jersey’s 71 critical care hospitals, 128 patients were hospitalized with COVID-19 yesterday, while 148 others were discharged.

Across the state, long-term care (LTC) centers have reported 1,424 cumulative outbreaks of COVID-19, and 218 are dealing with an active outbreak. LTCs account for 54,966 infected patients and staff in New Jersey, or 6.2 percent of total cases.

That includes 32,858 residents and 22,108 staffers sickened by the virus, as well as 8,030 lab-confirmed resident and staff deaths (35 percent of the statewide confirmed total), with facilities self-reporting 286 staff deaths.

Of 614 veterans residing in three state-run homes, 456 residents have tested positive for COVID-19, and 156 have died from complications related to the virus. The facilities at Menlo Park, Paramus, and Vineland are staffed by 1,344 workers, six of whom are presently COVID-19-positive. The facilities have sustained two staff deaths related to the virus.

Presently, one veteran is hospitalized with COVID-19; 300 have recovered from the virus.

Across New Jersey, 7.493 million COVID-19 inoculations have been administered.

Throughout the state, 3.112 million people are fully vaccinated, having received either a one-shot formulation from Johnson and Johnson or both doses of the two-shot Pfizer or Moderna vaccines.

In Camden County, 388,932 doses have been administered; seventh-most in the state.

Persichilli also noted that an estimated 357,874 New Jersey residents have received a vaccine dose outside of the state, of which 156,261 are estimated to have been fully vaccinated.

The state is working to make access to vaccinations easier to come by, facilitating walk-up vaccinations at its vaccine megasites—no appointments necessary—and incentivizing inoculations with free beers at participating breweries. 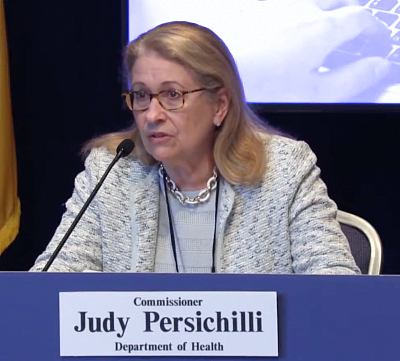 Mutated offshoots of COVID-19, or “variants of concern,” continue to circulate throughout New Jersey; the state has traced 3,147 such cases to date. 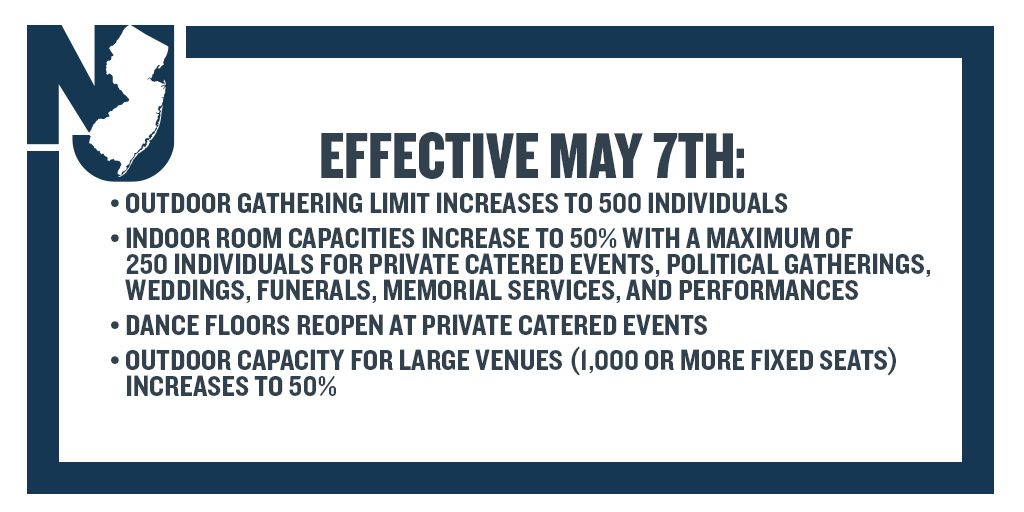 In coordination with similar changes coming to neighboring New York and Connecticut, New Jersey will move up its reopening timetable to May 7, rolling back restrictions that had been set to relax by May 10. Included in these rollbacks are requirements to maintain social distancing and face coverings indoors (and outdoors when unable to keep six feet apart).

Indoor, catered events, including political events, weddings, funerals, memorial services, and performances, will also increase from 35 to 50 percent of capacity, up to 250 people.

Dance floors at private, catered events will be allowed to open with dancers masked and in socially distanced groups; dance floors at bars and nightclubs will remain closed.

Carnivals and fairs will be allowed to operate at the same capacity as outdoor amusements, the prohibition on indoor bar seating will be lifted, as will restrictions on self-service food, like buffets. 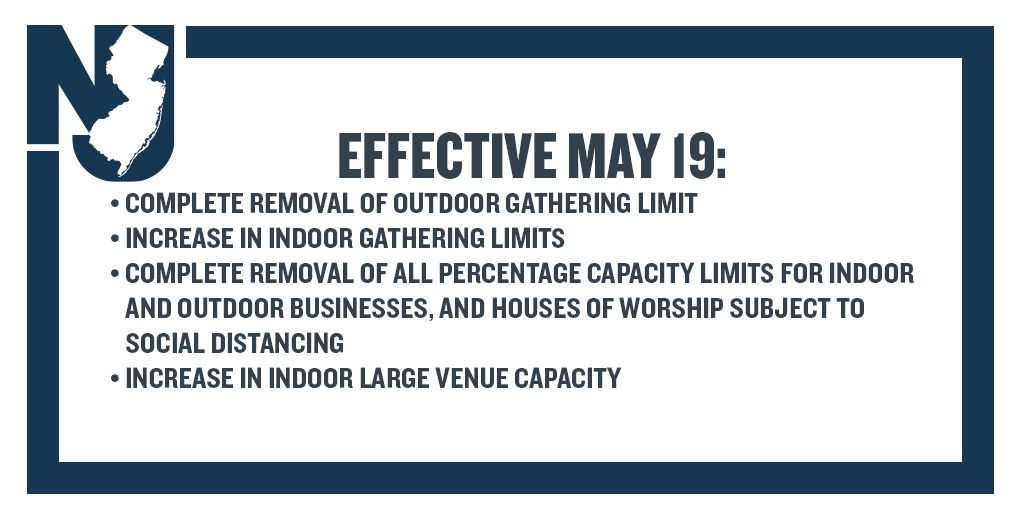 If its numbers continue to improve, New Jersey will also restore its indoor retail and service businesses to full capacity starting May 19, with patrons required to remain masked and socially distant. These actions align with those taking place in New York and Connecticut along the similar timetable.

“This new distance-based maximum capacity will apply across commercial settings, including retail, food services, gyms and fitness centers, amusement and family entertainment, hair salons, barber shops and other personal care services, among other settings,” Murphy said in a written statement.

“Businesses will only be limited by the space available for patrons, or parties of patrons, to maintain the required social distance of six feet,” he said.

Attendees at outdoor gatherings will still be required to remain six feet apart from other groups, but no gathering limits will be in effect starting May 19. Indoors, the limit for general social gatherings, including parties and in-home events, will be raised from 25 to 50 people.

“Any business, whether indoors or outdoors, that is subject to a percentage capacity limitation will instead be guided by the rule regarding six feet of distance between persons or groups of persons,” Murphy said in his announcement.

The rule will apply to restaurants, houses of worship, gyms, salons and other personal care services, recreational businesses, and pools.

By the same token, indoor catered events, funerals, memorial services, performances, and political activities will no longer face percentage-based capacity restrictions starting May 19, only social distance restrictions, up to 250 individuals.

The bulk of the remaining restrictions will likely remain in place until such time as the U.S. Centers for Disease Control (CDC) revises its guidance about the necessity for social distancing, Murphy said. That will affect indoor capacities at businesses including bars and restaurants, although the governor pointed to the resumption of bar and buffet service as some consolation for the time being.