Gov. Phil Murphy described current conditions as ‘a pandemic of unvaccinated people,’ and urged New Jersey residents to get the vaccine and understand the risks of not doing so. 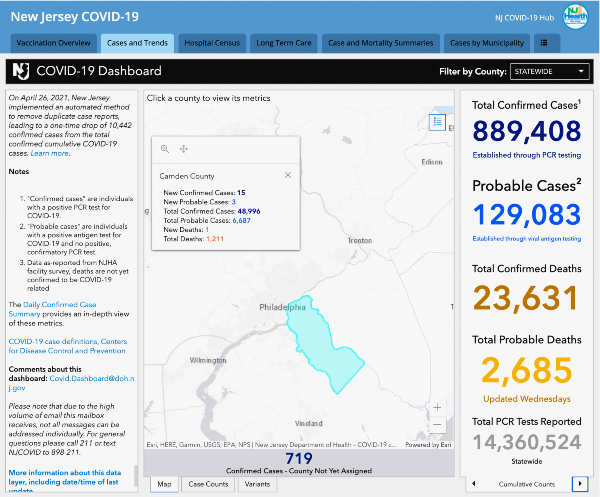 “We are now consistently reporting our lowest numbers of confirmed cases since last July, when we were in the deepest part of our summer lows,” Murphy said.

Sadly, 14 more residents have perished from complications related to the virus, bringing the statewide, confirmed death toll to 23,631 lives lost during the pandemic.

In addition to those lab-confirmed fatalities, the state has acknowledged another 2,685 probable COVID-19-related deaths—seven more than previously reported.

More than 14.360 million polymerase chain reaction (PCR) tests for COVID-19 have been performed statewide, with a 10.114-percent positivity rate per 100,000 residents.

Rt, the variable that describes the seven-day, rolling-average, statewide rate of transmission of new COVID-19 cases, hit 0.73 on June 9.

Throughout New Jersey, 436 people currently are hospitalized with a suspected (94) or confirmed (342) case of COVID-19, Murphy said.

Among those hospitalized patients, 104 are in intensive or critical care, and 60 of the ICU and critical-care patients (58 percent) are on ventilators.

In New Jersey’s 71 critical care hospitals, 37 patients were hospitalized with COVID-19 yesterday, while 61 others were discharged.

Across the state, long-term care (LTC) centers have reported 1,472 cumulative outbreaks of COVID-19, and 77 are dealing with an active outbreak. LTCs account for 54,976 infected patients and staff in New Jersey, or 6.2 percent of total cases.

That includes 32,755 residents and 22,221 staffers sickened by the virus, as well as 8,058 lab-confirmed resident and staff deaths (34 percent of the statewide confirmed total), with facilities self-reporting 144 staff deaths.

Of 623 veterans residing in three state-run homes, 456 residents have tested positive for COVID-19, and 156 have died from complications related to the virus. Three hundred veterans have recovered from the virus.

The facilities at Menlo Park, Paramus, and Vineland are staffed by 1,335 workers, two of whom are presently COVID-19-positive. The facilities have sustained two staff deaths related to the virus.

At state-run psychiatric facilities, 367 of 1,122 patients and 1,075 staff members have tested positive for COVID-19. Fourteen patients and eight staffers have died from complications related to the virus.

Across New Jersey, 9.356 million COVID-19 inoculations have been administered.

Throughout New Jersey, 4.261 million people have been fully vaccinated in-state, having received either a one-shot formulation from Johnson and Johnson or both doses of the two-shot Pfizer or Moderna vaccines.

In Camden County, 493,555 doses have been administered; seventh-most in the state.

An estimated 357,974 New Jersey residents have received a vaccine dose outside of the state, of which 169,560 are estimated to have been fully vaccinated.

The most common COVID-19 variant in the United States is the B.1.1.7, or “UK” variant, which has been detected in all 21 New Jersey counties. It accounts for more than 54 percent of the variants identified in the past month, Persichilli said, noting that health officials have switched from reporting specific numbers of variants in the state to details about the prominence of specific strains of the virus.

Strain B.1.526, which originated in New York state, represents 16 percent of the variants identified in New Jersey in that time, and is a “variant of interest,” Persichilli said.

The P.1 “Brazilian” variant accounts for 3.5 percent of the variants identified in the past month, and B.1.617.2, which originated in India, accounted for 3.1 percent of all specimens sequenced in the past four weeks. 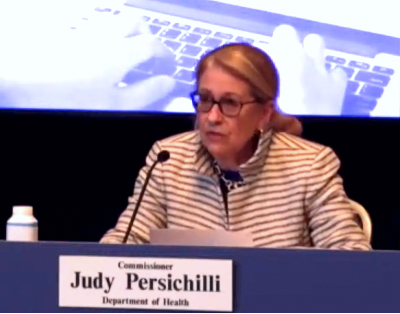 Of the 1,319 breakthrough cases, 505 had symptoms, 377 did not, and information wasn’t available on 437 others. From the same group, 30 were hospitalized, and seven ultimately perished from complications related to COVID-19, Persichilli said. Hospitalizations and deaths were only seen among those aged 50 and older, and half of those deaths were of people aged 80 and older.

“It is quite obvious that this is a pandemic right now of unvaccinated people,” Murphy said, citing the “de minimis” instances of breakthrough cases. “The data is overwhelming, and we owe that to people to make sure you know what the facts are and the risks of being unvaccinated.”