The delta variant, first identified in India in 2020, is now the most common variant in the United States. Health officials urge residents to continue getting vaccinated as NJ exceeds 10 million doses administered. 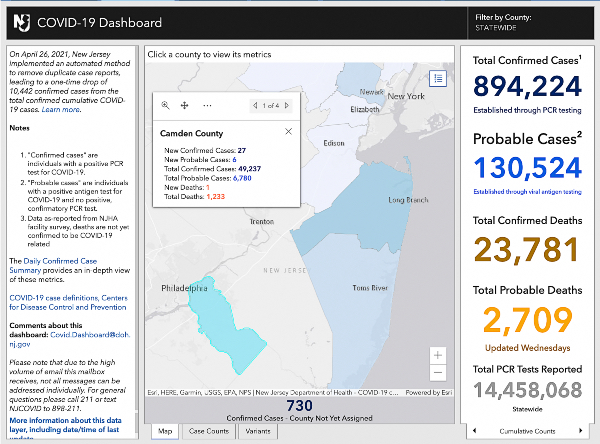 Sadly, eight more residents have perished from complications related to the virus, bringing the statewide, confirmed death toll to 23,781 lives lost during the pandemic.

In addition to those lab-confirmed fatalities, the state has acknowledged another 2,709 probable COVID-19-related deaths—six more than previously reported.

More than 14.458 million polymerase chain reaction (PCR) tests for COVID-19 have been performed statewide, with a 10.169-percent positivity rate per 100,000 residents.

The statewide average of COVID-19 spot positivity testing based on PCR test results stood at 1.45 percent July 3; in South Jersey, it was lower, at 1.2 percent.

Rt, the variable that describes the seven-day, rolling-average, statewide rate of transmission of new COVID-19 cases, hit 0.95 on July 7.

Throughout New Jersey, 310 people currently are hospitalized with a suspected (73) or confirmed (237) case of COVID-19, Murphy said.

Among those hospitalized patients, 51 are in intensive or critical care, and 23 of the ICU and critical-care patients (45 percent) are on ventilators.

In New Jersey’s 71 critical care hospitals, 32 patients were hospitalized with COVID-19 yesterday, while 28 others were discharged.

Murphy again noted this week that the bulk of those people hospitalized with the virus are not vaccinated against it.

“The simple reality is that we do not have a pandemic among the vaccinated,” he said. “Folks, please go out and get vaccinated.”

Across the state, long-term care (LTC) centers have reported 1,487 cumulative outbreaks of COVID-19, and 16 are dealing with an active outbreak. LTCs account for 55,025 infected patients and staff in New Jersey, or 6.2 percent of total cases.

That includes 32,796 residents and 22,229 staffers sickened by the virus, as well as 8,063 lab-confirmed resident and staff deaths (34 percent of the statewide confirmed total), with facilities self-reporting 144 staff deaths.

Of 633 veterans residing in three state-run homes, 456 residents have tested positive for COVID-19, and 156 have died from complications related to the virus. Three hundred veterans have recovered from the virus. No resident is currently COVID-19-positive.

The facilities at Menlo Park, Paramus, and Vineland are staffed by 1,340 workers, one of whom is presently COVID-19-positive. The facilities have sustained two staff deaths related to the virus.

At state-run psychiatric facilities, 367 of 1,133 patients and 1,080 staff members have tested positive for COVID-19. Fourteen patients and eight staffers have died from complications related to the virus.

To date, 128 New Jersey children aged 1 to 18 have been diagnosed with pediatric multisystem inflammatory syndrome (MISC). Four of those cases were reported in Camden County, tied with Cumberland and Monmouth Counties for third-least in the state.

Across New Jersey, 10.059 million COVID-19 inoculations have been administered.

Throughout New Jersey, 4.915 million people have been fully vaccinated in-state, having received either a one-shot formulation from Johnson and Johnson or both doses of the two-shot Pfizer or Moderna vaccines.

In Camden County, 533,105 doses have been administered; seventh-most in the state.

An estimated 352,743 vaccine doses have been administered to New Jersey residents outside of the state, of which 151,895 are estimated to have been fully vaccinated.

In communities where vaccinations lag behind the state rates, and health officials have been sent door-to-door to drive them up, New Jersey Health Commissioner Judy Persichilli said health workers have uncovered myriad “social service reasons” for the differences. These include an inability to get time away from work, a lack of weekend or off-hours appointment times, and most significantly, transportation barriers.

“We get weekly reports on every single door we knock on,” Persichilli said. 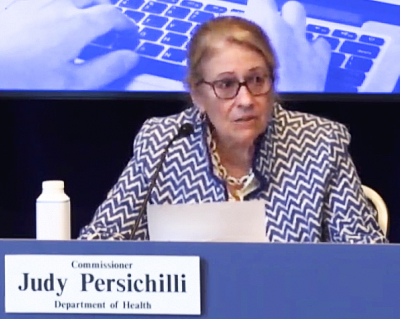 B.1.617.2 ‘Delta’ variant second-most common in NJ amid national surge

Two weeks ago, Persichilli noted that the U.S. Centers for Disease Control (CDC) believed the B.1.617.2 “delta” variant, initially identified in India in December 2020, could become the leading variant in the United States within the next month.

On Wednesday, that prediction was fulfilled.

The delta variant is now the most common variant in the United States, surpassing the B.1.1.7 “alpha variant” first discovered in the United Kingdom, the commissioner said, citing “a steady rise” in its prevalence.

Some health experts believe that the delta variant can be spread asymptomatically by vaccinated people, as Business Insider reported Wednesday, while simultaneously noting that early studies seem to indicate that presently available vaccine formulations remain effective at preventing death and serious illness against the variant.

In the last four weeks, the delta variant has risen to account for 26.8 percent of all variant cases in New Jersey, up from 15.6 percent the previous week; it’s nearly doubled twice in the past three weeks alone. For the moment, however, the alpha variant remains the predominant variant in New Jersey.

The New Jersey Communicable Disease Service also continues to track variant B.1.526, which originated in New York state, the P.1 “Brazilian” variant, and the California variants B.1.427 and B.1.429.