Plus: health officials continue to track new ‘variants of concern,’ and the head of the state Communicable Disease Service says not everyone is taking appropriate precautions a year-and-a-half into the pandemic. 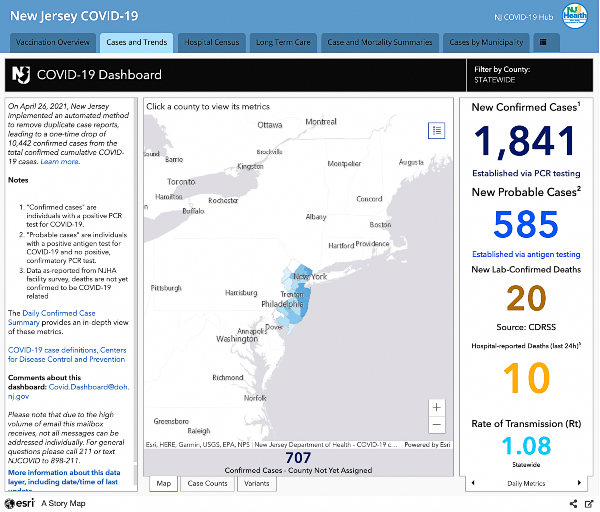 Sadly, 20 more residents have perished from complications related to the virus, bringing the statewide, confirmed death toll to 24,171 lives lost during the pandemic.

In addition to those lab-confirmed fatalities, the state has acknowledged another 2,722 probable COVID-19-related deaths—two more than previously reported.

More than 15.075 million polymerase chain reaction (PCR) tests for COVID-19 have been performed statewide, with a 10.826-percent positivity rate per 100,000 residents.

The statewide average of COVID-19 spot positivity testing based on PCR test results stood at 6.98 percent August 28; in South Jersey, it was highest, at 8.84 percent.

Rt, the variable that describes the seven-day, rolling-average, statewide rate of transmission of new COVID-19 cases, hit 1.08 on September 1.

Any Rt figure greater than 1.0 means that each new COVID-19 patient is infecting fewer than one other person, on average, and the spread of the virus is decreasing.

Hospitalizations up 22 percent in two weeks

Among those hospitalized patients, 211 are in intensive or critical care, and 108 of the ICU and critical-care patients (51 percent) are on ventilators.

In New Jersey’s 71 critical care hospitals, 167 patients were hospitalized with COVID-19 yesterday, while 151 others were discharged.

Despite seeing “some leveling-off of cases and hospitalizations,” New Jersey has seen a 22-percent increase in people hospitalized by COVID-19 although over the last two weeks, said New Jersey Health Commissioner Judy Persichilli.

However, “when we compare ourselves to other states, we’re in much better shape,” Persichilli said, noting that along with its neighbors in Connecticut, Massachusetts, and New York, New Jersey is “clustered at the lower end of [newly reported COVID-19]. cases.”

Across the state, long-term care (LTC) centers have reported 1,645 cumulative outbreaks of COVID-19, and 140 are dealing with an active outbreak. LTCs account for 55,984 infected patients and staff in New Jersey, or 5.8 percent of total cases.

That includes 33,313 residents and 22,671 staffers sickened by the virus, as well as 8,471 lab-confirmed resident and staff deaths (34 percent of the statewide confirmed total), with facilities self-reporting 144 staff deaths.

Of 648 veterans residing in three state-run homes, 456 residents have tested positive for COVID-19, and 156 have died from complications related to the virus. Three hundred veterans have recovered from the virus. No resident is currently COVID-19-positive; three staffers presently are.

The facilities at Menlo Park, Paramus, and Vineland are staffed by 1,370 workers, one of whom is presently COVID-19-positive. The facilities have sustained two staff deaths related to the virus.

At state-run psychiatric facilities, 372 of 1,133 patients and 1,080 staff members have tested positive for COVID-19. Fourteen patients and eight staffers have died from complications related to the virus.

To date, 130 New Jersey children aged 1 to 18 have been diagnosed with pediatric multisystem inflammatory syndrome (MISC). Four of those cases were reported in Camden County, tied with Cumberland and Monmouth Counties for third-least in the state.

Across New Jersey, 11.135 million COVID-19 inoculations have been administered.

Throughout New Jersey, 5.423 million people have been fully vaccinated in-state, having received either a one-shot formulation from Johnson and Johnson or both doses of the two-shot Pfizer or Moderna vaccines.

In Camden County, 590,139 doses have been administered; seventh-most in the state.

An estimated 404,540 vaccine doses have been administered to New Jersey residents outside of the state, of which 174,999 residents are estimated to have been fully vaccinated.

By mid-July, that number had increased to 5.019 people fully vaccinated at New Jersey vaccination sites. By the end of August 2021, the state had exceeded 11 million doses administered and was approaching 6 million fully vaccinated residents.

As New Jersey prepares its infrastructure to help dispense additional doses of the COVID-19 vaccine for those who need it, Murphy offered some comparison on the differences between booster doses—those taken by people with healthy immune systems—and third doses, which are intended as the final installment of a series of shots for those with compromised immunity.

The governor said health officials are awaiting guidance on whether those requiring a booster should get it eight or six months after having completed their one- or two-shot regimens.

In keeping with the statewide mandate for all school staff and contractors to be fully vaccinated by October 15 or face routine COVID-19 testing, the governor announced some $267 million in additional funds would be available to support said testing.

School districts may use state-contracted vendors for end-to-end testing services, or can ask for funding to support their own in-house testing programs that may already be in place, Murphy said.

“We don’t know how far, at this point, the money will actually go as we provide these tests at no cost,” the governor said, promising to “find federal money to make up the balance” of any shortfall.

Persichilli noted that, in order to qualify for the funding, “districts must develop a testing plan that meets the state guidelines,” and which is a component of a layered COVID-19 prevention approach that includes common mitigation strategies like masking, hand-washing, physical distancing, and staying home when sick or symptomatic.

Those who are vaccinated fully do not need to participate in the routine testing, she added. That includes 44 percent of New Jersey children aged 12 to 17; the commissioner also said that 55 percent of people in that same age cohort have received at least one vaccine dose. 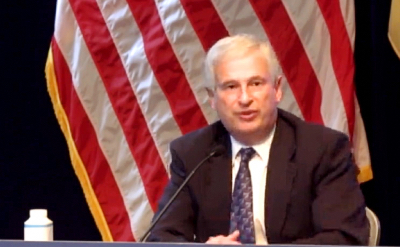 New variants? NJ on the rebound?

As health officials have seen the impact of the B.1.617.2 “Delta” variant play out across a 12-week period internationally, Persichilli said it’s uncertain whether Americans will enjoy the same relief as Delta has abated overseas.

She did not confirm whether any such cases have been identified yet in New Jersey.

“I almost see two different states,” Lifshitz said: people who are adhering to COVID-19 precautions, and those who are “acting as if COVID has been completely defeated,” and contributing to the continued spread of the virus.

Lifshitz also said that he would not be surprised to see an uptick in cases as the school year resumes, explicitly adding, “If we were not going into a school year, we would be seeing drop-offs.”