Plus: Governor Phil Murphy tells Republican leader Mitch McConnell, ‘Come on, man,’ after McConnell suggests that states should be allowed to declare bankruptcy in the crisis. 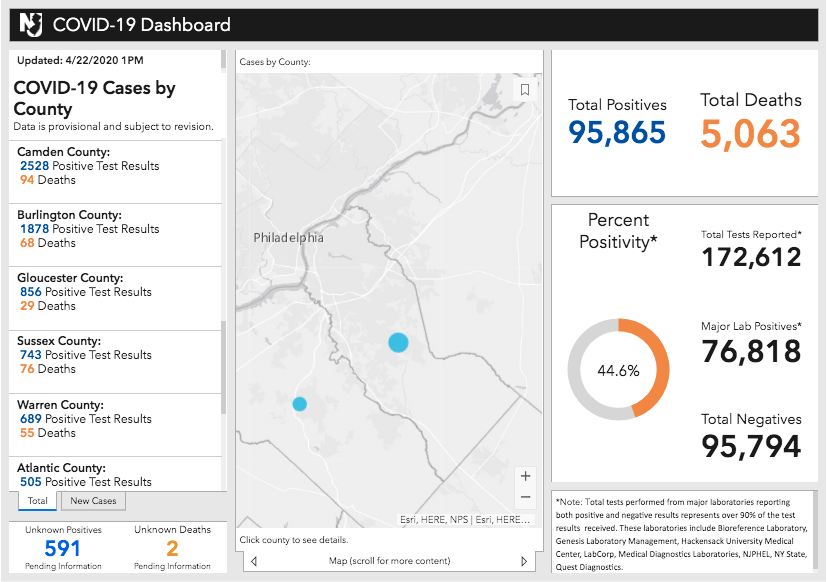 Murphy also marked the passing of 314 more residents due to complications related to the virus, as the statewide total climbed to 5,063 lives lost in the pandemic.

Ten of those lost were Camden County residents.

Throughout New Jersey, 7,210 people are hospitalized with COVID-19 or awaiting confirmation of their status.

Of those patients, 1,983 are in critical or intensive care, and 1,570 are on ventilators, or 79 percent—“the lowest percentage we have had in over four weeks,” New Jersey Health Commissioner Judy Persichilli said.

Finally, Murphy noted that 745 patients have been discharged from New Jersey hospitals in the past 24 hours, versus 361 new hospitalizations—an encouraging start to flattening the overall trend line in new cases.

However, without widespread, rapid-results testing, the total number of infected residents is unknown. In the absence of that information, officials are leaning on hospitalization and discharge data, which Murphy described as the most useful, concrete numbers available.

“This is the reality that our 71 hospitals are living right now,” the governor said.

Murphy said that discharge versus readmission rates are “invaluable in letting us and you know where things are today” as well as forecasting “where we’re headed in the future,” which includes the potential of a spike in new cases around any relaxation of the stay-at-home orders. 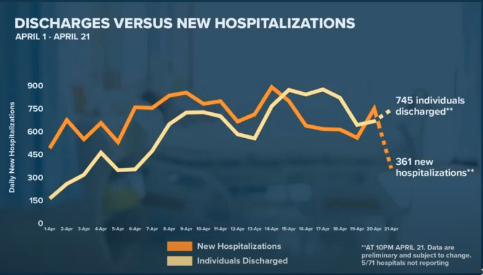 To that end, New Jersey officials are organizing a tri-state COVID-19 contact tracing program with Connecticut and New York.

The state is also preparing for the possibility of needing its field stations in Edison, Secaucus, and Atlantic City to be available for the remainder of the year, and possibly beyond.

“We may need the capacities we are preparing for, even if we do everything right and we get it exactly right,” Murphy said.

“Not only might we need this in the current surge, but we may well need it in the fall or winter of next year.”

As the rate of new cases doubles faster in the south than in the north (in Camden County, it’s every 11 days), Persichilli noted that hospitals continue to divert patients for lack of available critical care beds. Overnight, she said six hospitals in the state were on divert, four of them in Central Jersey, where cases are increasing, and two in North Jersey, where they’re flattening.

(A niche takeaway from Persichilli’s notes for fans of the North/South/Central Jersey tug-of-war was the commissioner’s geographic county breakdown, as follows: 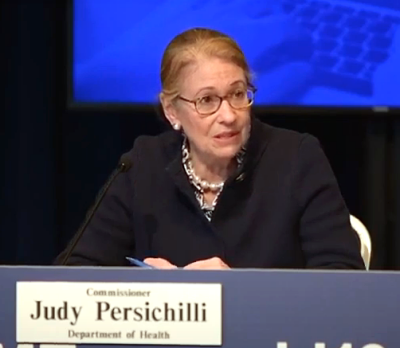 The New Jersey Department of Health is working to reconcile those data, Persichilli said, as they are self-reported, “and some of the long-term care facilities have shared with us that their death reporting seems to be not correct.

“Positive employees were counted with positive residents, so the number looked higher,” she said.

“We really have to sort through that, because we really do not have a significant reporting of employee mortalities,” Persichilli said. “We will make sure, by death certificate, that we are counting all of the deaths appropriately.”

Persichilli also commented on why the outbreaks in the close-quartered facilities may have occurred, including reported shortages on housekeeping products and failure to follow CDC disinfection guidances. Long-term care centers are still having difficulty isolating dementia patients, and are “working on innovative ways” to resolve those challenges given those patients’ conditions.

In the state’s veterans homes, which house 741 residents, 183 have tested positive, and 80 have died from complications related to the virus.

Amid the quest for refined data accuracy, Murphy signed into law a bill that will require hospitals to report demographic and racial data for all COVID-19-positive residents, including those admitted to hospitals, those who tried to get tested and failed, and those who died from complications related to the virus.

“We can already tell from the preliminary data… that this emergency has had an outsized impact on our communities of color,” the governor said. 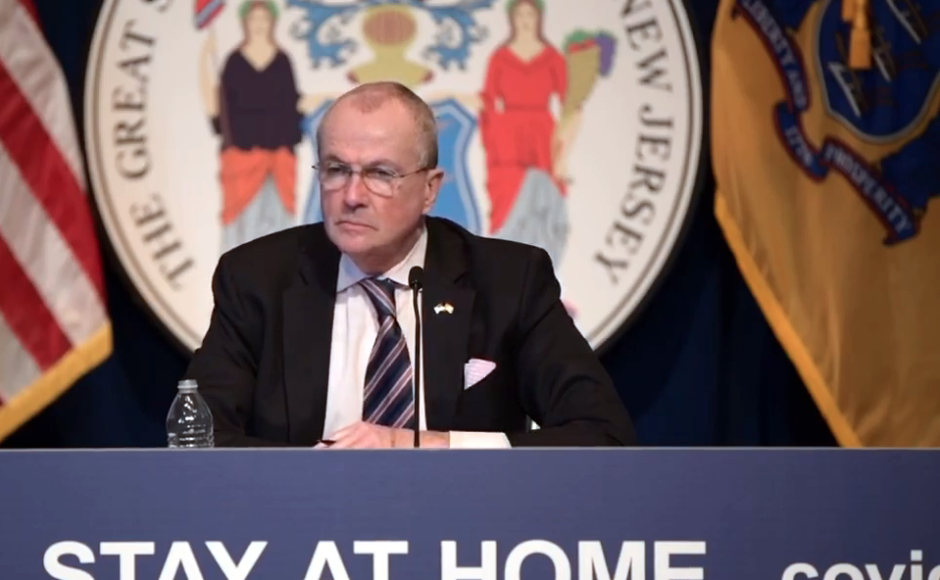 Finally, when discussing the possibility of additional federal relief for New Jersey, Murphy took a minute in his remarks to blast U.S. Senate Majority Leader Mitch McConnell (R, KY), who, in a radio interview Wednesday said he’d “certainly be in favor of allowing states to use the bankruptcy route” instead of approving direct state assistance to deal with the impact of the pandemic.

“It saves some cities. And there’s no good reason for it not to be available,” McConnell told talk show host Hugh Hewitt.

“My guess is their first choice would be for the federal government to borrow money from future generations to send it down to them now so they don’t have to do that. That’s not something I’m going to be in favor of,” McConnell said.

“Number one: Come on, man,” the governor said.

“Encouraging, engendering explicitly, almost hoping for bankruptcies of American states in the midst of the biggest healthcare crisis this country has ever faced is completely and utterly irresponsible,” Murphy said.

“Secondly, as usual, he’s dead wrong. You have my word we won’t go bankrupt. But you know what will happen? We will gut the living daylights out of every state in America of the exact services that our citizens need right now.

Without additional aid, “in their most profound hour of need, we will leave people on the beach, alone, helpless,” Murphy said, predicting that such a decision would double already historic unemployment rates, and noting that “this is not just a New Jersey matter.”

Later in his remarks, the governor said that President Donald Trump “is in a better place on this [issue]” than McConnell, “and he’s gonna have to be, because it’s not optional.

“If we are going to continue to serve folks who are unemployed, small businesses that are bust, folks that are dying, we’ve got to be there for them, and the federal government has got to give us the wherewithal to do that,” Murphy concluded.