More than 75 percent of those hospitalized for COVID-19 are unvaccinated, officials say. Plus: booster schedule timelines remain to be confirmed. 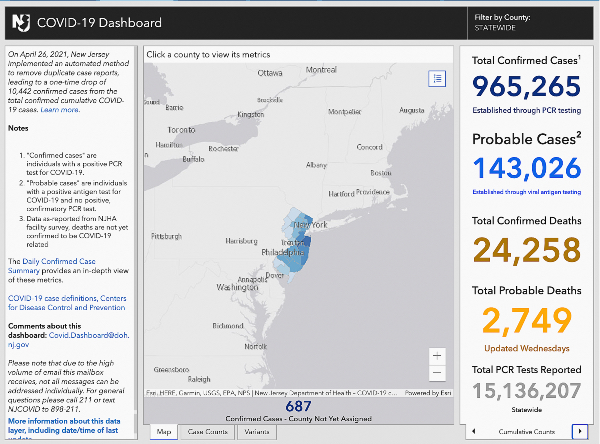 Sadly, 31 more residents have perished from complications related to the virus, bringing the statewide, confirmed death toll to 24,258 lives lost during the pandemic.

In addition to those lab-confirmed fatalities, the state has acknowledged another 2,749 probable COVID-19-related deaths—two more than previously reported.

More than 15.136 million polymerase chain reaction (PCR) tests for COVID-19 have been performed statewide, with a 10.945-percent positivity rate per 100,000 residents.

The statewide average of COVID-19 spot positivity testing based on PCR test results stood at 7.93 percent September 4; in South Jersey, it was highest, at 9.59 percent.

Rt, the variable that describes the seven-day, rolling-average, statewide rate of transmission of new COVID-19 cases, hit 1.04 on September 8.

Any Rt figure greater than 1.0 means that each new COVID-19 patient is infecting more than one other person, on average, and the spread of the virus is increasing.

Among those hospitalized patients, 270 are in intensive or critical care, and 128 of the ICU and critical-care patients (47 percent) are on ventilators.

In New Jersey’s 71 critical care hospitals, 160 patients were hospitalized with COVID-19 yesterday, while 91 others were discharged.

“These numbers are up,” the governor said. “There’s no other way to put it.”

“If the cases stay steady, the Rt will stay steady,” Persichilli said. “We are seeing hospitalizations creep up; we’re about 50 percent lower than where we were in April [2021].”

Persichilli also noted that 75 percent or more of those individuals hospitalized with COVID-19 are unvaccinated.

Across the state, long-term care (LTC) centers have reported 1,667 cumulative outbreaks of COVID-19, and 153 are dealing with an active outbreak. LTCs account for 56,155 infected patients and staff in New Jersey, or 5.8 percent of total cases.

That includes 33,313 residents and 22,671 staffers sickened by the virus, as well as 8,482 lab-confirmed resident and staff deaths (34 percent of the statewide confirmed total), with facilities self-reporting 145 staff deaths.

Of 652 veterans residing in three state-run homes, 456 residents have tested positive for COVID-19, and 156 have died from complications related to the virus. Three hundred veterans have recovered from the virus. No resident is currently COVID-19-positive; three staffers presently are.

The facilities at Menlo Park, Paramus, and Vineland are staffed by 1,366 workers, four of whom is presently COVID-19-positive. The facilities have sustained two staff deaths related to the virus.

At state-run psychiatric facilities, 372 of 1,133 patients and 1,080 staff members have tested positive for COVID-19. Fourteen patients and eight staffers have died from complications related to the virus.

To date, 132 New Jersey children aged 1 to 18 have been diagnosed with pediatric multisystem inflammatory syndrome (MISC)—two more than previously reported—and one child remains hospitalized with the illness. Four of those MISC cases were reported in Camden County, tied with Cumberland and Monmouth Counties for third-least in the state.

Across New Jersey, 11.251 million COVID-19 inoculations have been administered.

Throughout New Jersey, 5.478 million people have been fully vaccinated in-state, having received either a one-shot formulation from Johnson and Johnson or both doses of the two-shot Pfizer or Moderna vaccines.

In Camden County, 596,426 doses have been administered; seventh-most in the state.

An estimated 412,366 vaccine doses have been administered to New Jersey residents outside of the state, of which 177,766 residents are estimated to have been fully vaccinated.

By mid-July, that number had increased to 5.019 people fully vaccinated at New Jersey vaccination sites. By the end of August 2021, the state had exceeded 11 million doses administered and was approaching 6 million fully vaccinated residents. 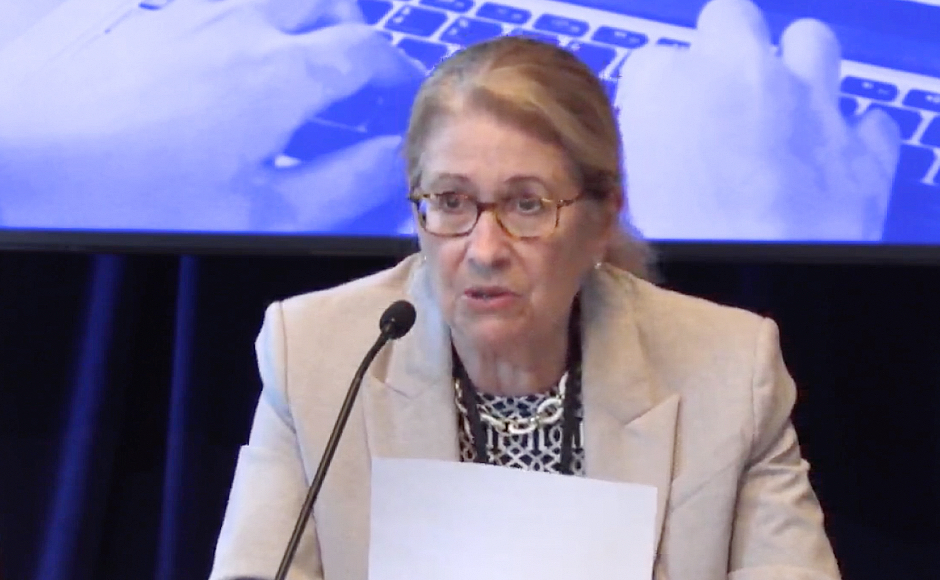 The B.1.617.2 “Delta” variant, initially identified in India in December 2020, remains the the leading variant in the United States as well as in New Jersey, accounting for 98 percent of all variants genetically sequenced in the past four weeks, Persichilli said.

The World Health Organization has named the B.1.621 “Mu” variant, first detected in Colombia in January 2021, as a variant of concern, although the U.S. Centers for Disease Control (CDC) has not done so yet.

The New Jersey Communicable Disease Service is also tracking the Mu variant, as the state has identified 16 reported cases in the past month, Persichilli said.

“The Mu variant accounts for a very small number of cases, but we continue to monitor it,” she said.

Although the CDC has recommended that people receive booster doses of the COVID-19 vaccine to guard against potentially waning immunity to the virus, the specific timetable for such doses has not yet been defined.

Persichilli said NJDOH is building plans to offer booster doses at six- and eight-month intervals, depending upon where the agency lands on its recommendations. The commissioner also cautioned, “There’ll probably be a lag between when Pfizer and Moderna guidances come out.

“People will get their boosters as soon as we get the recommendations,” she said.