Trending
You are at:Home»Government»Coronavirus Update: Statewide Cases Approach 30,000 and 650 Deaths; 40 Percent of Those Hospitalized on Ventilators

Wearing a mask ‘is not a failsafe’ alternative to social distancing, Governor Phil Murphy says, urging people to ‘behave as though you’ve got’ the virus. Meanwhile, small businesses aid is on a slow rollout, amid stalled federal efforts. 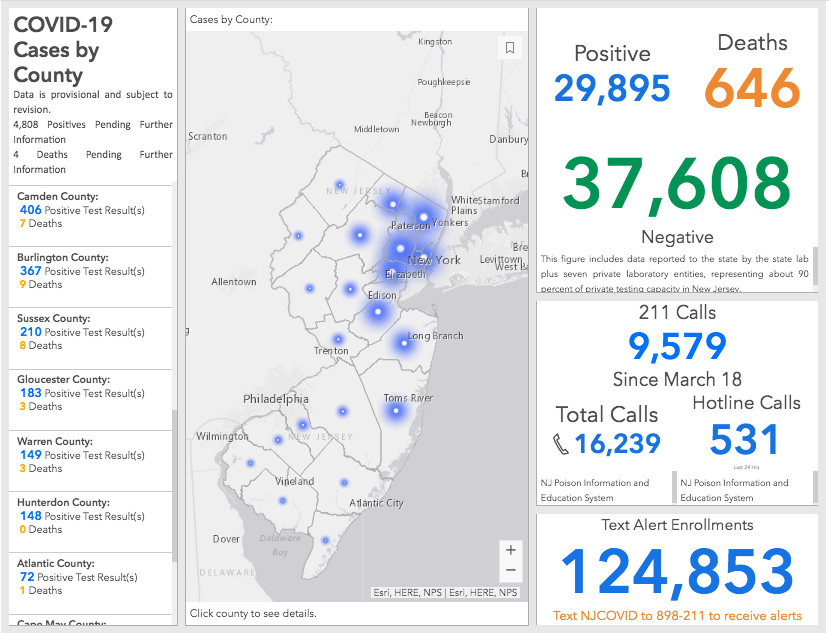 Another 113 residents have succumbed to complications related to the virus, bringing the statewide death toll to 646 in little more than a month.

Two more Camden County residents are among those to have perished, and another 59 more have contracted the virus, officials reported today.

To commemorate those losses, Murphy ordered that all flags across the state fly at half-staff for the remainder of the pandemic, beginning April 3.

At least one of those 113 deaths was of a Camden County resident, said New Jersey Health Commissioner Judy Persichilli. The state is investigating two additional COVID-19-related deaths of people whose counties of origins have not yet been determined. Three of the deaths originated in long-term care facilities, she said.

The commissioner also noted that 3,016 patients in New Jersey hospitals have been confirmed positive, or 12 percent of all hospital patients in the state today. About 40 percent of them, or 1,227 patients, are on ventilators, a figure that Persichilli said was less than the 50-percent rate she expected.

“That tells me that patients are coming probably into the hospital sooner than later, so they’re being supported in different ways that are perhaps helping them more,” Persichilli said. “We are planning for every critical care bed, a ventilator.” 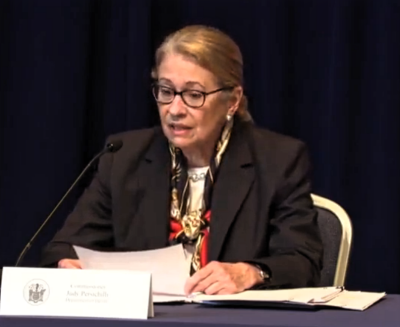 Another 3,016 people—equal to those hospitalized by COVID-19—are under investigation for the virus, awaiting the results of their tests.

Persichilli also referenced a report from the U.S. Centers for Disease Control (CDC) confirming earlier indications that patients with underlying health conditions are at higher risk for contracting the virus.

According to the CDC, those include diabetes mellitus, chronic lung disease, and cardiovascular disease.

Homemade masks ‘not a replacement’ for keeping your distance

As New Jerseyans increasingly don homemade facemasks in public, Murphy reminded them that doing so “is not in any way a replacement for social distancing in terms of flattening the curve.”

He encouraged people to continue staying at home as often as possible, calling social distancing “our best surrogate vaccine.”

“A face covering is more about you lowering your chance of spreading the virus to others,” the governor said. “It is not a failsafe measure to protect you from getting sick.

“Social distancing is both our best offense and our best defense,” Murphy said. “Behave as though you’ve got [the virus]… there is no silver bullet that we can load to make this go away overnight.”

“Keep washing your hands, and if you’re feeling under the weather, please just stay indoors,” he said.

Therapeutic treatments for the virus could be available as early as the fall or winter, but the world is a year to a year-and-a-half away from a COVID-19 vaccine, Murphy said. 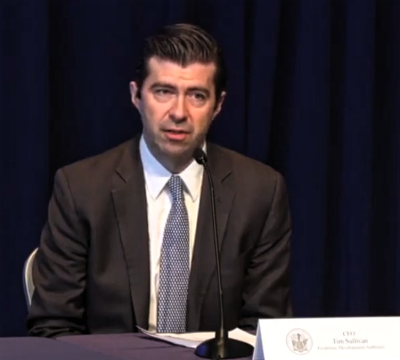 Although state economic resources have been pooled to offer some relief to businesses throughout New Jersey, Tim Sullivan, Chairman of the New Jersey Economic Development Authority (NJEDA), said the programs are being rolled out slowly amid a tremendous volume of applicants.

About $40 million has been allocated to a direct-aid package that Sullivan believes will eventually total $75 to $100 million once federal aid is included.

They will take the form of grants, loans, and lending capital for banks.

“We wanted to stretch the public dollars we could put into this effort,” Sullivan said.

However, NJEDA is already “way over-subscribed” with applications for the $5 million it’s allocated to small business grants, Sullivan said. Available only in $5,000 increments to companies with 10 employees or less, the agency had received more than 16,000 applications by 1:30 Friday afternoon.

“We will hopefully make awards as early as next week, and have electronic transfers of money by the end of next week,” Sullivan said.

For companies with less than $5 million in revenue, NJEDA is offering $10 million in 10-year loans that start at 0-percent interest for the first five years. Applications for those programs will be released April 6, and may be submitted April 13.

That timetable doesn’t square with the dire needs of businesses throughout the state, several of which were already contemplating layoffs as recently as 10 days ago, Sullivan said. In a survey of 2,000 small businesses in New Jersey conducted mid-March, 73 percent of respondents “were already reporting significant loss of income,” and more than half were likely to cut staff, Sullivan said.

“The pain in the small business part of the economy is very real, and from the governor on down, we realize that,” he said. “We’re going to do whatever we can to stabilize as many businesses as possible. “

New Jersey business owners must continue to wait for the “significant federal resources “ that Sullivan said are “on the way,” including the $350-billion paycheck protection program (PPP), forgivable loans that are administered through the U.S. Small Business Administration.

However, early reports across the country show any number of consternation with lenders who are either unprepared to roll out the loans, or are limiting them to prior customers.

The Small Business Administration Paycheck Protection Program is not off to a good start this morning.

Several major banks are not ready to process loans.

And there are lots of reports of Bank of America rejecting applications form longtime customers. #PPPloan pic.twitter.com/6hGdUjZVb1

Yesterday @stevenmnuchin1 stood at the White House podium and assured American small business owners that the Paycheck Protection Program "will be up and running tomorrow."

Here's what small business owners are looking at right now when they try to get PPP loans from banks: pic.twitter.com/8SOKCA8y4Z

Despite being bullish on the value of the NJEDA program, Murphy again stressed the need for direct federal aid to help New Jersey combat the economic impact of the virus.

“We’re as proactive and as innovative as any American state through the EDA, but there’s no amount of money that we have that could come close to making folks whole and allowing them to get back on their feet again,” the governor said. “We’re nowhere without the feds.”

Murphy also took questions on the effectiveness of the mortgage deferral program brokered with New Jersey’s largest lenders. He again stressed that borrowers are not to face balloon payments at the end of the 90-day deferral, but that “we want that to be tacked onto the end of the mortgage, 10, 20, 30 years out.

“We expect landlords getting relief over here from their mortgage lender to provide symmetric relief to the folks who are renting from them,” Murphy said. “No one is allowed to be thrown out of their house for foreclosure, eviction, including for not paying rent.” 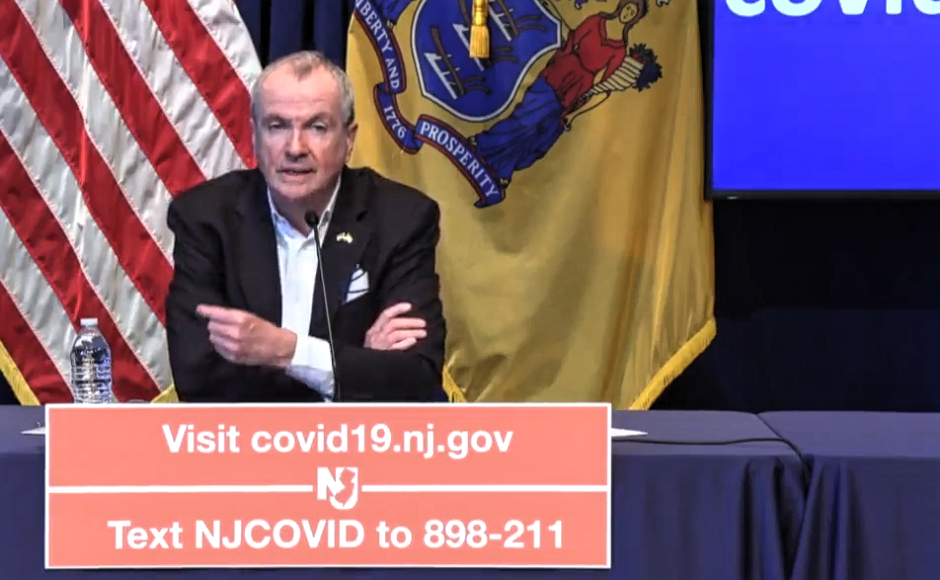 The governor was also asked whether the word “knucklehead,” his preferred sobriquet for those who violate his stay-at-home order, was more appropriately a term for juvenile offenders, and not those who could be charged with aggravated assault for threatening to infect someone with COVID-19.

“I don’t discriminate based on age. We need everybody to get with the program, to comply; to get us to 100-percent compliance.”

Finally, the governor said he would be “stunned” if the state proceeds with its primary elections on June 2, although no decision has yet been made to move them.