Some hospitals have had to divert patients for want of empty beds, says Health Commissioner Judy Persichilli. The state is enlisting volunteers, but still needs 1,650 ventilators and more protective gear. 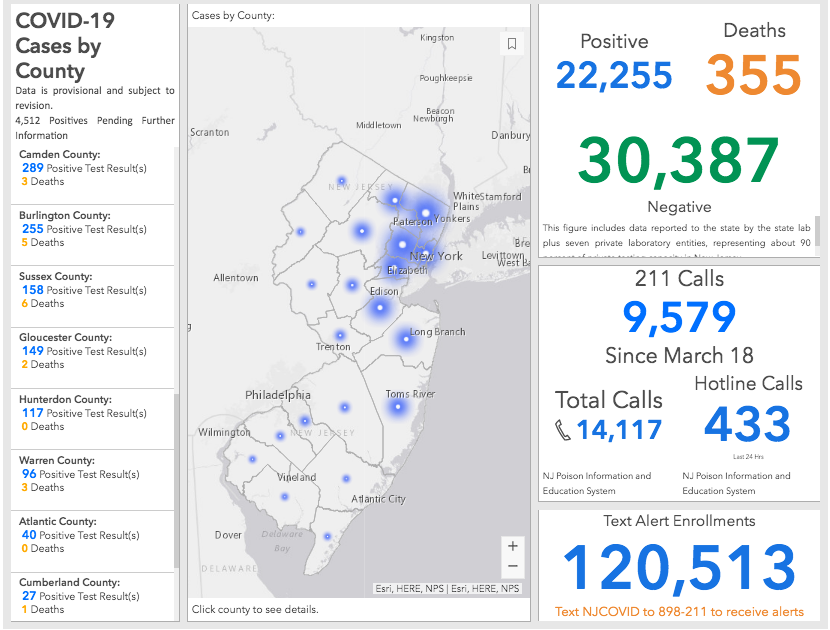 Additionally, 91 more residents have died from complications related to the virus, bringing the statewide toll to 355 people, Murphy said.

(Three additional people could be added to that total, but the state is still investigating whether COVID-19 or some other underlying cause is behind their deaths, Murphy said.)

Investigators are still gathering information on another 1,718 cases in which a diagnosis of COVID-19 has not been confirmed, New Jersey Health Commissioner Judy Persichilli added.

“I would love nothing more than to sit here and say, ‘April Fool’s!’, and then everything would be back the way it was,” Murphy said. “Unfortunately, that is not the case.

“This is the reality that we’re dealing with, and we’re all going to have to adjust to what is most likely a new reality once this emergency passes,” he said.

Meanwhile, North Jersey is already experiencing an uptick in COVID-19 cases that are testing the limits of its critical care capacity.

“Community spread is here in New Jersey, and it is here to stay for a while.”

Seven hospitals reported yesterday that they “were on divert status,” Persichilli said; some due to overcrowding in their emergency rooms, others due to overall high numbers of patients.

One had 80 patients waiting for beds, a lag brought on by time spent deep-cleaning patient rooms. Two facilities needed additional ventilators, which they got. As patients turn over, facilities are evaluating their patient capacities in eight-hour increments, Persichilli said. 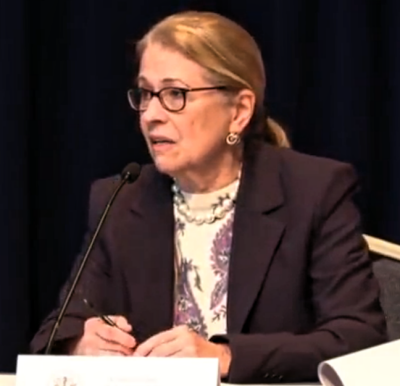 “Community spread is here in New Jersey, and it is here to stay for a while,” she said.

Meanwhile, the state has begun conversations about how soon it could require refrigerated trucks to house the dead, as county morgues fill up and funeral services are postponed.

“The fact that we’re having this conversation, folks, this is real,” Murphy said.

“Wash your hands with soap and water.

“Allow us to have a healthcare system, and frankly a society and an economy that can handle this crisis.”

The governor offered “four emphatic ‘no’s” to the questions of whether the state has enough ventilators, hospital beds, healthcare workers, and personal protective equipment (PPE) for them. Plans are in place to resolve each need, “but we’re not where we need to be,” he said.

As much as 80 percent of patients who contract COVID-19 may only develop mild-to-moderate symptoms that can be resolved at home, Persichilli said. However, 15 percent may require hospitalization, and perhaps as many as half may need respiratory therapy in an intensive-care unit (ICU).

The state is working to double its capacity of critical-care beds, from 2,000 to 4,000, and wants to be able to assign one ventilator per bed, Persichilli said. Some patients may share ventilators; other hospitals are working to modify anesthesia machines to serve as ventilators while more are procured.

“We’re not at that point yet of allocating resources,” Persichilli said, but the state is still trying to acquire 1,650 more ventilators. Another 350 are headed in from the national stockpile, accounting for 850 of the 2,300 New Jersey is projected to need.

“If we can be assured that we’re getting these in regular installments, we’ll be able to stay out ahead of the need,” Murphy said, promising to “continue to press… anyone who will take my call for more ventilators, more PPE, more direct state aid; whatever it is that we will need to get ourselves through this crisis.”

Those forecasted deficits are based on the University of Pennsylvania-developed CHIME model, upon which the state Department of Health is evaluating its needs. If New Jersey took no action to “flatten the curve” of peak cases of COVID-19, the state could need as many as 80,000 hospital beds to handle the caseload, an impossible mark to reach.

But assuming at least 31 percent of the public complies with social distancing directives and that case totals double every six days, the impact of peak cases is shorter and sharper, staving off the depletion of healthcare resources by as much as a month or more.

However, tests that are being returned now originated a week ago or earlier, before the state was broadly shut down. Officials must wait to see how that assumed 31-percent social distancing rate compares with observed behavior in New Jersey.

“Without mass testing, it would be difficult to predict total cases,” Persichilli said. “Right now, we just want to make sure that we have the resources to take care of people that need care.

“If we did nothing we’d feel [the surge]exactly today,” she said. “In the northern part of the state, we’re beginning to feel the real stress and strain on the critical care complement.” 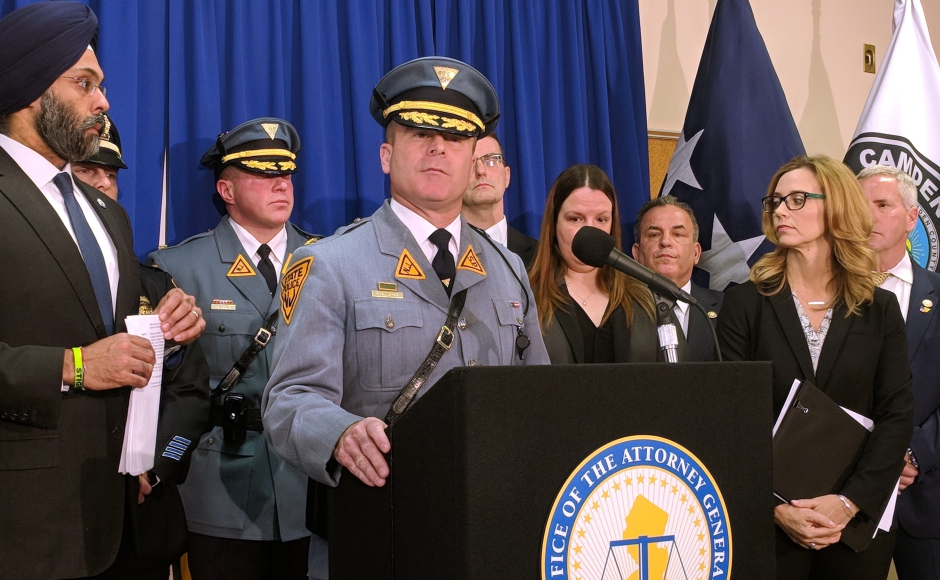 Living up to his own advice, the colonel is postponing his daughter’s wedding amid the pandemic.

“I know it’s personal, but it’s beyond personal,” Callahan said.

“We’re doing all that we can, even down to the Callahan family.”

“We still welcome anyone with prior medical experience to help us here in New Jersey,” he said. “Fifty-two-hundred people have already stepped forward to volunteer. We need you.”

Healthcare professionals, be they retired, foreign, holding out-of-state licenses, or even in their final semester of training, are invited to sign up.

“We need you, and we need you in a big way,” the governor said. “Whether you’re in New Jersey or not is irrelevant. You sign up, we’re going to find a way to put you to work.” 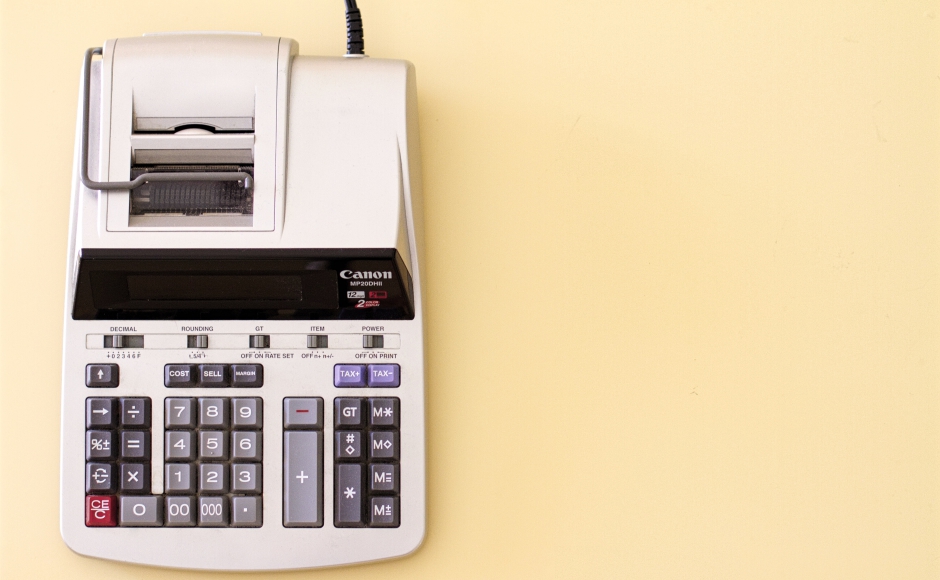 ‘We want to give folks some breathing room’

Murphy also commented on the “unprecedented” steps of moving the state fiscal year deadline from June 30 to Sept. 30 and the filing deadline for state taxes to July 15.

“We want to give folks some breathing room,” the governor said.

“Guess what? April 15 is in one fiscal year, July 15 is in another. We won’t know until the end of July when the numbers are coming out. Extending the fiscal year to September 30 made sense at so many different levels.”

He also urged residents to participate in the 2020 U.S. Census. The once-in-a-decade count helps ensure that state residents have future access to federal aid. April 1 is Census Day, but the deadline for survey participation stretches through the summer.

“We know New Jersey was undercounted in 2010 and because of that, we have left untold billions of dollars in federal aid on the table,” Murphy said. “If that money isn’t coming to New Jersey it’s going to some other state. Take a moment and go online and make sure you are counted in the census.”

Finally, the governor offered guidance on the mortgage relief deal brokered with major lenders in the state, saying it was brokered with “clear expectations that landlords will pass that on to their tenants.”

“People need to pay their rent, but we’re also asking landlords, if they’re getting a 90-day holiday, we’re imploring, if not mandating, that they pass that holiday on to whomever’s renting from them,” Murphy said.

The governor said his office is “still working on solutions for renters” who may be out of work during the pandemic.