Trending
You are at:Home»Business»DiBartolo ‘Cake Guys’ Take Their Shot on TLC’s Next Great Baker

Al DiBartolo, Jr. and Manny Agigian are hoping to take home a $100,000 prize and a shot at working with ‘Cake Boss’ Buddy Valastro in the fourth season of the TLC reality competition.

A little over a year ago, DiBartolo Bakery literally stopped traffic along Haddon Avenue when its 40-year-old exterior got a nationally televised facelift on Kerry Vincent’s Save My Bakery.

On Tuesday, two familiar faces from the Collingswood sweet shop will be angling for their breakout move on the fourth season premiere of TLC’s Next Great Baker.

The pair have had some seasoning in the production world, but there’s a lot more on the line this time. The grand prize is $100,000 and a job at Cake Boss star Buddy Valastro’s new shop at The Venetian in Las Vegas, NV. 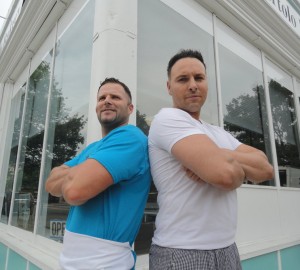 Manny Agigian (left) and Al DiBartolo, Jr., of DiBartolo Bakery in Collingswood will compete in the fourth season of TLC’s ‘Next Great Baker.’ Credit: Matt Skoufalos.

‘Not afraid of anything’

Agigian said he believes the program will showcase his friendship with DiBartolo, Jr. as much as the talents he’s honed in 20 years of high-end bakery work.

He described the pair as “hard-working [and]not afraid of anything”; known for their Jersey hustle and go-lucky attitude.

“We don’t succumb to pressure. We’re just so quick. When you watch somebody who’s a professional, whatever they are, you can tell.”

DiBartolo, Jr. said that although he and Agigian have an abundance of confidence to match their chemistry, both are fathers’ whose aims are to “try to be helpful and gentlemanly” in the process.

“We try to help everybody,” he said, “even our competitors. You can have it all.”

That eat-your-cake-and-bake-it-too attitude isn’t just a put-on for the show, Agigian said; it’s a lifestyle philosophy.

“If you say ‘I can’t do anything because I’ve got work tomorrow,’ you’ll never do anything,” he said. “I coach five baseball teams. Al teaches CCD. You can still be a baker and go to the gym and still make good use of your time.”

“There’s nothing wrong with being a strong male role model,” DiBartolo, Jr. said. “You can still show compassion. You’ve got to go for things. You’re going to get judged no matter what.

“Our kids know who we are, and the results are paying off,” he said. 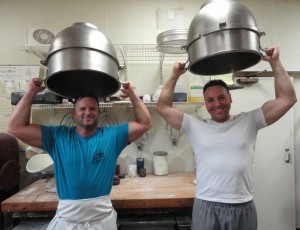 Even when clowning around, Agigian (left) and DiBartolo, Jr. say they never shirk their responsibilities at home or in the shop. Credit: Matt Skoufalos.

Keeping family in the picture is such a priority for Agigian and DiBartolo, Jr. that the two are donating proceeds from their (kid-friendly) premiere viewing party at PJ Welihan’s Cherry Hill location to the Ronald McDonald House.

The bakery will also be getting an extra boost from another neighborhood business as well.

Chef Mark Smith of The Tortilla Press Cantina will host Tuesday night viewing parties for the entire fourth season of Next Great Baker at his Pennsauken location.

Smith said the Cantina will raffle off a new television every week, with the proceeds after costs going to Crossroads, a Willingboro, NJ-based nonprofit that helps abused, abandoned, and homeless children and teens throughout the state.

DiBartolo’s will also supply the Cantina with a special dessert weekly, with Tortilla Press donating a dollar to Crossroads for each sold.

Smith said that beyond the chance to team up for charity, it was a natural fit because “DiBartolo’s started off in Pennsauken and then they moved to Collingswood, and we’re in Collingswood and Pennsauken.”

“I see the creative things that Al and Manny put together,” Smith said. “I think their chances are good.

“I know these guys are creative and what they make tastes really good and looks really good, so if those are the criteria, they have a really have a chance,” he said. 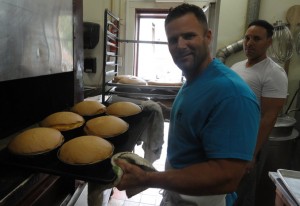 Agigian (left) and DiBartolo, Jr. at work in the kitchen at DiBartolo Bakery in Collingswood. Credit: Matt Skoufalos.

Even if the two don’t make it, DiBartolo, Jr. said the experience was rewarding on many levels. An off-camera meeting with Valastro revealed the “Cake Boss” to be encouraging and relatable, he said, especially due to their shared cultural heritage.

“Look at his place, the burgundy and gold [awning],” DiBartolo, Jr. said. “That’s what we had here forever. That’s a riot. It’s a very comfortable feeling to me.

“With the Italian family breathing down your neck, they don’t care what you accomplish, they’re still gonna blast you,” he said. “I could tell them I met anyone. They’ll say, ‘Guess what? That trash can’s full. Go get it.’

Next Great Baker premieres Tuesday, June 24, at 9 p.m. on TLC. Catch the season launch party at P.J. Welihan’s in Cherry Hill and weekly airings at The Tortilla Press Cantina in Pennsauken.