Trending
You are at:Home»Opinion»EDITORIAL: We Still Have to Talk After the Election

The conversations ahead are complex. To prepare for them, we must resolve to be usefully conflicted. 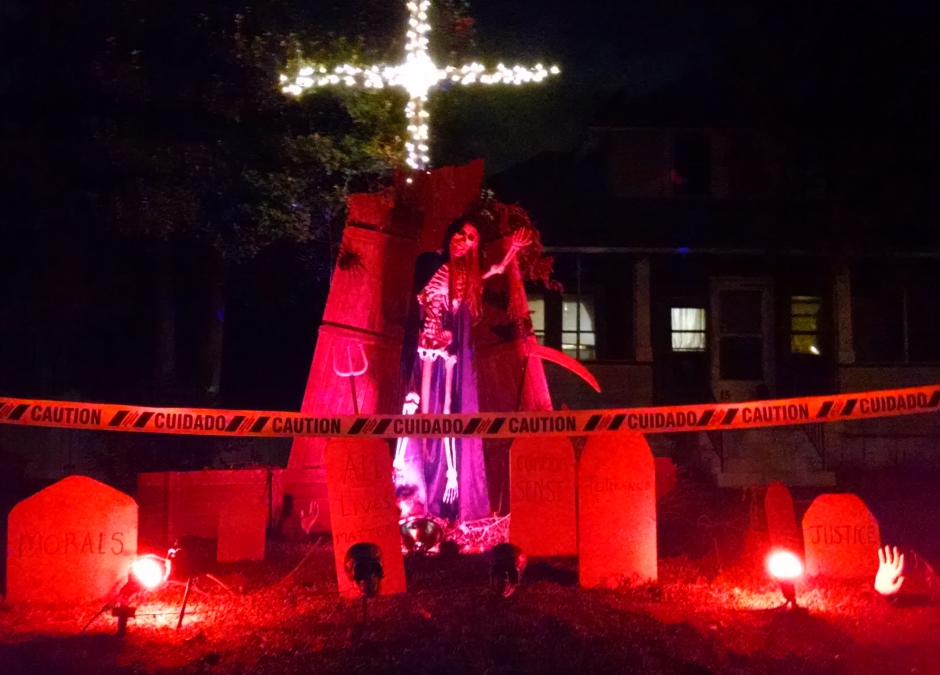 An evangelical Christian, his obligation to his faith is to proclaim it boldly.

To that end, he erected an illuminated crucifix the size of a utility pole on his front lawn, which faces a well-traveled county road.

But as much as Tom loves Jesus, Tom also really likes decorating for Halloween, and he was struggling to reconcile his spooky and spiritual impulses without blaspheming.

In front of his crucifix, Tom hung a shrouded skeleton emerging from a coffin on which he wrote, “HELL IS REAL.” Floodlit tombstones reading “ALL LIVES MATTER,” “TOLERANCE,” and “COMMON SENSE” offered further social critique.

Tom really wants to connect on these ideas. When I pulled over to take in his display, he invited me up to his porch to chat. Many of Tom’s opinions reach a moral endpoint that he said has strained relationships with friends and relatives. Instead, social media has become the place where Tom confronts what he believes are the ethical implications of his ideas—out loud, and in public.

At the root of it all, though, Tom still wants for things to be okay. He said he really wants everybody he’s arguing with on Facebook to come over for dinner and crack a few beers. But that doesn’t quite come across online, where, even for a guy who built a giant, light-up cross outside his house, Tom’s somehow more intensely declarative of his beliefs.

He’s certainly not alone in the exercise. In the last 18 months, everyone I know has been drawing hard lines among people they’ve known for a while, even if only socially, and has begun picking them apart, antagonizing them, condemning them; distorting their ideas or their views or their personalities, as if the only way to exist in relation to one another is in a constant struggle for dominance.

What else could we expect of an election season in which the two leading candidates—people who were ostensibly and publicly friends, or whom had at least mutually benefited from a friendly relationship for years—are suddenly at moral extremes?

In the digital realm, every opinion has become an extension of the self, not of emotions or deductions or hunches. Every disagreement therefore becomes an assault on the self, and not an exploration of viewpoints. We are on teams, in camps; with or against whole people whose miraculous complexity and inconsistency and confusion we now distill into flat states of being, the easier to be simply allied or opposed. People have suddenly become unforgivable, unlovable, or unreachable when what they most need to be is understood.

I left my conversation with Tom sure of only two things. First, like just about everyone I know, he is possessed of a number of perspectives that he acknowledges don’t always dovetail. Second, neither one of us is looking to move out of the area on November 9.

Tom and I (and most of us) probably all want the same things, fundamentally. We want to feel safe and welcome in our neighborhoods. We want to participate in our communities, and we want the opportunity to earn enough of a living to be able to live where we do. We want to enjoy good times with friends and family.

What we seem to have a harder time recognizing is that these shared goals don’t exist when others’ access to them is trampled. If our behavior obligates us to dismiss people who don’t follow our prescribed path to community—particularly, people we know well personally, or to whom we are related—then it’s not a true path to community at all.

In fact, any relationship that’s based on denying people respect or rights or basic needs is not a healthy one. But our current cultural paradigm of opinion, reaction, and counter-reaction often just seeks a bottom-line excuse to be wholly dismissive of entire human beings. When everything is framed as an either/or choice, there are many single issues that can offer enough cause to sever a relationship.

Maybe leading people to moments of crisis over personal or social issues that are false dilemmas dressed up as moral obligations is dangerous. Maybe when you force someone to justify irrational behavior according to standards they don’t understand or respect, you won’t get what you consider to be a rational answer in response. Maybe our personalities are more “if/and” than “if/then.”

Can we find ways to identify the feelings behind the intensity of these arguments? Can we provide a safe place for emotional hunches to be discussed without fear of public shaming or shunning? Complicated and very necessary national conversations about economic inequality, gender, race, sexuality, and our collective environmental fate cannot be held in a world reduced to dichotomies.

We need to grow and learn from a variety of perspectives, but hearing everyone’s opinion on everything all the time is making us more than a little anxious. It’s okay to not talk about some stuff publicly, or to not insist upon a social audience for our internal monologues. Pushed even further, we might be able to admit that we all contain Whitman’s “multitudes.” We can manage a variety of perspectives that aren’t necessarily in harmony but which don’t negate us altogether for their inconsistency.

Being willing to find ways to work with people you don’t understand doesn’t mean accepting less than you deserve ethically or morally. There are plenty of people with whom you can disagree and yet still have normal, healthy, and safe relationships. There’s lots of political views that aren’t reducible to life-and-death stakes. So if you’re cutting off friendships, offline or online, are you doing it because you don’t like what the person’s perspective says about them, or about you?

Ultimately, there’s no one else responsible for reconciling the things that make you uncomfortable. Some of that discomfort might not even be reconcilable, and grappling with our own internal inconsistencies might just be the deeper part of humanity.