Trending
You are at:Home»Business»Erlton Social: Cherry Hill Craft Bar ‘a Tribute to the Neighborhood’

The newest bar-restaurant at The Big Event family entertainment center on Kings Highway takes its inspiration from its roots as a neighborhood lounge. 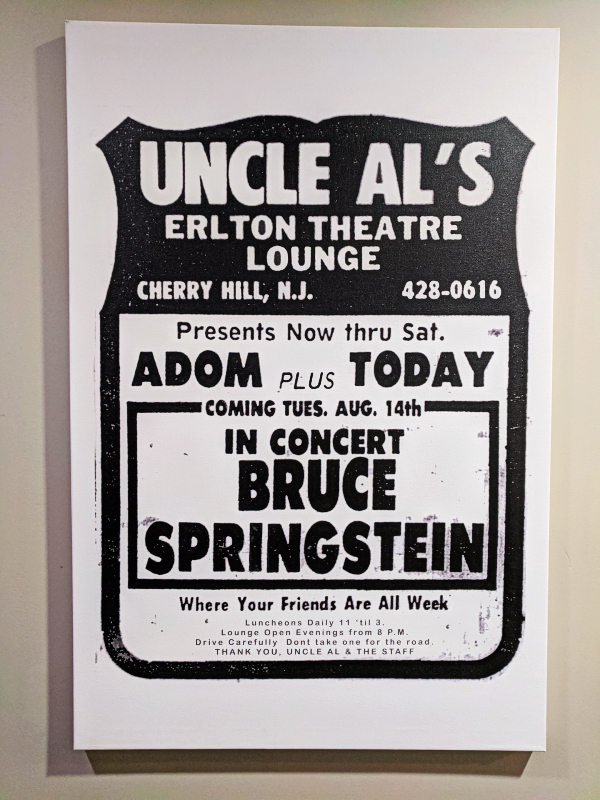 In tribute to its bygone days, Erlton Social features wall art made from a newspaper ad placed by an older version of the venue. Credit: Matt Skoufalos.

When Julius “Ju-Ju” Kinkle of North Camden opened “Uncle Al’s Erlton Theater and Lounge” on King’s Highway in Cherry Hill, his tagline was, “a place your friends are all week,” Randy Alexander wrote for South Jersey Magazine in 2012.

That venue, which once famously hosted a rising Bruce Springsteen in the early 1970s (despite misspelling his name on an advertisement for the event), has undergone significant changes since those days, but is still locally owned and operated.

Perhaps more importantly, in its current incarnation, it’s still trying to be that place where you can meet your friends all week long.

After years as Playdrome of Cherry Hill, the facility underwent major renovations in 2015, rebranding as “The Big Event,” a combination 36-lane bowling alley and arcade space dubbed “Game Mania.”

And last weekend, the facility opened the doors to its most recent update, Erlton Social, which overhauled the former Bobby Clarke’s Gym into a craft beer kitchen and 150-seat restaurant with private event rooms.

Although it’s new to the neighborhood, the space took a long time to materialize, said Maggie Parker-Goins, Event Sales and Marketing Director for The Big Event. Of her 27 years with the venue, 14 of them have been spent contemplating a variety of ways to realize the fullness of the potential of the building. 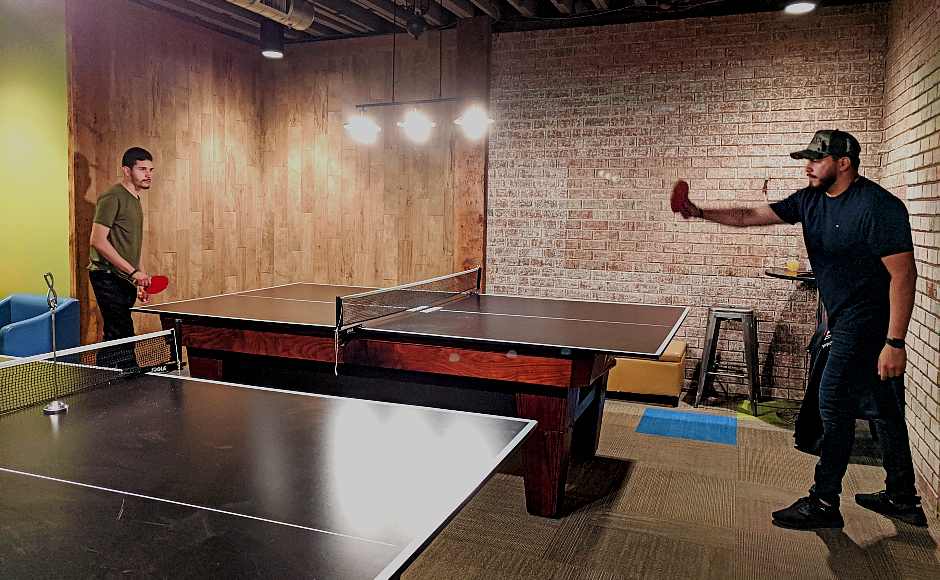 “We started to toss around ideas,” she said.

In making the final decision, however, “we listened to chatter on social media, and tried to hone in on the needs and wants of the community,” Parker-Goins said.

The facility was three weeks from opening its doors in 2020, when the novel coronavirus (COVID-19) pandemic hit New Jersey. Of all the staff they’d begun hiring, only one is still with the business: Executive Chef Terrance Clark of Philadelphia, who developed its “American-inspired” menu, Parker-Goins said.

“We try to find an eclectic appeal in craft-inspired foods,” she said.

“We’re trying to bring an alternating menu that inspires guests to come back often.” 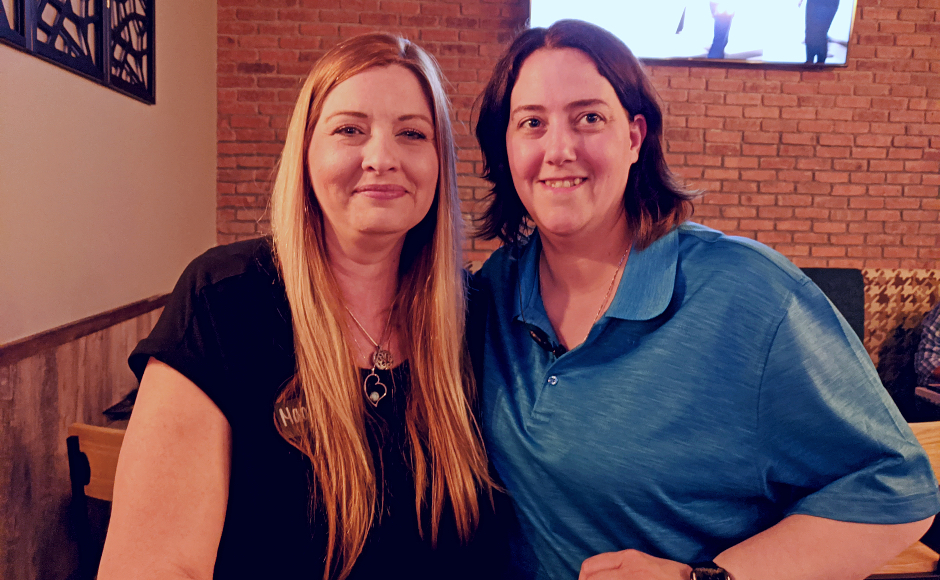 Maggie Parker-Goins (left) and Kelly Wilkes have each worked at The Big Event for more than 25 years. Credit: Matt Skoufalos.

Clark built his menu around higher-end pub fare, like burgers, flatbreads, tapas, sandwiches, and seasonal salads, all with gluten-free, vegetarian, and vegan options, from entrees to kids meals.

The 24-beer draft list at Erlton Social includes beverages from local craft breweries across South and Central Jersey, plus another 40 varieties in bottles and cans, all sold in pints, flights, or growlers.

Everything on the menu is available to-go as well as for delivery via DoorDash.

For those who dine in, however, the eclectic feel of the Erlton Social dining area offers a variety of atmospheric environments ranging from mid-century-modern lounge to what Parker-Goins describes as a “contemporary, warehouse feel.”

Design elements like exposed brick, subway tile, and stamped tin walls create an industrial look in the dining room, while the hardwood floors and salvaged-wood barn doors of a private party room have been preserved from its days as a former squash court designed by trainer Jim Corea of Cherry Hill. 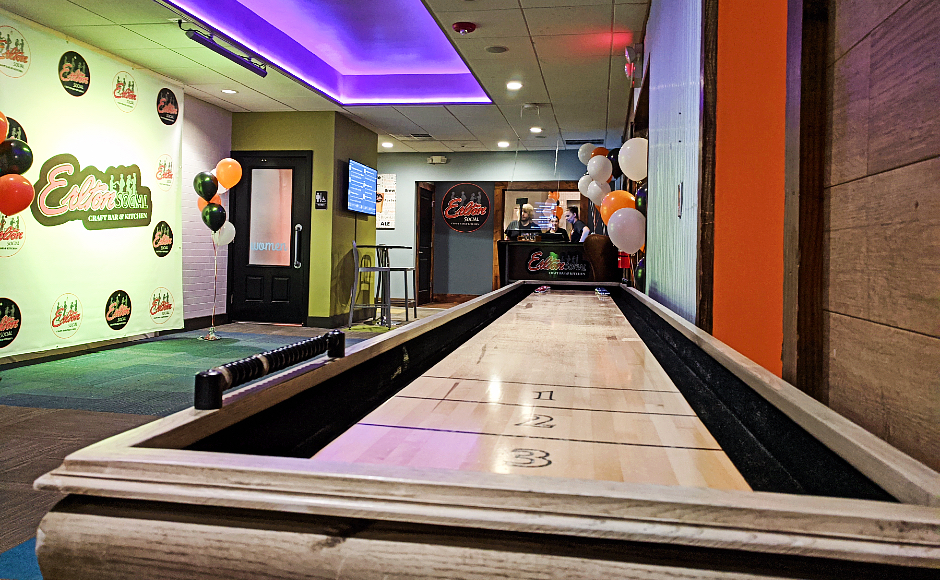 With dining and bar service available throughout the shuffleboard, ping pong, and billiard rooms at Erlton Social, guests can still play while they eat.

A dedicated side entrance to the facility also offers a quick route to the bar and restaurant for those who don’t want to cut through the arcade or bowling alley.

“People from the neighborhood are happy to have someplace to walk to, and we want it to be the destination for everybody,” Parker-Goins said.

She called Erlton Social “a tribute to the neighborhood,” adding—in the spirit of “Uncle Al” Kinkle—that “we can’t wait to make more memories with our friends and neighbors in the area.”