Eyewitnesses reported sparks in the roadway and a heavy police presence as multiple lanes were shut down Tuesday night.

As emergency crews were redirecting traffic and working to repair a downed electrical wire, other members of the department were pursuing suspects involved in an alleged theft from the nearby Home Depot.

“I think there was a lot of police activity and people were confusing the issues,” Cherry Hill Police Lt. Amy Winters told NJ Pen on Wednesday.

She also confirmed that the downed wire and subsequent electrical fire were not the result of a vehicle accident or anything believed to be suspicious.

Winters said the cleanup had been completed by 5 a.m. Wednesday.

Traffic on both sides of Route 70 in Cherry Hill was diverted to a single lane and eventually detoured Tuesday night due to a reported electrical fire near the intersection of Cuthbert Boulevard.

Details were scant: PSE&G spokesperson Desiree McDonald reported that 2,700 customers lost power as a result of a failed connector, but that their service had been restored by 11 p.m.

No official word as to the cause of the incident was available from authorities. There was a heavy police and fire presence on the scene, and eyewitnesses reported seeing burning wires in the street. 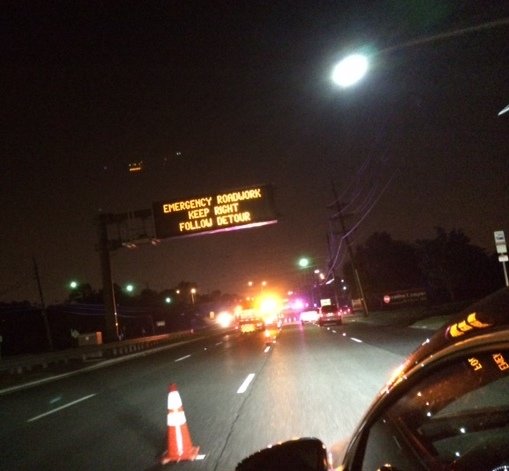 Traffic on Route 70 westbound was being diverted as late as 11:30 p.m. on Tuesday night due to an electrical incident on the highway. Credit: Jennifer Hynes.

Outside the Crowne Plaza hotel, guests were seated in the carport area while first responders from the Cherry Hill Fire Department investigated the loss of power within.

Otis Appling of Vauxhall, NJ, said that the fire alarm sounded around 8 p.m., and guests were ordered to evacuate the building.

Once outside, Appling said he saw downed power lines sparking in the road.

“They were burning like crazy, popping, one on each side,” Appling said.

“One on the east side was burning, and then the one on the west side was down, burning like crazy.”

Businesses farther along the eastbound side of the highway also felt the impact of the outage. 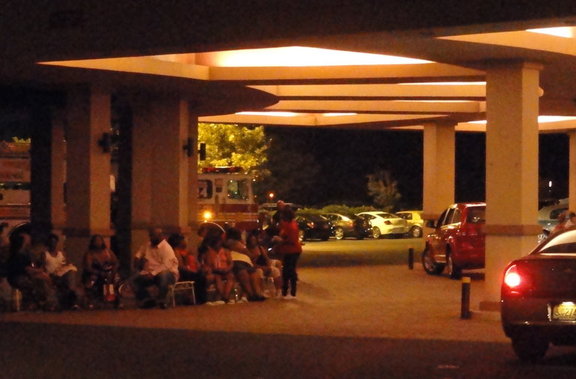 Guests at the Crowne Point Plaza hotel were told to evacuate the building during a power failure related to the incident. A few reported seeing fire in the street from their vantage point. Credit: Matt Skoufalos.

At the Cherry Hill Holiday Inn, Red Hot and Blue manager Rick Poulos said his restaurant was forced to go cash-only after the mainframe went down.

“The battery backup gave me about 15 minutes…and it was done,” Poulos said.

“Credit cards don’t work, the ATM’s not working because it needs both power and Internet. The cash was locked in the cash drawer, so I couldn’t give people change.”

Poulos said his customers shared the same stories—burning wires, a blown transformer—but that none reported any vehicle accident as related to the cause.

“I’ve heard of no accident,” he said. “Just a burning wire, and then I’ve had a few people who said it was an actual transformer that blew up.

“We saw ambulances, cops, the bucket trucks, throughout the hour.”

Traffic is reduced to one lane in both directions in the area of Rt. 70 and Cuthbert Blvd. as the State D.O.T. road crew is on location making repairs. The work should be completed in the next 6-8 hours. Please seek alternate routes as delays are expected for the start of the a.m. commute. Thank you for your patience.

Stay with NJ Pen for further details as they emerge. 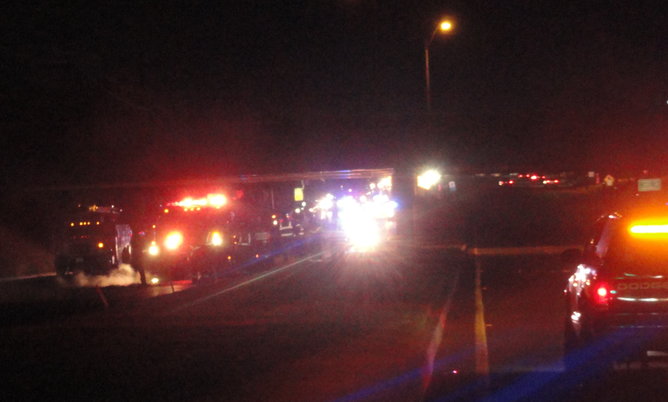 Road crews work to clear an incident on Route 70 in Cherry Hill on Tuesday night. To the left, smoke or steam can be seen rising from the pavement. Credit: Matt Skoufalos.