The Steve Carell drama sheds little light on the wealthy, eccentric Delaware millionaire or his motivations for the murder of Olympic gold medalist Dave Schultz. 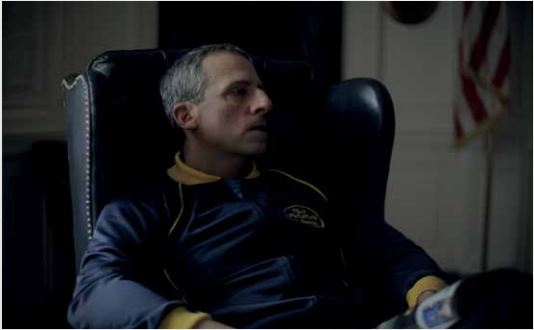 Since its showing at the Cannes Film Festival, Foxcatcher (2014) has been acclaimed for its directing, cinematography, and acting; the buzz has been especially loud about Steve Carell’s depiction of millionaire John E. du Pont.

My particular interest in the story stems from having read much about the murder of Olympic Wrestler Dave Schultz by du Pont in January 1996.

Subsequently, I fell into the trap of expecting that events I knew about would be depicted as such on the movie screen.

Good filmmaking can be terribly convincing. If you know the facts, their filmed account can rub roughly on your psyche. A week after seeing the film, I returned to my original source, No Holds Barred: The Strange Life of John E. du Pont (1996) by Carol A. Turkington, and compared the accounts.

What continued to bother me was the film’s determination to reveal little about John du Pont; more, what little it did reveal was bland and unimaginative.

First, Foxcatcher (the name of DuPont’s estate) shows du Pont throwing his money around to get both his way and a return on his investment. He builds a multimillion-dollar wrestling complex on his estate and then tries to recruit the best talent, including the Schultz brothers, gold-medal winners at the 1984 Summer Olympics.

Mark Schultz initially comes into the fold; Dave stays away because he doesn’t want to move his wife and kids. Eventually, after Mark has a falling out with DuPont, Dave is induced to come to Foxcatcher, living in a house on the estate.

After Mark’s departure, Dave and du Pont have a tenuous relationship. du Pont becomes increasingly jealous of Dave’s popularity and apparently strong family ties. With little setup, du Pont drives to Dave’s house one day and shoots Dave while he is working on his car. du Pont says little during the shooting and drives back to his mansion where he is captured by the police with little resistance.

End of film. We’re given updates on Dave’s wife, Mark, and du Pont, the latter dying in 2009 in a prison for the mentally ill.

I’m not worried about saving the world from a distorted view of this freakish episode. It bothered me that the already-long film did not offer more of a look at John E. du Pont’s history and character, although 20 more minutes to show how “kooked” duPont really is might have been too much.

For one thing, he’s already been established as “kooked”: his fantasy about being a wrestling coach and important cog in the quest for Olympic Gold is manifest enough. du Pont indeed had great influence over the entire amateur sport, and thus everyone in authority overlooked his eccentricities, some of which were egregious.

In effect, du Pont’s money extended his reach and made his family and colleagues codependent on his precarious mental state. Money he gave to amateur wrestlers from Villanova and elsewhere violated rules that no one in charge would enforce at the risk of alienating their major source of funding.

We also see how the wrestlers respond to him: grateful he’s backing them with big donations, and slightly embarrassed over his antics (like buying a tank and shooting a gun toward the ceiling of his complex).

Foxcatcher tries to tie his problems to his mother, Jean (Vanessa Redgrave), an equestrian who sees wrestling as beneath the family. du Pont tries to displace the more than 30,000 equestrian rewards in her glass cases with Olympic and World championship medals; in one scene, Jean is wheeled into the complex, and expresses disdain for her son’s efforts. Then she dies.

Her death both in reality and in the film is very consequential: John’s mental state declines thereafter, and the film ties her death to his increasing isolation, which, in course, leads to his shooting of Dave Schultz.

No Holds Barred, however, traces DuPont’s instability back far earlier; to the 1960s and 1970s. There were reports of drunkenness and drug-taking. He tried to give money to Haverford College on the condition that Haverford should fire an English teacher who had flunked him in high school and hire another teacher he liked to head the Department. (Haverford rejected his demands, and he withdrew his money.)

Many of du Pont’s acclaims are also somewhat muddled. He was an expert ornithologist whose books were largely ghostwritten; he went to the Olympics with the U.S. pentathlon team, but as a trainer, not a participant. He sponsored the U.S. Olympic Swimming program, but ended the program entirely when Jimmy Carter withdrew the United States from the 1980 Summer Olympic Games.

Several reviews have noted Foxcatcher’s dramatic jump from 1989 to 1996. With nothing to inform the audience, the effect is dumbfounding. The 1992 Barcelona Olympic are skipped, as well as the four years Dave Schultz spent at Foxcatcher.

I didn’t expect an explanation for du Pont’s actions. Increasing paranoia, probably; his defense team asserted that du Pont was a paranoid schizophrenic who increasingly viewed Schultz as part of a larger threat against him. Behavioral quirks, such as calling himself the Dalai Lama and wanting people to address him as “Your Highness,” inflated to embrace an increasing aversion to the color black, which caused du Pont to subsequently dismiss three African-American wrestlers.

But these are not even mentioned in the film. Nor is the three-day siege of du Pont’s mansion after the murder. And virtually nothing is mentioned about the trial. At the time, he was the richest man ever to be indicted for murder. If you want an indictment against the super-wealthy, the chronicle of his trial provides ample material.

On the one hand, you can be outraged at how, for 30 years, John du Pont used his money to have his way until he could no longer have his way. Then there’s the man who is mentally ill, protected by his family (as any family would). From his youth, du Pont was isolated emotionally from his parents, and had few friends. In a sense, as long as he didn’t “hurt” anyone, all proceeded as if nothing was wrong.

Note: other books on the Dave Schultz murder include:

Robert Castle is a Collingswood-based writer. Check out his latest book, Pope Sixtus the Fourth, at Amazon; six of his other works are available on Kindle.