No injuries were reported in the incident, which heavily damaged a Taylor Avenue residence.

A one-alarm fire caused heavy damage to an Audubon row home Sunday night but left no injuries in its wake, as emergency personnel responded quickly to the scene.

Along Taylor Avenue, neighbors stood on their lawns with their children, watching as firefighters from six local companies—Audubon, Brooklawn, Haddon Heights, Mt. Ephraim, Oaklyn, and Westmont—went to work. The tiny street was crammed with emergency vehicles and blocked off to traffic at either end.

Resident Elizabeth Zuccarelli said she called 9-1-1 at 10:15 p.m. when she noticed smoke pouring out of her neighbor’s home. 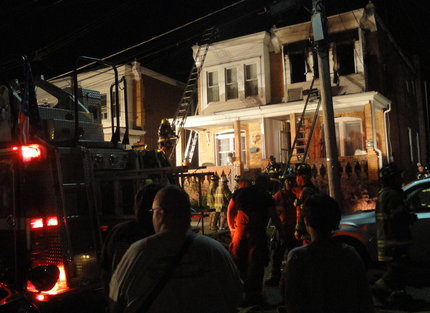 Fire crews and neighbors watch as emergency officials clean up after a Sunday night fire on Taylor Avenue in Audubon. Credit: Matt Skoufalos.

Audubon Fire Chief Anthony Lepone said that the first crews to arrive confirmed heavy smoke from the second floor of the building, and escalated the incident to an all-hands call.

“The house was secure, so we forced entry,” Lepone said. “There was nobody inside.”

Rescue crews evacuated an elderly couple from the home next door, which Lepone said had suffered smoke damage. No one was harmed in the incident, he said. 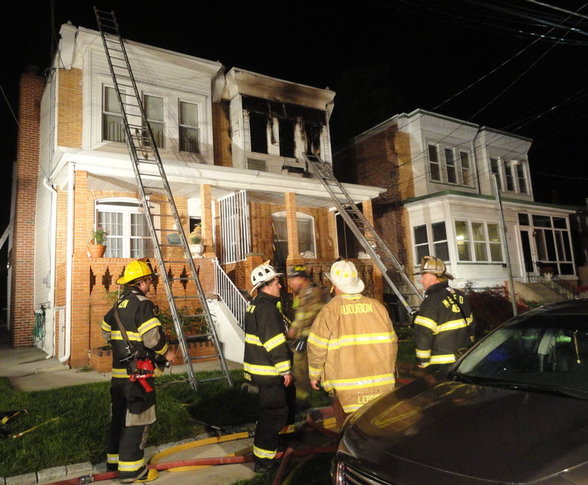