The million-dollar public art project opened to the public on Earth Day 2021, pandemic-delayed, and still in progress. Will the community take organizers up on its offer to reshape their perspectives on the city? 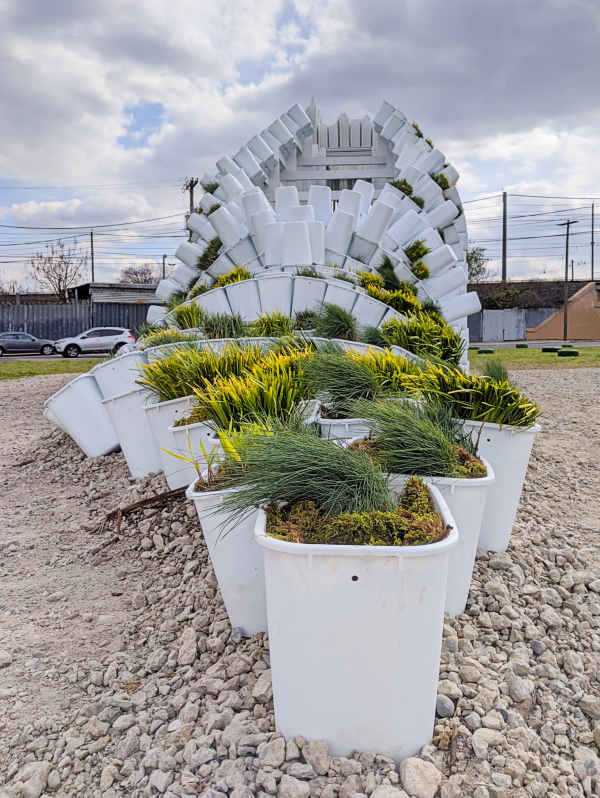 In an average year, Camden City can spend as much as $4 million cleaning up sites that have become illegal dumping grounds for all manner of waste.

Throughout the course of the past three years, it’s spent a quarter of that amount beautifying six such sites into temporary art installations.

In 2018, the city threw its hat in the ring for a chance to win one of five challenge grants from Bloomberg Philanthropies.

Its proposal, a project entitled, “A New View Camden: Changing Perceptions by Transforming Illegal Dumping Lots into Arts Spaces,” invited eight groups of artists to create temporary works of art that would help change the blighted landscape of its neighborhoods.

After cutbacks in funding and a rollout protracted by the novel coronavirus (COVID-19) pandemic, the project finally went live yesterday.

Kimberly Camp of Collingswood, who curated “A New View Camden” (and narrated its accompanying audio tour) said she believes the finished project “hit every target” at which it aimed. She’s hoping it will foster a longer-lasting and more sustainable relationship with arts in the city.

“The idea was to change the perception of the city,” Camp said. “Each one of the artists and the work they were doing all came from a different perspective.

“I would love to see the city use this as a springboard to start a real arts commission and start an arts district,” she said. “That’s a more permanent challenge.”

Woodworker and metalworker Tom Marchetty of Haddon Township said the project renewed his familial connection with Camden. Marchetty, who grew up working in his father’s Federal Street machine shop, took inspiration for his contribution to the project—a series of benches, swings, and sheltered picnic tables—from the community itself. “I would drive around the city, looking at old buildings and old factories; looking at the sites,” he said.

Marchetty revived that history by repurposing materials from throughout the city.

He crafted brutalist swingsets from such industrial artifacts as a marine scale, bought at auction from the Camden Shipyard and Maritime Museum, and a barrel from Concord Chemical Company.

“It was definitely a learning curve for me,” Marchetty said. “I grew up in a machine shop; I’ve never been a part of the art world. From sourcing the pieces, to building them, to bringing my drawings to life, I was selling something that I’d never built before.”

Marchetty singled out the Camden City Public Works Department for special praise in helping clean up the illegal dumping sites and secure access to them for the public (“They did all the heavy lifting”), and said he hopes their efforts will be long-lasting.

“There’s a lot of empty lots in the city that just look bare; every piece and every project that was there made that area feel good,” he said.

“My hope for this project is that it’s a catalyst for more projects in the city,” Marchetty said. “Imagine you have this vibrant site for six months; then on November 1, it’s dead, and on November 3, people are dumping trash again.

‘We’re hoping the community will see it as theirs’ 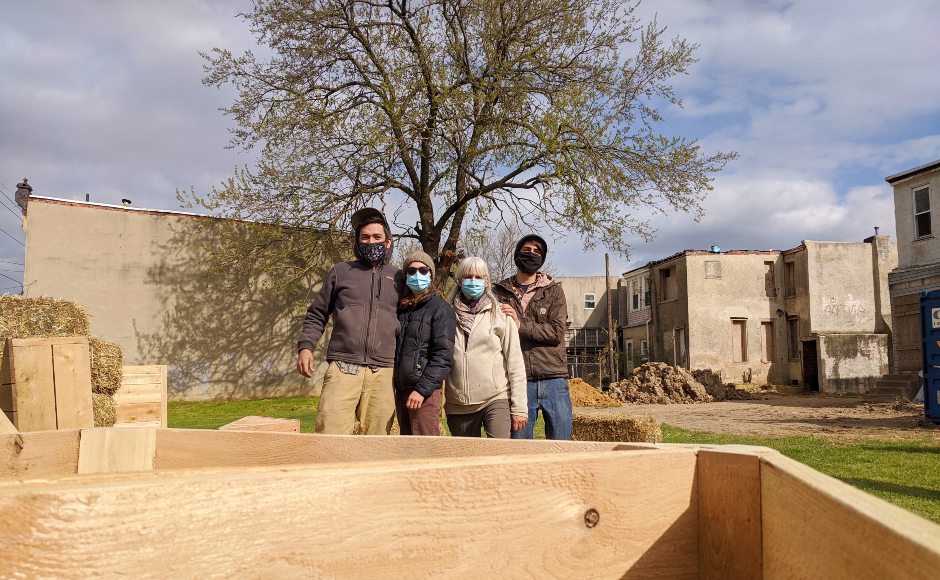 On Thursday afternoon, Athena Steen and Josh Sarantitis were just beginning to lay the groundwork for their installation, “Touching the Earth,” at 5th and Erie Streets.

Surrounded by raw materials, including straw, clay, and sand, the team was assembling the makings of a pocket park, complete with wooden planters and an outdoor pizza oven.

Despite its “COVID-delayed onset,” Steen, who traveled to New Jersey from Arizona, said the project would deliver a two-week collaboration with neighborhood residents to reshape the space, a residential lot bordered by half-demolished and vacant properties.

“Between planting, growing, eating, and sculpting with clay, the real fun will be when people show up,” Steen said.

“We’re hoping with the community being a part of it, that they’ll take care of it; they’ll see it as theirs,” she said. “Whether this stays or not, [we hope] that they’ll be creative with this space.”

Similarly, “The Phoenix Festival,” by Donna Dodson and Andy Moerlein of Boston, Massachusetts, aspires to channel the spirit of communal rebirth at the center of “A New View.” Situated in the 1400 block of Federal Street, at the gateway to East Camden, two woven bamboo firebirds loom three stories above an outdoor amphitheater erected on the site of the former city incinerator.

To Dodson, the installation offered “a reason to experiment, expand, stretch,” and an opportunity to collaborate with local artists. Children from the Thomas H. Dudley School, whose mascot is the phoenix, helped create the flags that adorn the birds. Teens in the local Mighty Writers program lent their voices to the quotations inscribed on rows of colorfully decorated benches. 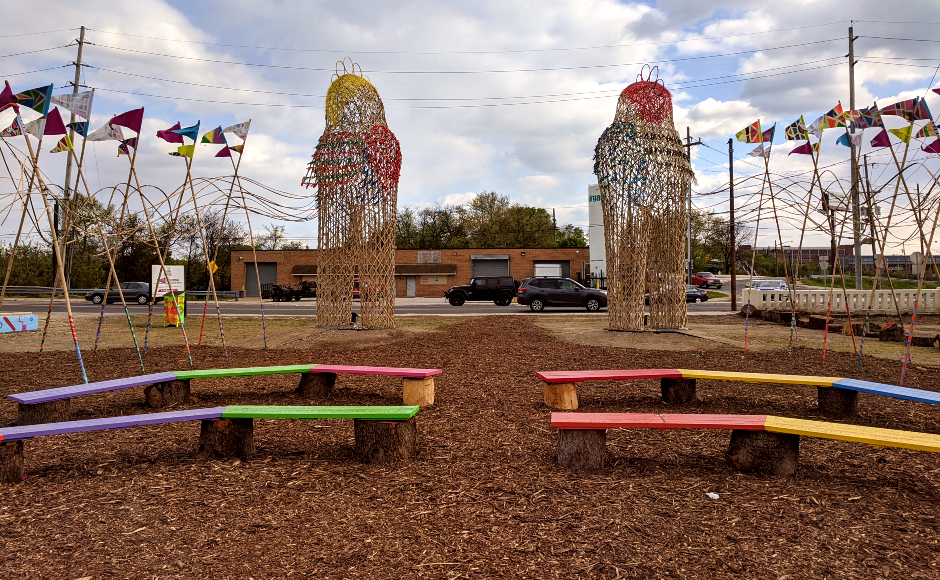 “When we were first trying to meet Camden and prepare an application, we met the Mighty Writers,” Moerlein said.

“They were so inspiring, we said, ‘we’ve got to work with these people,’” he said.

“Their pride of place was immense.”

“These kids are of an age where your identity is forming,” Dodson said.

The messages on the benches range from inspirational—“We can fix Camden. We can fix anything.” (Angelo, 15)—to heartbreaking—“People think since we are from Camden we won’t be anything. I am going to prove them wrong!” (Ashon, 15).

Almost anything can put a chip on a teenager’s shoulder, but it’s unthinkable for those who don’t live in the city to grasp remarks like those put forth by 14-year-old Nayali. Her pride of place is reflected in surviving a Camden City childhood; “growing up with nothing, and making it out of the trenches with something.”

Similarly, 15-year-old Aaizon hopes that, in hindsight, his Camden upbringing will be “a rough part of my life that I’m going to look back at and know it made me stronger.” Fifteen-year-old Jovan writes, “Some people view Camden as a bad place. It is my job to prove them wrong!” 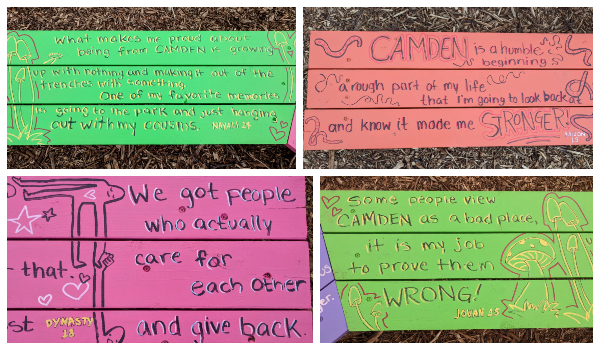 Perhaps that’s the new view that the project really hopes to present: one that won’t have children second-guessing their self-worth because of the zip code in which they reside.