Ash Maitra is retiring Le Cafe Creperie and turning the storefront over to his son, Arnab, who will reopen it as a wood-fired pizzeria this spring. 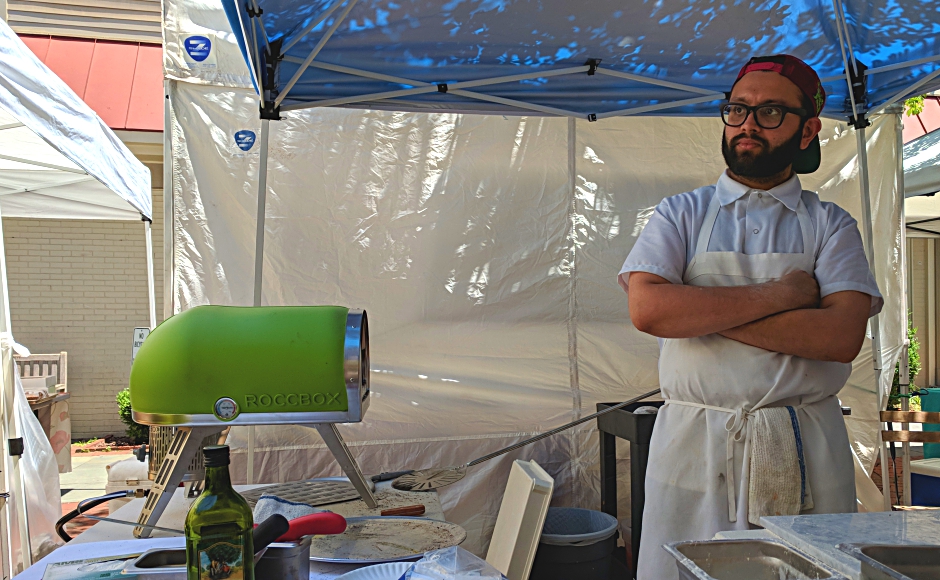 Pizza chef Arnab Maitra is popping up with his Roccbox oven and a headful of recipes. Credit: Matt Skoufalos.

After two years of growing his artisanal pizza business from a farmer’s market staple to a microbrewery pop-up, Arnab Maitra is ready to take his concept to the next level.

Pizza Crime, so named because a friend once told Maitra his pie “tastes so good it should be illegal,” found its footing with a tiny tabletop grill and a series of small opportunities.

It’s also getting the full Italian nomenclature, transitioning from Pizza Crime to Pizza Crimine, in the upgrade.

Trained as a pizzaiolo under Marc Vetri at the Moorestown Osteria, Arnab Maitra helped open Pizzeria Vetri at Rittenhouse, and was the head pizzaiolo at Porta before leaving to help his father, Ash, at the creperie.

Arnab Maitra credits Vetri not only with fostering his deep love of pizza but also with creating the environment in which he made some of his fondest memories in the kitchen.

“We were listening to hip-hop, making pizzas, and we couldn’t believe we were having so much fun,” he said.

Like one of his hand-tossed pies, Maitra’s career has come full-circle. From the windows at 139 King’s Highway East, he’ll be able to look out across the street at the Haddonfield Farmers Market, where he first launched his business. 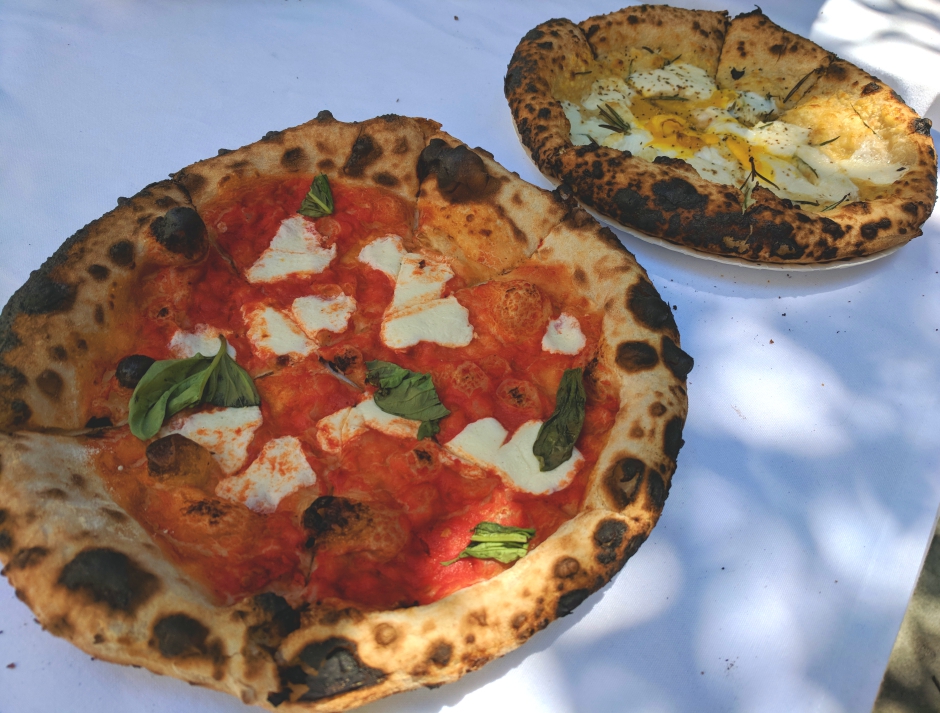 “People have constantly been asking me, ‘When are you going to open a place?’” Maitra said.

“I got a pulse of what people like doing from pop-up nights at Le Café Creperie and at Love City Brewing in Philly.

“After working for other people and learning and deciding what I enjoy, I get to practice my own stuff,” he said.

The décor hasn’t been worked out yet, but Maitra imagines the space will have a minimalistic, rustic feel, the better to showcase its centerpiece: the Forza Forni Joy oven.

The hand-built, Italian hearth-style brick oven is designed in Modena, Italy, and will be shipped over to America where it will be built within the restaurant.

“I want people to walk by and see this huge oven with fire blasting,” Maitra said. “I want there to be a line out the door on a Friday with people who want to see the action.”

As well as cooking foods faster at high heat, wood-fired ovens add aroma and a charred flavor to ingredients. Maitra’s menu will take advantage of that technology in a dozen core pizza recipes, six of them vegetarian (some of them vegan), plus a few salads, appetizers, and desserts.

In addition to staples like margherita and pepperoni, Pizza Crimine will offer varieties like tuna and dry oregano with shaved red onions, octopus with chickpea crema and lemon, and dessert pies like nutella, banana, and strawberries.

Eventually, a brunch menu will feature egg-topped pizzas; Maitra plans to complement these with special steak and fish dinner dishes and prix fixe meals. He’d like to bake his own bread, too. 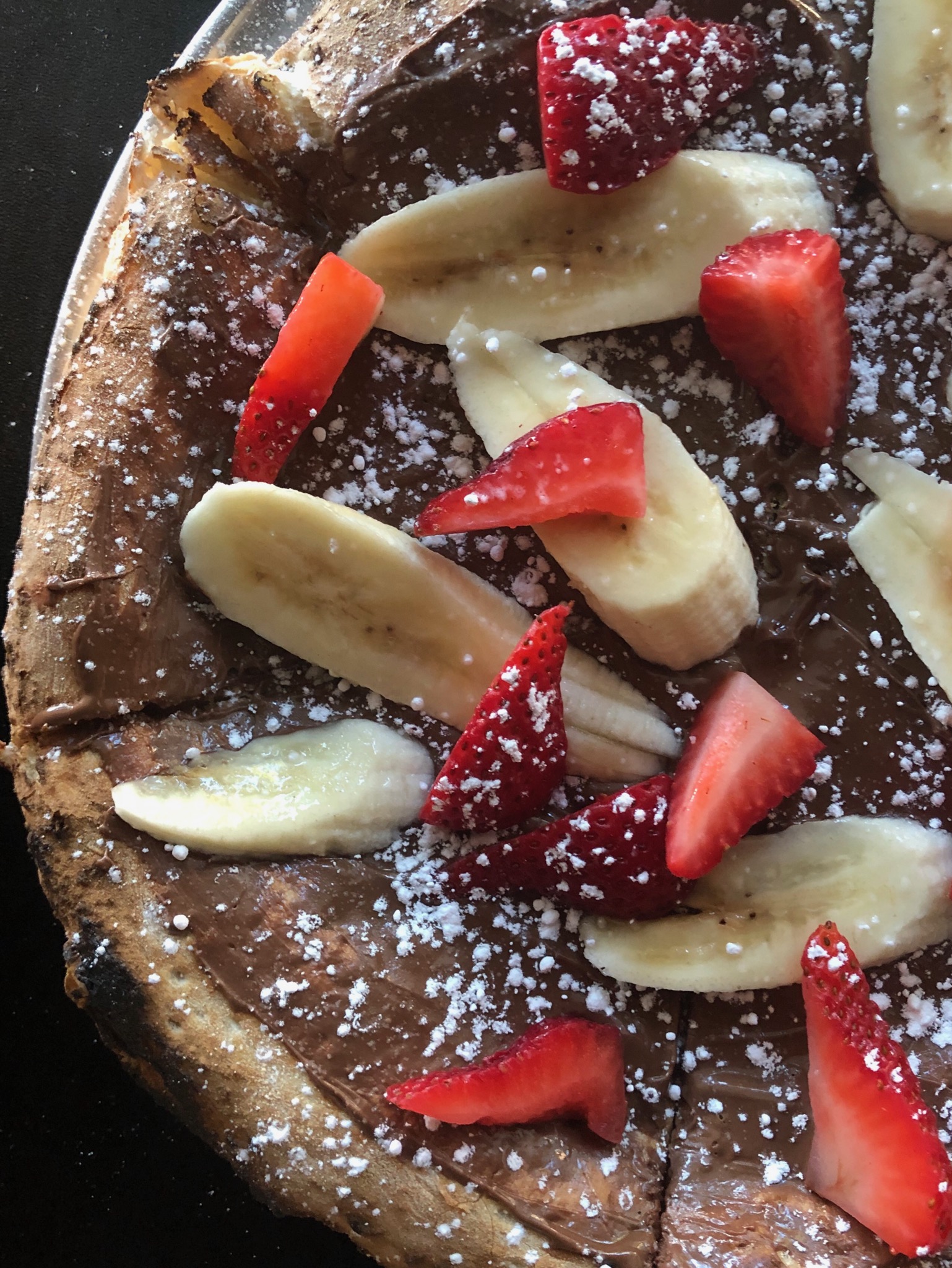 “All those little things matter,” he said.

“I’m going to be expediting every pie, making sure the integrity of my pizza is upheld.

“After doing these pop-ups where I’m limited, everything’s going to be a lot easier,” Maitra said.

Pizza Crimine will seat about 24, Maitra estimated, with another 14 to 15 dining al fresco during the warmer months.

He expects to do a heavy takeout business, not only from borough residents, but from guests at the nearby King’s Road Brewing Company, just a few storefronts down.

“I think the local food scene is thriving and getting better and better,” Maitra said.

“King’s Highway is turning into Restaurant Row, which is great.”

There’s nobody more excited for Arnab’s dream to take flight than his father, Ash, who’s retiring from Le Café Creperie to give Pizza Crimine a place to get off the ground.

“I’ve got a talented person taking over and doing something that is very much going to be an asset to the town,” Ash Maitra said. “And people want it.

“Interactive places like this you can’t buy online,” he said. “It increases the experience factor.”

The pizzeria is targeting a spring opening, with the specific timetable contingent upon the delivery and construction of the oven and remodeling of the creperie interior.

Even at just a few months away, Arnab Maitra can’t wait to open up shop.

“I’m excited to turn the restaurant around really fast,” he said. “I get to make pizzas all the time, which I love doing.”