Trending
You are at:Home»Arts»Game of Thrones Episode 8.1 Recap – Game On

In this episode: reunions, reprisals, and regrets abound, as the final season of the epic tale kicks off. 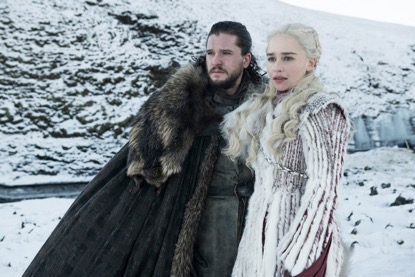 I’m not five minutes into Winterfell when my dog starts acting like a chucklehead.

He’s plopped on his side, desperately raking his paws against the base of my couch to retrieve a little stuffed bunny he’s lost somewhere underneath.

I pause the episode and get it for him… and a moment later, the little dingus kicks it back under and starts pawing again.

And this is exactly how I feel about the end of Game of Thrones.

I’ve spent the last year and a half wanting it to come back… but now that it’s here, a part of me wants it to go away again – to kick the bunny back under the couch, as it were. I don’t want to see the characters I like die in manners gruesome and swordy. I want The Hound and Varys and Davos to thrive. Maybe get a flat together, spend the odd Saturday reminiscing over flagons of mead at Tormund and Brienne’s place. Wouldn’t that be nice?

But alas. Nothing lasts, as Varys so dourly said (he’s become such a sourpuss. I love him). The end is coming… so let’s meet it together. Verily shall I grasp the bunny (my house words, btw). I will watch this season to its brutal bloody end… and I’ll tell you the things I see along the way.

Once more unto the breach, dear nerds. And now our watch begins. 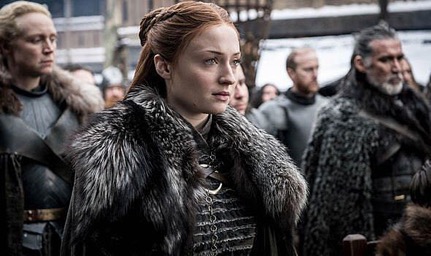 Winterfell is hoppin’, you guys.

Everywhere ya turn, there’s a face that needs washing.

Scores of scabby Northerners crowd the streets to smolder and frown as the Unsullied and Dothraki legions march by.

Dany has arrived in force. And nobody’s happy about it.

They don’t clap. They don’t smile. Hell, nobody even blinks until her dragons shriek through town like a couple of leathery dirtbikes, sending the hoi polloi a-scramblin’ back to their turnip trucks.

Nearly every morally decent(ish) character left has saddled up and sallied North at this point. And for at least a third of the episode, we watch as the dramatis personae bobble about stiffly hugging and hello’ing like a high-school reunion from the Dark Ages (Class of ‘700 — Thou Art 2 Cool 2 B 4gotten).

Some of these reunions are downright lovely, Jon and Arya’s hug beside the Heart tree especially. It’s nice to see Arya smile over something other than arterial spray. But no matter who we meet in Winterfell, the reception always winds up a bit… chilly.

Arya and The Hound. Sansa and Jon. Sansa and Dany. Sansa and Tyrion (Sansa’s tough…). However warmly a conversation may start, winter always falls in Winterfell, frosting everything over with wariness, skepticism, and disappointment.

At the heart of it all is, of course, the smoochy fealty between Jon and Dany. The Northerners know no King but the King in the North. And the King in the North… knows nothing. Jon tries to reason with everyone—his sisters and his bannermen (and women!)—he urges them to remember that the true enemy is the shambling horde of dead fellas, a hundred thousand strong.

Tyrion also has a go at speaking truth to glower. But the sad, frustrating reality is one they’re sure to learn this season: just because you’re on the same side doesn’t mean you stand together. 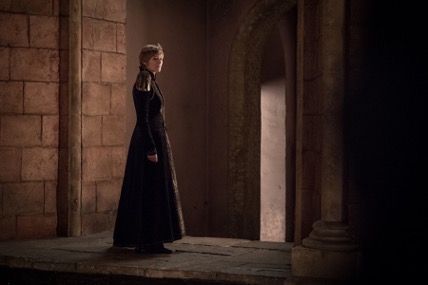 Meanwhile, back at King’s Landing, Cersei Lannister sips from her ubiquitous goblet of wine, and takes stock of what she has at her command.

The harbor’s full up with the world’s mightiest armada.

She’s got a bodyguard made entirely of zombified murder meat.

An advisor who moonlights as a vivisectionist and pervert.

She’s got 2,000 horses, exactly zero elephants… and no one else.

Cersei Lannister has it all. And she gave up everything to get it.

Sneering from her throne, she greets the co-captains of her military. There’s Harry Strickland, the granite-jawed babe captain of the Golden Company. He’s kind of a Ser-Patrick-of-House-Bateman type who speaks in a haughty tang, has perfect hair, and dons a golden panoply and jodhpurs.

And then there’s the leather-clad, wang-dangling Euron Greyjoy… less dressed to impress as dressed to press the empress, if ya catch my drift. Cersei finally relents to his incessant euronuendo in this episode… and deigns to give him what he’s always wanted. After the deed is done, she pours herself a much-needed drink, elides his pillow talk, and tries not to cry until he leaves.

It is a credit to Lena Heady, and the men and women who’ve written her character, that I can still feel sympathy for Cersei Lannister. Relenting to Euron’s want is an inevitable act in the arc of her character, and it’s properly heartbreaking. Cersei has spent her whole life resenting her femininity. Or, rather, what femininity means in a culture where men wield the swords and therefore the power.

Over seven seasons, Cersei has shed layer by layer what makes her a woman in Westeros – her husband, her children, her dresses, her hair. Look at her now: as sleek and deadly as a stiletto. Cut. Trim. Military. She’s an echo of her father. She’s murdered her enemies, terrorized her people, burned whole Houses to the ground. She sits on the Iron Throne, the literal seat of power… and yet even with a crown on her head, she’s still ultimately meant to lie down for a man. A lesser man. All of them, lesser men.

Speaking of anti-climaxes—Bron! (I’m sorry…) The poor bastard’s doing his damnedest to enjoy a ménage à quatre with some ladies of the evening, when he’s interrupted by Qyburn, leering and reptilian, his hands clamped enthusiastically over his genitals.

He’s come with an offer from the Queen: Kill my brothers, and I’ll give you everything. I like that Bronn’s got an arc, and all, but it’s hard to imagine him actually going through with it, even as Qyburn hands him Checkov’s crossbow. I guess we’ll have to wait and see. 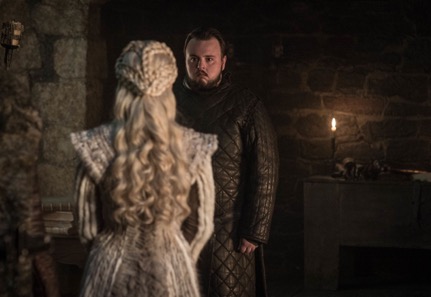 Meanwhile, back at Winterfell, everyone’s worried about the fate of the tawdry Targaryen twosome, Jon and Dany.

Tyrion, Varys, and Davos Seaworth, the three Numbers Two, are going full yenta, picking and talking and cheep-cheep-cheeping over how to get these two kids to settle down.

The sisters Stark, however, feel otherwise.

They seem to suspect what I’ve felt all along: that Daenerys Targaryen isn’t the sweet-hearted, chain-shattering suffragette she purports to be. Sansa, ever the clever stratega, bridles at the notion of kneeling to Dany. “We just got our home back,” she seems to say, “and with the bat of an eye and the flap of a wing, you give it all away to this chippie?”

As fun as it might be to see Dany and Jon climb astride her leathery skypuppies and soar off to make the beast in the world’s least-hospitable sex cave, Sansa’s got a point. And it’s one I’ve made elsewhere and often: Dany is not a good leader.

She’s not a kind leader. She’s brutal, and entitled, and impulsive. She views the Seven Kingdoms as something that’s owed to her – a place she’s never been, and a people she’s never known. She longs to free them all from the yoke of oppression… and anyone who questions her boundless compassion will be summarily incinerated by her dragons.

Take the Tarlys from last season. How quick she was to turn Sam’s kin to kindling. Oh, Sam. Dany breaks the news to him, and it’s properly heartbreaking to watch him crumple from his usual bright-eyed enthusiasm to a broken little boy. I love Sam. I love Sam so goddamn much. Bravest character in the whole damn story.

He pulls himself together enough to find Jon lurking in the family crypt. They embrace and gab, and are their usual, cute-ass selves for merely a moment before Sam pipes up and spills the Targaryen tea. He tells Jon of the brutal fate that befell his brother, and Jon, as you’d expect, tries to see the other side.

I love this scene. And I love the complexity of Sam’s last line. “Yes, you were a king in the legal sense. You’re a Targaryen and a Stark, and you have a legitimate legal claim to the throne, etc. etc.” And sure, that’s interesting and exciting and will no doubt be very dramatic in the weeks to come.

But what kills me is what I think Sam really meant to say: that to him, Jon’s always been a king. Noble. Decent. A leader. Not because he demanded loyalty, but because people followed him. If you want a good leader, start with a good person. As far as I’m concerned… ‘shippers be damned… the only decent Targaryan is Jon Snow.

We’ll see which one, if any, winds up where they belong.