Trending
You are at:Home»Arts»Game of Thrones Episode 8.2 Recap – The Iceman Cometh

In this episode: with their enemy at the gates, the denizens of Winterfell reflect, commiserate, and ponder their uncertain fates. 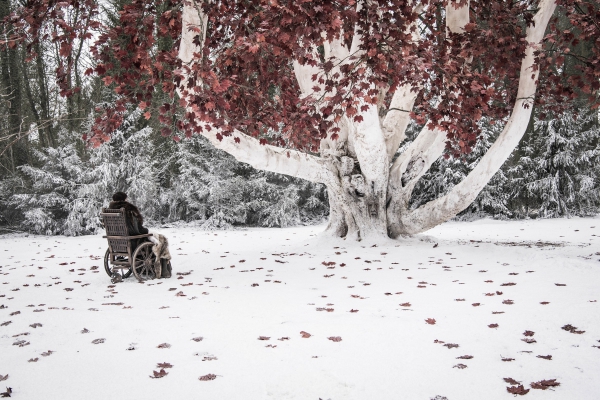 Have any of you lovely, exciting people ever been in a play?

I ask because… well… I needed an intro.

But also because, as an erstwhile community thespian myself (I was worse than you might think), it’s all I could think about while watching “A Knight of the Seven Kingdoms.”

Everyone’s hustling to prepare for the Westerosi Plays and Players production of The Iceman Cometh. Curtain goes up at dawn. Everywhere you look, someone’s haulin’ muffins: putting the last touches of dragonglass on the sets, or rehearsing their fight choreography. One or two castmates nip off for a drink, or slip into a closet and out of their breeches for an impromptu, pre-show tumble.

One by one, our beloved characters perform their own variation on an agonized, terrified thumb-twiddle. And while “Knight” may have had its moments of genuine emotion, the overall experience was, well, kind of a drag. We’ve already had one episode of table setting; now we have two.

I never thought I’d say this… but I’m ready for the Night King to kill somebody.

Time to get this show on the road. 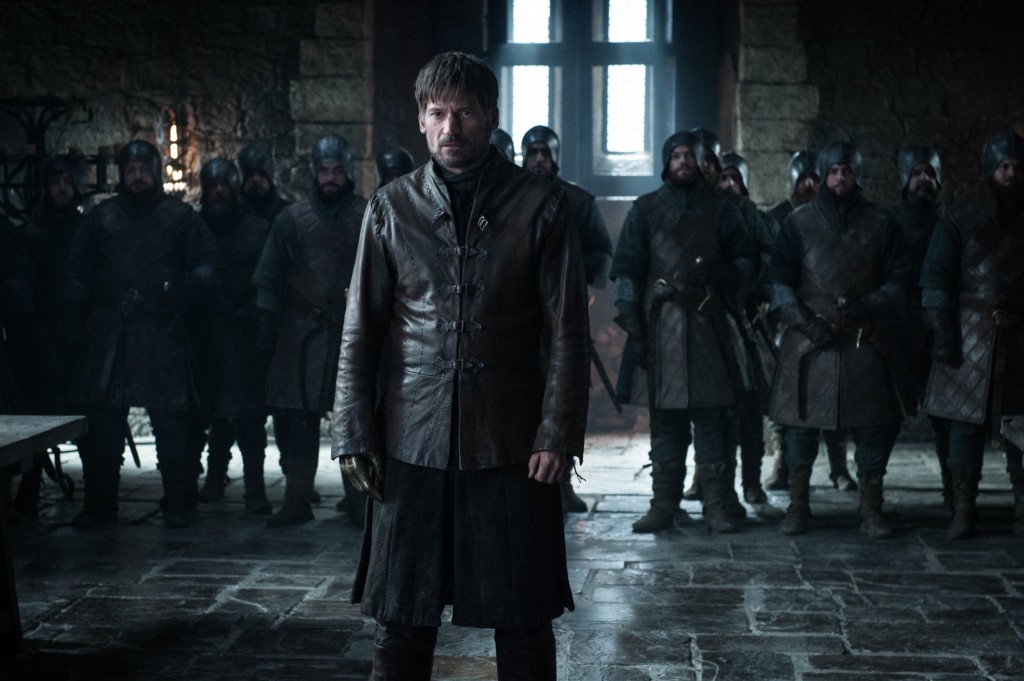 If there’s a heart to this episode, it thumps for Jaime Lannister.

But then… whose doesn’t, right?

We open where we left off last week: transfixed on his lovely, baffled expression as he comes face to face with what’s owed to him.

What that amounts to, however, isn’t all that clear.

Jaime’s is one of Game of Thrones’ murkier moralities. He has willingly done countless wicked things, but in service to his own and others’ benefit. Sure, he may have begun as an incestuous, child-crippling fop. But he’s become a properly honorable man. Decent, brave, and worthy of another chance. So what punishment, if any, should he receive?

Well, in the Northern justice system, moral debates are settled by three separate but equally important rhetorical modes. These are their stories.

First up is Dany who, to no one’s surprise, makes a Pathos argument. All emotion; not much reason.

You killed the father I never knew, who by all account was a miserable pyromaniacal prick. That was mine, and you took it. Tremble at my petulant disapproval. Someone burn this guy?

This is followed up by a Logos argument from a somewhat preoccupied Jon Snow.

Wha? Sorry, I was someone, er, somewhere else. Look, Winter is coming. We aunt spare the men. I mean can’t spare the men. What did I say? Aunt? Ha! What a dumb thing to do. <looks at sundial strapped to wrist> I gotta get goin’…

Lastly we come to Ethos. Moral authority. And who better to represent it than the nine-foot, gender-queer paragon, Brienne of Tarth. She stands for Jaime and points out what everyone outside the television already knows.

Jaime is a good man who has done bad things for good reasons. We owe our lives to him. You can’t trust him, sure. But trust me. Let the dreamboat go.

Sansa listens. And just like that, Dany gets a glimpse of what a real leader looks like. (#TeamSansa)

Bran, meanwhile, keeps mysteriously quiet. More than usual, I mean. Surely he could have testified to Jaime’s wickedness… having been pushed from a window and subsequently crippled by the jerk. But nope. Not a peep.

When Jaime asks him why he kept quiet… Bran digs deep, and pulls the subtext all the way up into the text with some dorm-room philosophy.

JAIME: I’m not that person anymore.

BRAN: You still would be if you hadn’t pushed me out of that window. And I would still be Brandon Stark.

SOMEONE ELSE NOW: No. I’m someone else now.

Every effect has a cause. Every action has a cost. Jaime pushed a little boy out of a window, and set them both on a path toward their mutual fates. For Jaime, it would cost him his hand, his family, and his identity, but it would give him back his honor. He would unmake himself into the man he was born to be.

As for Bran, he’d lose his legs, his innocence, and eventually, his name. He’d relent to become the Three-Eyed Raven. And that’s okay: if you want to fly, you have to be willing to fall. 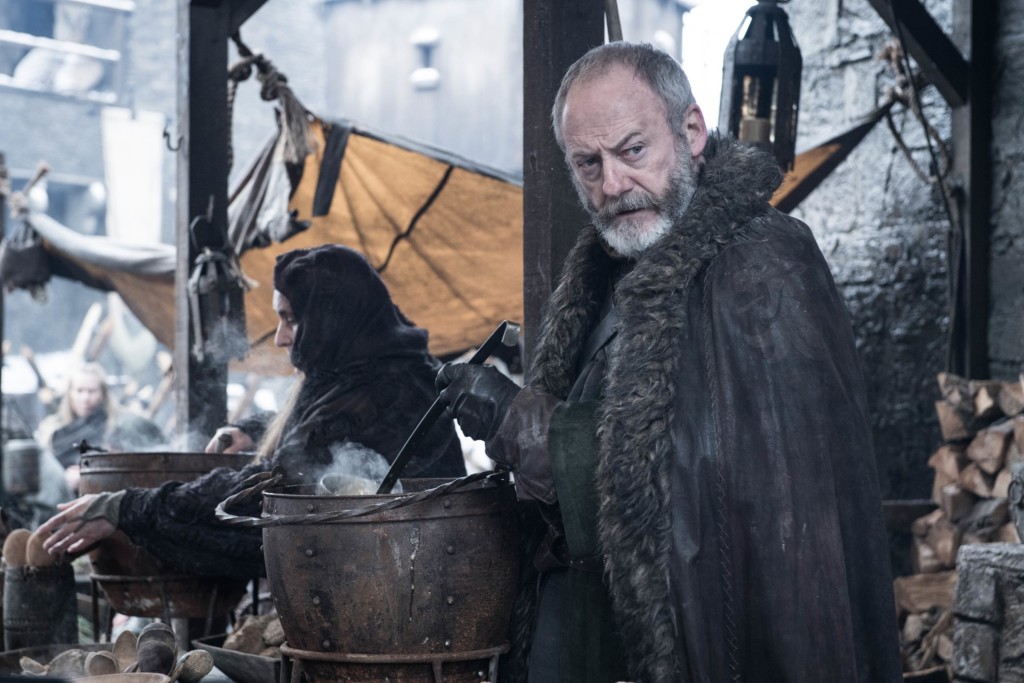 For the rest of the episode, we do pretty much what the characters do… sit around and wonder who’s gonna die.

“Knight” serves up vignette after vignette like a run of tapas plates—tasty, but not very filling.

And the result is a bottle episode without much structure, conflict, or interest.

Look, don’t get me wrong — I live for a bottle episode. Talking is my mutant power (I never shut up), and I can suck characterization from a scene as a weasel sucks eggs. Give me a Westerosi tribute to My Dinner with Andre any day (My Chicken with Sandor?). I can handle it.

But bottle episodes aren’t just about talking. They’re about conflict. And these scenes, lovely though some of them may have been, didn’t have much conflict because our characters are more or less developed already. We know who they are. And so do they. Nobody has any growing left to do. At this point, they just need a chance to walk around and say goodbye to each other.

So that’s what the episode does; it sets up next week’s send-offs… and it’s a bit of a mess.

Compare it to Season 2’s “Blackwater” (not exactly a bottle episode, I realize), and you’ll see what I mean. Remember “Blackwater”? The climax of Season 2? Where the battle outside forced the characters trapped in King’s Landing to reveal their inner nature not merely to us, but to themselves?

When there was no one to lead the charge, Tyrion revealed himself to be a man of uncommon bravery, wielding his eloquence in one hand, and a battle axe in the other. Meanwhile, when faced with impending doom, Cersei drank herself into a cynical stupor and spelunked the abyss of her unhappiness.

You could feel the tension because the episode, and the season as a whole, were meticulously plotted. All the storylines ground together and extruded the internality from the characters like squeezing a tube of Aquafresh.

But this time around things felt less vital. Not because I care less about the characters, or because the actors didn’t do them justice. Far from it. But rather, because there simply isn’t all that much left to say other than goodbye.

That’s because Game of Thrones isn’t really a game anymore. We’re in endgame now—we’re no longer making new moves, so much as realizing the cost of the moves made turns ago. The game… is up. Sadly, the time has come to watch as our best pieces are taken. Now we sacrifice.

Now we lose. Or now we win. But either way, the game is coming to an end. 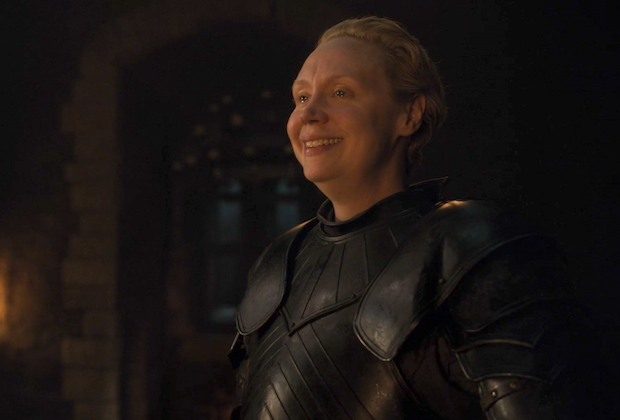 For all my griping, there is one scene that absolutely saves this episode, and that is the knighting of Brienne of Tarth.

Gormless and goony and entirely despite herself, Brienne smiled and made my heart light up like a goddamn Christmas tree.

Let’s talk about it a bit, shall we?

We start the scene with the Lannister boys, knockin’ back wines and reminiscing about dread old dad. How funny it would be for him to see them there, in the home of their sworn enemy, about to die to save it. They laugh a bit. And drink a bit. And one by one they’re joined by Brienne and Pod, then Davos, and Beric, and Tormund, all of them looking for a little warmth, a little light… really, just to not feel so alone.

We return to this scene a number of times in the episode, and each time we cut back, we can see that the characters are a little cozier, a little looser. A little more drunk. Tormund makes the occasional awkward pass at Brienne, and is rebuffed each time.

(Guh, I ‘ship them so hard. I find their romance utterly enchanting, personally. I long to receive a dorky family newsletter from the “of Tarth-Giantsbanes!”)

I know he’s a bit dim, but there’s something wonderfully open-minded and egalitarian to Tormund. In fact, it’s really him that brings up her non-knighthood. He’s incredulous to discover that, south of The Wall, only men get to be knights. Brienne brushes it off, used to a lifetime of disappointment. But Jaime will hear nothing of it. Any knight can make another knight, he insists.

She doesn’t believe it at first. She sits, resolute, upright, maybe just terrified that she’ll be mocked if she believes it. But, ever the brave one, she eventually rises, kneels… and looks on in wet-eyed wonder as Jaime gives back to her what she worked so hard to help him find. Honor.

I just re-watched the scene and cried a bit. Right at my computer. Makes me happy and sad all at once. Here, ya know what? Stop what you’re doing and watch it. Take a break from the day, and watch someone get what they actually deserve.

Here’s to the good guys. And gals. And everyone in between. Here’s to Ser Brienne of Tarth, a knight of the seven kingdoms.