Trending
You are at:Home»Arts»Game of Thrones Episode 8.4 Recap – Throne in the Towel

In this episode: how much has HBO’s prestige series degenerated into a latter-day Walking Dead, anyway? 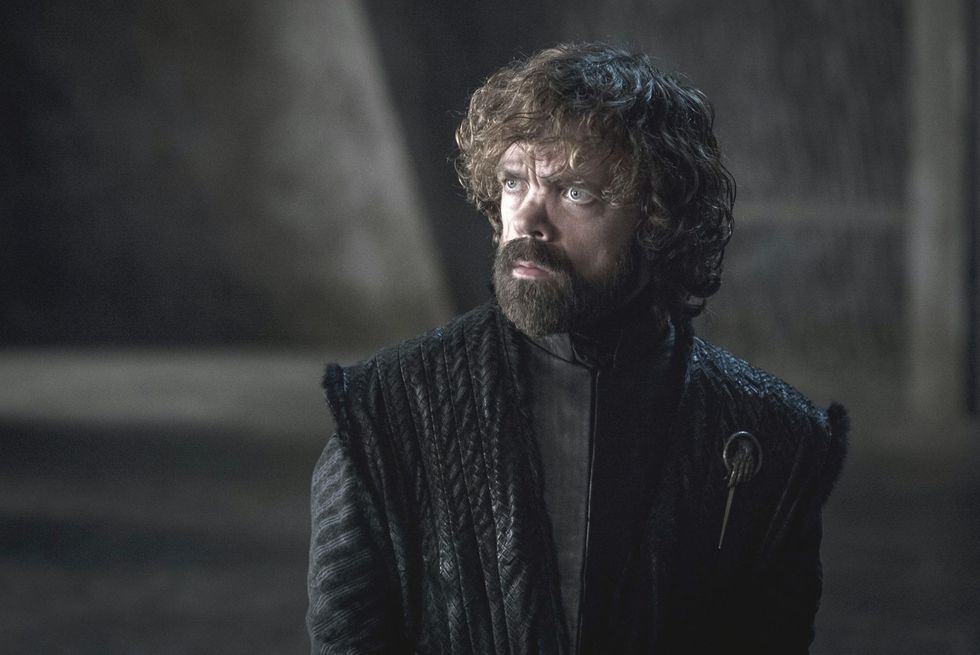 I really want to write something worth reading here.

I want to find an interesting idea in this episode, hold it up to the light, and describe it to you with wit and gusto.

I want to grapple with a compelling theme.

Or roll up my sleeves and pan for nuggets of subtext. Shit, I’d be happy to just crack a good joke. But having just sat though 90 minutes of “The Bells,” the only thing I can think to say is:

Sitting down to write this, my first (and near-overriding) thought was to write that, “whatever,” 1500 times in a row and then call it a night. I mean, I’ve got work in the morning just like you. And if Game of Thrones has stopped thinking about itself, why would I spend my time thinking about it?

I don’t mean to be petulant, and surely the Internet is already dripping with snark passing as substance. But I’m tired. And I’m bored. And I just spent an hour-and-a-half watching this show thoughtlessly obliterate something it’s spent years trying to create.

To borrow an observation my girlfriend made tonight, it makes me sad to think that this episode may be how Game of Thrones will be remembered: capably shot, superbly acted, and ultimately hollow. 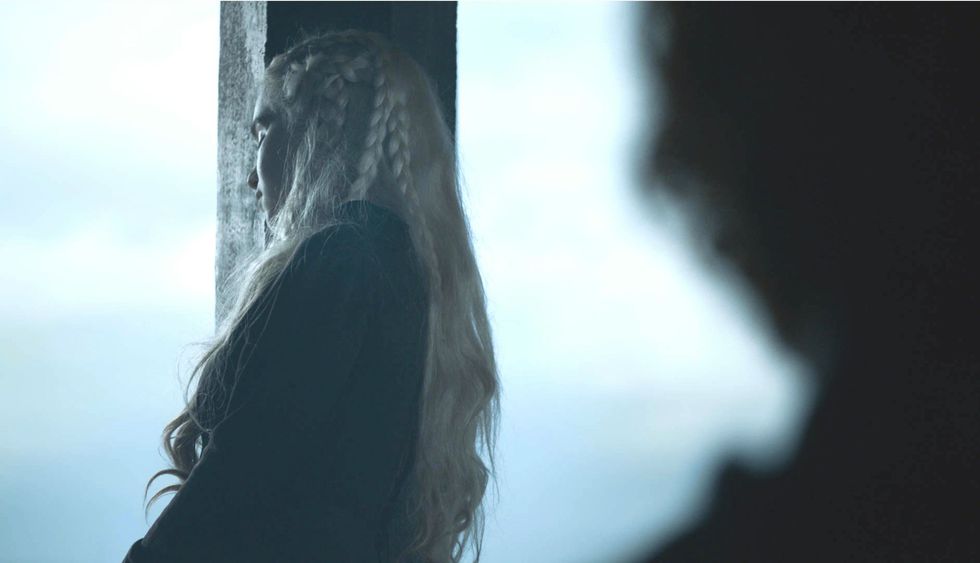 When we find Dany this week, she’s holed up in Dragonstone, her sanity as frayed as her hairdo.

Tyrion approaches and informs her of her latest setback: Varys, everyone’s favorite murder melon, has been conspiring to supplant her with her nephew.

Dany is unsurprised to learn this. She’s so deep in an oubliette of depression and paranoia, departures such as these have become inevitable. She orders and later presides over Varys’ execution (my love…) with anesthetized dispassion. She’s barely there.

I’ve made no secret of my distain for Daenerys Targaryen. I called my shot on her going full Kurtz early last season. I think she’s spoiled and entitled and petulant and monomaniacal, and I have always rolled my eyes at the show’s insistence that I see her as some kind of monarchy-shattering suffragette.

But even with all that, I still think “The Bells” did her a terrible disservice by hinging her violent turn on a single, jagged impulse rather than the smartly plotted arc it deserved.

Let’s take a moment to consider things from Dany’s perspective.

Imagine you spend years struggling through violence, rape, and suspicion. You survive warlocky shenanigans, assassination attempts, aristocratic revolts, the betrayal of friends, and the dreadful second season in Qarth. You amass a mighty army, assemble an improbable coterie of supporters and advisers, you sail across the world to press your claim… and the second you get there, some hunky half-pint asks you to help him save the world.

And get this: you do it. You halt your own ambition to help people you’ve never met, a choice that costs you your dear friend and bodyguard, half of your army, and one of your children. And then, at the after-party, you hear the people you saved celebrate your boyfriend.

You realize that they’ll never love you. And that the people who do are either dead, on the other side of the world, or are looking for the door.

It’s not hard to imagine that turn of events turning you into something bitter. Violent. Wrathful. These people will never love you, so to hell with them. Let them fear you instead. We can follow the logic, such that it is.

And yet, I’m willing to bet you were as gobsmacked by Dany’s sudden, tintinnabulatory napalm tantrum as I was. Somehow, this moment, the culmination of eight season’s worth of plot churn, felt unearned, random, and desperately unsatisfying.

“The Bells” is rife with unsatisfying anticlimaxes. Four of my favorite characters died in this episode, and each time I felt nothing. Not a tear. Not a whoop. Not even a gasp. Just a “whatever.”

And I’m not that hard an emotional mountain to climb, guys. I once crumbled into tears while reading the lyrics to “The Rainbow Connection.” I’m an Italian-American. All I want is to yell at you a little, and then go to a movie and cry in the dark. And yet I spent the whole of the episode nonplussed.

Because I can’t feel anything about a plot. I can only feel something about a character. And Game of Thrones, whether out of exhaustion, blunder, or misplaced intention, traded one for the other a while ago. Events that once were engineered by our characters’ choices just kinda happen now, propelled by no other force than narrative necessity.

This isn’t a story about characters anymore. It’s characters in service to a story. And sadly, there’s nothing interesting about that. I’m going to skip over all of the scene-setting that takes place.

We all know what happens: Dany decides to attack King’s Landing, and everyone listens.

So let’s just get to it, shall we?

When it finally goes down, the battle is a rather unsatisfying rout.

Despite all the barbed and brutal ballyhoo over Qyburn’s scorpions, Dany and Drogon make very short work of the King’s Landing battlements and utterly obliterate the Iron Fleet. Jon doesn’t even have to summon a charge; Dany does it all on her own, sweeping along the perimeter of King’s Landing, felling walls, firing fools, and obliterating the Molten Company.

(See what I did there? Wordplay.)

Anyway. Let’s talk about the bells.

Central to the action of the episode is Tyrion’s multi-scene insistence that somebody ring the goddamn city bells. The thought being that doing so would mark the capitulation of the capital and maybe stop all the needless beheadings, guttings, and general nightmare swordstuff.

It’s a fine idea, I guess. I’ve stopped holding out for Tyrion to have good ideas. But as a metaphor? That’s where things start getting a little interesting.

I may be giving the writers more credit than they deserve at the moment… but “The Bells'” bells were at least an attempt at a thematic structure for this last, late climax in the story. And while I may absolutely revile the cynicism of what they represent, I’m at least happy there’s something worth analyzing here.

Consider the scope of surrender in “The Bells.” There’s the city and the Lannister forces, sure. But there’s more: One by one, Jaime, Cersei, Dany, and Sandor Clegane surrender the paths they’ve been on, giving up their arcs, and crashing back down into the forces they tried so desperately to escape.

Jaime Lannister spent the last few seasons striving for a sense of honor. Unhanded and unmanned, he started down a path that took him toward the man we all knew he could be, and away from the sister who held him back. And then, last week, for no discernable reason… he saddled up and went back to her. Jamie heard the bells and surrendered to his own monstrousness.

Sandor Clegane had, for at least a few seasons, tried to find meaning or purpose in the world. And to his credit, that’s hard. The Hound has known only scarring violence and hate since he was a little boy. He tried to be a better man for a time. Look where that got him. Sandor went back to find his brother, and seeing no other alternative, fell with him into fire he’d tried to escape.

Daenerys Targaryen has spent years trying to outpace her violent lineage. The long, dark shadow of her mad father. But the more she tried to reach out, the more she tried to fix, the more alone she became. She’s claimed for years that she would bring death to tyrants and justice and freedom to the people. And then she heard the bells, and she surrendered to her anger and her loneliness… and she killed everyone she could see.

Despite all your efforts, the show seems to say, no matter how hard you try, you cannot escape who you are. There is no growth. There is no evolution. We fight, and crawl, and strive, and cry… until the bell rings for us, and we surrender to the gravity of our past.

I don’t know if that’s what they intend to say. But it’s what I heard. It’s possibly the most cynical thing I’ve ever heard. And I absolutely hate it.