Trending
You are at:Home»Arts»Game of Thrones Episode 8.6 Recap – And Now My Watch Has Ended

As the eight-season saga comes to a rickety conclusion, we try to make sense of where things landed at Kings Landing. 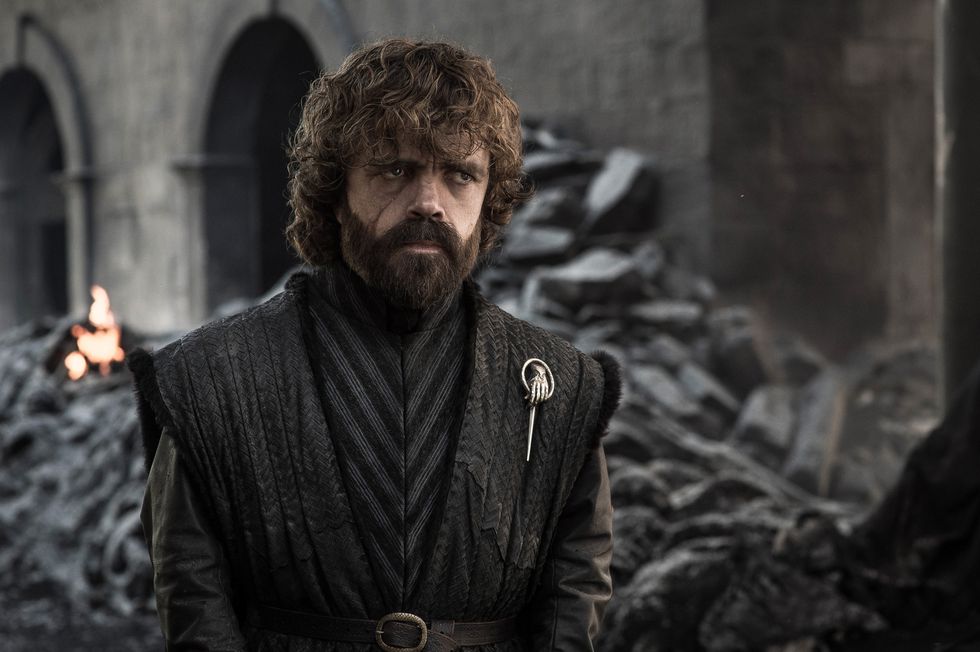 Game of Thrones claims to be a story about stories.

Tyrion comes right out and says it this week (almost directly to camera, at that!) in one of the Iron Throne’s sweatier moments.

To be fair, as clunky as that speech may have been, it was still correct.

This story has indeed been a story about stories.

The novels and the show have each served as deconstructions of the fantasy genre, its tropes and themes, character models; the worn narrative grooves we’re all so familiar with now. It enjoyed upending these expectations, and managed to wring some genuine drama, surprise, and fun from it.

But Game of Thrones also asked us to investigate the fantasies that have inspired these tropes; the social fables that underlie the stories we all tell.

Think about it hard enough, and you start to see: everything is fiction. All the world’s a stage.

When Game of Thrones was good—and it was good—it not only asked us to look hard at these questions, it seemed to have something to say about them, too. Maybe not an answer, but a point of view.

And yet, at the close of this story… that voice, that point of view, seems utterly silent. Unresolved. It feels like, in the dash to end its story, Game of Thrones forgot to finish it.

Yes, the majority of storylines have met their end. Characters died. Characters survived. The throne is gone. The Kingdom remains. The Queen is dead. Long live the King. The story was told.

But damn if I can tell you what the show wants me to take away from it. What it wants me to feel. Or think. Or even remember, short of the inconsistency of its characters, and the scope and volume of its battles.

Sound and fury. Signifying nothing. 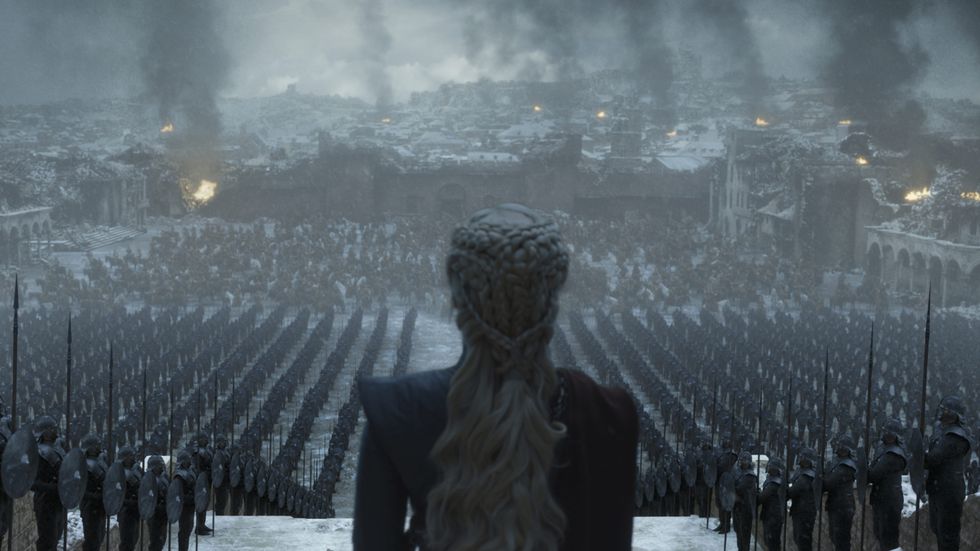 Tyrion trots through the ash-strewn streets of King’s Landing, past pile after pile of charred and twisted corpses.

The camera stays right by him, tight on his shoulder, registering his every glance, his fallen eyes, his heavy brow.

It’s a tough moment for him, clearly. His queen is a psychopath (apparently), and his best efforts to bring justice and avoid bloodshed have gone… wait for it… up in smoke.

And yet, something about the somber tone doesn’t sit well with me. And it’s because I don’t think Game of Thrones actually cares at all about the people of King’s Landing.

I can’t help but notice that the writers used them rather like Cersei did: as a pathos shield designed to elicit sympathy and advance their own interests. We never really spend much time with The People. Half the time we see them, they’re screaming vulgarities and flinging some version of shit at a principal cast member.

Last week we followed Arya and a mother and daughter as they fled (unsuccessfully) from Drogon’s onslaught. And sure enough, we return to the blackened moppet this week as well, the camera hovering on the brutally charred horse fused into her hand.

Do we care about this girl as a character? How can we? She’s just some girl. She’s got a name, but be honest: do you know it? Of course you don’t. Why would you? She was only in the story to die.

Game of Thrones essentially fridged an entire city, incinerated mothers and children on a scale of wholesale slaughter, just to give the main characters something to brood over. It’s some deeply cynical stuff.

I’m getting mad just thinking about it.

Anyway, we see the Targaryen forces arrayed in a smoldering courtyard. The Dothraki ride about, whooping and hollering, as is their custom. The Unsullied stand at perfect, castritic attention. Dany approaches in the foreground as Drogon’s leathery span unfurls behind her. It’s a really cool shot that captures how one-dimensional Dany has become—a literal Dragon Lady.

She stands at the top of an immense flight of stairs, villainously draped in black and red leather, and addresses her loyal soldiers (her subjects, being dead, were unable to attend). Dany declares victory, and the end of tyranny. The city smolders on, having no alternative.

As she continues her speech, we see the scope starting to creep. The war, it seems, is not over. It will never be over, so long as there are kingdoms to topple, and crowns to snatch. All will live safe under the blanket of her freedom, or die.

Tyrion, finally face-to-face with the truth about his queen, throws down the tiniest of gauntlets, hurling his Hand insignia down the stairs where it plinks sadly into the dirt. Whatever next atrocity Dany is off to, he refuses to be a part of it.

And for that, he’s frogmarched into a cell. 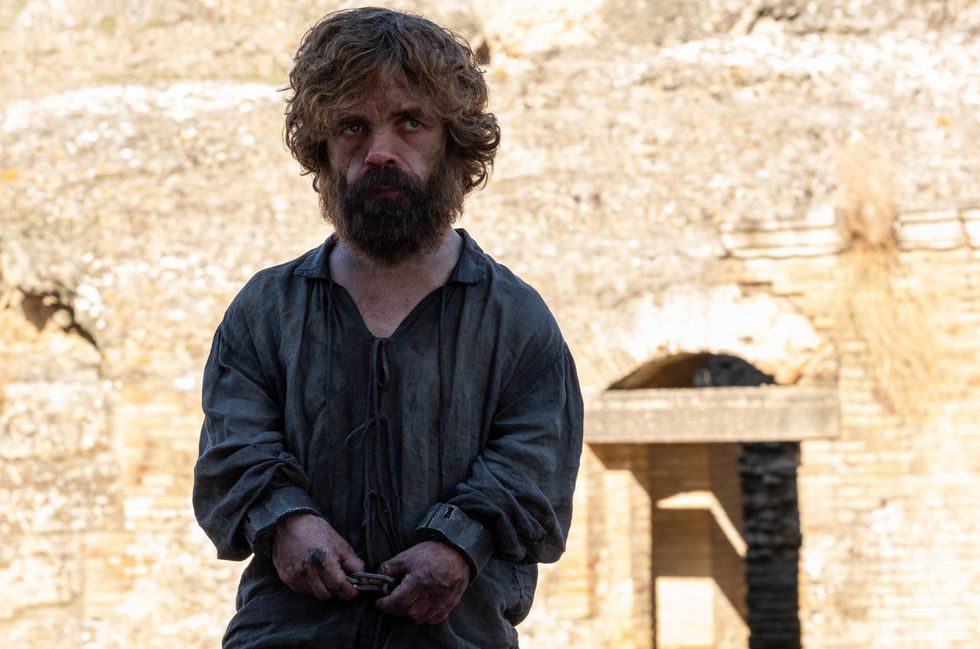 And so the lens falls to our other hero.

His Lordship Jon Snow, Earl of Gloom and Depressive Stares into the Middle-Distance Plenipotentiary.

It’s been a good five minutes since Jon did something thoughtlessly heroic and self-punishing… so it’s about time he fluffed his curls and ran headlong into something dopey.

Jon’s a bit of a lost little duckling at this point. He stops in to see Tyrion, apparently unsure of what the sensible move to make is. The two volley opinions about honor, duty, and love, both of them talking around the real heart of the matter.

Dany’s gotta go. Now. And Jon is, as is often the case, the best chance we have. The goof.

So… look… you know the rest. He puts a knife in her heart and she dies, feet from the throne she’d spent her life to attain. The irony of it.

For all of her speechifying and bombast, Dany meets her end with a reserved sense of quiet and a tasteful trickle of blood or two scribbling down her cheek. It’s possibly the calmest bladed exit the show has ever given us, and I’m inclined to wonder why.

Does Game of Thrones think we’ll think her death is a tragedy? Is that what we’re meant to take away? I know I’ve rung this bell a few times, but I just don’t know what I’m meant to feel about any of these characters at this point.

Drogon, however, has a pretty clear opinion on the matter. And he makes it known in one of the series’ more clunky metaphors. He rears back and lets fly a rage-fueled spew of flame not at Jon… but at the throne. That symbol of the corrupting influence of power, of inherited violence, of injustice primped and polished to a nauseating shine… it melts away like a forgotten candle.

Power is a menace, the writers seem to say. Power is the problem. Or so they would be if we didn’t leap forward a few weeks and watch as a bunch of smirking, landowning swells sit around and scoff at the notion of a representative democracy.

It’s not clear how the city has fared in the intervening weeks. As I mentioned above, the writers of Game of Thrones have very little interest in the welfare or status of the people. But it’s clear that someone has to assume the position. Someone has to lead.

And so the crown falls to Brandon Stark… because he… comes with his own chair? The reasoning is a little fuzzy. His makes for the best story, apparently. Personally, I think Brienne of Tarth or Sansa would have made wiser choices. But what do I know?

So—Bran is made king, and I’m tired and want to sit down and have a Fresca.

Jon, meanwhile, the True and Rightful Heir, and potentially the Prince Who Was Promised (Though That Might Be His Sister, Who Can Keep Track?) is sent back to the Wall for his crime of saving the world and murdering a tyrant at great personal cost.

This is done to satisfy the Unsullied, who leave for Naath with nary a word. And, let’s face it, it’s the life the guy always wanted. Up there beyond the wall, entwined in the arms of his savage ginger lover. By whom I mean Tormund Giantsbane. Those cuties all bundled up in their pelts, walking their giant dog in the newfallen snow, holding hands under the soft glow of the moon.

I’m happy for them.

One way or another, most of the surviving cast get what they want in the finale:

This is how we leave things: with new beginnings rooted in our main characters’ earliest inclinations. The wheel has come round.

This is not the ending I would have chosen. But we never really get to choose our endings, do we? Not often, anyway. But it’s an ending nonetheless. Clunky. Rushed. Happyish.