Trending
You are at:Home»Business»Gorshin Trading Post Expands to ‘Ends of the Earth’ with Mechanic Street Cigar Shop

Haddonfield retailers Mitch and Maria Gorshin are growing an offshoot of their Trading Post general store into a cash-and-carry cigar shop on Mechanic Street. 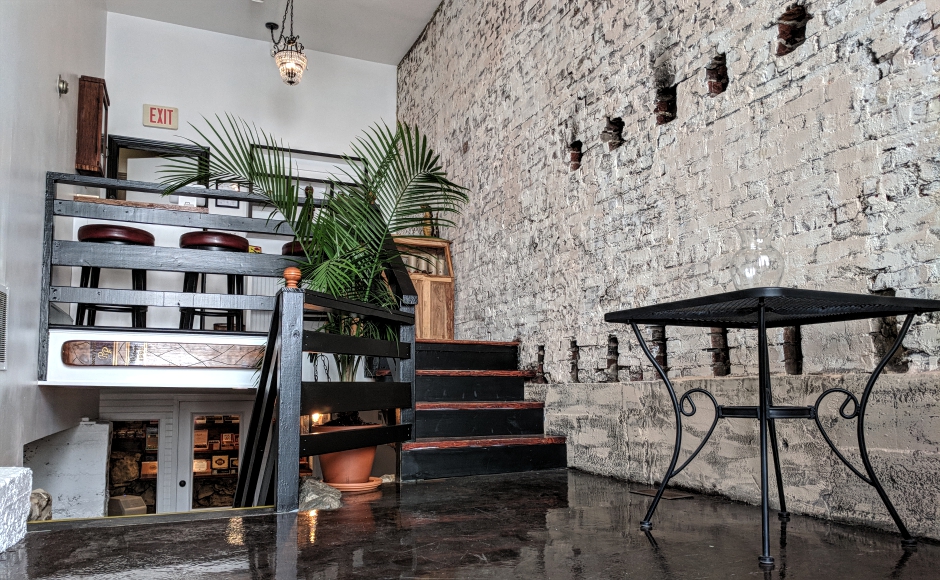 Ends of the Earth cigar shop is an offshoot of Gorshin Trading Post on Mechanic Street in Haddonfield. Credit: Matt Skoufalos.

For some Haddonfield business owners, Mechanic Street, just off the well-worn paths of Kings Highway and Haddon Avenue, can certainly feel like the ends of the Earth.

One of the most well-manicured blocks in the borough, it’s a frequent stop for the selfie set, and has provided the scenery for many a marriage proposal or impromptu fashion shoot.

But for Mitch and Maria Gorshin, who operate Gorshin Trading Post and Supplies out of the historic Gibbs Tavern building around the corner, it’s a place to expand their growing cigar business.

“We enjoy being part of Haddonfield,” Mitch Gorshin said. “We’ve watched our cigar business over four years, gotten friendly with our customers, and understood what they were looking for.

“Haddonfield is a town befitting a proper tobacconist,” he said; “a good cigar store with a walk-in humidor, great music, and a nice atmosphere.” 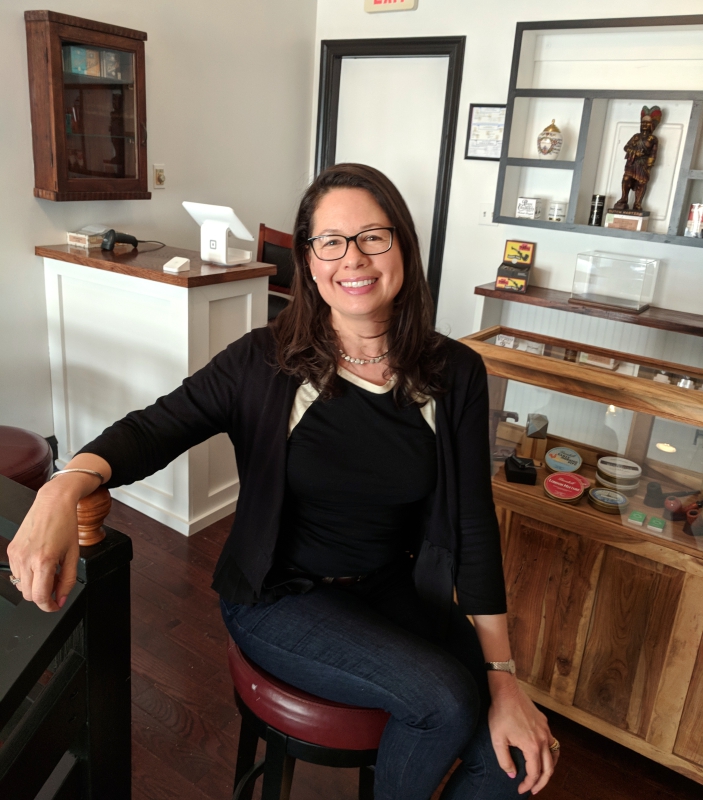 Maria Gorshin in the Ends of the Earth cigar shop. Credit: Matt Skoufalos.

“Mitch and I have always observed [Mechanic] Street and thought, ‘Gosh, that could be something even more special,’” Maria Gorshin said.

“It’s not just a street to walk through, it’s a place to linger and enjoy the atmosphere a little bit,” she said.

Creating a cigar boutique also allows the Gorshins to focus the Trading Post retail inventory for a family audience, while moving its tobacco products to one of the most photographed streets in downtown Haddonfield.

A boutique, cash-and-carry shop, Ends of the Earth will carry a selection of cigars from the Dominican Republic, Honduras, and Nicaragua.

The shop will also stock ashtrays, personal humidors, lighters and cutters, and handmade pipes from Alan Brothers Supply Co. Future plans include installing an exhaust system for customers to enjoy their purchases onsite. 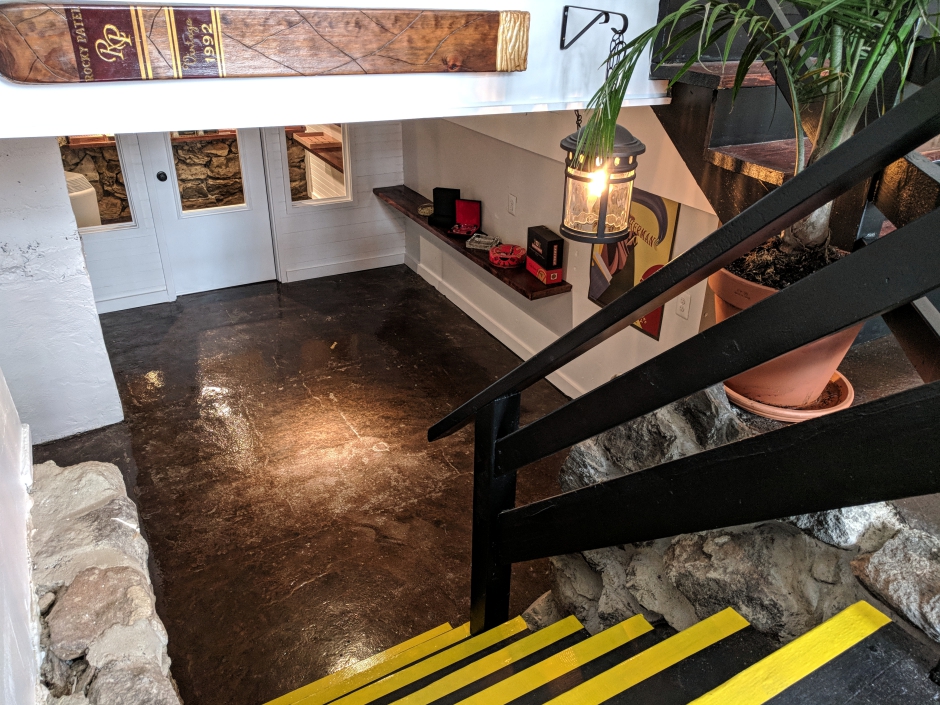 The walk-in humidor in the Ends of the Earth cigar shop reveals a secondary purpose to the historic Gibbs Tavern basement. Credit: Matt Skoufalos.

Inside, the split-level storefront is light and bright; white-walled with dark wood, and Latin music.

On a summer weekend, guests might enjoy a Cuban coffee with a hand-rolled cigar.

Just stepping inside from Mechanic Street offers the experience of being transported to a different time and place.

“It really does feel like you’re stepping away from the ordinary and the expected,” Maria Gorshin said.

“You feel like you’re maybe in Ybor City in Tampa, or somewhere in Miami.”

The shop is nestled in what was originally a three-level horse barn in the historic Gibbs Tavern building. On its lower level, situated within the exposed foundation of the building, the Gorshins constructed a walk-in humidor made from shiplap wood and custom shelving.

“To honor what that room was originally used for, it’s not right to bring in just cabinetry and your typical humidors, but to actually utilize the stonework of the building to help keep a cool, properly humidified space,” Mitch Gorshin said. 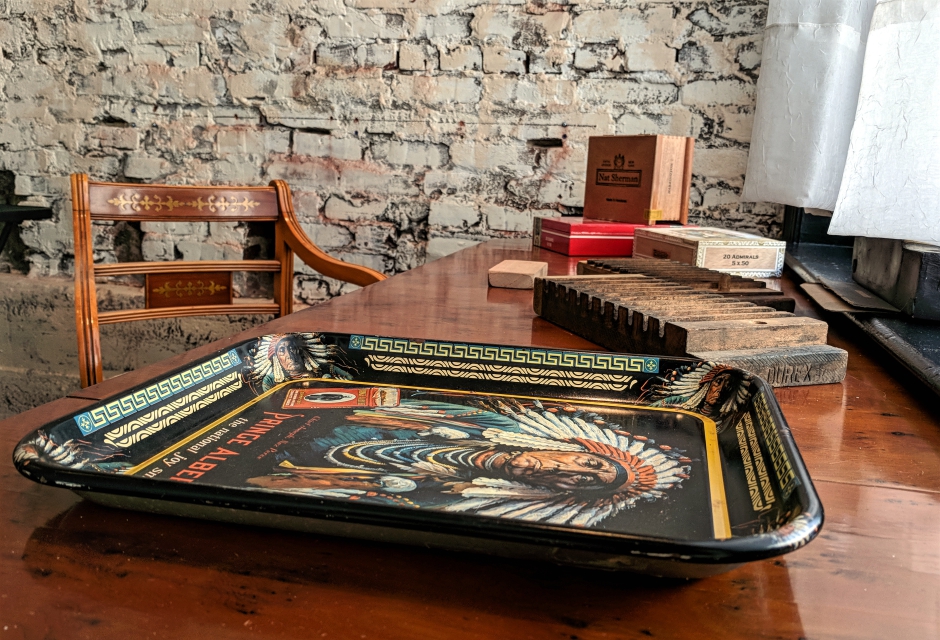 The Gorshins have outfitted Ends of the Earth with appropriate details like this cigar rolling station. Credit: Matt Skoufalos.

Just as in the Trading Post, the Gorshins also plan to cultivate unique activities and pop-up events at Ends of the Earth.

Maria Gorshin has organized nature hikes from the Trading Post, which has become a staging point for events from pop-up cocktail evenings to storytelling circles.

It all goes to the couple’s idea of redefining community gathering through commercial spaces.

“By bringing the cigar shop here, I feel like we’re bringing an element of something social,” Maria Gorshin said.

“The downtown is supposed to be a place where people congregate,” Mitch Gorshin said. “Outdoor adventure, some world traveling, have a cigar—everything is kind of a soft platform to congregate.

“It’s an idyllic building to contain something as thematically correct for this town as having a great tobacco shop,” he said. “It just fits.

“It’s a small place, very humble on the inside, but it’s also got a certain amount of fidelity to it.”

Ends of the Earth is a companion business to Gorshin Trading Post. Hours are 11 a.m. to 7 p.m. weekdays, with weekend hours to come in summer 2018. For details, visit gorshin.com.