Trending
You are at:Home»Business»Growth, Expansion, and Sustainability as Revolution Coffee Roasters Approaches Year 10 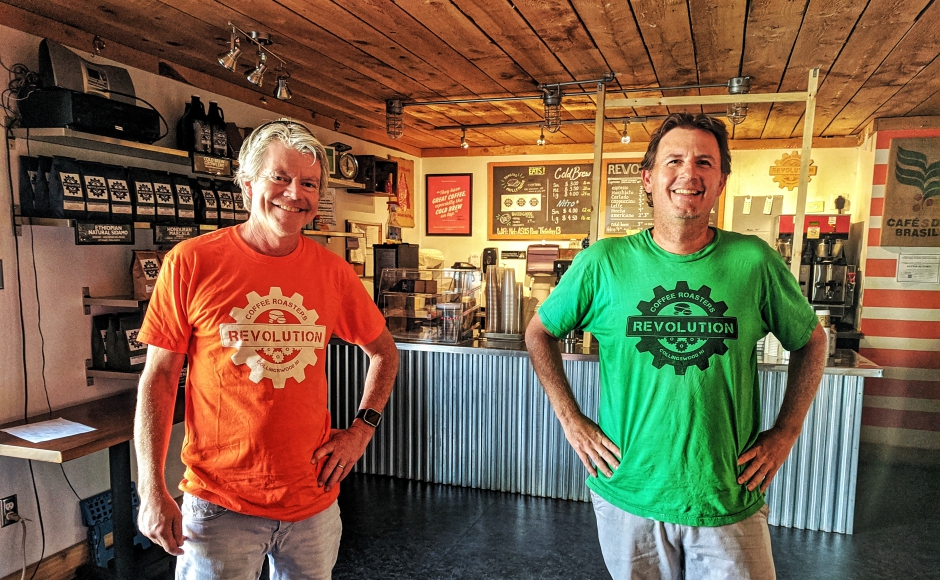 Nine years ago, Revolution Coffee Roasters was a fledgling, third-wave coffee start-up, the dream of a few friends who plunged into business together in the back of a repurposed theater.

Now, with an eye on double-digit years in operation, the company is poised for another scale-up in growth the likes of which its partners could only have imagined in those modest, early days.

Despite moving to a Haddon Avenue double storefront in the fall of 2020, co-owner Steve McFadden said the business was bursting at the seams by the following spring.

“We were misusing half of our café space in Collingswood for production,” McFadden said. “We couldn’t squeeze an ounce more of capacity out of Collingswood, and we had to forego pursuing any new wholesale clients.”

During the diminished occupancies of the novel coronavirus (COVID-19) pandemic, a smaller café entrance with limited seating suited the business fine. However, as restrictions relaxed and operations returned to normal, “we were just getting by with everything,” said Revolution co-owner Justin Ettore.

“We weren’t at a roadblock yet, but we saw it coming,” he said.

So by the fall of 2021, Revolution added a warehouse space in the Airport Industrial Park in Pennsauken, and moved its roasting and cold brew operations there in spring 2022.

Befitting the new space, the company also scaled up its production infrastructure, acquiring a 30-kilogram Ambex coffee roaster capable of producing 35 to 50 pounds of finished coffee every 15 minutes. 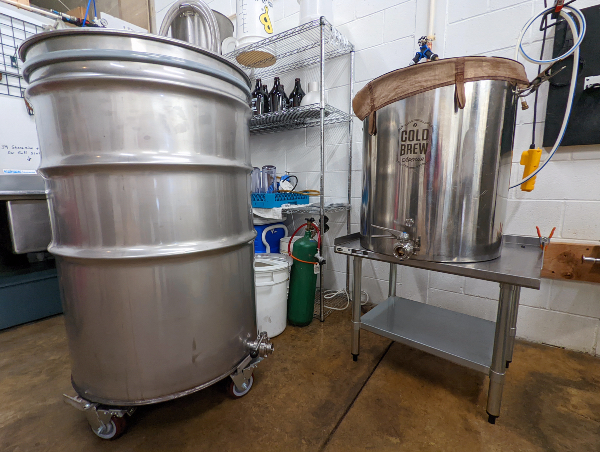 The added capacity also enabled Revolution to increase its production of its cold brew coffee, the company’s top-volume brewed product.

Ramping up its output also meant the business faced increased challenges to manage the waste created by roasting three times as much coffee.

“In most cases, sustainability initiatives equal profitability and waste elimination,” McFadden said. “We’ve asked Suzy to evaluate pretty much every aspect of our operation, wholesale and retail, and what we can implement, we’re going to implement immediately.

“We’ve also asked her to give us recommendations on things that aren’t easy or practical to implement now,” he said. “Once they become practical, we want to execute best practices across the board.”

Cook said she’s helping the company examine every aspect of operations, from its supply chain to its café. Some changes will be more visible to customers, like making plastic straws available only by request, reducing single-serve waste, or streamlining recycling in the shop.

One of the biggest back-end tasks to tackle, however, involves finding creative reuses for the appropriate disposal of spent coffee grounds. 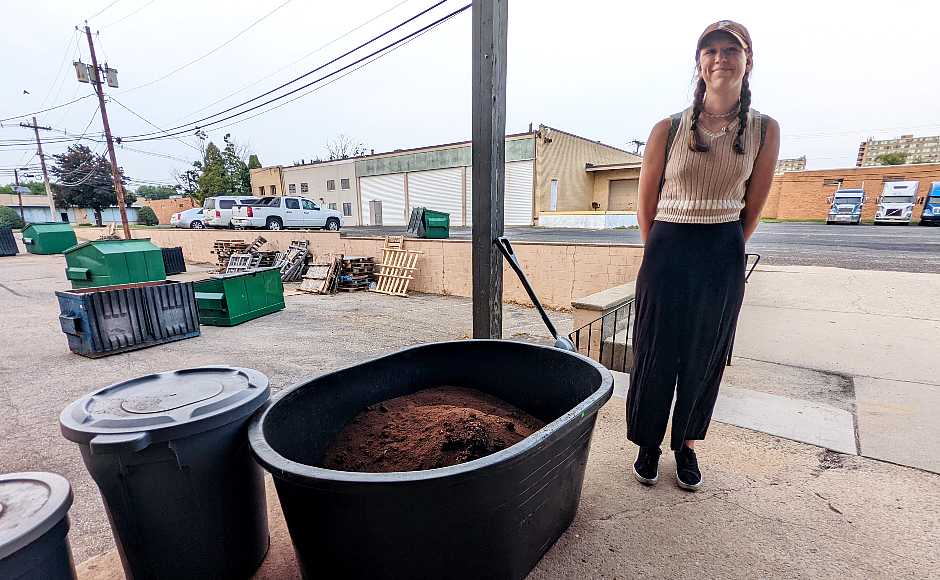 “There’s all this organic material that you don’t really want in the landfill,” Cook said.

“There’s tons of uses in terms of composting or fertilizer, but because it’s larger-scale, I’m talking to people like community gardens and urban farmers; people who can take more of it.”

And then there’s an even bigger challenge to the assumptions that underlie the business: the impact of climate change on coffee, a commodity agricultural good farmed largely in equatorial conditions and requiring complex logistical operations to transport across the globe.

Pricing changes daily, and roasters who buy green products from importers must project out their costs half a year in advance.

“Coffee is sourced from around the world, but within the storefront, everything else that can be sourced as locally as possible is,” Cook said.

“It’s not just crossing things off a list,” Cook said. “You have to figure out what’s most realistic and most attainable, and never really consider the work done.”

Participating in this kind of business analysis early in her sustainability education is an opportunity for Cook to field-test the principles that emerge from the classroom. She’s encouraged that her findings will be put to use by a local small business, and not merely as a thought exercise.

“I think it’s important that it’s really a genuine effort,” Cook said. “Greenwashing is something I really didn’t want to do. I could tell that Steve really wanted to make impactful changes, not just for the sake of marketing, but to use your company as a way to put [sustainability] forward.”

Ettore and McFadden also believe they’re poised for future growth with the addition of their third operating partner, Anastasia Altomari, in 2021. Altomari, who works full-time in the financial industry, is a statistician by background, and applies her understanding to the quality assurance processes of the business. 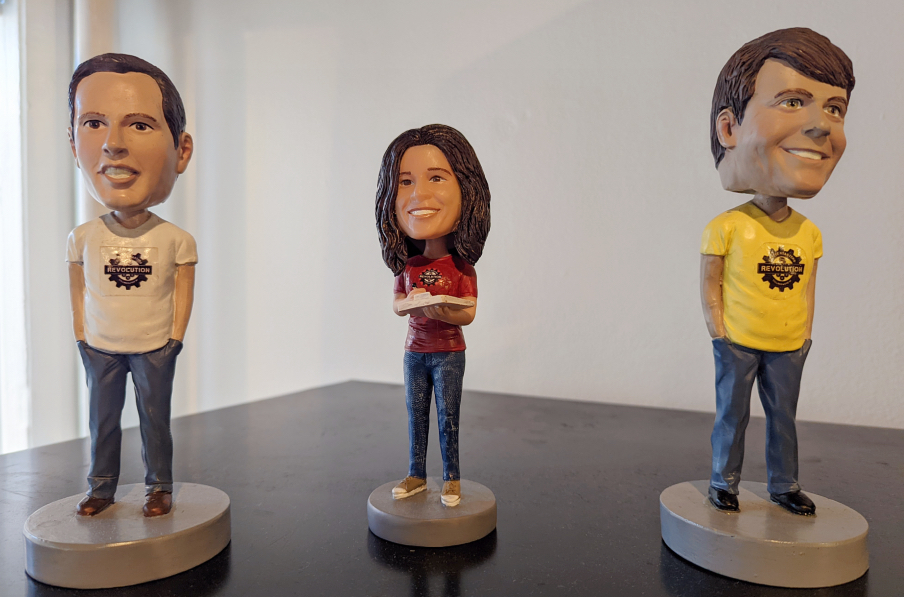 “She came in years ago wanting to learn how to roast coffee, and as she learned our processes, was able to really fine-tune our quality control and our consistency,” McFadden said.

“I’ve always felt that we’ve had a really good product; with her addition to the team, we have a really great and consistent product,” he said.

“Most roasters our size really rely heavily on sensory input as opposed to actual math and science,” McFadden said.

“The problem with sensory input is that it’s very subjective, especially when you have several people throughout the organization actually roasting coffee.

“When you add things like time and temperature into the equation and duplicate them, we become much more of a roaster that is still hands-on craft roasting, but applying Henry Ford production techniques into establishing a consistent product,” he said.

By relocating roasting and production operations to its Pennsauken warehouse, the Collingswood café has been reconfigured, doubling customer seating capacity, offering greater presentation of product and the chance to build in a second register for times of high volume.

Down the line, Ettore said the extra café space could be leveraged to offer some quick-prep food items and scale up its slate of offerings. The success of the shop itself also complements the growth of the Revolution wholesale business, as customers can appreciate its owners’ insights into both aspects of the business. 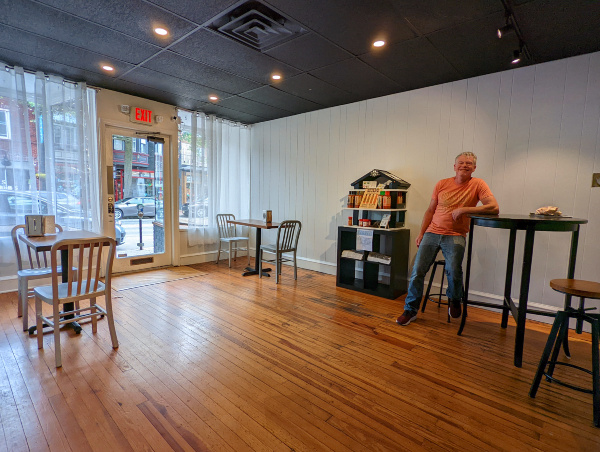 “We end up winning over a lot of wholesale accounts with the customer service side of things,” Ettore said.

“If people have questions about running a café, we’re not here just to sell you coffee.

For McFadden, the capacity build-out reflects the growth Revolution has enjoyed in the past nine years as much as it offers a glimpse into what may yet come in Year 10.

“It’s always been a slow arc, and not some sort of meteoric rise, and that’s worked for us,” he said.

“We’ve been able to maintain the quality, maintain a welcoming and inviting environment in our retail location, and not get out ahead of ourselves and trip over our own feet.

“If the next 10 years look like the first, I think we’re destined for making a real impact; becoming a real significant regional roaster,” McFadden said.