Trending
You are at:Home»Government»Haddon Heights Swears in Bruce Koch as Police Chief, Michael Scardino as Captain

The veteran officers took their oaths of office before a packed room of friends and neighbors. 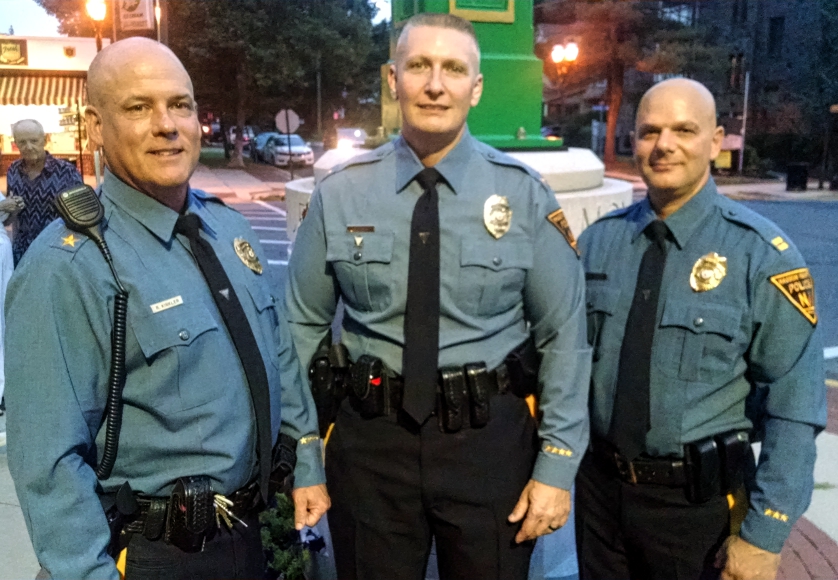 When Richard Kinkler reflected on his retirement, the outgoing Haddon Heights police chief remarked that his departure would give five other officers in the department an opportunity for advancement.

At Tuesday night’s meeting of the borough council, two of them were the immediate beneficiaries of that opportunity: Bruce Koch, who was named Kinkler’s successor as chief, and Michael Scardino, who took over as captain.

Their appointments were met with a rousing cheer from a packed meeting room at the borough hall, but not before the crowd had given a standing ovation to Kinkler for his service. Council President Kathy Lange and Councilwoman Susan Griffith also formally acknowledged the outgoing chief with a proclamation.

“It’s been a great pleasure to work with you as [public safety] director,” Griffith said. “We see a lot of great things happening. You made it happen. I want to congratulate you on a really fine job that you’ve done with the department.”

“I know you were looking forward to this day, but we were not,” Lange said.

Haddon Heights gathers for the swearing-in ceremony of its new chief and captain. Credit: Matt Skoufalos.

After acknowledging the crowd, Kinkler introduced Koch, praising his work ethic and dedication to community.

“I can’t think of a more deserving guy to get the job,” Kinkler said.

“You seek out those guys who help you out a lot,” he said. “Bruce by far was that guy.”

Koch took his oath of office, thanking his family, friends, colleagues, and the mayor and council for their support.

“Without you guys, we can’t fulfill the mission,” he said. “You guys give us more support than we could ever imagine.”

Introducing Scardino, Koch described his new captain as “one of the hardest-working guys in the department” and a mentor to his junior colleagues. 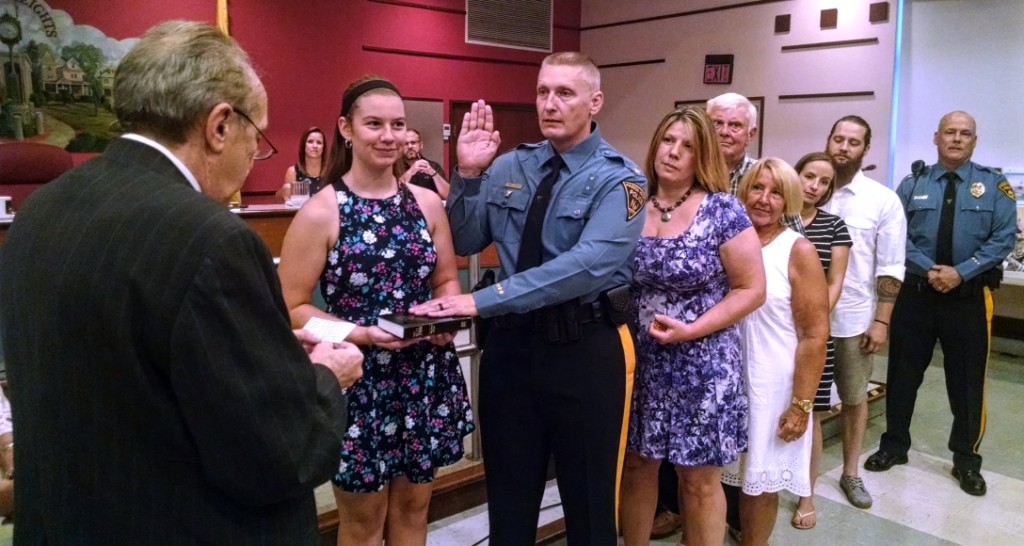 “He makes sure that all the new officers are doing the job they’re supposed to do,” Koch said.

“I know he’s going to be great as the captain of police, and I look forward to working with him for the next several years.”

After thanking his wife and family, Scardino lived up to Koch’s words, turning his remarks to the packed meeting room.

“There’s a lot of guys here tonight that I started with,” he said. “You know who you are. I wouldn’t be here without you. I love you. Thank you very much.”

“Your heart’s always been with this community and the people of this community,” Griffith told Scardino. “I look forward to working with you as well. Good luck, and God bless.”

The council also swore in Mario Scullan as its fire official and Joseph Hales as fire inspector. Fire Chief Nicholas Scardino—Michael Scardino’s older brother—thanked them “for stepping up to the challenge” of a job he described as going “unnoticed and un-thanked” despite its importance. 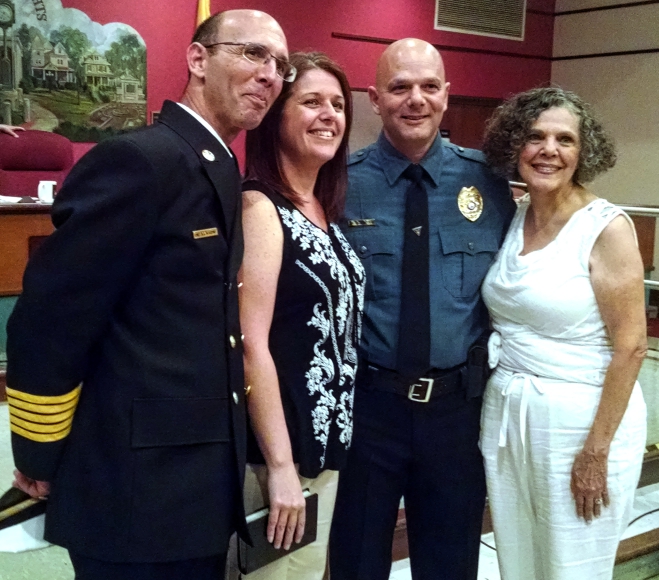 “The two men that were just sworn in tonight have the integrity and the competency to do the job well,” he said.

“I look forward to working with them for years to come.”

After the meeting, Koch said his goal is “to continue the good work Chief Kinkler has done as chief of police and continue to move the department in the right direction.”

Michael Scardino described himself as “a hometown kid.”

Born and raised in Haddon Heights, he said it had always been a goal to work in the borough since he began with the department as a patrolman in 2004 on a DMV grant.

“I want to continue to lead this department,” he said. “It’s a small town but we’re big on professionalism.”

Kinkler said both men are “very deserving” of the promotions, and expressed his “utmost confidence in their leadership.

“This department won’t miss a step,” he said.