Trending
You are at:Home»Government»Haddon Twp. Board Approves ‘Roadmap to Settlement’ in Fair Share Litigation

A prelude to the Haddon Towne Center redevelopment project would settle an affordable housing lawsuit, but solicitors cautioned of ‘multiple points of failure’ in the deal.

After a 90-minute, closed-door executive session, the Haddon Township Zoning and Planning Board voted Thursday to approve the framework of an agreement to settle a lawsuit over the future of the Haddon Towne Center development.

Although board counselor Donald Cofsky downplayed the move as not “a done deal,” the near-unanimous vote approved “a roadmap for the settlement” of litigation among Fair Share Housing of Cherry Hill, developers Fieldstone Associates, and the township, said solicitor Stuart Platt.

Platt also cautioned that the entire case could very easily return to court if the agreement isn’t a win for all three parties.

“If the process fails at any point, if any condition [of the agreement]fails, the settlement agreement terminates, we return to court, and we continue with litigation,” Platt said.

If carried out, the agreement would modify the approved site plan for the Haddon Towne Center project in a number of meaningful ways, ostensibly offering givebacks for all parties involved.

For Fieldstone, the benefits include a chance to improve the profitability of the project by adding a more dense construction. The revised agreement allows for 252 onsite rental units instead of the originally approved 201 condominium, town home, and rental units.

For Fair Share Housing, 25 of those onsite units will be dedicated for affordable housing, and will be built at the developer’s cost. Fair Share Housing also won contingencies on additional affordable units to be built elsewhere in Haddon Township if court rulings further obligate the township to build them.

(After the New Jersey Supreme Court stripped COAH of its ability to rule on affordable housing obligations, communities must now participate in a case-by-case examination of their inventory. Haddon Township is also party to a companion case seeking a declaratory judgment on its third-round COAH obligation, Cofsky said.)

For Haddon Township, the project will return to being a mixed-use development that includes 12,500 square-feet of retail instead of the 24,000 allocated in the original, approved site plan (or none in the revisions proposed by Fieldstone in 2014).

Elevation on seven of the buildings would be six feet higher to accommodate “under-structure parking,” Cofsky said, “so that Haddon Avenue would not be burdened and you wouldn’t just have tons of surface on this development.” The original, approved site plan requires Fieldstone to build a parking garage onsite.

Haddon Township commissioners have already ratified the settlement agreement, Platt indicated, and final approval or rejection of the endorsement put forth by the zoning and planning board lies with the commissioners’ alone.

“This proposal was put forth by Fieldstone to attempt to resolve the litigation,” he said. “We insisted upon this process that began with the commissioners endorsing the process. This is the second leg of that process because the planning board is a party to the litigation.”

By approving the agreement, the board will now review proposed modifications to the redevelopment plan, including its overall concept, housing numbers, and architectural design, “and make a recommendation to the commissioners as to whether the redevelopment plan should be amended,” Cofsky said.

“If the commissioners determine that the plan should be amended, the builder would have to return to present its major site plan application,” he said.

Platt emphasized that the agreement offers multiple points of public engagement, including:

The agreement could fail for any number of reasons, both lawyers said, including if the commissioners don’t adopt an amended redevelopment plan, or if the Fieldstone site plan doesn’t meet the conditions of that revised plan, to name just two.

The agreement can’t simply be settled before a judge, Platt said, because “we have to allow for public participation throughout the process.”

“All we’re doing is binding the public entities to a process,” Cofsky said.

However, the draft of the agreement presented to the board lacked a number of meaningful details on the redevelopment plan, including information about revisions to a PILOT agreement, among other things. For board member Nicholas Mink, the lone dissenter in the vote, the lack of specificity in the presentation was troubling.

“I’m not comfortable with this vote as it’s proposed to us,” Mink said at the meeting. “It came up quickly. I don’t know how we as a board can make a solid decision as to something [for which]we don’t have all the documentation.”

Mink clarified later that he believes the plan is “moving in the right direction,” but was critical of the process. That such a substantive change should be made to the meeting agenda as late as 11:30 a.m. on the day of the meeting, troubled him, as did its absence of “all the documentation to really make a thorough, fully vetted decision.”

Even as late as 7 p.m. on Thursday, the Haddon Township municipal website did not provide a version of the board agenda that included the proposed settlement agreement. Cofsky pointed out that a physical copy of the revised agenda had been pinned to the bulletin board in the municipal building. 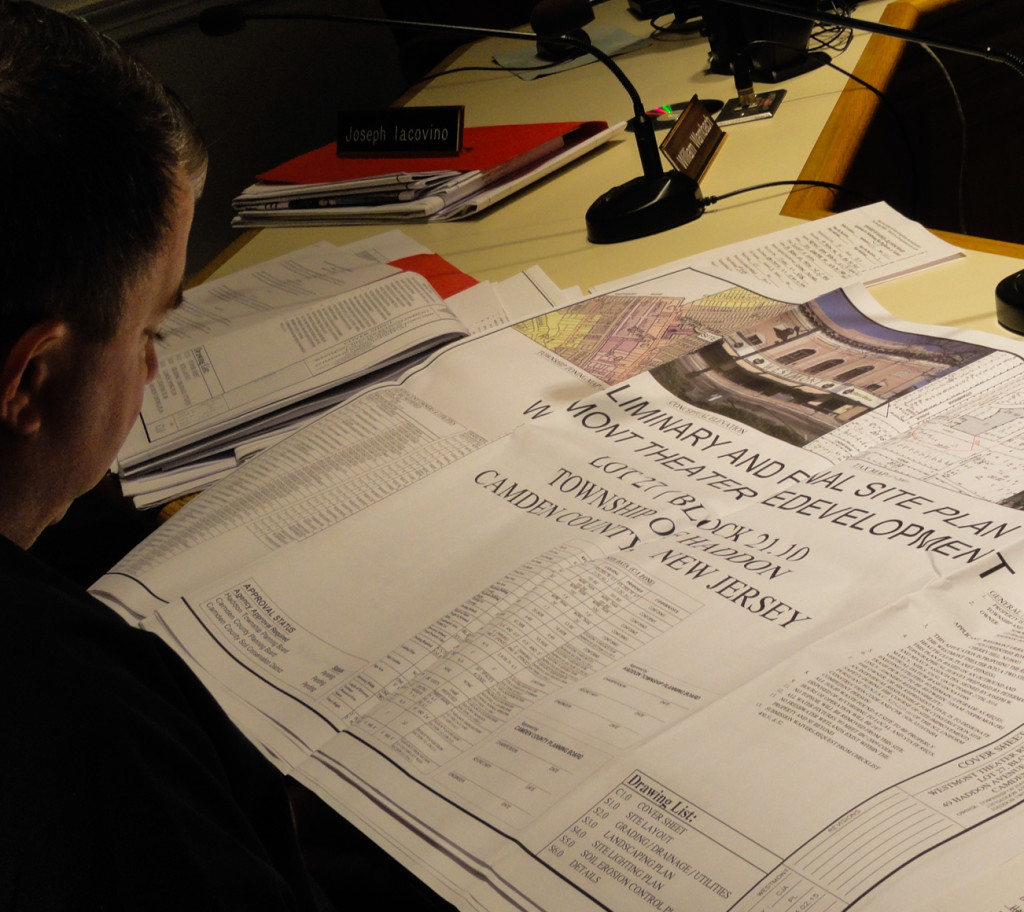 “It was just disappointing to be a public servant on a board like that, and at the last minute, it’s almost like they’re sneaking things on the agenda,” Mink said.

“That was the most uncomfortable part of the process tonight.

“On the planning board, we’re the gatekeepers of the town, and we had an obligation to affect this a little more than we did,” he said.

“I’m disappointed that this came together so quickly and was so poorly advertised that the public didn’t really have an opportunity to learn or to know about this.”

Mink also pointed out that by allowing Fieldstone to set the conditions of the revisions—again—“the board was handcuffed” in the process. If the board or the commissioners recommend any change to the terms of the agreement, the entire bargain could be kicked back into litigation.

“If Fieldstone doesn’t want 251 units, the deal’s off the table,” Mink offered as an example. “Why would they ever give up something they have?”