Trending
You are at:Home»Schools»Haddon Township»Haddon Twp. Superintendent: ‘No Dessert’ in $40M School Projects

Nancy Ward said the project, which will be 40 percent funded by state aid, is ‘meat and potatoes’ for the aging district infrastructure.

It’s an innocuous scheduling detail that is otherwise complicated, said Superintendent Nancy Ward, because the indoor sessions are held in the only room in the building big enough to accommodate them—the cafeteria.

“When they need it for indoor phys ed, all the tables are moved into the principal’s office,” Ward said.

“When they need it for lunch, they move out all the phys ed equipment into the principal’s office and the hallways.”

If a child falls ill during the school day at Strawbridge, it’s a three-story walk up to the nurse’s office, which Ward described as “a cubby.

“She has no place for a child to lie down if a child is sick,” Ward said.

When those same students have a promotion ceremony, recital, or assembly, the room is full to bursting with “mom, dad, uncle, grandpop,” Ward, said, because “these families support their kids.” 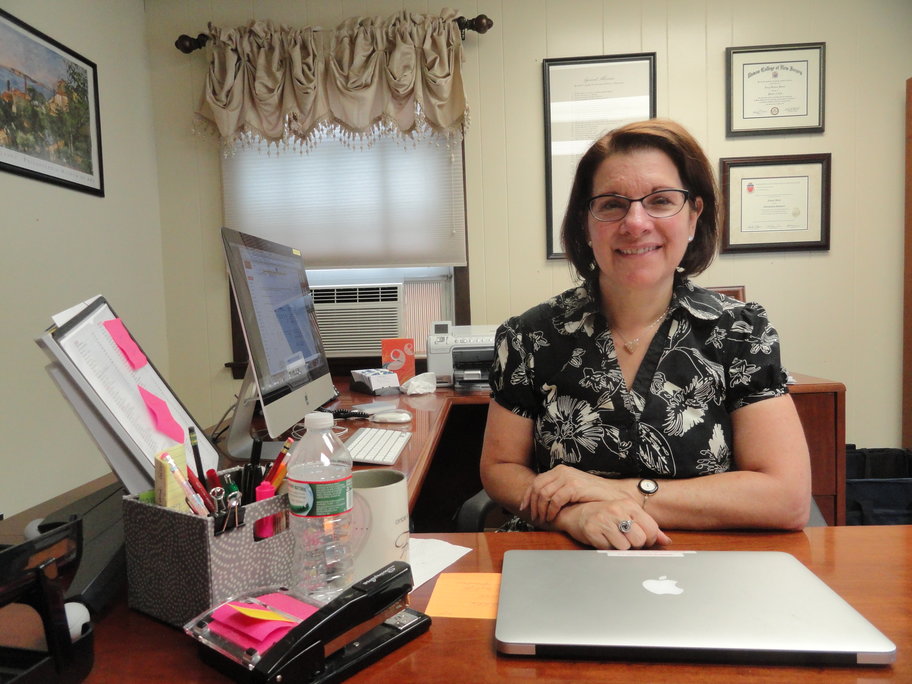 At the James Stoy, Thomas Edison, and Van Sciver elementary schools, the offices “aren’t close enough to the front of the building” to control the flow of visitors in an optimally secure fashion, Ward said.

That’s discounting the fact that three of the five neighborhood K-5 schools in the district were built in the 1920s, and two of those haven’t been renovated since 1955.

All of which speaks to the need for some $40.1 million in infrastructure improvements in the district, on which township residents will vote in a special election September 30.

A referendum on the issue will appear as two questions on the ballot, per the results of a 5-3 board of education vote at a special July 24 meeting.

If approved, the work—detailed in depth in a presentation provided by the school district—would add an estimated $274 in taxes annually for a home assessed at the township average of $223,984.

Voters will decide in a separate question whether to tack on an additional $46 per year to that total if they authorize another $4.543 million in improvements to the high school athletic complex. Both would be levied over a 30-year term.

If residents vote the project down, the board could add the question to the Election Day ballot (November 4), and potentially again in December, January, or March. The cost to hold each election is “more than a couple thousand [dollars],” Ward said, and the board would have to approve each subsequent referendum by a majority vote.

If the district is unable to secure funding for the project by March 2015, the funds will be redistributed to other grant applicants, Ward said.

The project gains multiple efficiencies if it passes on the first vote, Ward said.

For starters, the timeline “works out much better” if it is begun in early 2015, Ward said, allowing for the bulk of the work to be completed during that summer, when classes are not in session, and completed in the summer of 2016.

Another advantage, she said, is that “money is cheaper now.” The figures quoted in the project are conservatively high, Ward said, projected at a 4.5-percent interest rate. 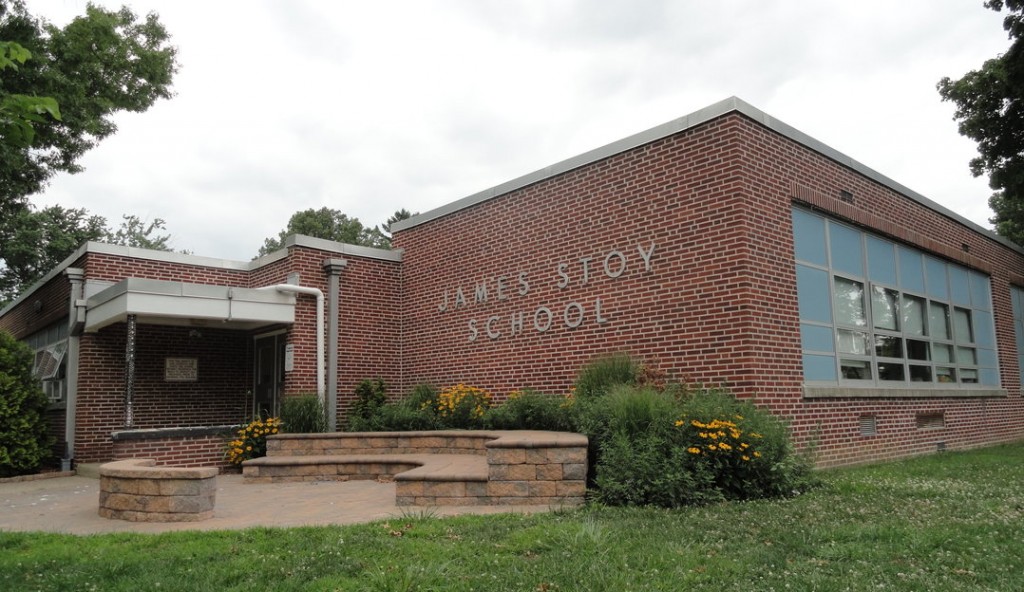 James Stoy School, built in 1928 and last renovated in 1955, is one of the oldest buildings in the Haddon Township school district, and is in need of improvements, said Superintendent Nancy Ward. Credit: Matt Skoufalos.

‘We’ve needed to do these projects for years’

Ward described public sentiment around the project as “chiefly positive,” based on a summer’s worth of information sessions held at elementary schools throughout the district.

Ward said she’d heard from fixed-income seniors concerned about the tax impact of the project, but added that those who have been “in some way affiliated with the school” support the initiative.

Relatively speaking, so are the state aid dollars that will fund 40 percent of the project.

The funds were made available in three stages under the Corzine administration, Ward said. The final round, under which the Haddon Township application was approved, has been withheld since 2009; a victim of billion-dollar state cuts to school funding under Governor Chris Christie.

When those cuts came down, Haddon Township lost about 6 percent of its budget from 2009 to 2013, a difference of more than a half-million dollars, according to NJ Spotlight. That meant layoffs numbering “in the twenties,” Ward said, of custodial staff, support workers, and teachers.

“In 2010, this district took a tremendous hit, and basically went down to bare bones,” she said, “and so we’ve been rebuilding since then.”

In the meantime, Ward said, Haddon Township schools have been “sitting on the brink.

“We’ve needed to do these projects for a number of years…and we’re doing it with 40 percent [state]funding,” she said.

“This is meat and potatoes. This is no dessert.”

In the absence of a retail shopping district, Ward said she believes the school district “is the hub of this community,” and its athletic facility is “a tired facility.”

“Everything has a life,” she said.

“The track needs to be replaced. The seating…has ADA accessibility issues. Our concession stands and our bathrooms are in terrible condition, and our PTA makes their money from this.

“Because we are a wonderful school district and a wonderful community, we’ve been making do on a lot of the volunteerism and a lot of dedicated people,” Ward said. “I think it’s time to give something back to these people.”

The addition of a turf field would alleviate issues of grass recovery and allow for its use by multiple sports, Ward said. With the replacement of the track, the stadium could host meets and tournaments, and possibly even generate some additional revenues as a result.

“If we’re going out for voter support for these other projects, are the voters interested in the kinds of things you can do with a stadium?”

Superintendent Nancy Ward said that the district hasn’t yet crunched the numbers on how many students the The Towne Center at Haddon could add to the district, but that Edison and Stoy elementary schools would likely be affected by that project and the Albertson Village redevelopment. Credit: Delware Valley Smart Growth Alliance.

Another consideration for the aging school infrastructure is the impact of additional students in the district. Some of these will come from the new redevelopment projects in town, such as the Albertson Village and Haddon Town Center.**

Ward said both projects could add more students to the district, according to calculations from a demographer employed by Garrison Architects, which drafted the school construction plans.

Exactly how great or small that number is, she couldn’t say. Projections for both developments would be contingent on the number of affordable housing units in each, Ward said, and the board is awaiting the results of a pending lawsuit over the Town Center before it can perform those calculations.

She did say that “low-income families [typically]do bring more children to the schools.”

“What will happen, too, is that the current boundaries in our neighborhood schools will very likely have to change,” Ward said.

Ward believes that the referendum is more than an investment in the current student population. She said that the voting community comprises a significant percentage of Haddon Township High School graduates who “sustain this town in a lot of ways.

“You want to live in a town that provides a premier education for your kids because your property values sustain and go up if you live in that town,” Ward said.

“[Those] kids come back and live in Haddon Township.” 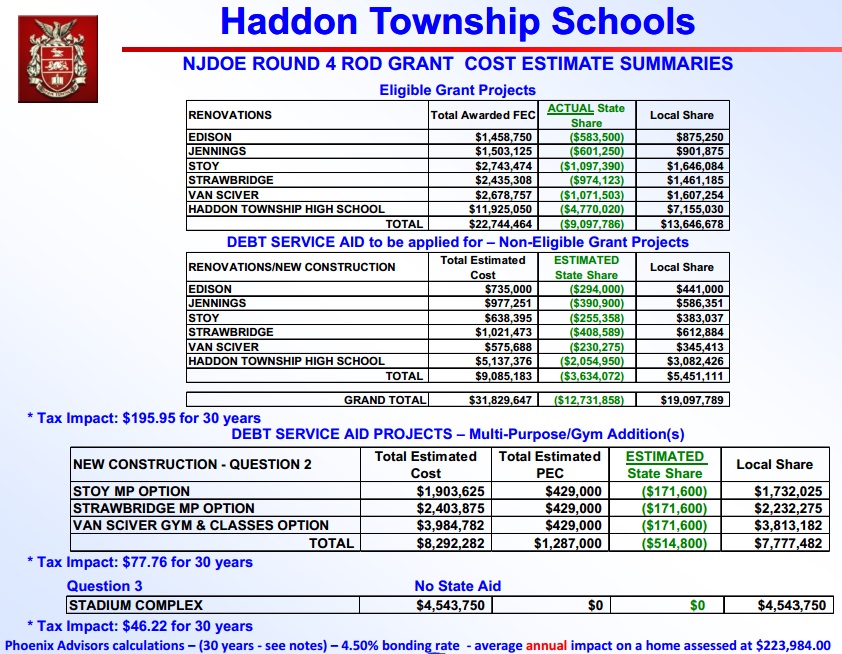 Estimated figures provided by the Haddon Township school district on the $40 million improvements to its facilities. 40 percent of the cost (highlighted in green) would be deferred by state aid. Those items market ‘grant projects’ and ‘debt service aid projects’ will appear on the ballot as one question, as per the board’s July 24 vote. Credit: Haddon Township Schools.

**CORRECTION: An earlier draft of this story reported that 200 children could be added to the Haddon Township school district from the Albertson Village apartments. School superintendent Nancy Ward related that that figure was based on old calculations and had been intended to cover both the Albertson Village and Haddon Town Center projects. As the number of affordable housing units to be made available in both has yet to be determined, the board of education is awaiting updated numbers before it can redraft an impact study. –ed.