Trending
You are at:Home»Government»Haddon Twp. Zoning Board Agrees to Dy-Dee Site Plan Changes

The tallest buildings in the proposed, 252-unit town center project will now approach 60 feet, with parking beneath. 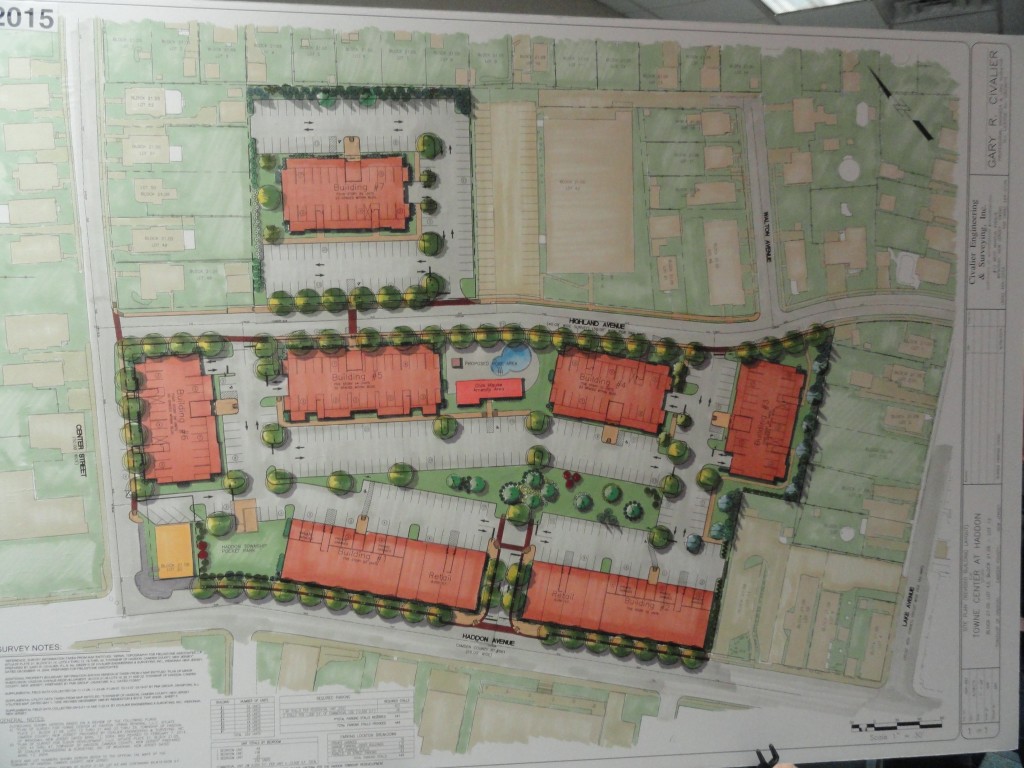 Amid 12 years of litigation, the Dy-Dee redevelopment project took another lumbering step forward, as the Haddon Township Planning and Zoning Board signed off on a number of significant changes for the facility.

At its June meeting, the board had previously agreed to proceed along “a roadmap to settlement” that would revise the requirements associated with the redevelopment project while resolving a lawsuit among the township, project developers Fieldstone Associates, and Fair Share Housing Center of Cherry Hill.

On Thursday, the board agreed to a revised plan that would increase the density of the $50-million project, reducing the overall footprint of the seven buildings in the plan while adding more units within them, and raising five of the buildings to accommodate parking beneath. The project retains 12,500 square-feet of commercial space.

“I have to say, frankly, at this point, all of the participants in the litigation are just tired,” said Fieldstone attorney Richard Goldman. “Fieldstone has hung in there for all these years. They’ve continued to invest in lawyers and litigation. They want to get this project done.”

The most significant changes to the proposal involve raising the maximum elevation of the tallest buildings from four to five stories, at a maximum height of 58 feet, in order to accommodate that parking.

The density of the project will increase from 227 residential apartment units to 252, adding in 25 affordable housing units to satisfy conditions of the litigation from Fair Share Housing.

Adding the extra units improved the economics of the deal, but encumbered it in terms of parking provisions. The existing township ordinance would have required 3.5 spaces per 1,000 square-feet for the commercial space. The board on Thursday revised that recommendation to 3 parking spaces per 1,000 commercial square-feet and reduced the parking obligation to 1.7 spaces per residential unit to afford the builders additional flexibility in the design.

“This is essentially a transit-oriented, mixed-use set of buildings,” Goldman said. “One of the great benefits for that is a reduced need for cars and a capacity for shared parking. During the day, when the retail needs the parking spaces, most of the residents are out.”

The developer also “has options” to alleviate parking concerns onsite, Fieldstone Principal Arthur Corsini said, from local public transit services to the potential addition of a Zip Car service, or the use of shared parking at adjacent nearby lots. Corsini also mentioned the possibility of lease-restricting parking spaces by the number of bedrooms per apartment (one space for one-bedroom units, and two for two- and three-bedroom units.) 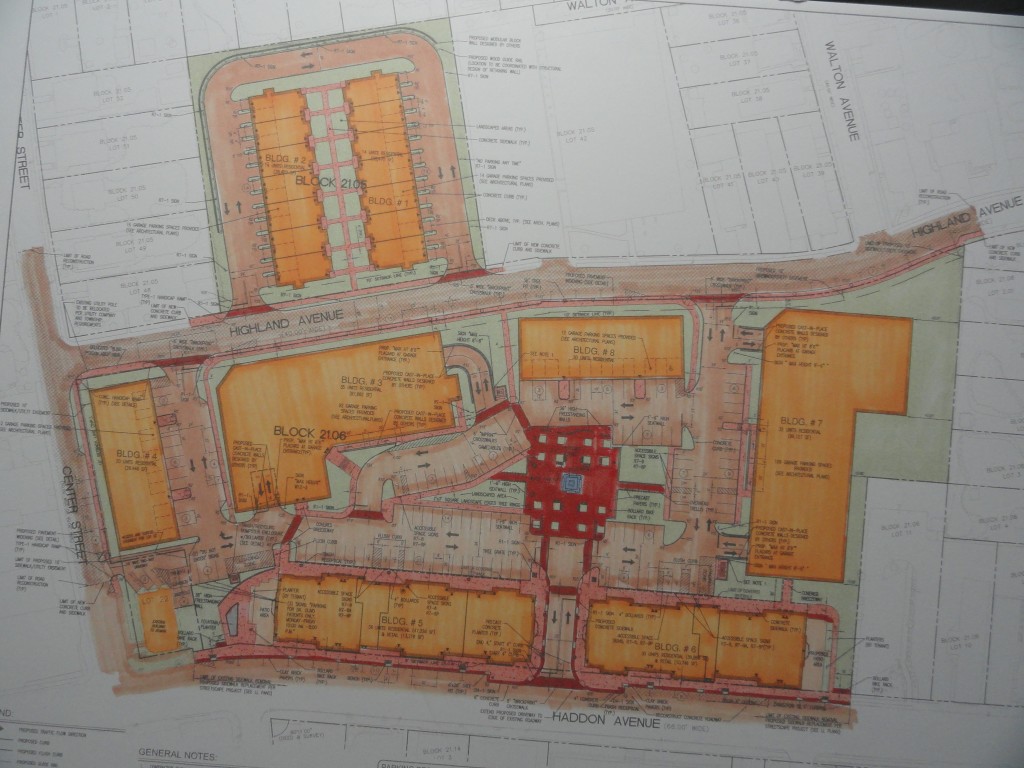 Parking and traffic expert David Shropshire testified that 1.8 parking spaces per unit is “reasonable if not high.”

Despite the novelty of transit-oriented development communities, studies of such projects in northern New Jersey showed a parking demand more on the order of 1.3 spaces per unit, Shropshire said.

“I know that we’re looking at a 1.8 supply ratio for the units as it’s presently presented,” he said.

“I feel more than comfortable recommending to the board that a ratio of 1.5 is going to cover peak demand for this facility.”

That math equates to 492 total recommended parking spaces, with 449 accounted for onsite; the remainder would be fulfilled by an additional 19 spaces on Haddon Avenue and others along Center and Highland Avenues. Offsite parking by Glenwood Avenue could add 33 spaces through re-striping and re-aligning parking spaces, Fieldstone engineer Gary Civalier said.

“When we designed this project, we hoped to get to 1.8 [spaces per unit], but that’s different from what this ordinance standard requires,” Goldman said. “I think what we are suggesting is a little bit of relief in the ordinance standard, even though we want to design to a higher standard, if possible.”

The amended plan also includes a five-percent increase in open space (up from 19 to 24 percent) with a pocket park as well as a larger interior park that could include a memorial to local military veterans, Civalier suggested. The revision also includes a resort-style pool and patio adjacent to Highland Avenue and buffered to that street via masonry walls and landscaping.

Architect Victor Barr described how the revised proposal further reduces the scale of the perimeter buildings to three stories over dedicated parking “so as to transition into the residential neighborhoods around the site.” 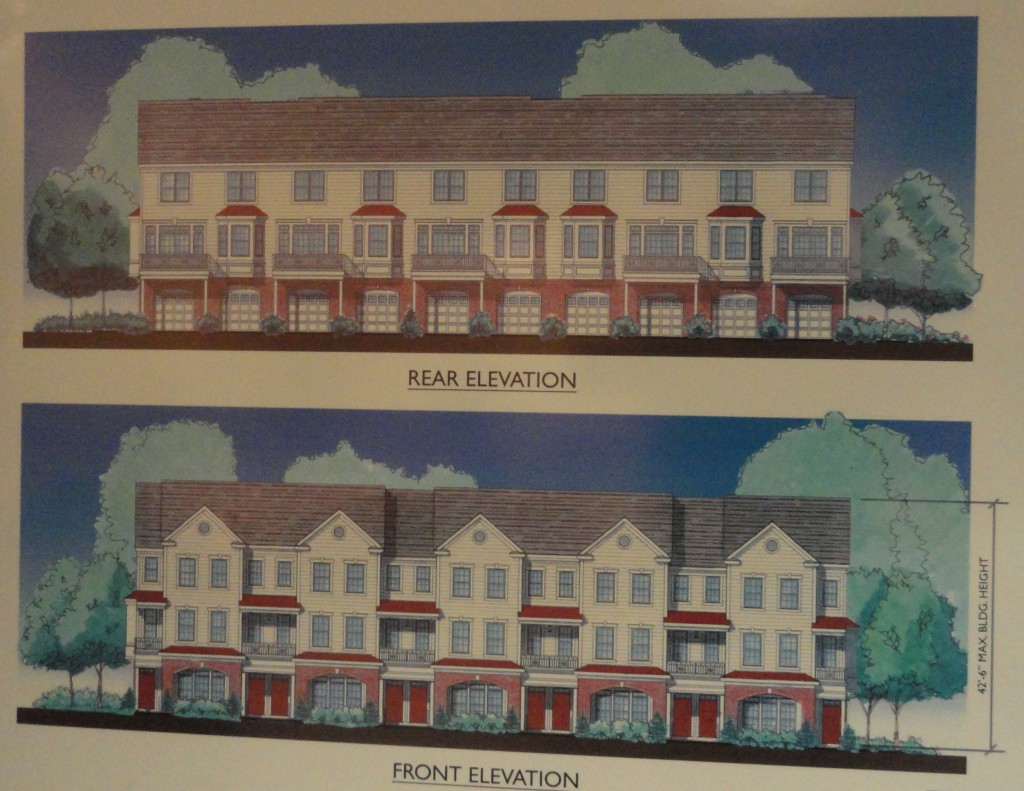 Feedback from Haddon Township residents was mixed. In comparing the 0.6-acre Dy-Dee site with the six-acre planned development, Highland Avenue resident John Smith called the size of the project “outrageous.

“It just keeps getting bigger and bigger,” he said. “Highland Avenue won’t see sun after 2:00 in the afternoon. What do you think it’s going to be like in the winter? The snow’s never going to melt.”

Smith further decried the parking impact of the proposal, arguing that its intended use of neighborhood side streets for overflow parking leaves no place for patrons of existing businesses, including the Starting Point and Treno, to park.

“Parking’s a major issue in this town, and we all know it,” Smith said. “They’re going to be cutting through all the neighborhoods.

“You people have put a lot of time in the original agreement, and all that just went out the window,” he said.

Locust Avenue resident Jason Miller asked the board to consider the placement of public space in the design of the facility. He argued that situating a centralized park in the middle of the plan “isn’t that useful.

Miller also worried that the proposal submitted to the board doesn’t offer enough visual interest in comparison with the plan submitted in 2008.

“You’d be surprised how much people are willing to walk, and how much they enjoy it, if what they’re walking past is nice to look at and not redundant,” he said, fearing for “long, broad walls of nothing” in the revised design.

“There’s some interesting architectural requirements that overlay this,” said board counsel Donald Cofsky. “Those elements are very specific, to make it interesting. They remain. There’s a section that talks about variation, materials, design, roofline.”

When the board entered into deliberation about the scope of the project, the interlocking issues of parking, density, and building height all became subordinate to the terms of the settlement agreement.

Modifying that 252-unit figure would have negated the terms of the settlement, however, and so the board didn’t touch it.

“The only other option that they could have done was, instead of having five stories on Haddon Avenue, [have]six stories on the interior,” said board member Nick Mink, the lone dissenter in a 5-1 vote approving the increase to 252 units.

When asked whether he thought the recommendations agreed to Thursday sealed the deal for the project to be completed, Mink replied, “I think this is going all the way through.”

The recommendations of the planning and zoning board will be considered by the Haddon Township commissioners at their July meeting, when the public will next have an opportunity to comment.