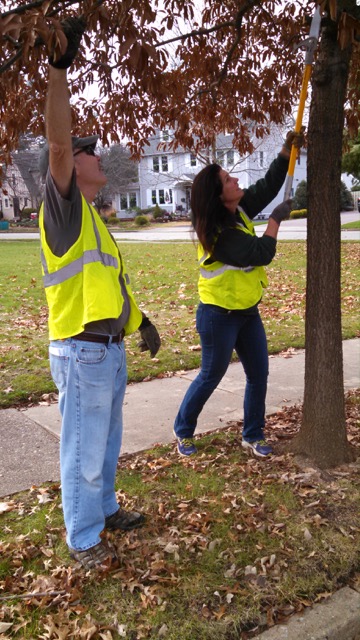 For the past four years, the Haddonfield Department of Public Works has gotten an extra hand in its upkeep of the familiar borough shade tree canopy from a local group of volunteers.

Calling themselves the “Branch Managers,” the group consists of some 30 to 35 residents who gather to chip in with the maintenance of local trees.

Robin Potter, who chairs the Haddonfield Shade Tree Commission, said the group provides a valuable stopgap service to help keep taxes manageable while also freeing up DPW staffers to focus on the professional—and higher-risk—forestry tasks in the upper canopies of 9,000 borough-owned trees.

“As a walking town, it’s really important that the trees be pruned back so that people can actually walk,” Potter said.

“The new trees were not being trimmed up and being shaped properly so that people could walk under them and cars could park under them easily.”

Potter, who serves on the Board of Directors for the Pennsylvania Horticultural Society and helps teach its “Tree Tenders” course to volunteers, decided to bring the principles of that program to Haddonfield.

She’s not the only botanical expert on the Shade Tree Commission, which includes Camden County Master Gardeners Jane Berkowitz and Deborah Troiani. Their expertise has guided the Branch Managers to plant some 50 to 80 trees annually and helped maintain the existing crop of borough trees with street-level pruning. 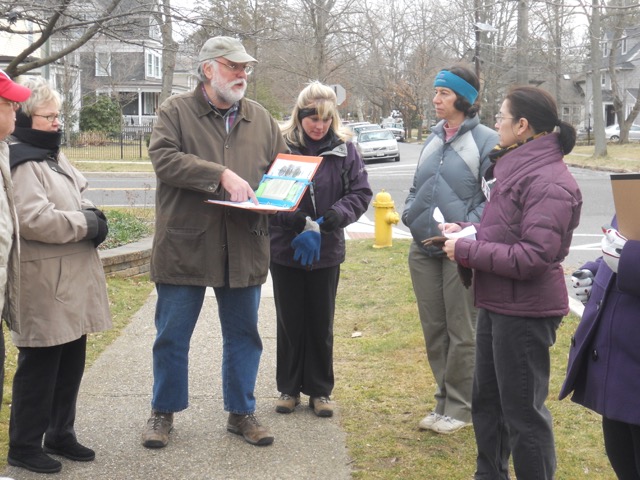 Twice a month from January through April, the volunteers spend three hours on a Saturday and three on a Sunday cultivating trees in a given section of Haddonfield.

Their work includes ridding the trees of crossing branches “and generally trying to make sure that the young trees can grow properly,” Potter said.

“We have a very dedicated group of volunteers,” she said. “In four years we’ve probably touched multiple thousands of trees all over town.”

The Branch Managers have operated throughout the borough, but their main focus has been the downtown business district. In 2016, Potter said they’ll start work on trees around Chews Landing Road and will probably continue to the neighborhood around Elizabeth Haddon School in February or March.

“We try to keep the main streets well treed,” Potter said. “We also need to make sure that the neighborhoods themselves have trees.” 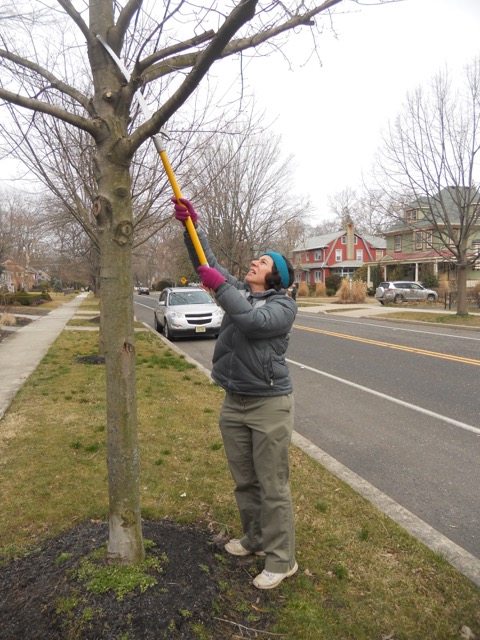 “If we had to contract out these services, or if we had to hire more personnel to Public Works, then it would be an expense for the taxpayers,” he said.

“I think the biggest thing at this point is that we are managing a major problem here: trying to get the dead and dying trees removed.”

Haddonfield trees have been under attack from diseases like bacterial leaf scorch and ash yellows. Although the branch managers have helped take down 200 trees, 10 times as many still have yet to be culled.

Moscatelli said the borough has been focusing so much on keeping up with the pace of the dead tree removals that “you’re starting to see some streets where tree-lined Haddonfield isn’t looking so tree-lined.

“It’s almost 2,000 trees that need to come down,” Moscatelli said. “We’re going to try in the next budget year to do some planting.”

The Branch Managers are always looking for more volunteers, and will train new members at a two-hour short course from 10 a.m. to 12 p.m.on Saturday, January 9.

The workshop will be held at the corner of Heritage and West Atlantic Avenues in Haddonfield. It is open to Haddonfield residents at a $10 cost, payable in cash or check. The course includes training materials; tools are provided. To register, e-mail jelkberkstc@gmail.com.

“The idea is that we take several trees, and, as supervisors, teach people how to do proper cuts,” Potter said. “That way, when people go home, they can take care of their own trees and shrubs.”