Self-described sex and relationship expert Patrick Stedman, 32, faces a decade in prison if convicted on federal charges. Stedman has extensively recounted his experiences during the January 6 riot on Twitter.

A Haddonfield man who proclaimed his participation in the January 6 riots at the U.S. Capitol to his social media followers has been arrested by authorities and charged with federal crimes.

Patrick Stedman, 32, faces charges of Unlawful Entry of a Restricted Building and Disorderly Conduct on Capitol Grounds, conviction of which is penalized by as many as 10 years in federal prison.

According to an affidavit of probable cause filed with U.S. Magistrate Judge Robin Meriweather on January 20, Stedman was arrested on the strength of tips provided to the U.S. Federal Bureau of Investigation (FBI) linking investigators to Tweets in which Stedman describes his alleged participation in the riots.

At 6:04 p.m. on January 6, 2021, Stedman tweeted a video in which he describes his participation in the riots:

“So we go up, we get to the top, and I see that the door has been broken into. There’s a little bit of glass on the floor, leading into the Capitol. And right next to that door there were about five cops in riot gear… I have videos throughout this entire thing. I videotaped it as we were going through it. And they let us in…

“I want people to understand this. The cops for the most part were not doing anything. They led us right into the Speaker’s chamber. I was pretty much in the first wave, and we broke down the doors and climbed up the back part of the Capitol building and got all the way into the chambers.”

At 7:57 p.m. on January 6, 2021, Stedman tweeted a video alleging that he saw a “backwards hat (Antifa) right where they were breaking into the main area of Congress,” accompanied by what appears to be a video shot from his phone inside the Capitol. 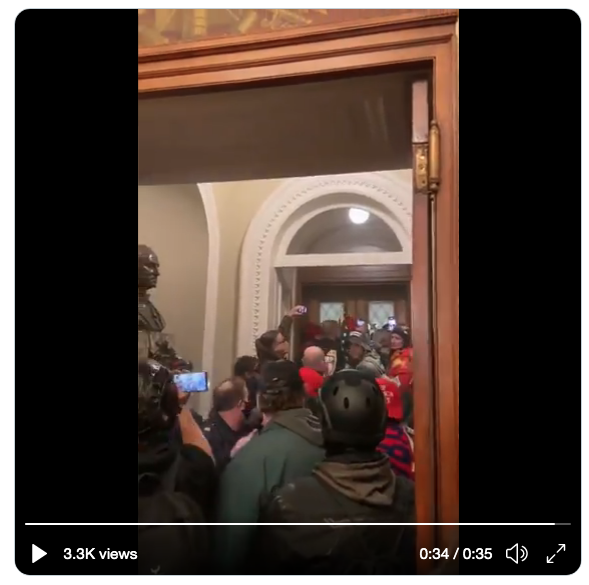 Stedman stands accused of violating U.S. Code 1752(a), and 5104(e)(2), statutes governing the behavior of visitors to restricted buildings or grounds and unlawful activities on the grounds of the U.S. Capitol, including “obstruct[ing], or imped[ing]  passage through or within, the Grounds or any of the Capitol Buildings” and “parad[ing], demonstrat[ing], or picket[ing]  in any of the Capitol Buildings.”

Stedman, who operates his relationship consultancy as The Dynamic Man LLC, takes his sexual psychology cues from Neil Strauss’ The Game: Penetrating The Secret Society Of Pick-up Artists.

“I don’t really like being in this position,” he said in the January 6 video blog cited by law enforcement. “I would much rather just be a dating and relationship coach. But when you see what’s going on, you have to deal with it; you have to address it…

“I have history on my side and you’re going to feel very, very bad about doing this later on.”

All persons accused of a crime are presumed innocent unless and until proven guilty in a court of law. An arrest is not a conviction.