Persistent water intrusion in the police department for the past several years has caused tens of thousands of dollars in damages and put officers at risk of environmental harm in the workplace. 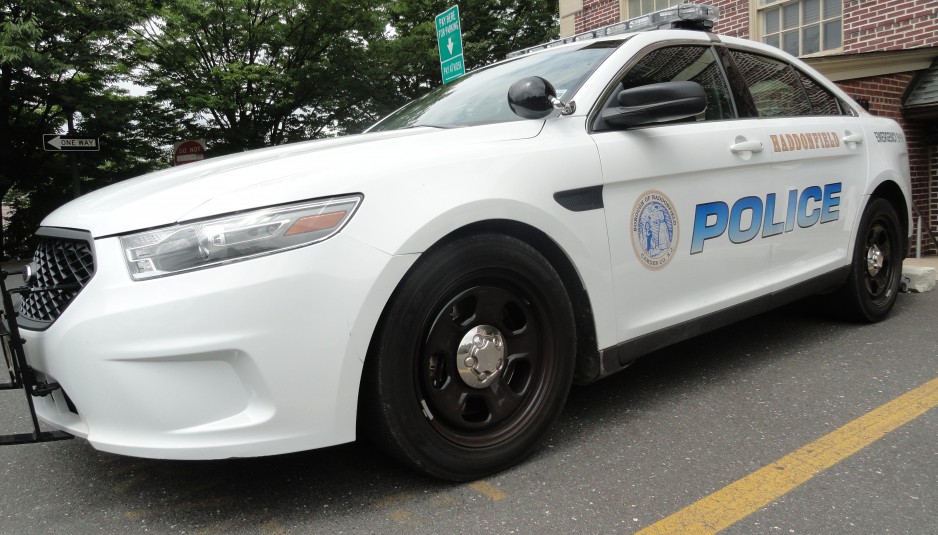 In addition to meeting the public safety demands of one of Camden County’s most well-heeled communities, for the past several years, Haddonfield Police also have been managing environmental concerns in their own facilities.

The department is situated in the basement of Haddonfield Borough Hall, an impressive and historic columnated building on King’s Highway, just a half-block away from the bustling heart of the community.

But the tiny basement from which the small force patrols the three-square-mile community—and its billions in ratable properties—is decidedly more modest.

Haddonfield Police Chief Jason Cutler estimates that, since 2018 or so, iron pipes that run through the building have failed at least 10 times, spilling water across various offices in the department, inconveniencing police and delaying their work.

The most consequential incident happened a week before Thanksgiving 2020, however, when Cutler’s office and that of his lieutenant next door were flooded when a pipe burst. Insurance-adjusted damages totaled $32,535, but the spill also displaced the chief and lieutenant from their offices for months afterwards.

The most recent leak, which occurred mid-February 2021, happened during a midnight shift in the police processing and conference rooms, and required officers to come off the street to clean up and call an emergency plumber. In total, Cutler estimates that 12 previously patched repairs are still awaiting permanent fixes in three different locations within the department.

The higher water table that surrounds the building only compounds issues for the department, which lacks a centralized ventilation system, putting officers at risk for breathing complications from issues like mold and mildew amid the water intrusion. “The first time, okay, it’s an inconvenience,” he said. “As things progress, and you’re up to your ninth or tenth instance, it’s very frustrating.

“We’re still doing our job at 100 percent,” Cutler said. “We just have to do it at 110 when you’re dealing with some other issues.”

According to Cutler, the most recent major renovation to the borough police station was done in 1982.

In the 39 years since then, the department has outgrown the building and its failing infrastructure within.

In 2013, the chief began exploring offsite options, starting with the Haddonfield Post Office.

The two properties are connected by a municipal parking lot, and, as Cutler discovered from his outreach through multiple levels of government, the borough post office only uses about 25 percent of the physical space in its footprint.

The chief further hoped to leverage support from Camden County by proposing that a merged facility could function as a regional operations center to supplement the centralized county emergency services site in Blackwood.

“It’s the best, closest building,” Cutler said. “I thought it was a great way to share services. It took a couple years to finally get the okay that the post office was onboard.”

However, when he presented his proposal to the borough government, the chief said officials balked at the potential expense of relocating the department and renting space, even from another government entity. Although the cost of repairing any old building is likely to be considerable, these issues—and their lack of resolution—has taken its toll on the department and its officers, Cutler said.

“It always seems to kick the can down the road,” he said. “It’s becoming a morale issue. Officers shouldn’t be coming into work in two inches of water.”

Haddonfield Mayor Neal Rochford said that his understanding of the facility issues at Borough Hall don’t end with problems in the basement. 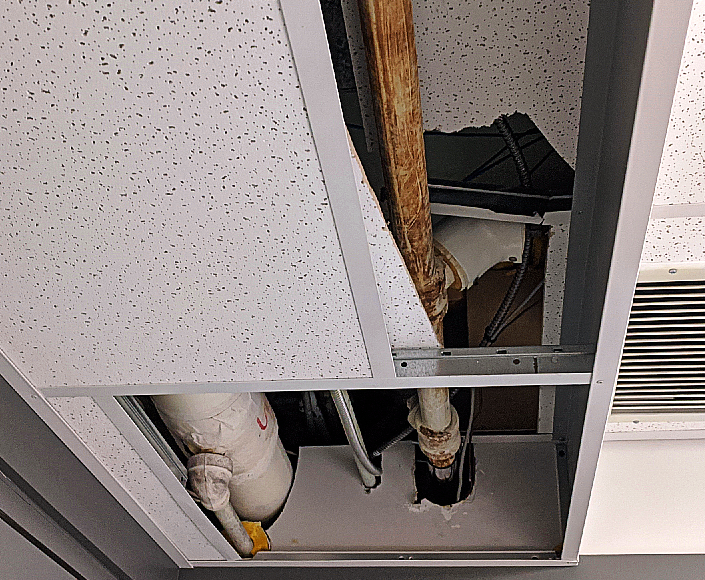 “It’s an old building, and it’s starting to show its age,” Rochford said.

“We have a leak in the roof that we’ve been trying to fix forever. We had to put a new heater in two years ago, and even that isn’t working exactly the way we want it do,” he said.

“We’re looking at the problem and a cost-effective way to fix it,” Rochford said. “Whatever we do, it’s not going to be an easy fix.”

Haddonfield Commissioner Colleen Bianco Bezich, who also serves as the borough Public Safety Director and liaison to its police department, said she’s been working with Cutler to find a permanent solution to its problems.

Bianco Bezich said borough engineers Remington and Vernick have established that the building foundation is shifting, and its infrastructure, including plumbing, is failing; plus, whether it’s due to a pipe backup or ground saturation, water is percolating up into the basement.

The reason the issue hasn’t yet been dealt with is because doing so will require potentially 12 to 18 months of work, from investigation to charting solutions to enacting the remedies, she said. And none of the solutions are expected to be cheap: repairing the building foundation alone, for example, would be a million-dollar-plus job.

“In my mind, this is not going to be a quick fix, and there should be a long-range plan,” Bianco Bezich said. “The immediacy in my mind is the police operations.

“Right now, I’m trying to do my homework, and the engineers are helping with that,” she said.

Bezich and Cutler said they have scouted additional options throughout the community, including the post office. Both are working together to devise short- and long-term solutions to the problem, but both know any fixes will be far enough off that police are likely to continue experiencing these issues in the meantime.

Cutler praised Bianco Bezich for her strong support of the department and its needs. He also keeps a realist’s attitude towards the length of the timeline for any solution at which the municipality eventually arrives.

“Whatever they decide to do, it’s going to cost money, and it’s public money, so you make sure you do it fairly, equally, and with regard for cost savings for the borough,” Cutler said. “Sometimes we get stuck in the middle of that.

“I’m just concerned what else lurks behind the walls,” he said. “I don’t have the answer for that.”