Trending
You are at:Home»Business»‘Hearthside’ Restaurant Plans Summer Opening in Collingswood

Dominic and Lindsay Piperno have rounded out the executive team and branding for their New American wood-fired eatery on Haddon and Frazer Avenues. 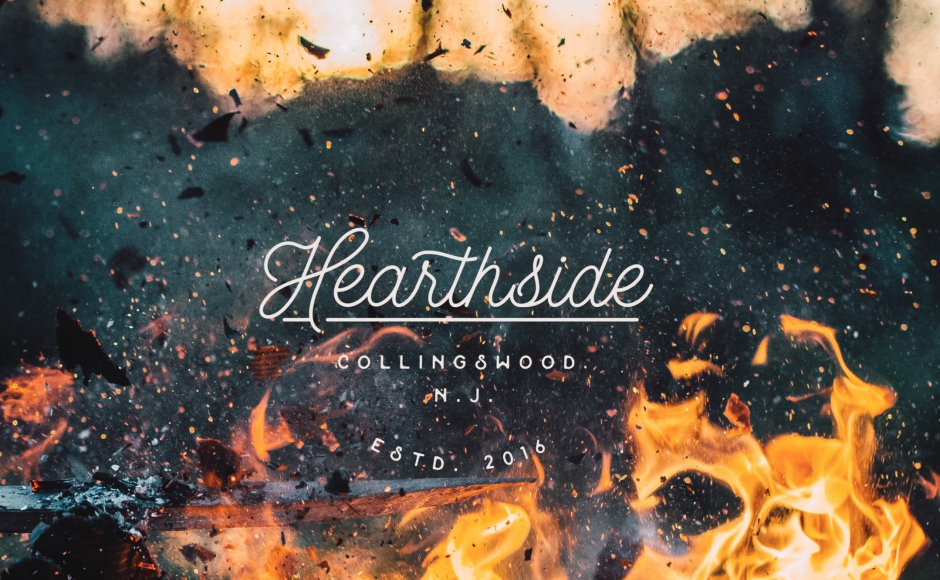 The Pipernos contracted with Ford Haegele of Karma Agency to create their branding. Credit: Hearthside.

The crackle of the fire can lend a variety of flavors to vegetables, meats, and more, introducing tastes that range from smoky to charred to caramelized.

But there’s also a deeper connection with the elements that an open flame can stir—warmth, intimacy, comfort—upon which Piperno and his wife, Lindsay, will draw at their new Collingswood restaurant.

The couple, who have rounded out their executive team with general manager Delise Barron of Haddon Heights and co-executive chef Aaron Gottesman of Philadelphia, also announced the branding and concept for the establishment this week: “Hearthside.”

The identity emerged from the wood-fired oven and grill at the center of their new-construction building at the corner of Haddon and Frazer Avenues. It’s reinforced in the branding, by Ford Haegele of Karma Agency in Philadelphia, which overlays the logo on a woodcut bellows.

Lindsay Piperno said Hearthside is intended to present as “the room next to the fireplace,” and she wants guests to share that feeling when they visit.

“It’s an extension of our house,” Barron said. “It’s going to be warm and inviting and clean and good.” 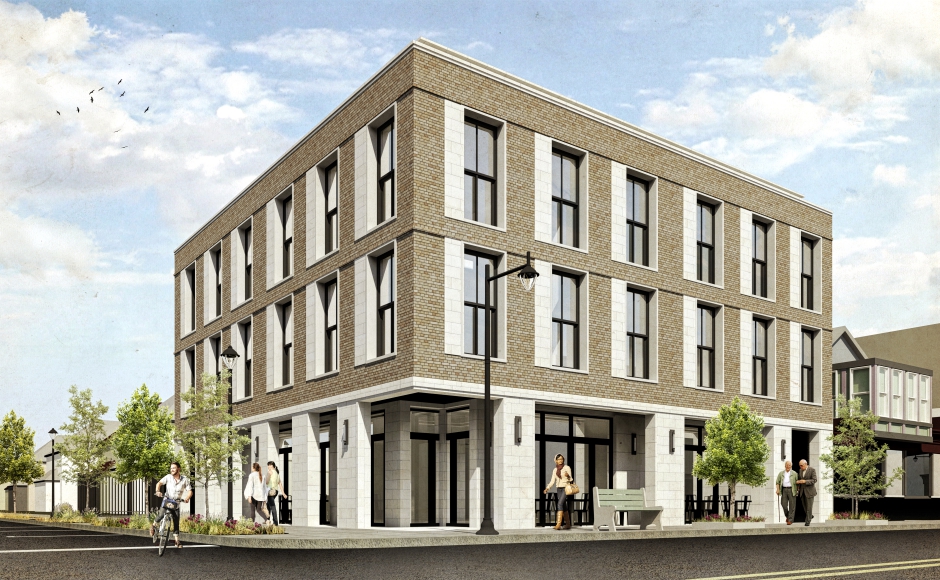 Rendering of the Pipernos’ plans for their restaurant. Credit: Ambit Architecture.

Barron and Lindsay Piperno met while working at Treno in Haddon Township; Gottesman and Dominic Piperno connected at Vernick in Philadelphia.

The four found they shared aesthetic as well as culinary sensibilities, and Dominic Piperno said it “made sense” to collaborate on Hearthside.

“We wanted to get into business years ago,” Barron said.

“Their philosophy for the feel, the concept, the way that guests will feel at the restaurant was really exciting to me,” Gottesman said. “It all worked. It seemed like a great opportunity.”

Gottesman came up through Kevin Sbraga’s restaurants, having opened The Fat Ham on Walnut Street as his chef de cuisine. Dominic Piperno cut his teeth with four-time James Beard nominee and Collingswood contemporary Joey Baldino before landing at Vernick.

The two chefs share a love of New American fusion cooking and the expanded flavor options it gives them; Dominic Piperno, who trained in Italy, defers to Gottesman’s culinary vocabulary in American Southern and French styles. He believe that together the pair “will be able to offer a true sense of what contemporary American is.” 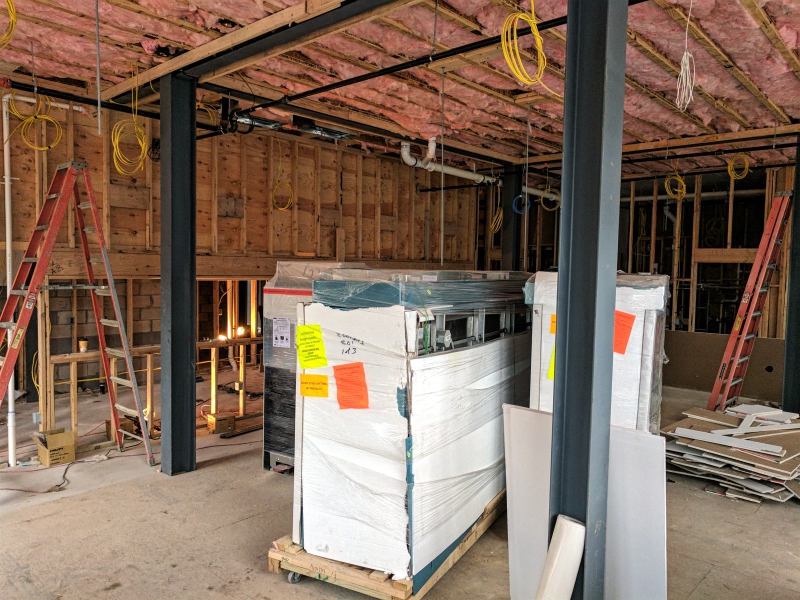 Although the restaurant is still under construction, the wood-fired oven and grill at the center of the Hearthside concept is onsite. Credit: Matt Skoufalos.

“Our food will go with the season,” Dominic Piperno said: “light and vegetable-driven in the summer; when it goes into the fall, you get hearty braises and dishes. In the winter, it’s more protein-driven; in the spring, vegetables.

“That’s the luxury of calling it ‘contemporary American,’” he said.

“If, for two weeks, our menu seems very Mediterranean, Spanish, or Asian, it’s okay, because we can kind of cook whatever we want.”

Reluctant to discuss dishes so far ahead of their opening, the chefs agree the prevailing intention is “as seasonal as possible” with the best available ingredients. Pop-up dinners at Balboa Catering & Supper Club in Philadelphia will offer a preview of the flavor profiles with which they’re working, albeit without the wood-fired oven flavor. More will be announced on social media in the ramp-up to a planned summer opening.

Barron said she wants the atmosphere at Hearthside to “walk the line between refined and accessible,” with an emphasis on seamless, high-end, tableside service. Lindsay Piperno said it should feel “rustic-but-romantic,” and Gottesman wants it to be an experience “where people feel comfortable coming back two to three times a week, if they want to.”

“We think that the food in Collingswood is really good and they do a great job, but the service aspect and hospitality is really going to set us apart from a lot of stuff that goes on here,” Dominic Piperno said. 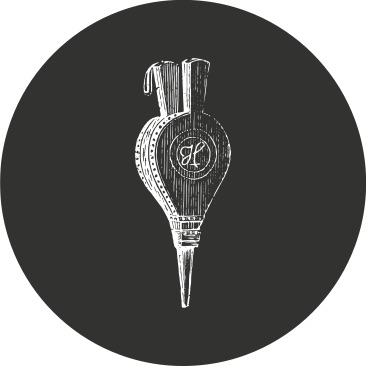 The Hearthside branding elements include a bellows. Credit: Hearthside.

“It’s a culture we want to build within our walls,” he said.

“It starts with the four of us, and hopefully trickles down to the bussers and the servers.”

Lindsay Piperno said the 45-seat eatery will be decked out in materials that help set the mood.

The couple has contracted with neighbor Tom Marchetty at The Factory for live-edge wood tables, to be offset with metalwork, live greenery, and a custom-built, glide candle light fixture. The fireglow will add additional texture.

Outside, Hearthside will offer radiant heat flooring to extend the al fresco dining season through chillier times, new streetscaping with outdoor plants, and focused lighting that flows along its exterior columns.

The restaurateurs hope the discrete elements of light, music, and the smell of the oven will work together to draw in passersby. They also want the menu to feel accessible to their neighbors as well: affordable for dinner, small plates, dessert, or all three.

“We understand where we are,” Dominic Piperno said. “We want it to be where a couple from Collingswood can come in and each get a bowl of pasta, split a couple appetizers and leave, or sit outside at tables and have coffee and dessert.”

A focus on the community is what drew the Pipernos not only to open their business in Collingswood, but to make their home in the borough as well. Although he’s still learning about the town, Gottesman said the 12-minute commute from his Philadelphia home means he’ll come to know it better. 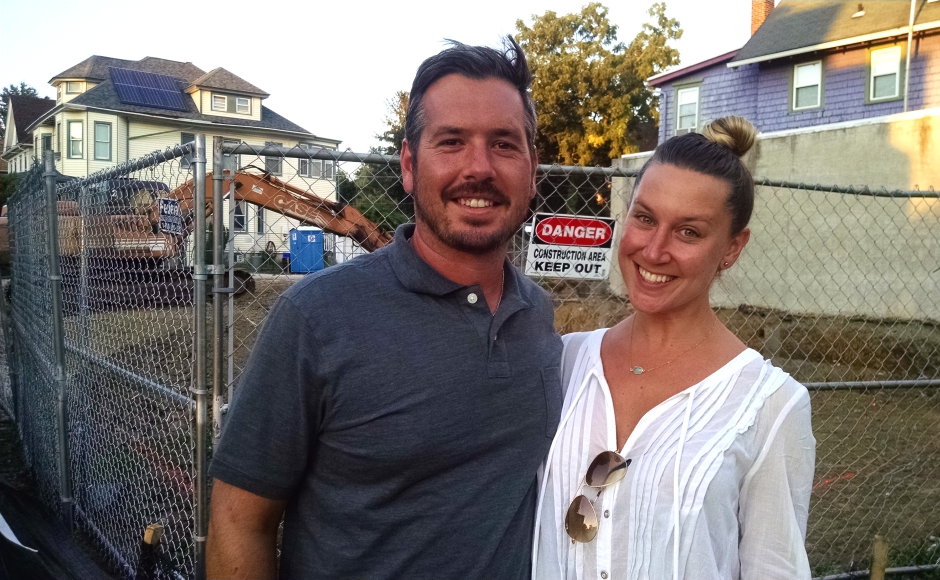 He’s timed the walk from the PATCO Speedline platform to the front door of Hearthside at three minutes flat, and believes that will be a selling feature for out-of-towners as well as local commuters.

Barron said the restaurant, which will be closed on Sunday but open Monday through Saturday, will also cater to the same food industry workers alongside which they’ve all taken the train into Philadelphia to work.

“We also want to support the other restaurants,” Dominic Piperno said. “We only succeed if the town succeeds. We’re all in the big game together, trying to put this place on the map.”