Trending
You are at:Home»People»Heavy Hearts Seek Solutions for Peace at Collingswood Vigil

Dozens gathered at the corner of Woodlawn and Haddon Avenues Friday to mourn a month of heated global and domestic violence. 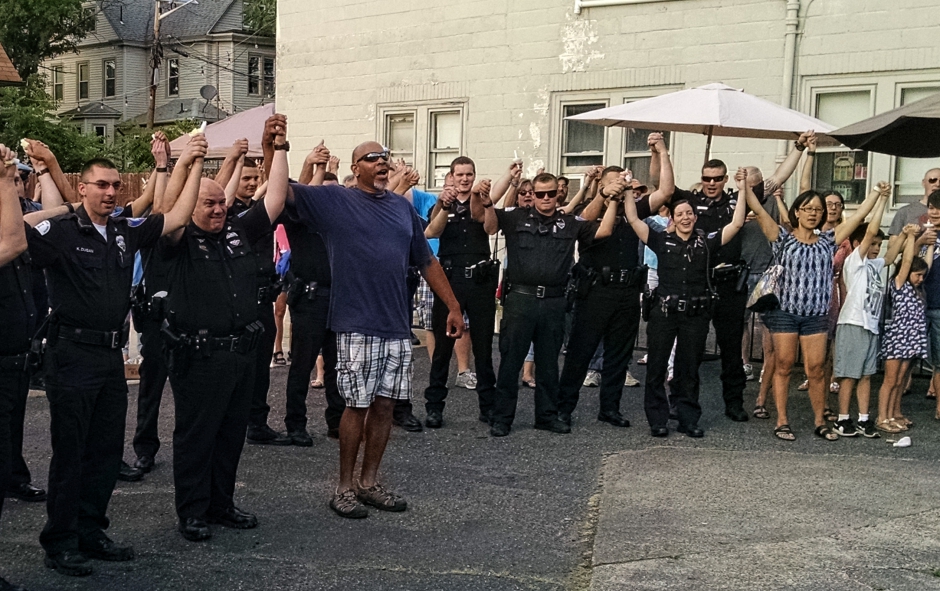 After a month of deadly domestic violence that began with the Orlando Pulse nightclub killings, heightened after a pair of high-profile, police-involved shootings in Baton Rouge and St. Paul, and crescendoed in a sniper attack on police at a Black Lives Matter protest in Dallas, Collingswood Mayor Jim Maley admitted Friday to having a degree of “vigil fatigue,” as the borough organized its second local peace rally in four weeks.

“We started putting this together after Dallas,” Maley said.

“A lot of the violence was awful; that was a whole new twist.”

Flanked by uniformed officers and first responders from the borough police and fire departments, Maley spoke Friday about the role of media in communicating the depth of civil unrest in America.

During the 1960s, he said, “television helped bring an end to the Vietnam War because you saw it every day” on the evening news. Today, however, similar footage is omnipresent, thanks to a 24-hour news cycle and social media atmosphere that has turned audiences into contributing observers.

“It’s a good thing and it’s a bad thing,” Maley said. “It’s a horrible thing to keep our children away from it and ourselves away from it. [But]  seeing these things, it makes a difference to us.” 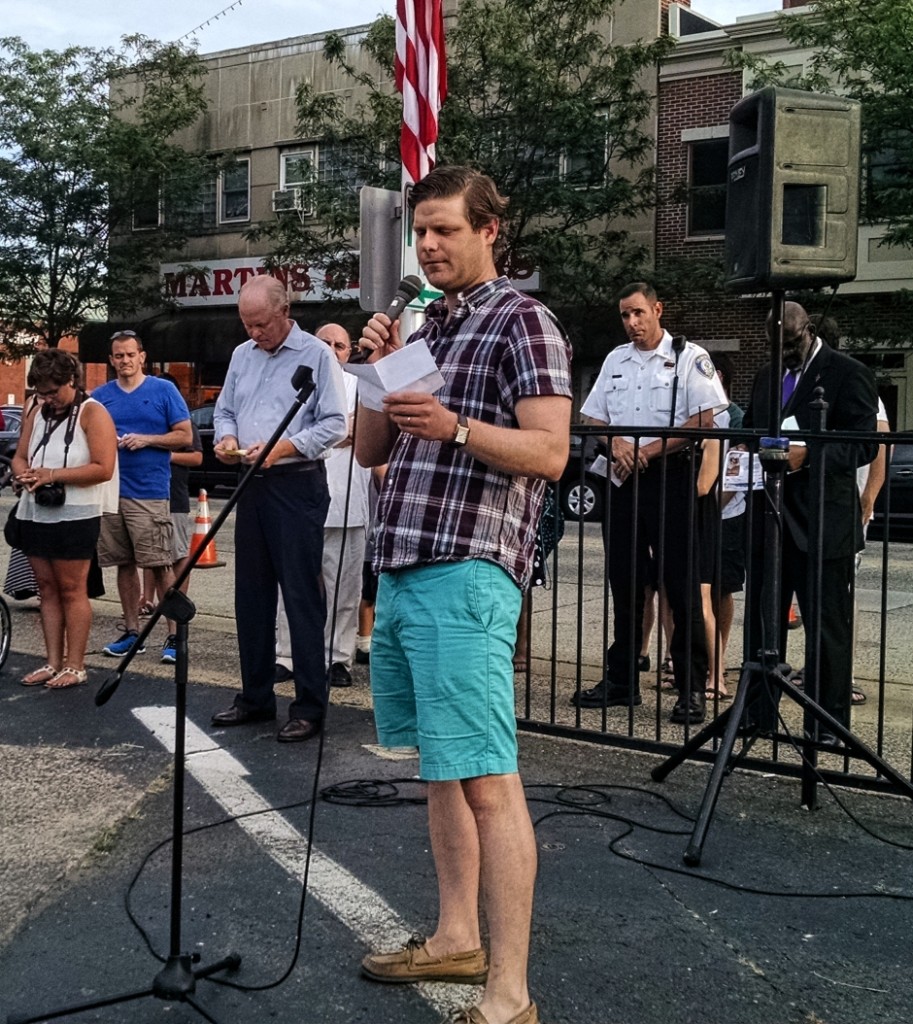 Taken collectively, they can feel like discrete elements in a series that stretches from Orlando to St. Paul to Baton Rouge to Dallas, but which also touches Baghdad, Istanbul, and Nice.

In such an environment, people are left to ask, “How long?” Angehr said, a question that has motivated people to action.

“How might we live differently?” he asked. “How might we mold our question of ‘How long?’ into a resolution of ‘Too long’.

“We honor the dead by serving the living,” Angehr said.

Stephné Coney, founder of the National Stop the Violence Alliance, spoke about the need to build “a community of trust” between the community and law enforcement. She asked those in attendance to hug a stranger and say, “I’ll be there for you.”

“Hate has no place,” Coney said. “Racism, discrimination, violence has no rock to shelter under. Take a look at yourself and look at your biases. This behavior is taught or it is ordered. It is shameful. 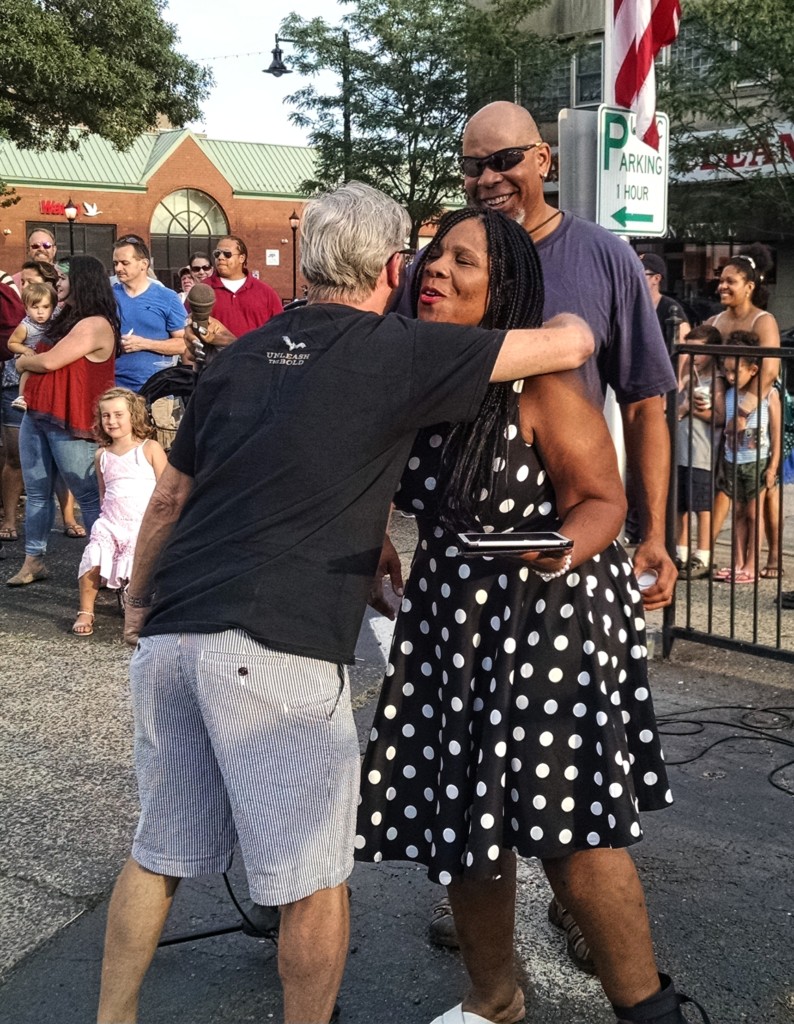 Stephne Coney gets a hug from an attendee at Friday’s peace vigil. Credit: Matt Skoufalos.

“We have to partner with law enforcement,” she said.

“That’s the only way we’re going to break the tension. We have to communicate.

“To keep ahead of violence as a whole, you have to keep in touch with the community you serve,” said Collingswood Police Chief Kevin Carey.

The chief spoke about how his officers are coached to engage with the community so that they can understand the different experiences of its diverse members but also to de-escalate confrontations that, if mishandled, can lead to violent encounters with authority.

“Instead of pointing a finger, we should be extending our hand to sit down and have a conversation about how we can create change,” Carey said. 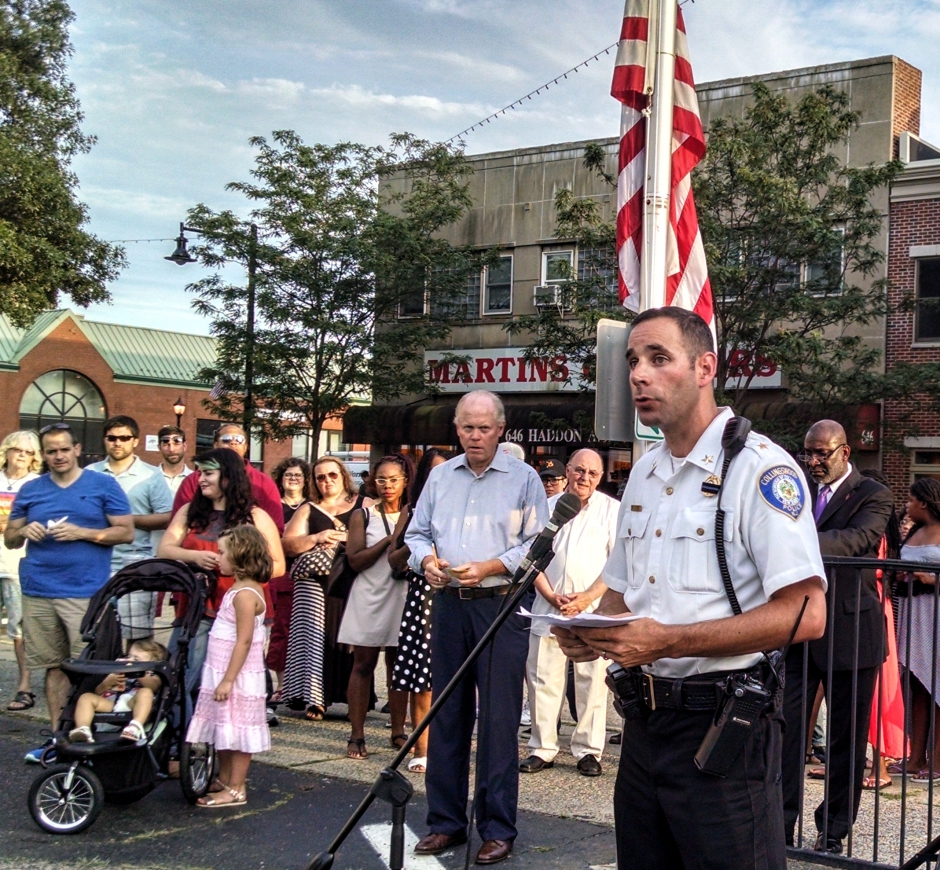 Rev. Dennis Blackwell of the Asbury United Methodist Church in Woodlynne spoke about the need to create “a common table” around which people can “confess and confront all the –isms and schisms” that keep it from being what Martin Luther King, Jr. called “the beloved community.”

Blackwell called upon law enforcement and community members to develop working relationships based on “ethical demands to work in the spirit of harmony.”

However, Blackwell noted, “the prerequisite for peace is justice.”

Without practical solutions that respect cultural differences and offer citizens their individual dignity, the authority that extends from the state is misplaced.

“All of us are people of sacred worth and who have innate value,” he said in a concluding prayer.