Maudi Silver-Mallemat and Haney Mallemat of Haddonfield are opening up a contemporary flexible office space with childcare services and a kitchen commissary in the former All-Star Trophies storefront. 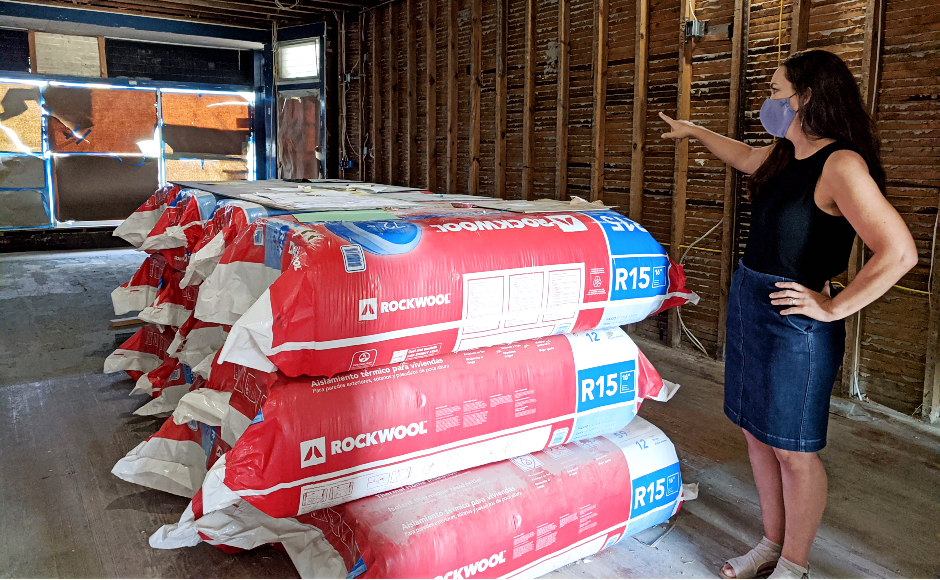 If coworking was a growth industry prior to the onset of the novel coronavirus (COVID-19) pandemic, it feels even more poised to take off in a post-pandemic economy.

But as the past 18 months has presented the opportunity for people to change careers, if not entirely reframe their own relationships to work, it’s also reinforced the need for different types of flexible spaces to meet the needs of an increasingly entrepreneurial workforce.

According to Technical.ly Philly, in 2020, coworking spaces accounted for 1.1 million square-feet, or about 1 percent of all the office space in Philadelphia. And in Camden County, several such incubators, collaborative spaces, and ad-hoc, open-office environments have emerged in the past decade, including King’s Hall in Haddonfield, the The Fish Tank and Haddon Kitchen Incubator in Haddon Township, The Factory in Collingswood and Cherry Hill, Ryan’s Retail in Merchantville, and CoWork Street in Camden City.

The latest to join their ranks, Hub 868, is being built out across three Collingswood storefronts: 866, 868, and 870 Haddon Avenue, which formerly housed Bill Sonsini’s All-Star Trophies for nearly half a century. Owners Maudi Silver-Mallemat and Haney Mallemat of Haddonfield took on the work of updating the mixed-use, commercial-residential spaces in 2019.

For a full year, they laid the groundwork for the project, which squeaked in its approval from the borough zoning board just as the novel coronavirus (COVID-19) pandemic arrived in New Jersey.

“It was March 9 that they said yes, and that Friday the 13th, that was it,” Silver-Mallemat said.

“And then my husband disappeared into the hospital, my kids were home, and the whole entire landscape of the working world changed.” 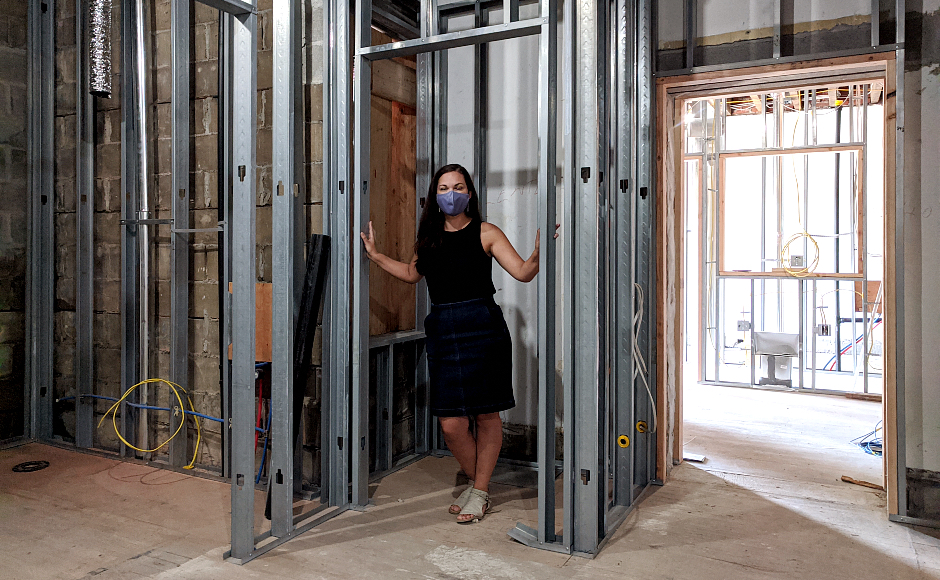 Maudi Silver-Mallemat inside the framework of an isolation booth at Hub 868 in Collingswood. Credit: Matt Skoufalos.

Silver-Mallemat’s own work history is extensive and varied.

A native of Chico, California who moved to the east coast in 2001, she’s worked in public healthcare in New York City, taught collegiate courses in women’s studies in Baltimore, and even ran her own farmstand cupcake business in New Hampshire (a byproduct, she said, of living really close to the King Arthur Baking Company).

In addition to raising three children while she did it all, Silver-Mallemat also supports the Resus Leadership Academy, an online medical fellowship co-developed by her husband, Cooper Hospital emergency physician Dr. Haney Mallemat.

If there’s anyone who recognizes the challenges and needs of remote, contract, and entrepreneurial workers, it’s her.

“I think going to work has taken on a whole new meaning to the entire world,” Silver-Mallemat said. “I think we’ve also been working at home enough to know that sometimes we need to get out of that environment.

“This is a space free of distractions, filled with people you want to be around, and we’re excited to be able to offer support for accelerating businesses,” she said. 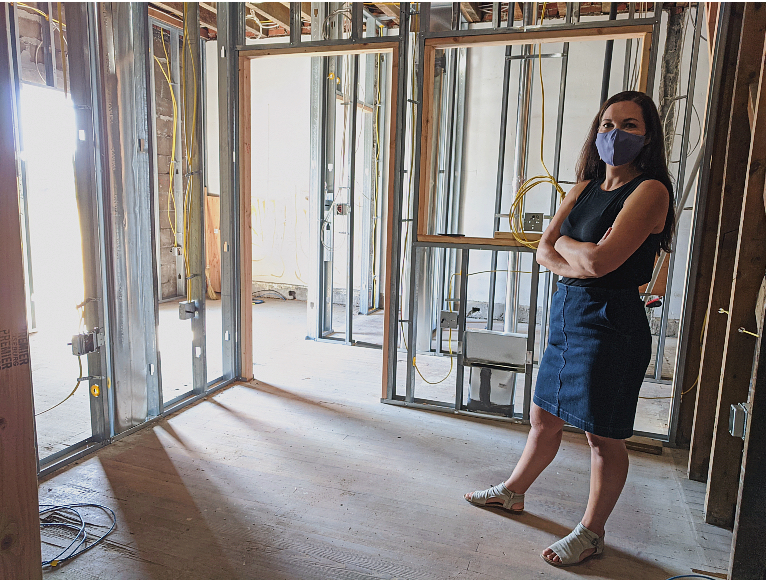 Maudi Silver-Mallemat inside the recording booths at Hub 868 in Collingswood. Credit: Matt Skoufalos.

She’s also focused on delivering a high-quality experience for members, with touches like a soundproof, custom-made phone booth for taking important calls, hard-wired networking connections, and design elements that consider the legacy of the space in its redevelopment.

“We’re trying to keep with some of the historic elements of the building,” Silver-Mallemat said.

“I’m trying to save old glass block from the windows; we’ve got this cool cast-iron sink that we’re repurposing for the coffee station.

“Furniture is being built from wood salvaged from the space; we’ve got tabletops saved from another restaurant.

“We like the old buildings,” she said. “We like to rehab them and bring them back to life, and that was part of the attraction for this building.”

The membership packages at Hub 868 haven’t yet been defined, but they’ll be largely influenced by market demand for the space. Foremost, she wants Hub 868 to take its direction from the community its coworkers create.

“I think we’re really moving towards a very local community and boutique style, and I think that the personality and overall feel that people are going to experience is really going to come through the members,” Silver-Mallemat said.

“I really want people to feel like they can own the space; that it’s their home away from home,” she said. “Most of the successful coworking spaces have that community vibe. Collingswood has that community vibe. Some of the businesses that don’t have a brick-and-mortar home, we’re giving them a place to be.” 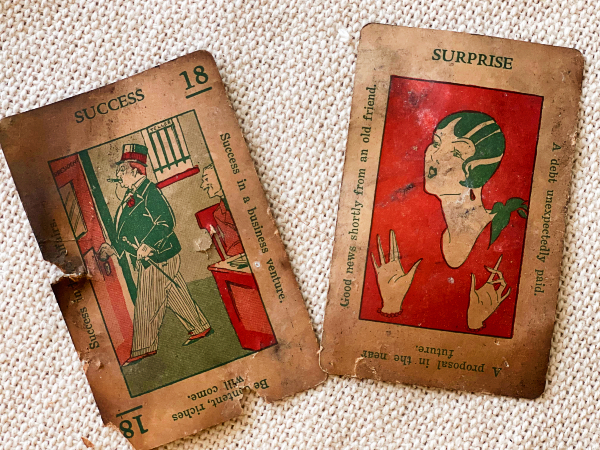 “Success” and “Surprise,” antique cards from the Gypsy Lore Fortune Telling deck uncovered in the walls of Hub 868 in Collingswood. Credit: Maudi Silver-Mallemat.

Silver-Mallemat is hopeful that Hub 868 will be ready to open its doors to members by the late fall.

Although forecasting project outcomes is a challenging game, the building itself appears to have given her a good omen.

On a mid-construction walk-through, she discovered a pair of antique Gypsy Lore Fortune Telling cards tucked between a wall and a floor: “Success” and “Surprise.”

For someone who enjoys decorating with found objects, the moment was not lost on her.

“The building’s talking to us,” Silver-Mallemat said. “It’s inspiring.”