Trending
You are at:Home»Government»Improvements Coming to Newton Lake

Signage, landscaping, and maintenance projects are underway at the park.

Overlooking the playground at the bend in Lakeshore Drive, the pavilion at Newton Lake Park in Haddon Township, is a familiar sight to visitors seeking a break from the elements.

The interior crossbeam marks it as “Lees Shelter,” but whatever you call it, the local landmark is getting a much-needed facelift this month, including a new roof.

“It’s a beautiful structure, it was just becoming a hazardous situation that needed to be repaired,” said Camden County Freeholder Jeffrey Nash. 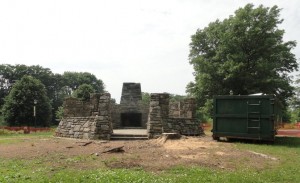 The replacement roof on Lees Shelter in Newton Lake Park is a part of larger improvements throughout the county parks system. Credit: Matt Skoufalos.

The improvements are part of an influx of cash from the county government, and include a reconstructed parking lot at the intersection of Lakeshore Drive and the White Horse Pike, along the Oaklyn/Collingswood border.

The total value of the project is estimated at $570,000, and includes landscaping along the Cuthbert Boulevard entrance to the park in Haddon Township, fencing along Lakeshore Drive and Lees Lane in Collingswood, and signage and new plantings throughout the 103-acre greenspace.

Nash called Newton Lake “one of the treasures of Camden County,” and said that the county “has spent an extraordinary amount of time and money to enhance the aesthetics” there, including bridge repairs, battling perennial algae blooms, and pruning back the brush along the banks of the lake.

The entire Camden County parks system is getting a “design structure” overhaul “to give the parks a more meaningful sense of place,” said county spokesman Dan Keashen.

Some aspects of the existing county parks infrastructure “haven’t been touched for a long period of time, and are in desperate need of revitalization,” he said.

“We’re taking an account of these different entities,” Keashen said.

“In some cases, they’re overdue, and in other cases, they are additions that are different, but are going to have an overall benefit to the towns that they sit in.”