Evidence suggests that King rented a room at 753 Walnut Street while studying at Crozer Theological Seminary in the 1950s. A campaign to preserve the house is being reviewed by the NJDEP. 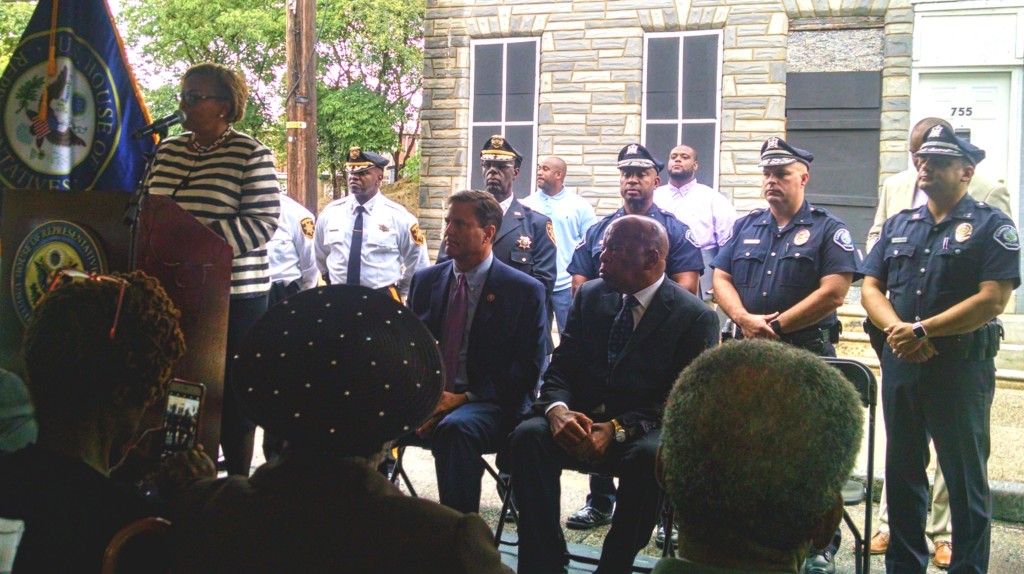 Its copper has been stripped, its soffits are crumbling, and all the windows are boarded up.

The home was last occupied longer than 20 years ago, and in the intervening years, much of the surrounding block has been truly blighted.

But the house at 753 Walnut Street in Camden City is where Dr. Martin Luther King, Jr. lived during some of his formative years as a theological student.

For more than two years, a local effort to preserve the home, which is in as much financial distress as it is environmental, has been underway with the state Department of Environmental Protection. On Monday, that push gained federal support from Congressmen Donald Norcross (D, NJ-01) and John Lewis (D, GA-05), as the pair visited the property to advocate for its restoration.

Homeowner Jeanette Lily M. Hunt envisioned revitalizing the property as “The Martin Luther King Educational Resource Center,” a historic site “to benefit all people.” Hunt said the property, which has been in her family since at least the 1940s, has been “beaten up by the weather,” but “it’s still standing.”

When she knew King, he was a theological student at the Crozer Theological Seminary in Upland, PA and a boarder in the home. Hunt described King as “a very nice, quiet man” who had yet to rise to the global prominence he would eventually assume. 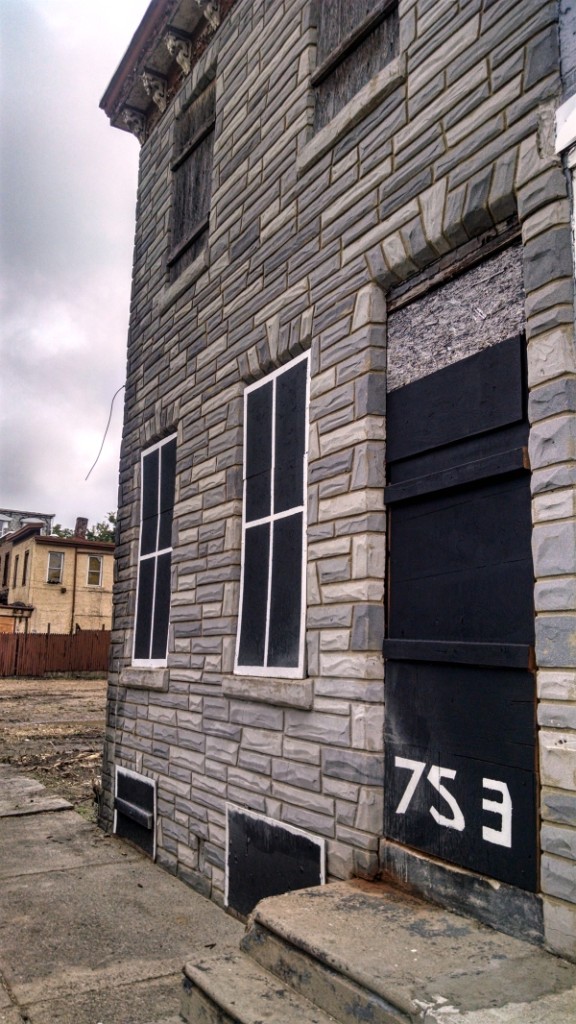 A house at 753 Walnut Street in which Martin Luther King studied as a young man. Credit: Matt Skoufalos.

At that time, the block was filled with young families, and it was “beautiful,” she recalled. With any luck, resurrecting the property will be “a good turning point” for the remainder of the neighborhood, Hunt said.

Patrick Duff, a car salesman from Haddon Heights and a civil rights buff who has advocated for the preservation of the house, said he’d discovered a police report signed by Dr. King that listed 753 Walnut Street as his address.

“In a sense, the first official sit-in Dr. King was involved in happened in Maple Shade,” Duff said.

King and a group of colleagues were refused service at the now-demolished Mary’s Place at Main Street and Route 73, and threatened by the owner of the pub at gunpoint, Duff said. Still, they refused to leave.

The 1947 law that made it illegal to refuse service to people based on their ethnicity was championed by Camden physician Ulysses S. Wiggins, who helped guide King through his encounter with law enforcement in Maple Shade.

Wiggins, the namesake of the Camden waterfront park where Martin Luther King Boulevard terminates, was also the city’s NAACP president, and often would waive his physician fees in exchange for patients buying membership in the organization, recalled current NAACP President Kelly Francis.

After his death in 1966, Wiggins’ home, which also served as his residence and the NAACP office, was vandalized and caught fire. Years of records were destroyed, including documents that might have helped link King to the home much earlier, he said.

“If it hadn’t have been for that, we could probably have started this process a long time ago,” Francis said. 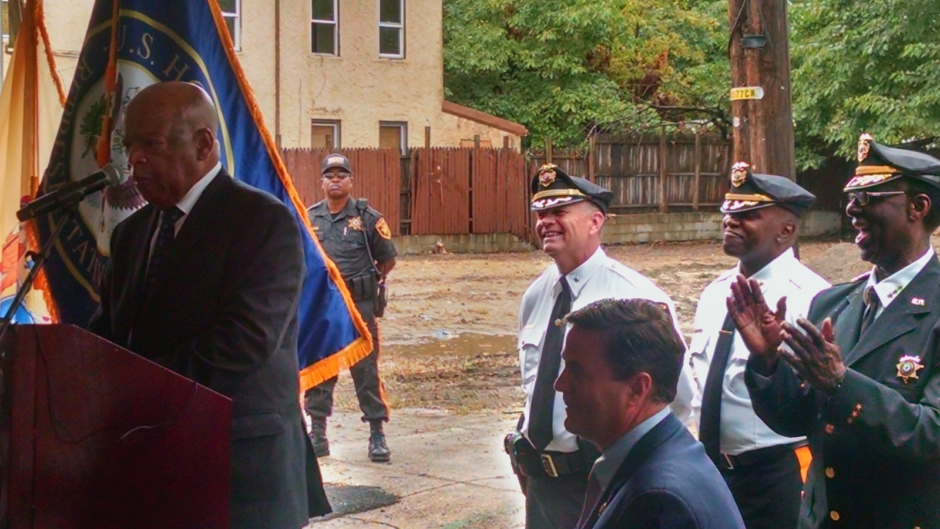 Representative John Lewis (D, Georgia), a long-serving civil rights leaders who marched with King from Selma to Birmingham, said that preserving the building was “necessary trouble” to save a piece of real estate that “must be saved for generations unborn.”

King “was a wonderful human being,” who “inspired me to stand up by sitting in and sitting down,” Lewis said.

“I would love to come back here and visit when the marker is placed and this building is restored, and it will be a day of jubilee,” he said. “Hang in there. It’s all gonna work out.”

Across the street, however, residents Darryl Macklin and Lamaar Sample talked about the existent need on the rest of the block.

“I think it’s a great thing for the community to have the opportunity to preserve this house and have tourists come in,” Macklin said. “But when you have these projects, they fix one area and they push the others out.”

Neighboring 774 Walnut Street is in disrepair, too, said its homeowners. Credit: Matt Skoufalos.

Macklin, whose family has been in the home at 774 Walnut Street for 90-plus years, worried that he will either lose the property for the lack of paperwork connecting his ancestors to its current owners, or that it will fall down for want of repairs.

When work was done to demolish two adjoining unsafe structures as part of the city’s 600-unit rehab project, it rattled loose a significant portion of the front facade of his home, which he and Sample had bolstered with lumber and stakes.

“They’re going to get public funding to fix [the King home], and they’re not going to help the people in the neighborhood,” Sample said.

Bergen Square doesn’t have a viable community development corporation (CDC) that could help advocate for residents like Macklin and Sample, said Francis, who is the vice-chair of the Parkside neighborhood CDC.

Without the support of such a group, renovating the rest of the block for current neighbors will be difficult; however, restoring the King home “could be the beginning of Bergen Square being revitalized.” Francis said.

Camden City Council President Frank Moran said that “additional unsalvageable properties” on the block have yet to come down, and agreed that redevelopment of the neighborhood will turn on collaboration with CDC’s and some “aggressive marketing.

Moran said the city is likely to explore a lien in lieu of foreclosure on King property owing to its historical significance. In such circumstances, the city would become responsible for renovating the lot, which he said was “a win-win.

“Many successful people have had some interaction with the city over the years,” Moran said. “It’s an honor, and I think we can make it happen.”