Trending
You are at:Home»Schools»Collingswood»In Collingswood, Community Triumphs Over Cancer

Support from families at Tatem Elementary School and the community at large kept the Schell family and its six children on course throughout their mother’s yearlong fight. 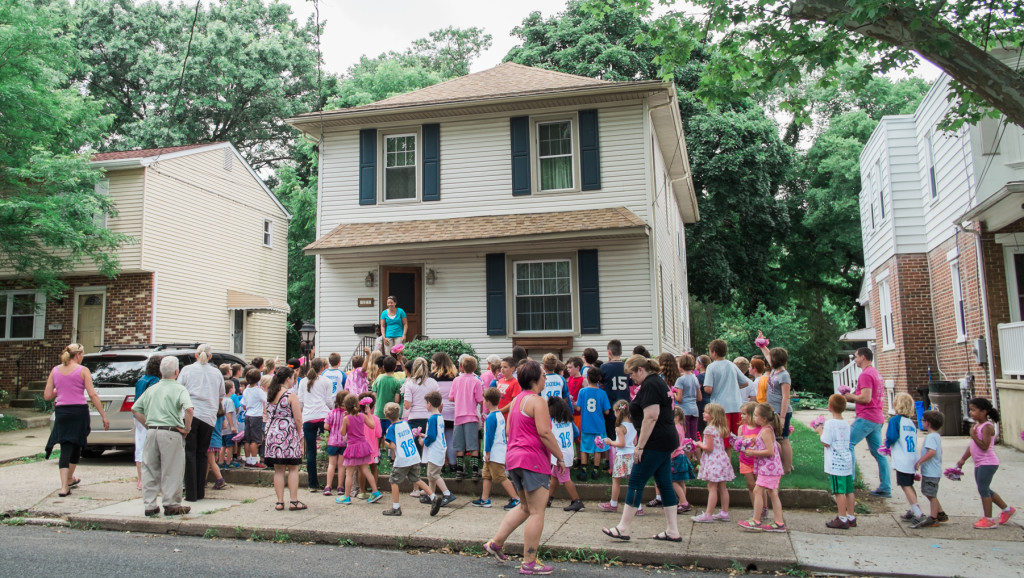 Kristin Schell was at home Monday afternoon, waiting for a friend, when her dog erupted into a barking fit.

Over the din there was another sound: the voices of several small children.

Her adopted daughter, Jenny, went to the window.

“What the problem!” Jenny shouted. “The kids are here!”

The entirety of William P. Tatem Elementary School was standing out on the Schells’ front lawn, bearing handmade, pink, paper flowers to commemorate the family’s endurance of one of the most difficult years of their lives.

‘I was devastated and worried’

On August 12, 2014, Kristin Schell was diagnosed with breast cancer. On August 13, she asked to meet with Tatem School Administrator Jennifer McPartland. Four of Schell’s six children attend the school, and, “like any mother would be,” she said, “I was devastated and worried about my kids.

“I cried; she cried,” Schell said. “I said, ‘I just need to get to the end of the school year,’ and they said they would do whatever they could to help.”

“That moment is so vivid for us,” McPartland remembered.

“What struck me most was despite the fear in that moment, of her not knowing what the road ahead was going to be, she had this unbelievable optimism.”

Schell started chemotherapy five days later. The evening after the first day of school, she was in the emergency room, praying her hair wouldn’t fall out. It did anyway.

“The first four rounds of chemo are called The Red Devil,” she said. “It looks like Kool-Aid. They have to sit there with a gigantic syringe and they inject it into the IV. It affected my liver, my heart; the tiredness was pretty bad.”

In addition to having six school-aged children, Schell’s husband Matthew is a teacher in Camden City, which means that although he is home when the children are, he can’t take them to to school. Kristin Schell got all six out the door herself throughout the year–four to Tatem, one to the Collingswood Middle School, and another to the pre-k program at Zane North Elementary–and sometimes crawled into bed right after she got home.

“It was exhausting,” she said. “A lot of things didn’t get done.” 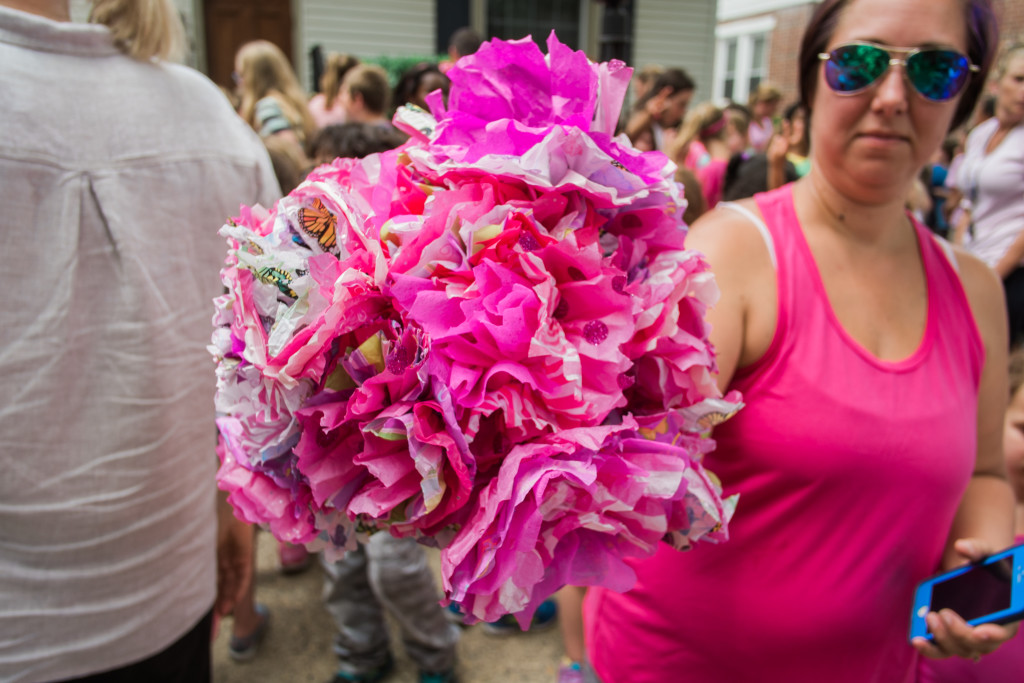 Chemotherapy ended in January; Schell had surgery in February.

Although the cancer did not spread throughout her lymphatic system, recovery from her radiotherapy was as taxing as it could be.

Today she is cancer-free, but Schell has battled infections, liver damage, and is still fighting to recover from chemo-onset congestive heart failure.

“Every problem, every side-effect, everything you can imagine that could go wrong has gone wrong,” Schell said.

Distributed throughout Connecticut, Missouri, and California, Schell’s family flew in when they could. But most of the day-to-day help that she got came from the neighborhood. To recall every bit of support she received would inevitably do someone an injustice, Schell said; and yet there are many prominent examples that came easily to mind. The paid cleaning service that kept the house together. Envelopes of gift cards. The cooler in front of her house that was stocked with meals from August through February.

At Christmas, Collingswood Manor donated the proceeds from its Giving Tree to the family, and showed up at their house with a van full of Christmas gifts; “way more than I could ever put under the Christmas tree,” Schell said. Wittmaier Plumbing donated $5 from every invoice throughout the holiday season. Her Barrington church community chipped in.

The latest gesture came Friday, when Schell went to buy her family pass to Roberts Pool at Collingswood Borough Hall, and was told, “You don’t need to do that.” Finally, on Monday afternoon, 120 kids spilled onto her property with bouquets of paper flowers, a secret the entire school had managed to keep even from her own children.

“It was overwhelming, heartfelt, compassionate,” Schell said. “Even this morning, I’m still thinking this through. You hear so much about the Common Core, and the PARCC testing, and the problems that they deal with behind the scenes. It must be so overwhelming, [and then]during the busiest week of the year to take the time to do this.

“My kids are going to remember this when they’re 25 years old,” she said. “All I’ve heard since then, [from]my family and friends throughout the country, [is]that this wouldn’t happen anywhere else,” Schell said. 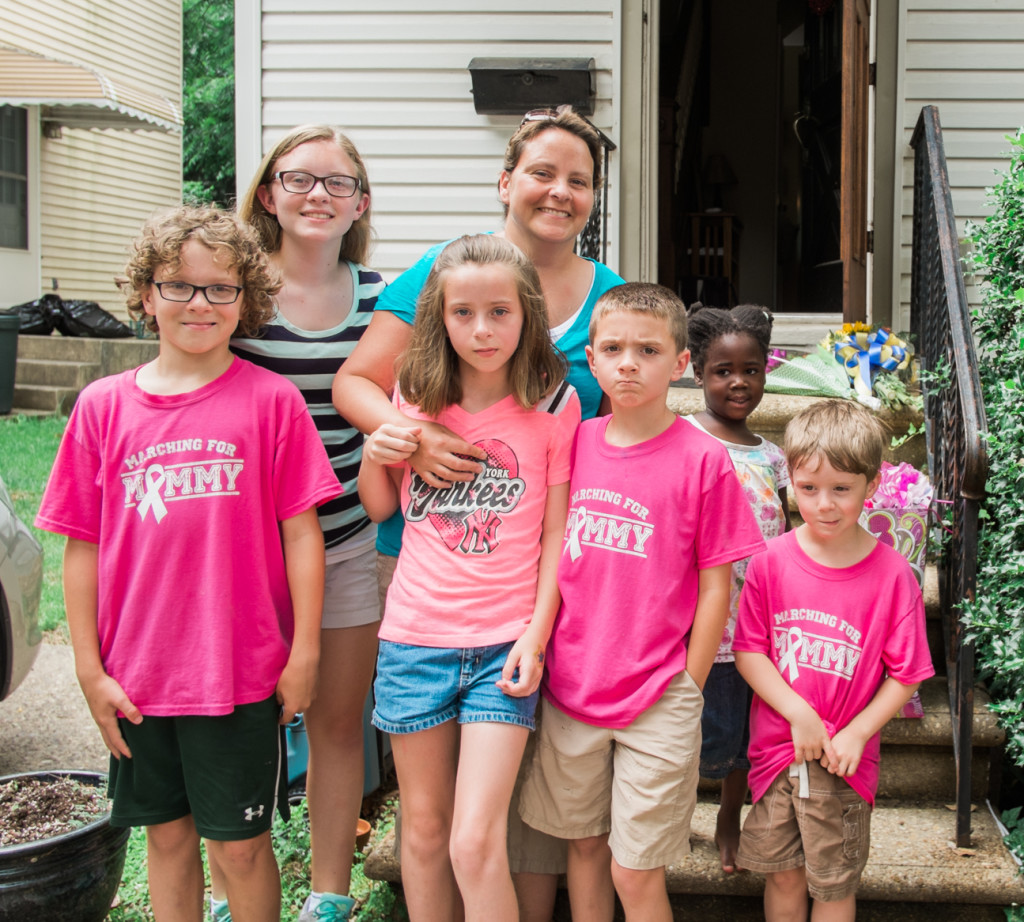 ‘It was so easy to give back to her’

Not only did her family survive the year, Schell said, but the public school environment in Collingswood gave them stability, structure, and comfort.

She never heard her children use her illness as an excuse for not getting their work done; never heard them complain about the struggle.

“They not only survived,” Schell said; “they thrived.”

“There were a lot of times they would come into my room and they would kiss me goodnight,” she said.

“There were times when I thought they were all in bed,” she said. “I would be in bed crying, and my kindergartener came and rubbed my back and told me, ‘It’s okay, you’ll be all right.’ My one fourth-grader said, ‘Cancer’s not so bad.’ I said, ‘Well I’ve got him fooled.’”

Fourteen-year-old Kate Schell’s poem, which Kristin shared on her blog, recollects “Last August” as being “full of doctor’s appointments/and long phone calls behind locked doors,” “tast[ing] of lasagna every night/from compassionate neighbors,” “full of sleepless nights and endless questions…clumps of hair on the bathroom floor/and an afternoon of wig shopping.”

“Their kids are beautiful children,” McPartland said. “She’s always been a champion for our school. It was so easy to give back to her.”

“I cannot ever remember Kristin having a woe-is-me moment,” McPartland said. “She kept a blog. When you read her entries, you think, ‘Somebody going through this, how can they continue to have such optimism?’

“We wanted to find, in the end, a moment to mark that the end of the school year was here, and a brighter summer was here.”