Trending
You are at:Home»People»Inclusion by Introduction: Oaklyn Neighbors Discuss Life with Disabilities

To help familiarize children with the barriers in the lives of their disabled neighbors, the leaders of Girl Scout Troop 30148 hosted a meet-up at the Oaklyn Baptist Church where no question was off-limits and no voice went unheard.

From the moment she was born, Oaklyn resident Tracy McHugh-Goldman was battling long odds. Born with spina bifida, a neural tube defect that kept her spine from forming properly, she’d never be able to do a lot of things, doctors told her parents.

Racing a Pontiac Trans Am wasn’t the only thing on that list, but it was probably somewhere towards the bottom. Carrying a healthy pregnancy to term might have been above it, but not by much. Maintaining her adult independence, a career, and a marriage were also far-removed from the minds of doctors who pioneered a 27-hour laser surgery on her infant body some 37 years ago.

“They said I wasn’t going to be able to do anything but lift my head and gurgle,” McHugh-Goldman told a room of girl scouts and their families.

Gathered in the basement of the Oaklyn Baptist Church on a rainy Saturday, Troop 30148 watched as their neighbor demonstrated her wheelchair, leg braces, and the transfer board that helps her get in and out of cars. They listened as she described growing up in a big family in a small town, carving out a place for herself in both. Today she is an advocate for spina bifida patients.

“My body might not be the best, but there’s nothing wrong with my brain,” McHugh-Goldman said after her talk. “As long as I have a voice, I’m going to use it.” 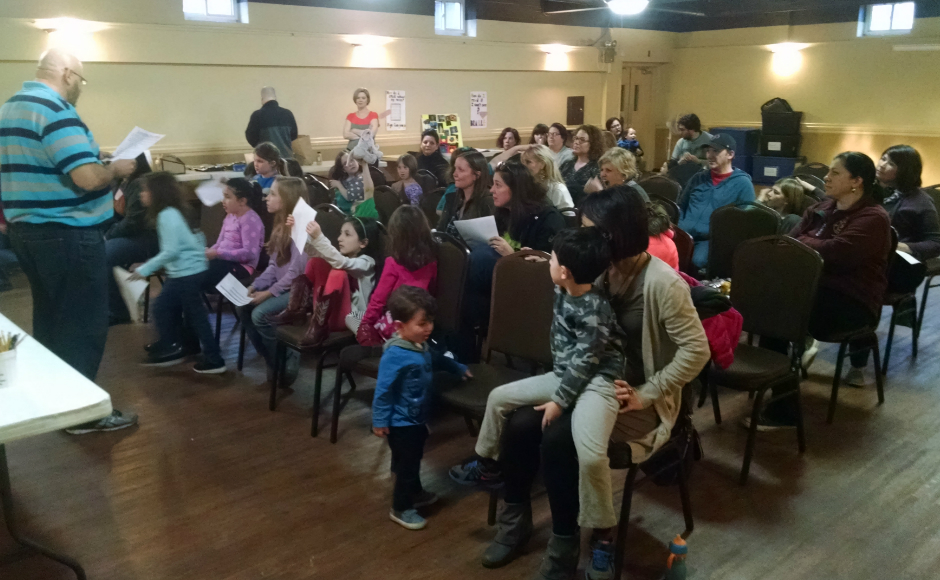 Girl Scouts and family gathered in the basement of the Oaklyn Baptist Church to hear about living with disability from their neighbors. Credit: Matt Skoufalos.

For scouting co-leaders Amy Rothberg and Candice Stutzman, that message is exactly what they hoped their troop would take home from the workshop.

Eight speakers volunteered to introduce children to the realities of living with Down syndrome, spina bifida, learning disabilities, and autism. Their intention was to help the kids become familiar with how different people get by—and how many of them do it daily in their own community.

The girls in the troop are “at an age where they’re just starting to learn to be nice to people” as well as “an age where they start making fun [of others],” Stutzman said. She hopes exposing them to people with different needs and abilities will head off some of that negative behavior.

“When we take the girls out and they see somebody who’s a little different, [it’s important that] they’re not pointing and giggling and making fun,” Stutzman said. “If I see any of those kids make an effort to be somebody’s friend, then I [will]think we[‘ve] succeeded.”

Rothberg, who works in early childhood development, founded the troop as a way to help her own daughter get more social engagement. She said the community has been “all positive” in its support of their efforts.

Fostering a supportive community is only part of the recipe necessary for special-needs kids to have success; as advocates and role models, family must play a larger part. McHugh-Goldman described both responsibilities as critical for parents in contributing to their children’s emotional and behavioral development.

“I didn’t notice how different I was with the support system I had,” she said. “[My mom] was everybody’s mom at DuPont. She and my dad would make sure I had all the holidays.”

But when it came to getting her daughter integrated into the neighborhood, Terri Goldman said play dates could be hard to come by. Parents were afraid of hosting a child with special needs because they didn’t want the responsibility. Goldman blamed a litigious culture that she said made families afraid of being sued over any of the typical things that might happen when kids get together. 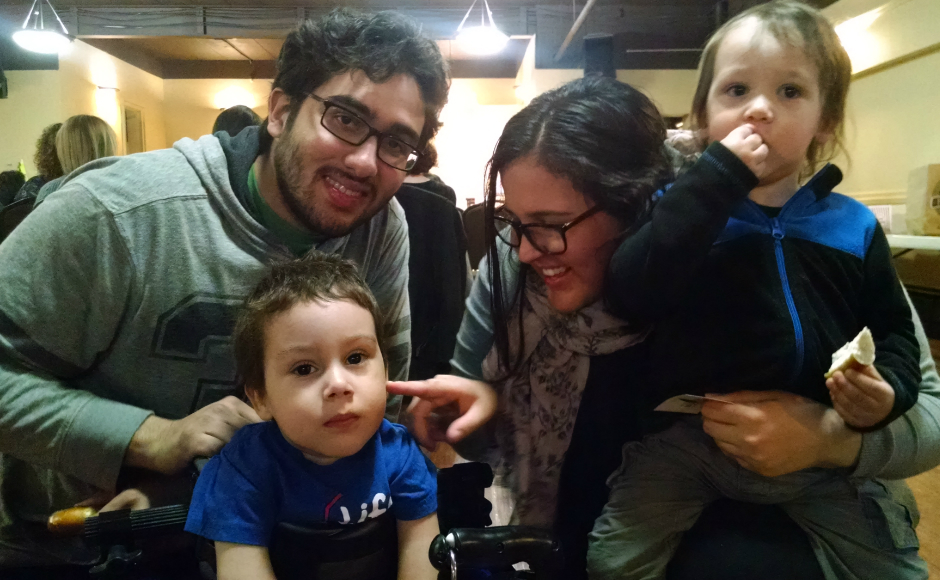 “People were afraid [to let her come over to play]because everywhere you turned, there was a lawsuit,” Goldman said. “I wanted her to experience everything another child experienced. Sometimes there were hospital visits.”

Having experienced the effects of that parental anxiety first-hand, McHugh-Goldman said it only serves to make other children concerned where they might otherwise not be.

“The kids don’t see anything,” she said. “If [parents]breed fear into them, it only breeds ignorance.”

Even when parents have all the information at their disposal, their resolve is frequently tested. Adam and Abigael Morales have two sons, Jonas, 2, and Julio, 1. Like McHugh-Goldman, Jonas was born with spina bifida. Abigael Morales delivered Jonas at Children’s Hospital of Philadelphia, where he had his first surgery at only two days old. She said doctors advised her to abort the pregnancy; told her that her son would never be able to walk, and that he would have learning disabilities. Instead, she is raising a cheerful and engaged toddler whose upbeat attitude is unhampered by his medical needs.

“People who meet Jonas say he has a character that people with his condition shouldn’t have,” said Adam Morales. “He’s very joyful.”

Maintaining their optimism in the face of constant worry and the financial strain of keeping up with the costs of health insurance is something else, however. Stories like McHugh-Goldman’s are a source of strength.

“We always had hope,” Abigael Morales said. “Doubt has existed. When we see somebody like Tracy, it gives us motivation to keep advocating for [Jonas’s] rights.

“He’s the hope but she’s the motivation,” she said. “It’s not impossible to raise a child with disabilities.”

For Adam Morales, the most important thing is that Jonas and his peers are raised learning to respect the differences they see in others.

“A lot of kids grow up with thoughts about kids with disabilities; that they’re outsiders,” he said. “It’s important for this generation to come up not thinking this way.” 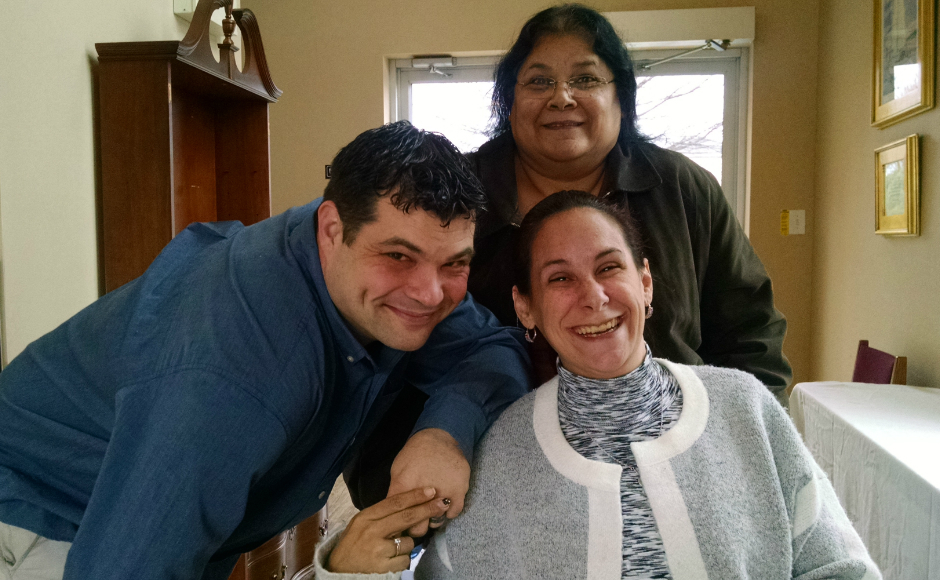 The way that changes is through one-on-one experiences, said Kim Brooks. Saturday’s meet-up helps kids see her daughter, Zoe, who has Down syndrome, doing all the same things they do. In turn, Zoe gets to practice communicating and being understood, advocating for herself, and meeting people in her community.

“What makes them get it is seeing a person like Zoe going to class, side by side,” Brooks said. “It helps her to not be frustrated; it teaches patience for people who are different. We’ve been trying to make her self-advocate as much as possible. People in the community have to know her.”

Wrapping her talk with the scouts, McHugh-Goldman related detail after detail of how she’d defied the expectations of the doctors who helped her live with spina bifida. She also described how often being judged against those expectations was a challenge unto itself.

“When I used to go out in my wheelchair, I would become a hermit,” McHugh-Goldman said. “People would stare.”

From the middle of the room, a tiny voice piped up.

“It doesn’t matter how you look,” the child said. “It matters who you are on the inside!”